Restaurants, French Lower West Side
3 out of 5 stars 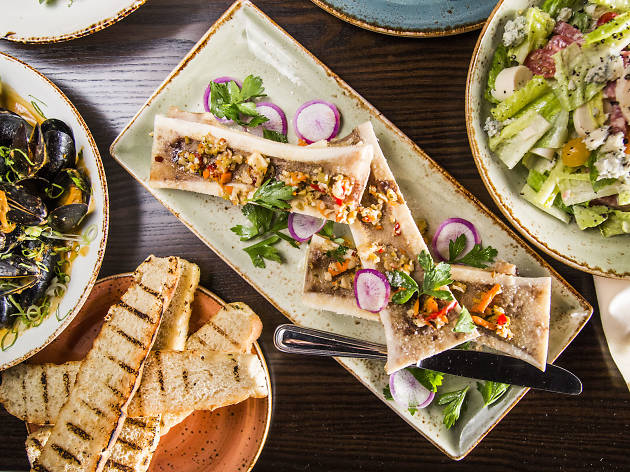 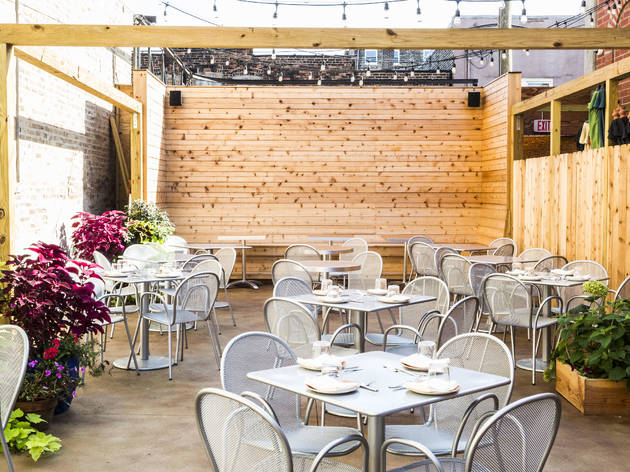 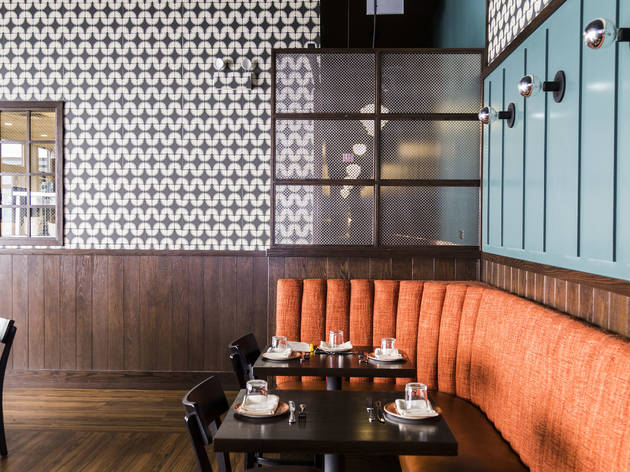 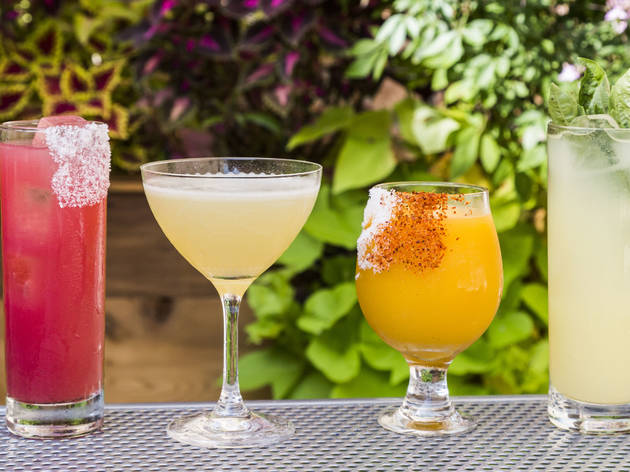 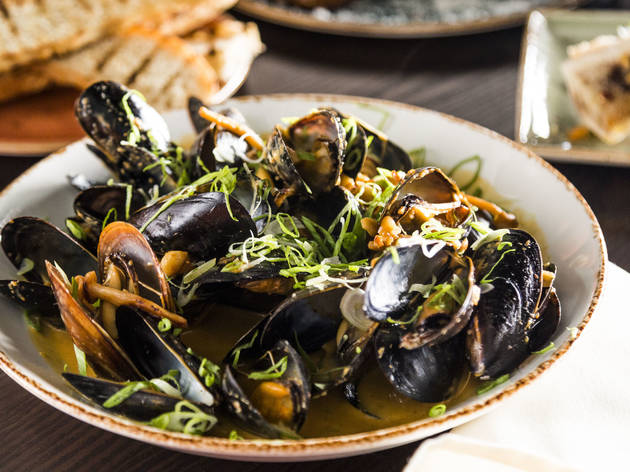 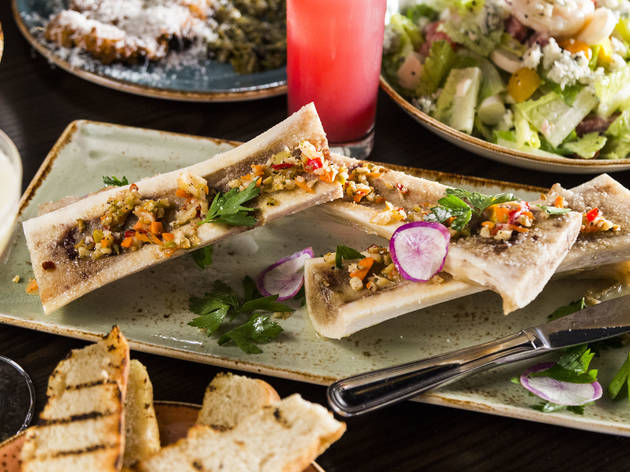 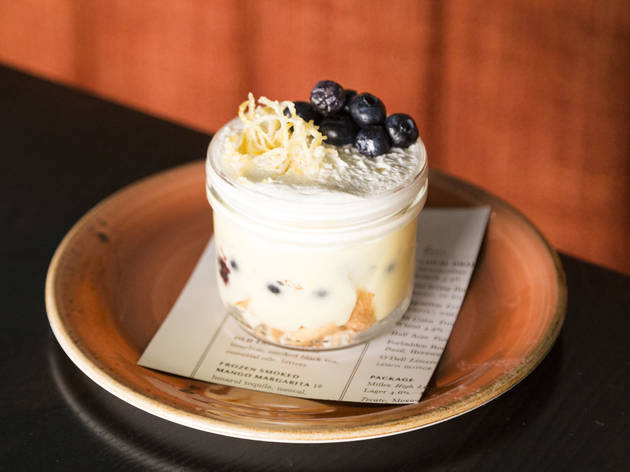 Pilsen’s newest barstaurant draws you in with its sprawling patio and keeps you coming back with delicious cocktails and crowd-pleasing fare.

Sometimes you just need a regular bar. Not a sceney, precious cocktail den, or a sports bar with 100 flashing TVs. I’m talking about the come-as-you-are third place, where you stop to catch a baseball game over a round of beers, or grab a hearty dinner and stiff cocktails after a long-ass day. A few menu misses aside, this affable Pilsen newcomer ticks most of those boxes, and raises them one impressive patio.

The restaurant’s namesake is co-owner Margi’s aunt, a social worker who taught at Loyola University and was active in Cesar Chavez’s 1960s farm worker movement. She also acts as the muse for a spot aiming to honor the ’hood’s historic diversity.

In the weeks since Monnie Burke’s opened, I’d heard tell of the coveted back patio, a roomy 180-seater draped in bald-bulb lights and dotted with planters. So despite a misty, late-summer chill hanging over the city, my date and I couldn’t resist dinner al fresco. Not 30 seconds after I settled into the cold metal chair, a smiling server appeared holding two large blankets. “Green or blue?” he asked.

Bundled to our chins, we decided it was still summer enough to start with the frozen smoked mango margarita. Mezcal, tequila and a dribbling of bitters grounded the juicy sweetness of pureed mango in this velvety textured sipper. In the beguiling Rare Tea-Ki, the honeyed sweetness of chamomile syrup softened the bright punch of lime and pronounced ripe fruit funk of Jamaican rum.

Far and away my favorite dish, though, was the black mussels, which I will no doubt order as an entree next visit. The tender, just-cooked bivalves bobbed with meaty wood ear mushrooms in a savory lemongrass-scented red curry broth with a refreshing top note of lime. We dunked more toasted ciabatta in the silky broth, fishing for shell-absconding mussels.

A chicken schnitzel roughly the size of New Jersey was the first of our two entrees. The meat itself was impeccably fried—juicy inside with a golden breadcrumb jacket seasoned with dried woodsy herbs. But an assertively salty, oily bed of charred scallion salsa verde and Sicilian capers overwhelmed the dish, the lily unnecessarily gilded with a fried egg topper.

I mostly avoid burgers in reviews because they’ve become passably indistinguishable—thin, diner-style griddled patties with dijonnaise and pickles. But reading the “grilled prime cheeseburger” descriptor on Monnie’s menu conjured hope of a heftier, burger burger. Sadly, the medium patty verged on well done, with an oozing square of mild butterkase and griddled red onions offering little in the way of moisture or tang to offset the dryish beef. Still, we had zero complaints about the accompanying heap of battered, seasoned frites.

We finished on a high note with a small jar of key lime trifle that alternated layers of sharp citrus curd with creme fraiche and blitzed nilla wafers, topped with fat, tart-sweet blueberries.

As we waited for our respective Lyfts out front, a foursome meandering up 18th Street stopped at Monnie’s entrance. “When did this open?” one mused. They went in and promptly marched through the now-mostly empty restaurant to the patio, still brimming with life despite the persistent drizzle.

What to eat: The shareable dishes are where Monnie Burke’s shines: Try the sumptuous bone marrow with giardiniera, silky red curry mussels and hearty veg plates and salads.

What to drink: From crushable draft palomas and frozen margaritas to compelling spirit-centric martinis and tea-scented old fashioneds, Monnie Burke’s pours terrific cocktails topping out at $12.

Where to sit: The roomy patio, as long as the weather allows. The spacious bar with high-backed leather seats is a comfy spot to catch a game, or for a more intimate vibe, nab a low-lit booth along the wall.