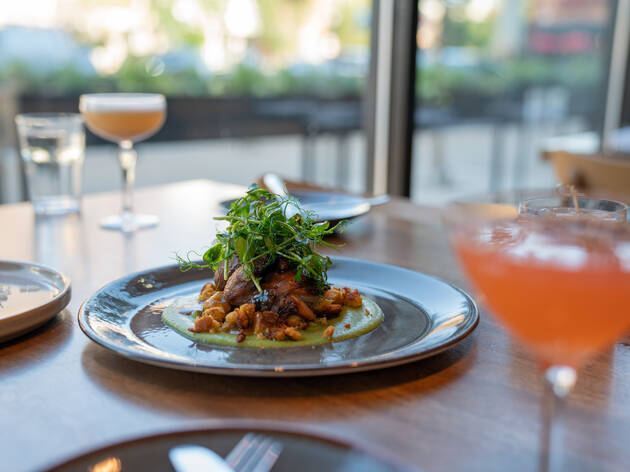 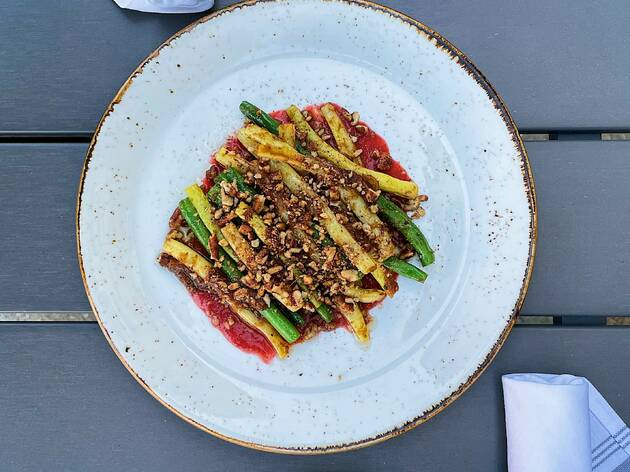 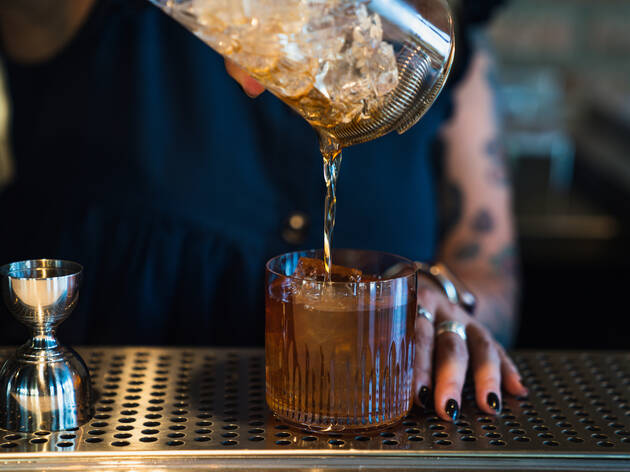 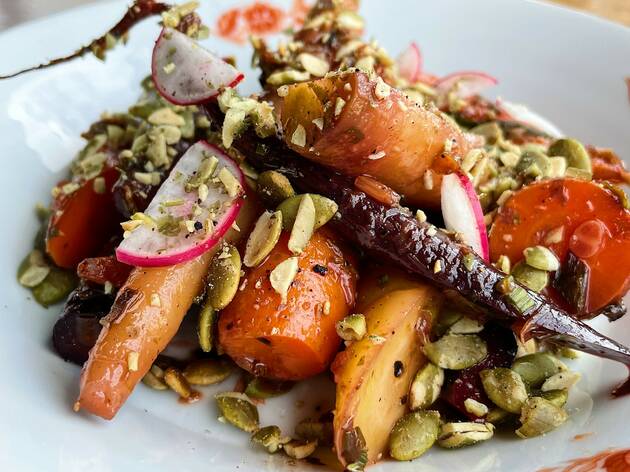 I’m not normally the type of person who gravitates toward beef tartare, but the version of the dish offered at Parkside—a new restaurant from the folks behind the specialty grocery store L&M Fine Foods in North Center—might make me rethink my raw meat squeamishness. Instead of its traditional preparation, in which ground beef is topped with raw egg yolk, the dish arrived at my table in a cloud of cured egg yolk and white cheddar shavings, with pieces of tender beef in tallow chimichurri and brackish pickled mustard resting on a hashbrown disc. It's sort of like the platonic ideal of the kind you’d find in a McDonald’s breakfast meal—and probably nothing like what's accompanied the beef tartare you’ve had at more buttoned-up establishments.

That unstuffy, slightly unusual treatment of the dish is characteristic of Parkside, which takes a self-professed “playful” and ingredient-driven approach to American cuisine. Led by chef Justin Kaialoa (The Bristol, Violet Hour), the ever-evolving menu shifts based on seasonality, which can include minute adjustments. For example, on the night of my visit, an appetizer of duck prosciutto came with slices of September honeycrisp rather than its usual artichokes.

I’d recommend grabbing a tipple from beverage director Allassandra Ventola’s cocktail menu (developed with BLVD and Rose Mary’s Robert Shamblin) while you browse dinner options, because orders are placed all at once and coursed out—a somewhat hefty decision-making process right from the get-go, if you're as indecisive as I am. The Blood & Honey cocktail, an ombre blend of scotch, tawny port and ginger, provided some fortitude as my date and I picked out the requisite number of dishes (for two, anywhere from three to five plates).

Still, the rest of my meal, though well-executed and dutifully playful, didn’t stick in my thoughts post-dinner quite so much as the beef tartare. A raft of West Coast oysters, buttery and saline, went down easily when topped with a smear of fresno hot sauce and peach-and-ginger mignonette, while the tea-smoked Cornish hen—our largest entree of the night—took on a maple smokiness from its brine of sweet tea. The second most exciting part of the meal was the evening’s dessert, It’s Your Birthday, a delightful little tea cake dressed up with saucy berries, popped sorghum and sea salt ice cream that was made even nicer by the espresso martini I drank alongside it.

All this was pleasant, if not entirely memorable: Each dish felt solid, reliable and not unlike the restaurant’s many, many compatriots making similar food in the broad field of American cuisine. Will I be dreaming of my meal at Parkside? Probably not—well, perhaps I’ll dream of that beef tartare, when the mood strikes—but I’d doubt I’d ever be left disappointed if I returned. And even if I were, there’s always next season.

The vibe: My date and I opted to sit at the restaurant’s plant-thronged patio, but you’d do just as well to sit inside, which provides equally pleasant views of that bustling strip of Montrose and Lincoln amid low-backed leather benches and capacious bar seating.

The food: Funky takes on American cuisine with some Southern influences. Order small plates to share or opt for an appetizer and separate entrees, which are large enough to fill each person up.

The drink: You could spend the whole night waffling between the 50-bottle wine list, mostly local draft beer selections and the cocktail menu. Even so, you can’t go wrong with a pre-dinner cocktail and a bottle to split once your meal arrives.

Time Out tip: 1. Save room for dessert! And if you absolutely can’t eat anymore, at least opt for a cold brew-spiked espresso martini. 2. Watch out for a brunch menu, which the restaurant plans to launch sometime soon.