Restaurants Lower West Side
Recommended
5 out of 5 stars 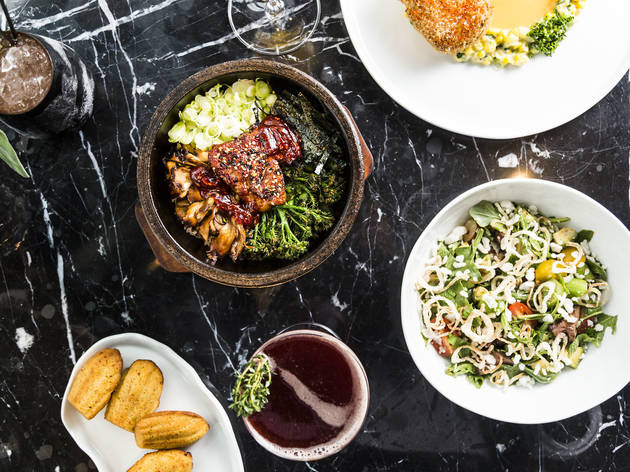 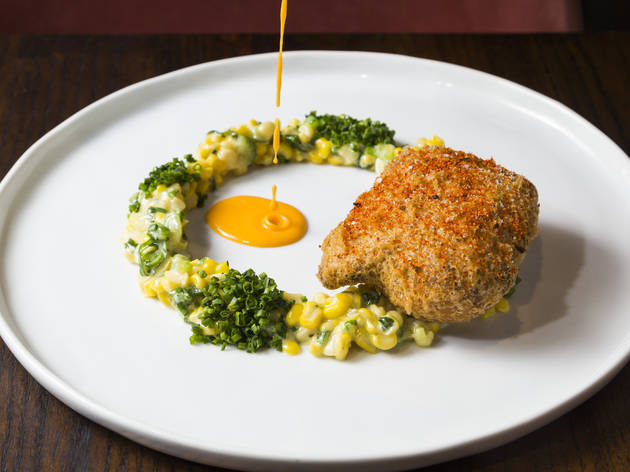 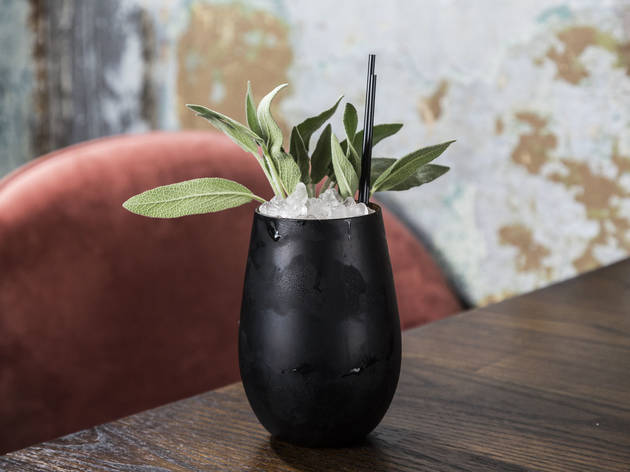 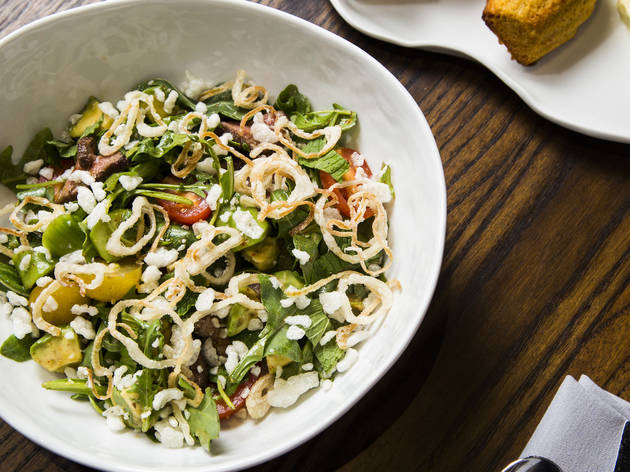 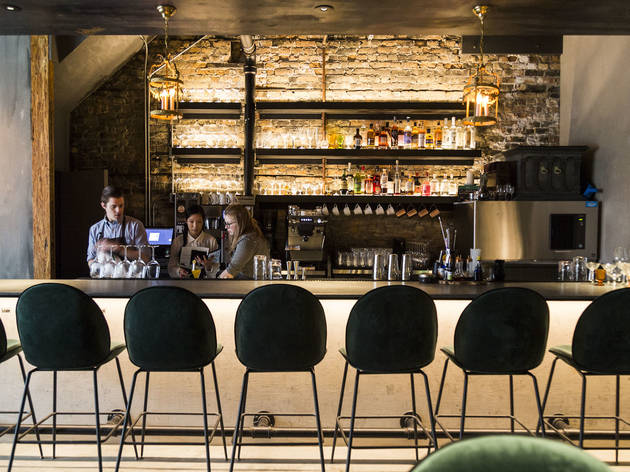 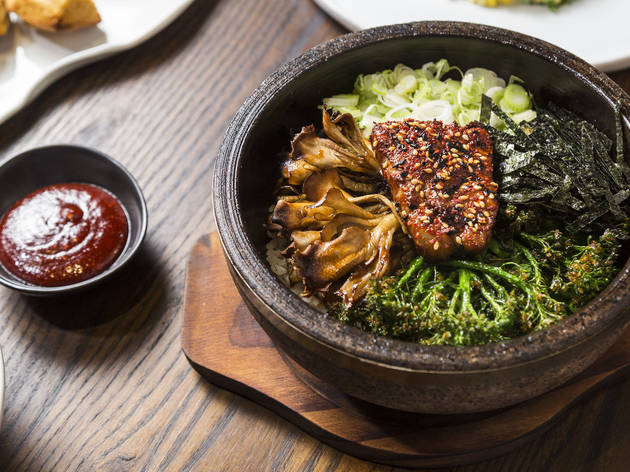 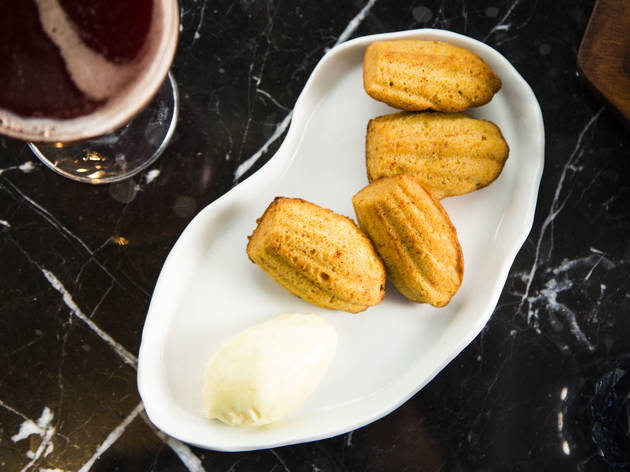 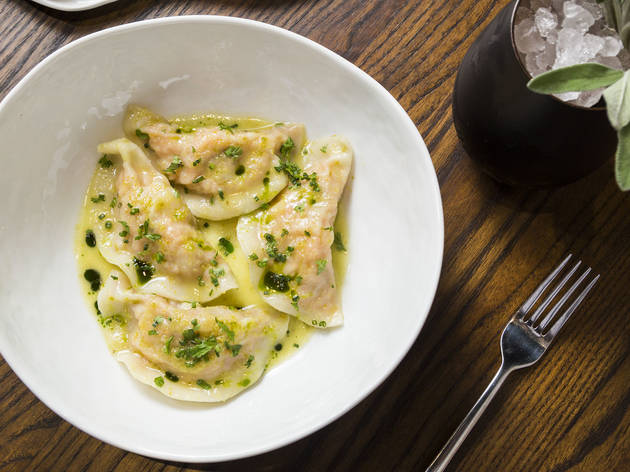 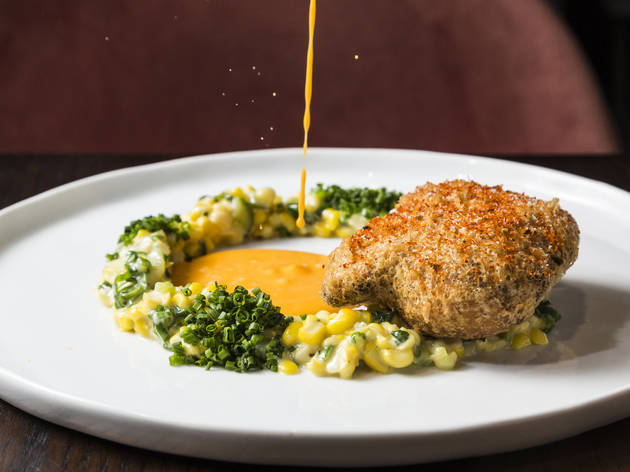 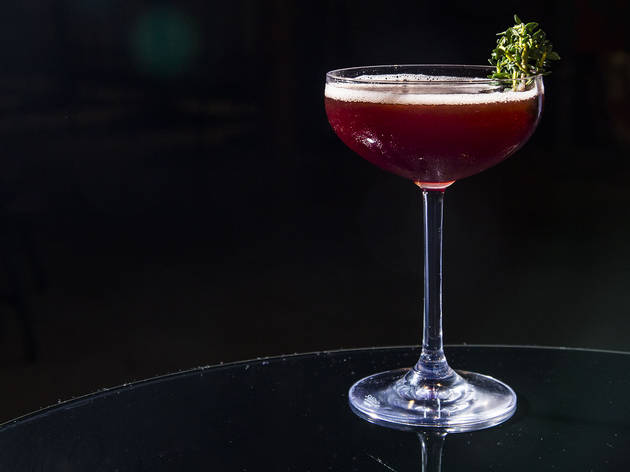 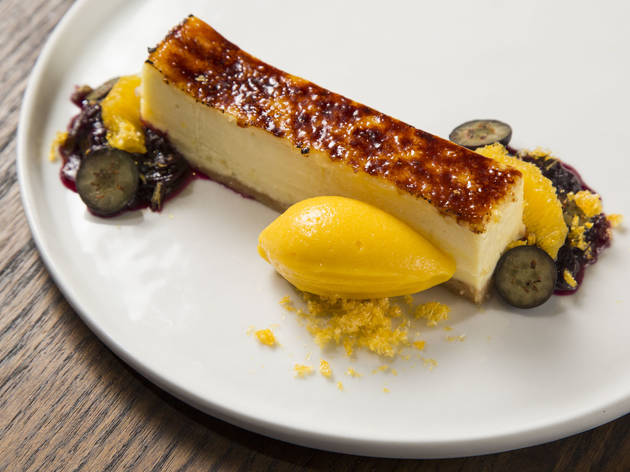 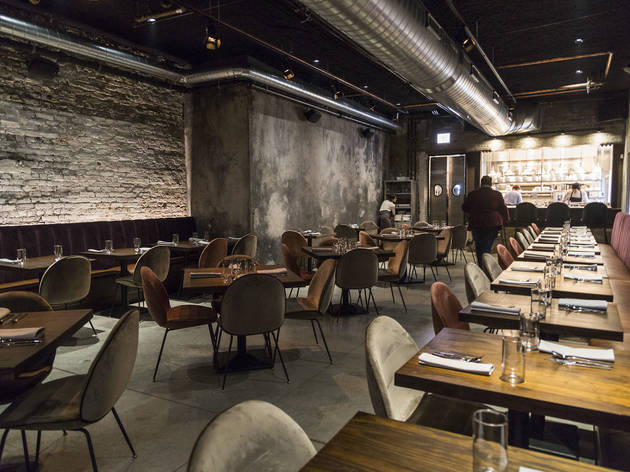 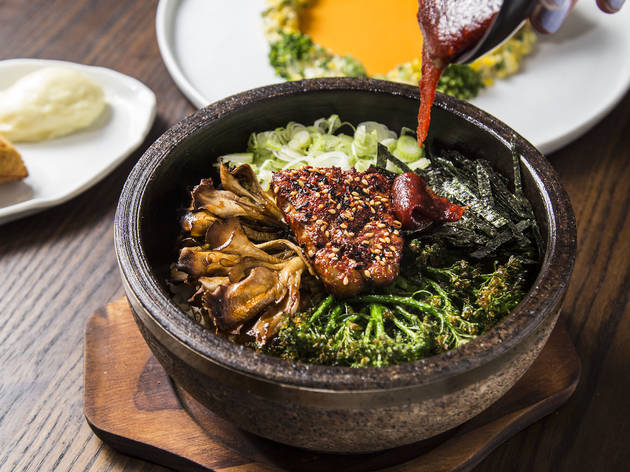 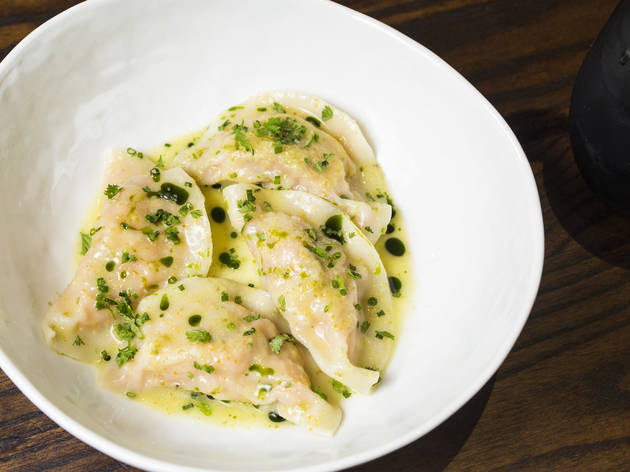 Chef/owner Stephen Gillanders wows with craveable, Asian-inflected dishes at this handsome Pilsen newcomer that pulsates with warmth and generosity.

Something awkward happened just after the craggy, golden-fried chicken thigh arrived at our table at S.K.Y. The meat was propped up on a ring of sweet creamed corn, and a beaker of bright orange hot sauce sat expectantly in the center of the plate. The server glanced from my date to me. “Shall I pour the sau—”

“Yes!” I interrupted, nearly launching out of my chair. As the sauce pooled into its creamed corn barrier like magma, my date brought a sense of civility back to the conversation with a well-timed remark about last seeing a beaker in middle-school science class. In all fairness, though, I wanted that chicken in my mouth as quickly as possible.

Lacy, tempura-like crust crackled audibly at the suggestion of my knife, revealing succulent thigh meat imbued with garlic and Korean chili flake. I dragged my forkful through the fiery lake of fermented habanero-vinegar hot sauce, scooping up bits of the creamed corn dam as I went. The resulting bite was a textural, irreverently American jumble of tangy heat, umami and sweetness.

The entire pan-Asian menu at chef/owner Stephen Gillanders’s first solo venture—named for his wife’s initials—reverberates with a similar alchemy of meticulous skill, humor and heart. Aromatic, nuanced cocktails and craveable desserts make this striking Pilsen newcomer a must.

Walking in, you can easily imagine the window-filled space flooded with natural light by day. At night the dim, bluish-hued room envelops you like a snug wine cellar. We walked by the small lounge overlooking 18th Street, past the berry-toned bench seating that runs the length of the space and into a minimalist back dining room filled with wood tables and velvety custom chairs.

The menu breaks out into snacks, hearty appetizers and mains; sizable portions make sharing all but intuitive, particularly if you’re in a pair. We began with the cornbread madeleines—fluted, gritty shells encase a meltingly moist interior thanks to batter that incorporates pureed fresh corn with the cornmeal and a heavy hand of butter. “They’re better than my mom’s cornbread,” our server sighed. “I haven’t told her.”

“It needs something,” my date puzzled. “Acid? Umami?” I, on the other hand, don’t know when I’ve appreciated lobster’s oceanic sweetness more.

Bar manager Chloe Lindstrom’s six cocktails reminded me why aroma is so fundamental in drinks, too. A thick lemon rind flower garnish delivered a clean burst of citrus before each understated sip of the Seon Daze, which combined lightly floral sake, vermouth, lemon and sunny turmeric. Two fat thyme sprigs infused the Synesthesia, a juicy blend of cassis, amaro and vermouth with a woodsy backbone.

Throughout the meal, my date and I paused periodically to listen for the collective chants we’d noticed emanating from the kitchen. “Scallops!” “Lobster dumplings!” “Thai steak salad!” More than a verbal confirmation of each order coming in, Gillanders calls the chants a “continuous ping of energy” that helps calm the oft-frazzled pace of dinner service and return everyone to the same wavelength.

A muffled “Mmm” became our own little incantation as we plunged into Thai steak salad—a beautiful melange of peppery arugula and cooling mint, toasty puffed rice, frizzled shallots, cherry tomato halves and cold slabs of rare beef—unified and uplifted by the salty pungency of fish sauce, garlic and lime dressing.

Determining that pastry chef Tatum Sinclair’s desserts were required eating, we doggy-bagged over half the bibimbap. Its seared foie gras topper might seem to gild the lily in this already-flavorful jumble of earthy mushroom bulgogi, nori, scallions, charred Chinese broccoli and crispy-bottomed rice. But the duck liver’s elegant richness rounds each component as it dissipates. A dab of the accompanying thick-as-tar gochujang—heady with chiles and salty fermented soy—would’ve gone a long way, but I was in no mood for moderation.

The cheesecake, with its torched top and soft custard filling atop buttery shortbread, betrayed a lovely kinship to creme brulee—its creaminess thankfully offset by wine-cooked blueberries and tart, freeze-dried mandarin oranges. But the sleeper hit was an unceremonious little bowl of what looked like pebbles. It was actually hand-cut granola with pistachio, olive oil and bittersweet bursts of cocoa nib obscuring a dense budino with a base of caramelized bananas foster.

For a brief moment mid-budino, our synchronized “Mmms” matched up with the kitchen’s chants like a singular, meditative incantation.

What to eat: Two snacks, an app and two mains will satisfy a hungry pair. Must-orders include the fried chicken with fermented hot sauce, Thai steak salad and the lobster dumplings. Don’t sleep on the unassuming banana budino.

Where to sit: Ease into your night with a drink in the sexy lounge. If you’re in a twosome and aiming for intimacy, request a standalone two-top along the dining room’s left wall.