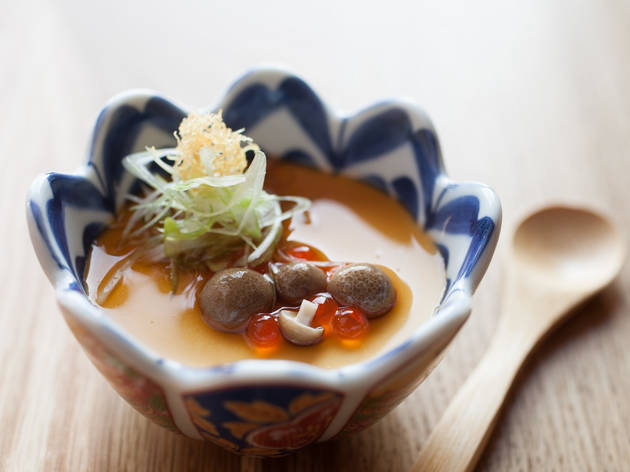 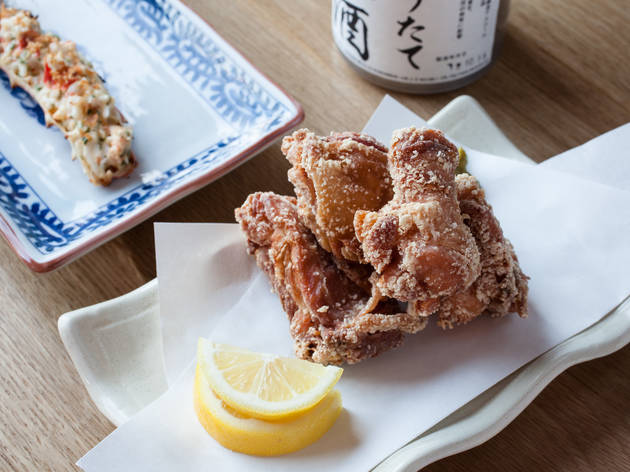 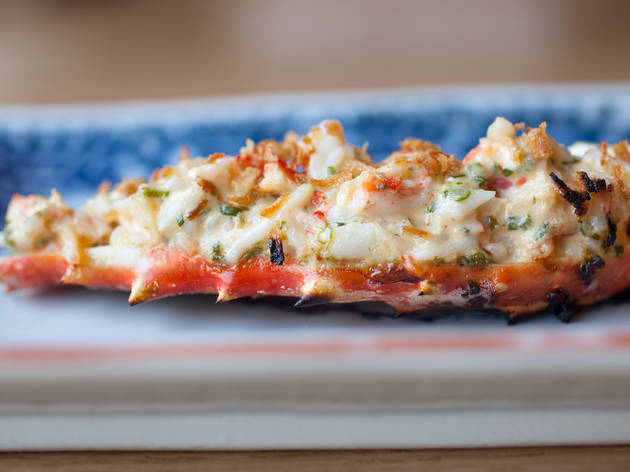 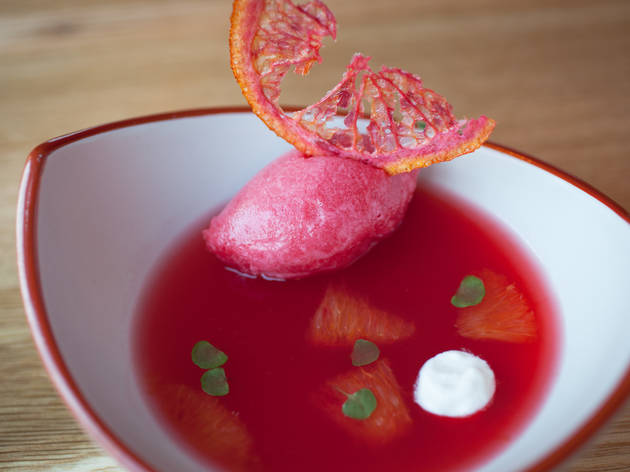 Sumi Robata is a food writer’s nightmare—or maybe just this food writer’s nightmare—because the food is deserving of gushing praise, and yet this food is so simple there’s almost nothing to say about it. It’s so simple, in fact, that I wonder how Gene Kato, the chef/owner, plans to keep himself awake night after night. Currently the guy stations himself at the coal-burning robata grill and swiftly cooks one skewer after another, sending them to the table as they’re ready. (Sometimes this means nothing more than reaching his arm and handing it to the customer, as about half the seats in here are bar seats that face an open kitchen.) There’s certainly enough for Kato to cook, because Sumi tells diners they should order about eight small plates per person (a recommendation that doesn’t always turn out to be wise). But nothing spends a very long time on the grill, so it seems as if Kato has given himself an especially repetitive job: Grill. Flip. Grill. Plate.

He’s quite good at it, as the final products prove. Strips of chicken thighs exhibit pools of juice on the surface. Cubes of skirt steak have a crisp, crusty exterior and juicy, meaty centers. Salmon has ribbons of fat that keep it moist, and since each skewer boasts what is almost an entire salmon filet, it can easily be shared by two people. The miso-marinated lamb ribs, though, are completely unshareable, and so craveable that you should probably order two per person and resign yourself to be seen shamelessly sucking on the bone.

Appetizers are really the same size as the robata items, and in fact they more resemble entrées—these are where the composed plates live, and the flavors here have more layers. A salad of shaved burdock root is sweet and earthy. Tiny squares of bluefin tuna are dressed with soy, yuzu, avocado and crispy shallots, a tiny plate that is all things: creamy, crunchy, tart and salty. A poached egg with a vibrant, thick yolk is a beautiful thing, set into a bowl with tiny mushrooms and a broth that, unfortunately, overpowers the dish with its flavors of soy. Sliced, smoked duck breast is served cold with a very spicy Japanese mustard; it is as tender and meaty as the world’s best pastrami. I wanted to pile it on rye and eat it as a sandwich.

The fried chicken is, a server told me, one of the restaurant’s best-sellers, and indeed I had it twice—on both of my visits my companion insisted on ordering it. The tiny pieces have a light coating of batter, vaguely reminiscent of tempura, and the meat inside is juicy. But fried chicken seems like a brash dish to focus on in a restaurant where so much lovely subtlety exists. I’d take the ishi yaki, thin slices of strip steak cooked at the table on a hot stone, over the fried chicken any day. If I were forced to eat something rustic, I’d do the slider—an incomprehensibly delicious sausage nestled into a bao bun that’s much more hot-dog-like than burgerish.

The small, quiet style of Sumi also makes dessert—so often a loud course—seem out of place. But one night I sat at the bar right in front of pastry chef Moé Kobayashi and watched as she poured ganache over a thin rectangle of chocolate cake again and again, so many times that I couldn’t not order the dessert, which was a special. Her chocolate-filled doughnut with a bowl of green tea mousse is a nice ending, and her no-crust apple pie is pleasing enough (though, to the point of one of my coworkers, wouldn’t it have been better with the crust?). But the chocolate cake, spiced with togarashi, is what really exhibited Kobayashi’s talents. Like Kato, she seems able to take simple—and sometimes, overused—ingredients and turn them into a tiny package of something powerfully unique.