I have observed weekend lines to get into a bar called Fatpour, where I once shared something called a Fish Bowl with a man whose politics were as repulsive as the Sprite-based beverage. I have imagined—but never been brave enough to ascertain—what sort of things take place at the Shambles, that rare venue whose name appears to be an honest reflection of its ambitions. I have stood by idly as Crust gave way to Pizano's. I have learned what it looks like when the absolute minimum amount of effort is put into opening a bar, and the name for that is Paradise Cantina. (It closed.) I'm perfectly comfortable acknowledging that the gelato at that Caffe Gelato place is not very good, and that occasionally I go there anyway. What I'm saying is that I live here, just up the street from the strip of Division between Damen and Hoyne, and if I'm not at Rainbo or Small Bar, it can be a very dark place. Rarely does one encounter such a dense concentration of restaurants and bars, so few of which demonstrate even the minimum of aspiration. And then, the powers that be gave us Takito.

I can't help myself from mentioning that they gave it to us in a long, narrow room where I once had a meal I would rank among my ten worst in Chicago, at the questionable-at-best Sabor Saveur. But that only heightens the contrast between Takito and so many of its neighbors. In fact, if I have one bone to pick with this newcomer, it's that certain of its features (the faux-graffiti logo, the predominance of tacos on the menu, the tequila selection, the late-night hours) might lead one to infer that this is just another Wicker Park taco bar. Within about one bite of Carnivale alum David Dworshak's side of asparagus, I understood how deeply I had underestimated this place.

The spears of roasted asparagus were carefully placed over sauce-like, guajillo-flavored ricotta, dotted with bites of rhubarb pickled in a style akin to kimchi and crowned with a bunch of pea shoots. If this is a taco bar, it's one that's been kidnapped by Bruce Sherman. In fact, the tacos themselves, while delicate and original, are the least impressive things on the menu: The housemade tortillas are almost too fragile, breaking easily. And all of them, from my least favorite (the crispy redfish with too-sweet coconut custard) to the finer showings (juicy beef barbacoa, lamb chorizo with bright strips of jicama), greatly benefitted from a big squeeze of lime and a spoonful (or two) of the briliant avocado salsa verde we (fortunately) had remaining on the table. The salsas cost $3 (or $6.50 for all three) and come with oversize masa crackers that are perhaps most notable for...not being tortilla chips. It would be a risky move—if these things weren't the perfect balance between crumbly (signaling freshness) and firm (so as to adequately function as a vehicle for salsa).

The salsas, shared plates (like a positively delightful salad of hearts of palm, pickled jicama and crunchy sunflower seeds) and sides show Takito to be much more of a bonafide restaurant than bar, a characteristic cemented by the overly earnest service. And yet, you'd be silly to come here and skip the cocktails, which are the work of Adam Weber (formerly of Trenchermen) and are every bit as refined and nuanced as Dworshak's food: You can see it in the fine speckles of salt (as opposed to palate-numbing kosher salt) that rim part of the glass of the Takito Margarita, or in the spicy-but-smooth El Tamarindo, or in the way the Paloma somehow tastes more like grapefruit than any other Paloma.

Attention to seasonality marks the drinks as it does the the food menu, which is rife with familiar farmers'-market names like Three Sisters (polenta), Brunkow (cheese) and Maple Creek Farms (pork belly). Dworshak takes things so far that my favorite dish from my first visit (a carne-asada sope with clever Asian nods in the form of green-onion kimchi and sesame seeds) had disappeared by the time I returned. "I think people thought it was a soup," the server said, by way of explanation. You can take the terrible bars out of Division, but—well, I don't need to say it.

Written by Julia KramerTuesday May 7 2013
FacebookTwitterPinterestEmailWhatsApp 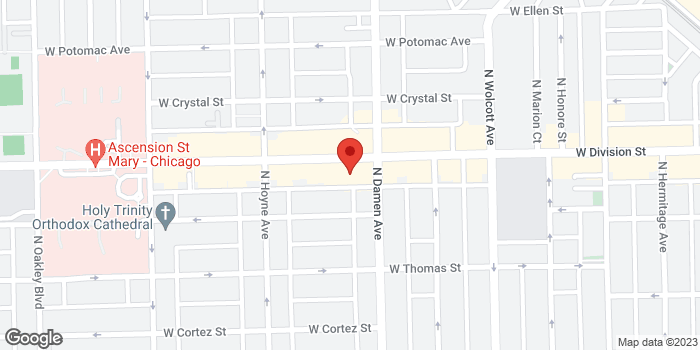