With anticipation and admiration, I watched as Ian Schrager reassembled the Pump Room.

Not exactly. Everything Schrager1 did after announcing that the new Pump Room would be a Jean-Georges Vongerichten2 restaurant left my mouth agape in confusion. I expected someone pretty well-established to be named Vongerichten’s chef—someone like Mike Sheerin, a Food & Wine Best New Chef. Schrager’s team instead chose Bradford Phillips. Who? Precisely. For a pastry chef, they selected Kady Yon, whose desserts at both GT Fish & Oyster and Perennial Virant were slammed. And yet neither of these decisions prepared me for the appointment that came next: Billy Dec3 was hired to be the Pump Room’s “consultant.”

There Dec was, tucked into a corner by the host stand on a recent Saturday night. It was 10:45; I was about to be seated after a 45-minute wait. Which was better than the hour-and-a-half the hostess quoted. Which was better than what the host had told me over the phone a week before, which was not even to try walking in, because the restaurant was fully committed. Which was after she told me no reservations were available. Schrager has said that Public marked his move from “exclusive” to “inclusive.” But it appears that if Dec’s not fielding e-mails from you, the Pump Room is kind of a bitch to get into.

However: It’s a fabulous-looking place, a room you should at least see if not dine in. The historic space, held sacred by Chicagoans, has been remodeled with a perfect balance of reverence and imagination. The tables are comfortably spaced, the gray-white color palette is elegant in its restraint, the modern globes of light reaching from the ceiling are a bold and memorable reinterpretation of the original Pump Room’s crystal chandeliers. And the seats are filled with people as dressed up as the room: a stunning waif in a yellow silk jumpsuit at one table, a quartet of grandparent-age Gold Coasters at another. On a Monday, the crowd is older. On a Saturday, it’s a little trashier. But the point is, there is a crowd. It’s the place to be right now, and in this sense, Schrager’s Pump Room is a remarkable success.

Just don’t order a cocktail. The gin fizz has the thin, milky taste and texture of a bad shake; the list, heavy on flavored vodkas, is geared toward those with an anthropological interest in how we drank in the ’90s.

And before you order dessert, I want you to think about something. On a scale of one to ten, how much do you love dessert? Because the higher you rank on that scale, the more disappointed you’ll be when Yon’s plates hit the table: the sub-Dunkin’ doughnuts, the two scoops of salted-caramel ice cream passed off as a sundae, the sad slice of marshmallow-topped chocolate cake, the wan “candy bar” paired with a quenelle of ice cream so icy I would pay to see Vongerichten taste it, and the not-warm “warm cookie plate” disaster that resembles a bad box of Christmas cookies.

The main menu, however, completely avoids such technical blunders. The secret of this food is its spice: It’s the toasty cumin seeds tying together the roasted carrots and dollop of sour cream in a salad—a salad!—that is the best dish I had at the Pump Room. It’s the sweet-spicy chili glaze that kept me coming back to the flaky, greaseless fried chicken. Garlic and jalapeño are at the forefront, imbuing a side of broccoli with a sense of purpose. This is Jean-Georges food, and Phillips is executing it without flaw.

But there’s more to great food than simply being free of errors. Certain dishes here are compellingly elemental: The toasts, whether topped with fresh crab or a thick coat of surreal chicken-liver pâté, are prime examples. But a lot of the food is simple to a fault. The whole-wheat mushroom pizza with an egg in the middle is inoffensive to the point of soporific. Same with the pretzel-crusted calamari. Pistachios add interest to a pesto pasta but not enough. These are the kind of stylish-but-soulless dishes I imagine Gwyneth Paltrow nibbling on, then GOOPing about later to her followers.

And that’s fine, because these would be perfectly okay dishes if not for the expectations that come with being a Jean-Georges restaurant, or to be more specific, a near-replica of Jean-Georges’s ABC Kitchen in New York City, which beat out Girl & the Goat to take home last year’s James Beard Award for Best New Restaurant. Perfectly okay—except for the Wiener schnitzel. There is so much that is off about this dish, from the springy texture of the meat to the undressed leaves of arugula to the inexplicable addition of dried cranberries. This is one of Jean-Georges’s tributes to the old Pump Room, but it actually comes off more as a backhanded fuck you, a genius way of reminding guests just how far this restaurant has come.

1 The hotelier who opened Studio 54, the man who may or may not have “invented” the boutique hotel and the concept of “lobby socializing,” the often T-shirted 65-year-old who envisioned turning the tired Ambassador East into the fresh-faced Public Hotel.

2 The chef last seen in Chicago opening an outpost of Vong (later reconcepted as VTK, later closed) with Lettuce Entertain You a decade ago, the French-born/Asian-influenced gentleman who oversees restaurants around the globe, the culinary mind most likely to have invented the molten chocolate cake.

3 The restaurateur behind clubby [node:148415 link=Underground;] and bro-y [node:148797 link=Rockit;], the dude whose name (fairly or unfairly) tends to appear often in the context of the words douche bag, the walking fashion hat who’s as attached to his smartphone as he is to his celebrity/athlete friends/clients. 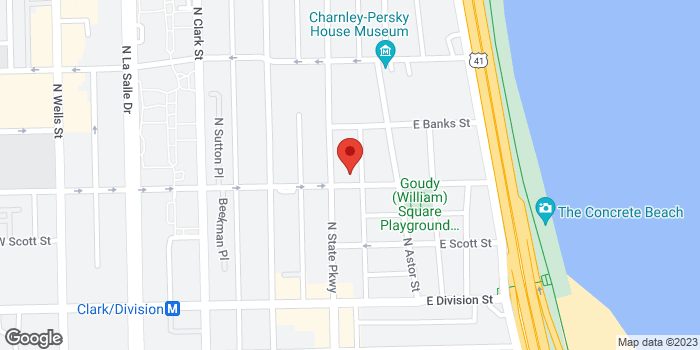