There are, on rare occasions, foods that transcend reference points, dishes that are immune to clichés, that feel fascinatingly, mysteriously new. These are plates that are beautiful to look at, but they are even more marvelous to eat, not so much experiments as proven theories of flavor. It’s a surprise to encounter food so animated and precise, and it is a wonder to do so here, at Trenchermen, a restaurant as handsome and classic as it is comfortable and low-key. The space lies just below street level, in what was built in 1923 as a Turkish bathhouse: The white-glazed brick wall of the bar room makes hanging out here feel a little like being in an Art Deco pool or a vintage boat, as reconstructed by someone schooled in the Japanese (or Danish) playbook of minimalism. That someone is Kevin Heisner, the designer who, along with Matt Eisler, partnered with brothers Mike and Pat Sheerin to open Trenchermen.

Mike gained national acclaim during his tenure as chef de cuisine of Blackbird; Pat kept a lower profile on the 95th floor of the Hancock Building at the Signature Room. Together with Eisler and Heisner, they’ve opened a restaurant that’s extraordinary by nearly every measure. The servers are uniformed in impeccable style: men in chambray button-downs; women in bold, workmanlike smocks. The staff seems pleasantly at ease (although the servers could use more familiarity with the small wine list). The pacing of the courses has a steady, even keel. The prices are fair (figure around $11 for an appetizer and $22 for an entrée), which, I hope (and the Sheerins probably pray) will prove a restaurant of this caliber can survive in a neighborhood that seems to be content living on tacos and Akira.

Service and ambiance may be the body, but the engine of Trenchermen is the kitchen. It’s the seriousness of the food that makes this a game-changing restaurant, the type, like the Publican or Girl & the Goat, that comes along every few years and nudges fine dining in a new direction. Here are pickle tots, a pile of crunchy dilly-stuffed taters strewn with thin sheets of chicken breast that have been cured and smoked in the style of bresaola. Tucked among it all is a big, fuchsia smudge of radiant sauce: dehydrated, pulverized red onions folded into yogurt and sweetened with beet juice. Here is sepia (cuttlefish) cut like fettuccine, to be twirled with a chive-avocado puree and pickled watermelon rind. Here is a sublime chilled zucchini soup in which each spoonful reveals something: sweet-spicy coconut-horseradish that is too creamy and substantial to think of as a foam, sardines whose suppleness and subtle sweetness have the power to change every wrong assumption about this misunderstood little fish. The distinctiveness of the Sheerins’ style comes from captivating flavor combinations that transcend their parts: preserved rhubarb and aged duck breast (genius), cold-smoked sturgeon and malt-powder cream (fascinating), black olives and arctic char that’s so lush it feels decadent. Every plate seems to have exactly the right number of ingredients—not so many that it feels like showing off, not so few as to lack adventure.

That is, until you get to dessert, on the subject of which I’m forced to become a little less breathless. A restaurant that either can’t afford or doesn’t feel it needs a pastry chef has two choices: Keep desserts extremely simple (usually involving a lot of ice cream) or have the chef do it (like Chris Nugent at Goosefoot). I give props to the Sheerins for going the latter route and keeping the ambitions of the desserts on the same level as the savory food. But the kitchen loses its grip on flavor when it comes to sweets, all four of which (corn doughnuts with peaches and tomatoes, almond cake with gently pickled cherries, coffee cake with smoked meringue, a grainy panna cotta) feel overcomplicated, vaguely derivative and lackluster.

My advice, for the time being at least, would be to skip them and have the Heart of Darkness II, a rye-and-chartreuse sipper, instead. This might be the best place in Chicago to dine at the bar: one, because the design is so smart (the wood bar top has two levels, more or less doubling each patron’s square footage for glassware and plates); and two, because the cocktails, from WD-50 vet Tona Palomino, are just as brilliant. Like the Sheerins’ food, Palomino’s drinks are an uncanny marriage of gumption and discretion. There are light, food-friendly drinks, such as the celery gin and tonic called the Green Hornet, and the Baby Momma, which is made with an herbal liqueur called Damiana. Each is a strikingly clean and clear expression of a subtle, unusual flavor. By my second visit, I felt this odd trust and minor obsession with Palomino (whom I’ve never met), ordering the El Viaje though I tend to find mescal’s smokiness overwhelming in cocktails, the Jewel-Up though I generally avoid unaged whiskey, the Desperate Vesper though it names as one of its three ingredients Chicago’s favorite bathtub digestif, Malört. Not once was I disappointed. In fact, the experience felt…enlightening. There are only so many types of liquor in the world, only so many ingredients a kitchen can get its hands on: What Trenchermen does is allow you to see them in a new way. 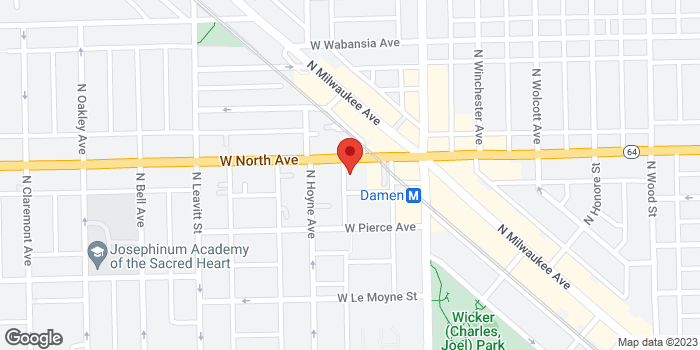