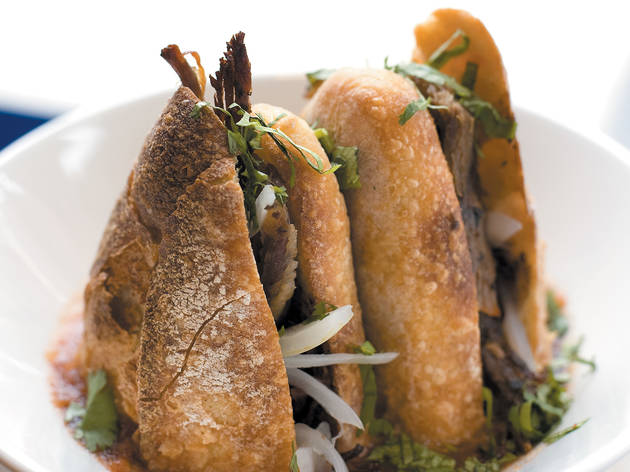 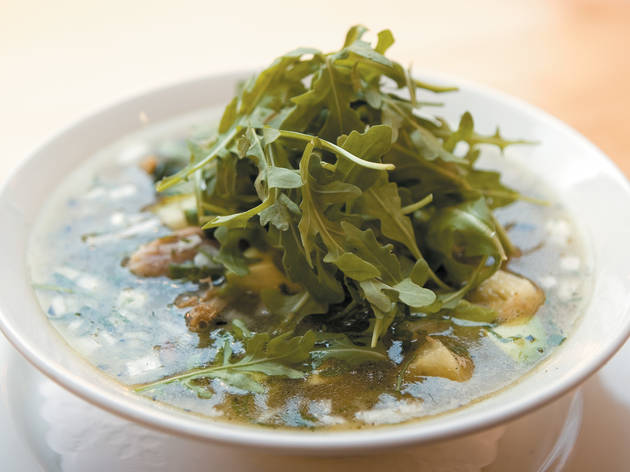 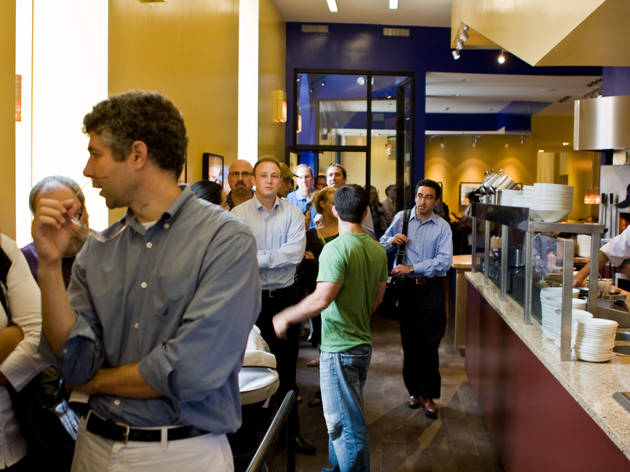 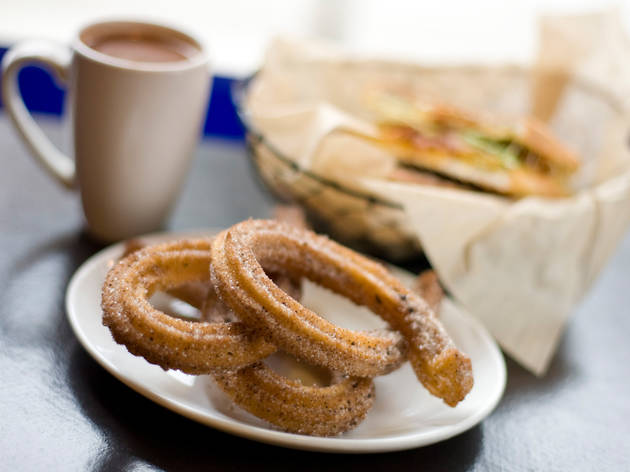 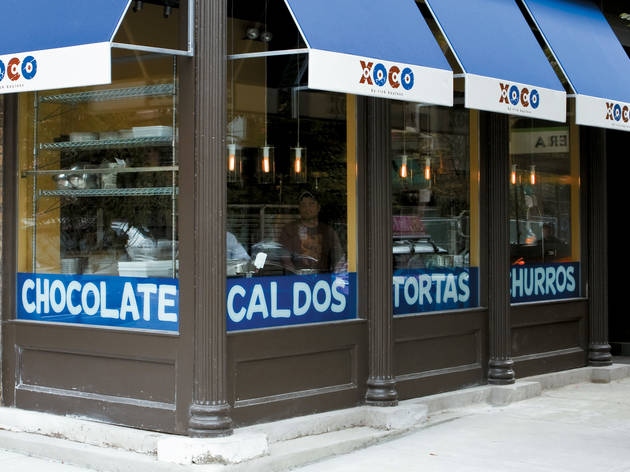 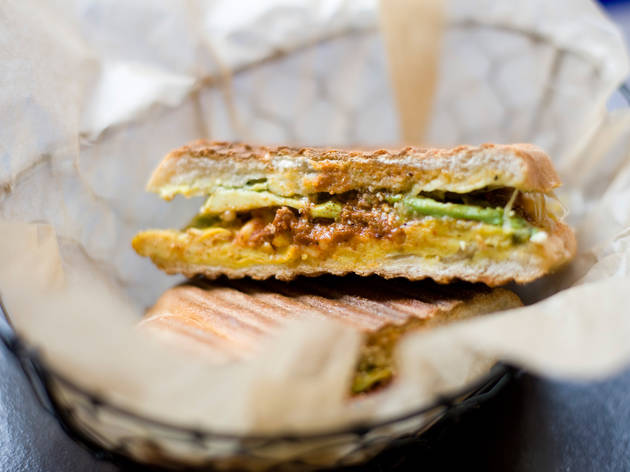 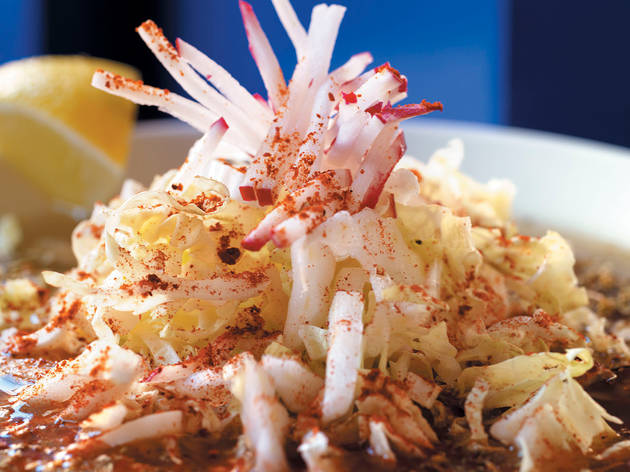 Through no fault of his own, Rick Bayless was making my life difficult. It’s not that I didn’t want to eat at XOCO. I did. Really. A lot. But to do so was going to take a healthy chunk of time. Granted, XOCO being the most tweeted opening that Chicago has ever seen—due in part to Bayless’s own assiduous tweeting—I at least knew what I was in for, wait-wise. And I’d no more criticize Bayless for being incredibly talented and personable than I would blame him for the hordes of fans lining up down the block, desirous not so much of a torta as a glimpse of the chef-star. It’s not Bayless’s fault he won Top Chef Masters.

So it must have been in a fit of frenzy and perhaps insanity that I made the last-minute decision to head over to XOCO one weekday around noon, thinking I would just grab a torta and get back to the office in an hour. No sooner did I survey the line than I promptly did a 180. (Well, not before unsuccessfully checking for a bar seat at Frontera Grill. A girl can hope.) I subsequently returned multiple times, but never on a whim. No, each later visit was planned in advance, with accompanying diners briefed on the possibility of a multi-hour meal.

And it’s that planning, deliberation and buzz, that feels, ultimately, at odds with what Bayless is trying to do here. XOCO is intentionally, expressly casual: Much of the seating is bar stools that stare smack-dab into a wall. (A generous interpretation of this setup: It’s one of the most comfortable places in the city to eat alone.) And then there’s the food, which is very, very good.

But what it’s not is subtle. The ahodaga torta slaps you across the face with acidity and salt, then coats your mouth with pork carnitas, at turns fatty, at others crisp. Eating the large, crusty wood-fired tortas is a visceral experience and by no small measure challenging—which is perhaps why the ahodaga stood out: It rests in a bowl of arbol-chile sauce that transforms it into something of a Mexican French-dip. The jamon torta (this one from the griddle, not the oven) starts off easier, with crunchy yet softer bread, but its combination of La Quercia prosciutto and sharp cheddar proves seriously aggressive. These are sandwiches that you don’t so much eat as clobber. Caldos, served after 3pm, are no less bold: red-chile soup packed thick with hunks of short-ribs; chicken pozole that’s toothsome and rich and crunchy.

The only thing that’s presented with any sort of ceremony is the hot chocolate, made on-site from the beans and poured tableside. From the thinner, spicy Aztec to the perfectly creamy Ultra to the indulgent Barcelona, it’s the best hot chocolate I’ve ever had—even if mine ended up filled with bitty churro flecks. Which is why if you’re looking for me, I’ll be there at breakfast, when the place is practically empty, and I can have my hot chocolate and a baguette slice topped simply with tomato sauce and a poached egg right there—then take my churros to go. (Breakfast, as of this writing, is the only meal with a carryout option.) It’s quick. It’s easy. Just as I—and I think Bayless, too—thought it should be.

I've been to both locations and the food was delicious. The River North spot is small and gets too busy in the evenings so come early (and hungry) on a weekend to skip the wait! Prices are great for a downtown restaurant.

I work down the block from Xoxo and am basically a regular. Adore the sandwiches and salads here. The wait can be a little long for a lunch hour (and certainly breakfast, I'd imagine), but this place is still a gem for lunch or dinner. The menu gets updated seasonally; I recently fell in love with the fall salad. Xoco also has a HUGE dessert menu, so don't miss out on a sweet treat at the end of the meal.

This place has great food if you are looking for a fast casual lunch. I had a mushroom torta which was very large and had deliciously crunchy bread. The guacamole is also creamy and excellent. The service could definitely be better! They overcrowd groups together at tables that do not seem to be communal. Very claustrophobic. Also we ordered dessert and coffee for a second go around and it took so long to arrive we checked and they had clearly forgotten our order. Another 20 minutes later, for coffee? Thumbs down. 👎🏼

All I have to say is DAMN is this place good. Rick Bayless knocks it out of the park again with this street food inspired torta shop. They have a wide variety of tortas,and some of it you may need to google the ingredients...but I promise you it's worth it. They have daily specials which obviously you can only find one day a week, but I think the seasonal specials are where it's at. Vegetarian? No problem, they have multiple options for you as well. If you're not into sandwiches, the caldos (meal in a bowl) have layers of flavor, my favorite being the Short Rib Red Chile Soup....I mean it just sounds amazing. To top it all off, they process their own chocolate.....who does that? A great place if you're on the go, just need a quick meal, or they deliver!

You can't go wrong with the tortas available at XOCO, but then again, you can't really go wrong with anything here. The milanesa is my personal favorite, coupled with an order of house made chips and guacamole. Finish off any meal here with an order of warm churros and a side of soft serve. With locations at O'Hare as well, this is the best pre-flight meal available at the airport!