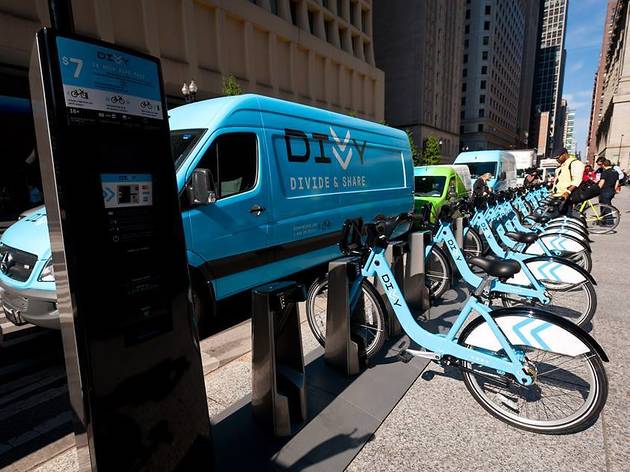 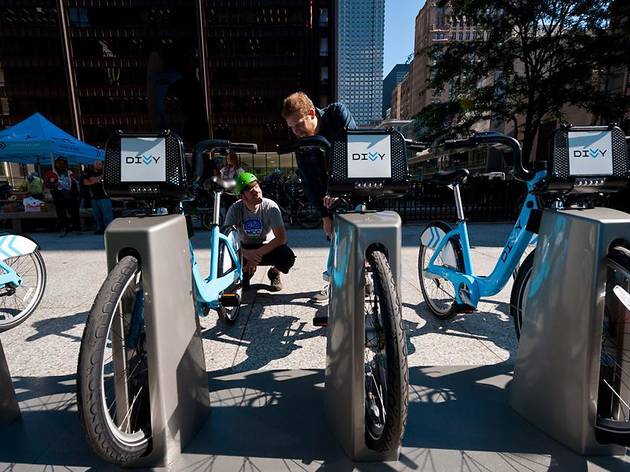 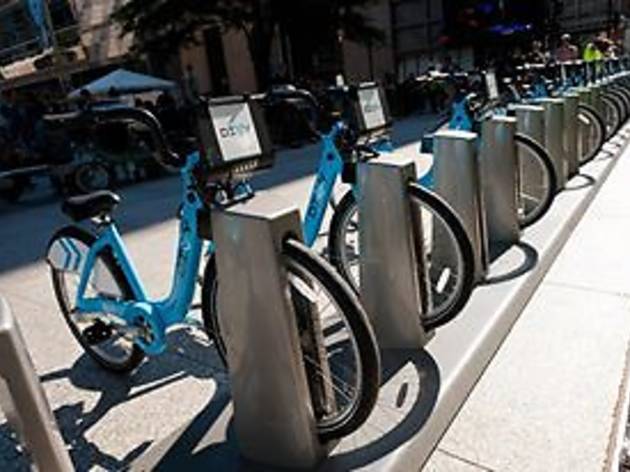 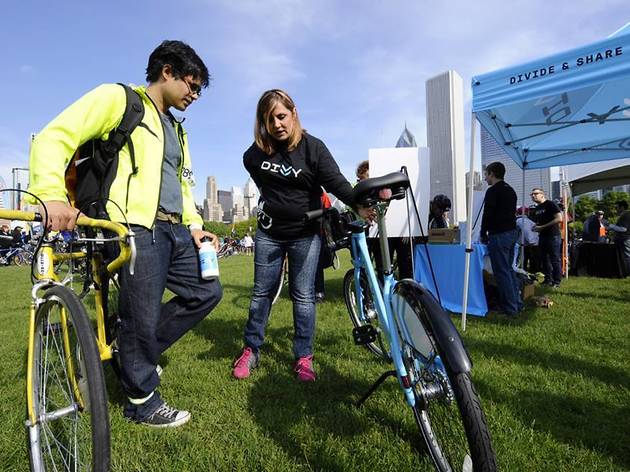 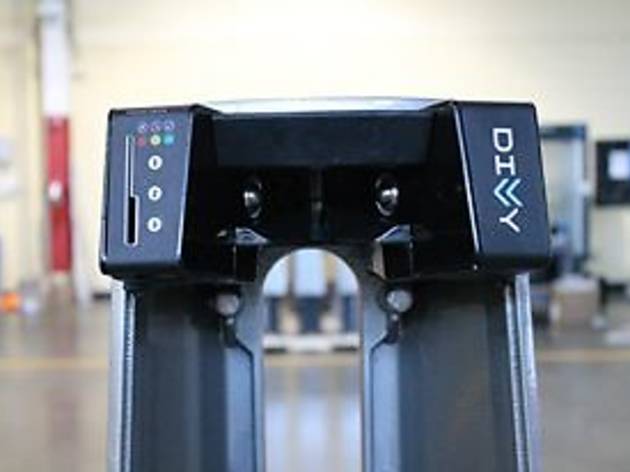 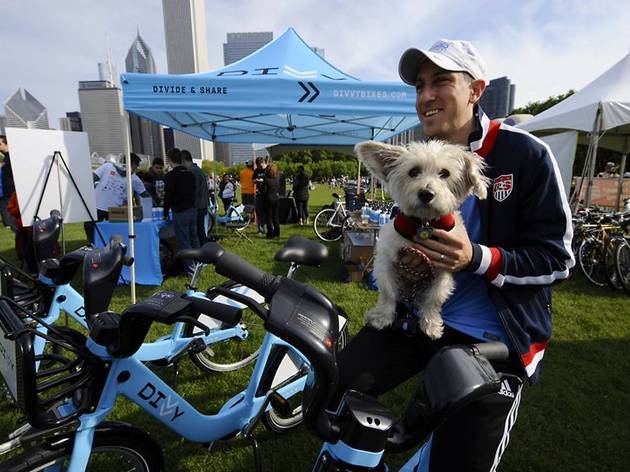 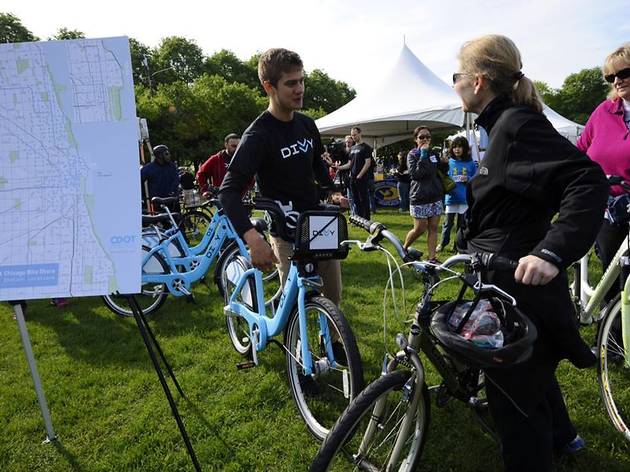 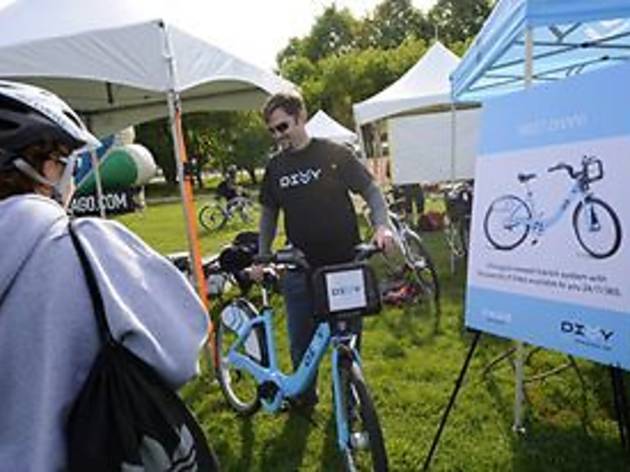 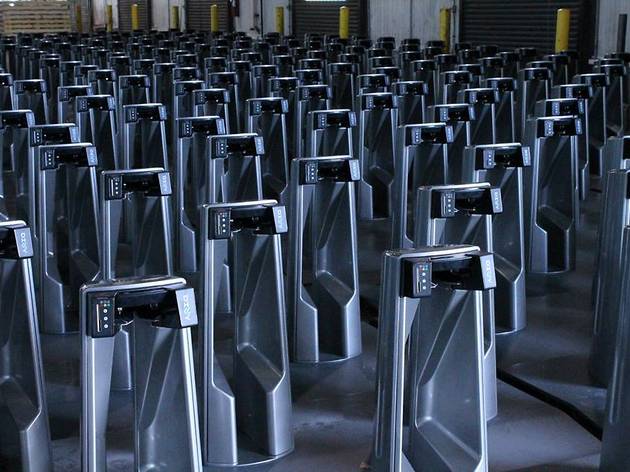 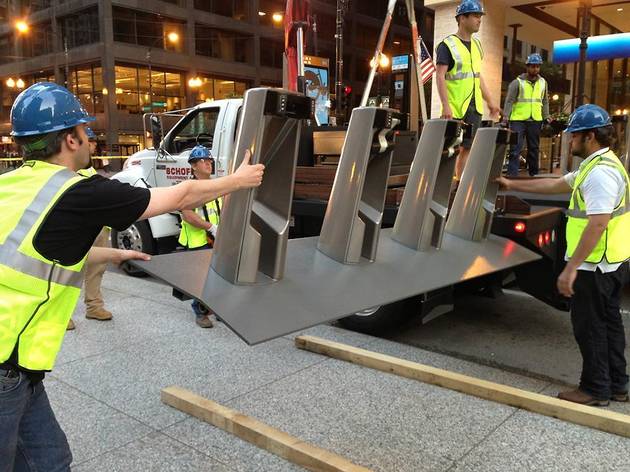 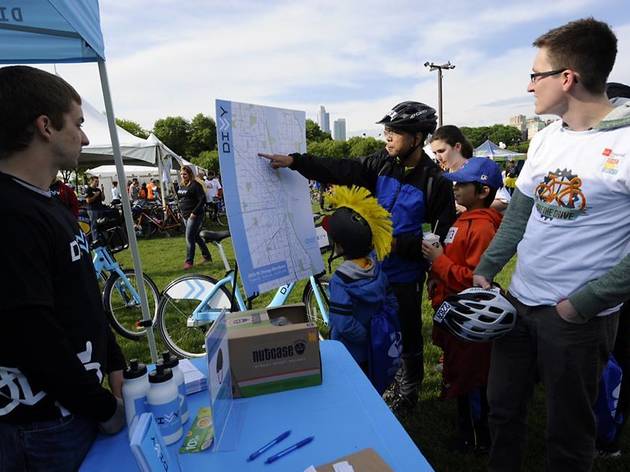 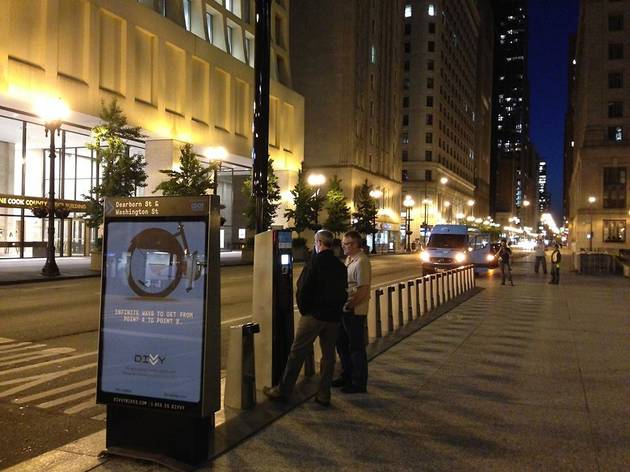 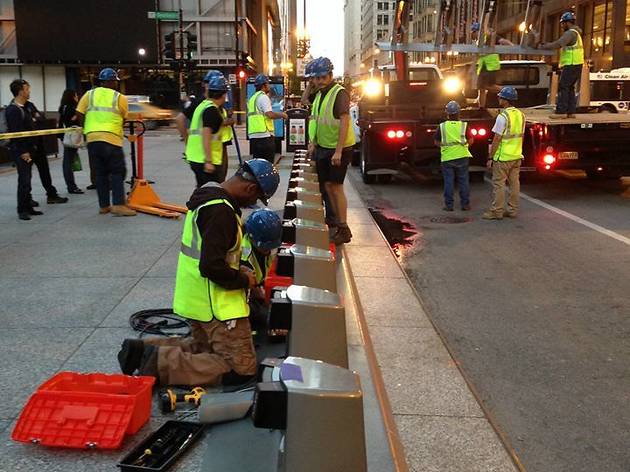 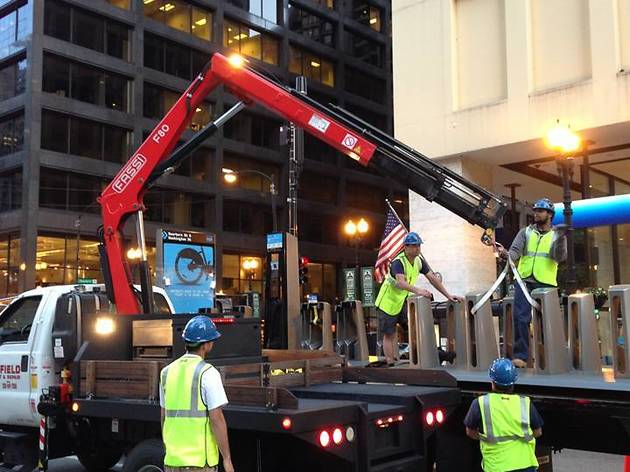 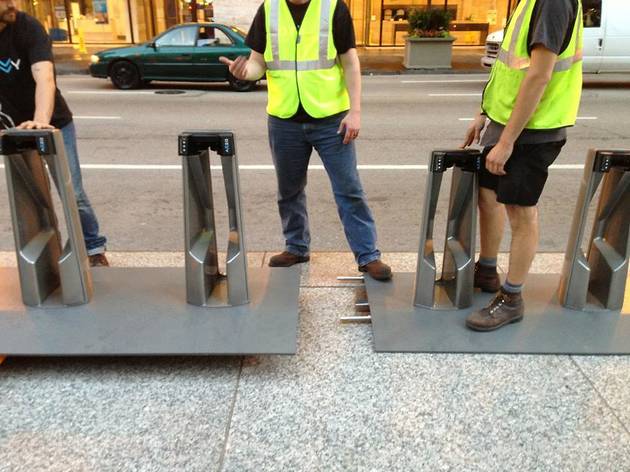 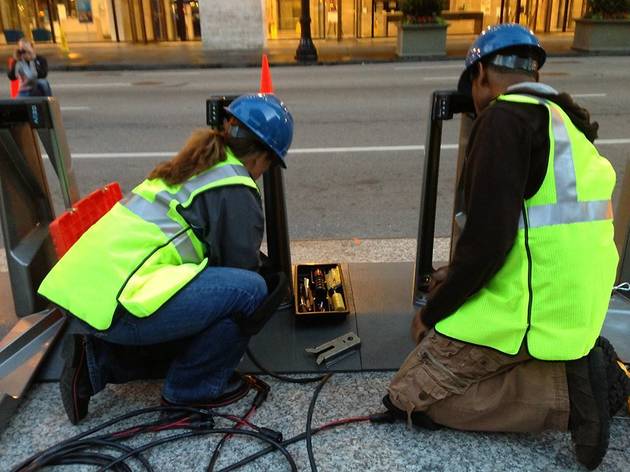 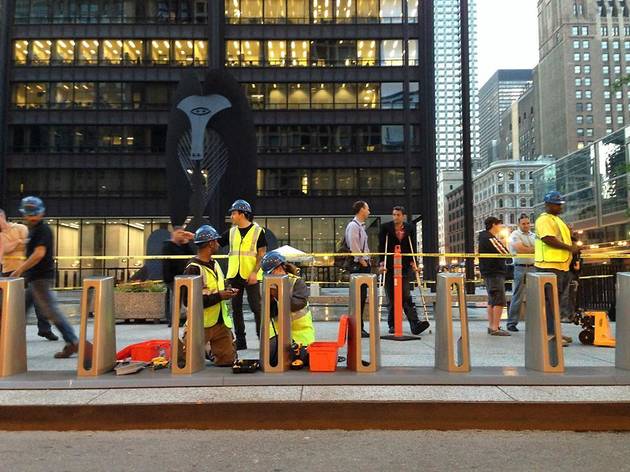 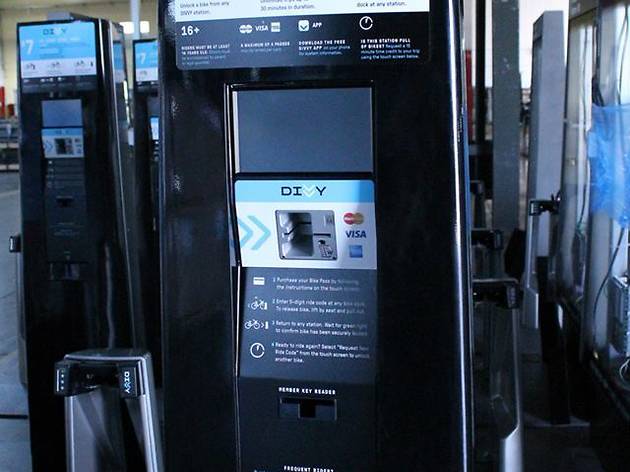 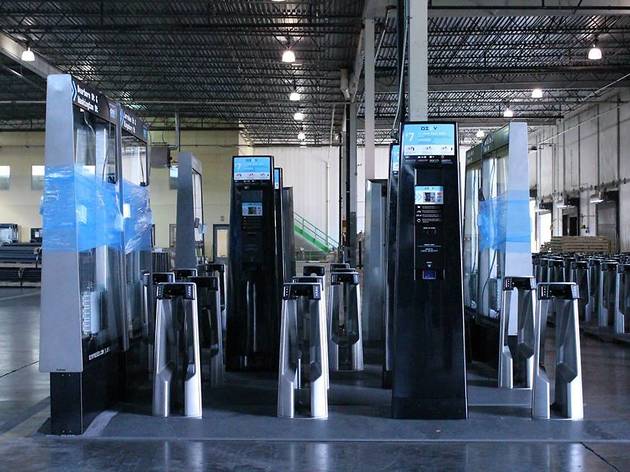 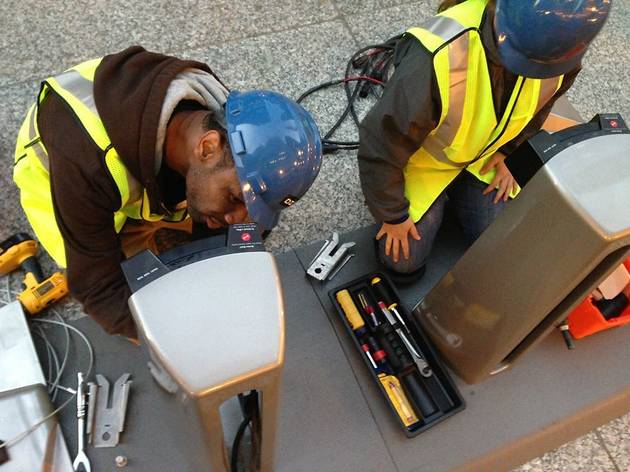 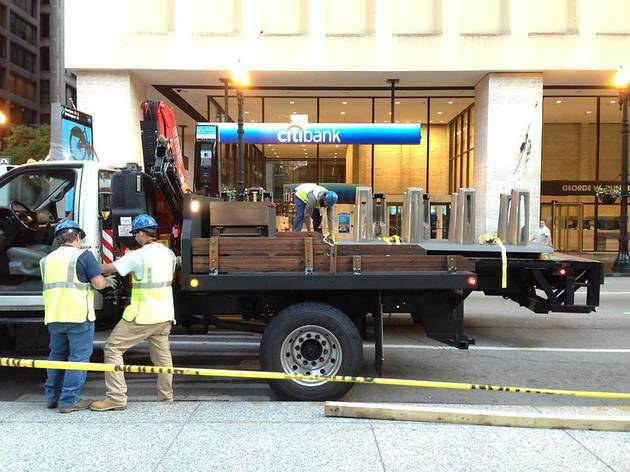 Anyone who works in the southeastern edge of the Loop, as I do, thinks of the West Loop as an inaccessible lunching Shangri-La, a teasing hub of desirable restaurants sitting just far away enough as to be impractical to the typical nine-to-fiver on his hour-long break.

A man can eat only so many burrito bowls.

It was with the promise of an expanded lunch radius that I was eyeing Divvy, Chicago’s nascent federally-funded bike-share program, which facilitates rides less than 30 minutes from station to station—perfect for an outing to a restaurant and back to work. (Owned by the city and operated by Alta Bicycle Share, Inc, Divvy takes its name from the idea of dividing and sharing the cycles.) Empty of stomach yesterday, just the fourth day of the program, TOC managing editor Brent DiCrescenzo and I set out to rent a pair of the bicycles. Astride the powder-blue bikes, a new menu of possibilities revealed itself: Au Cheval, Little Goat and its sun-drenched rooftop, Bill Kim’s bellyQ.

So how exactly does Divvy work?

Taking out a bike is as simple as buying a CTA farecard at one of the agency’s debit/credit vending machines. Sign up for a $75 annual membership online, or purchase a 24-hour pass for $7 with a credit or debit card at the monolith touchscreen kiosk located at each station. But your first stop should be the online station map, a tool allowing users to see Divvy spots close to their starting point and near their destination, which stations are in and out of service and a real-time count of the number of bikes parked and how many open docks are available. The app CycleFinder pulls in this information, as well.

This info is especially useful on a return trip; if you encounter a full station, as some riders did on day one, you’re given 15 extra minutes to locate the next closest station that has empty docks. (The city launched with 700 bikes at 61 stations, but will eventually have 4,000 cycles at 400 stations.) I was able to find a station just a block south from the TOC office at State and Van Buren Streets flush with about a dozen bikes.

Members are sent a key three to five days after registering. Passholders get a receipt from the solar-powered kiosk with a printed five digit ride code. (A security deposit hold of $1 per bike is placed on your card.) I typed the combination of 1s, 2s and 3s into a dock’s keypad, and a couple seconds later, I was able to pull the bicycle from the rack. (After five minutes, if you don’t successfully use the code, you have to swipe your card again to request a new set of numbers.)

“Don’t forget your helmet,” reads the kiosk. But who among us—especially the non-bike-owning public—carries a cycling helmet? “Divvy strongly encourages you to wear a helmet when you ride,” the program’s website says. But tourists, a hunk of Divvy’s audience, will almost certainly not have protective headgear.

It may take a cracked skull or two to initiate talk of a concurrent helmet-share program. The bikes, however, are made to emphasize safety and curb any daredevil tendencies. The hefty cycle—its 45 pounds feel more like 100-plus—does not inspire risk taking. Wide handlebars—and an even wider turning radius—prohibit threading those narrow passageways between automobile traffic lanes and parked cars. The bike’s deep “step-thru frame,” front and rear flashing LEDs, super-fat tires, front basket and the high-pitched ding of the onboard bell give you the feeling, as my colleague Brent described it, of riding a child's Huffy from Kmart, handlebar pom-poms flapping in the breeze.

You may not feel “cool” on the Divvy bikes, but you will have a palpable sense of safety (well, as safe as you can feel while riding downtown helmet-less, anyway). After all, the sturdy bikes have only three gears, none of which take you very far above cruising speed. The negligible first gear made me think the chain fell off its sprocket. Third is less conservative, yet occasionally demands frenzied pedalling to keep up with the flow traffic.

Speed (mostly the lack of it) is an issue with Divvy. Riders are under the gun. For passholders, station-to-station treks that clock in at more than 30 minutes incur overtime fees. (An additional $2 for the second half hour, $4 for the third 30 minutes, and $8 for every half hour afterward.) Departing from the dock at State and Van Buren, it took about 20 minutes to arrive at the dock at Morgan and Lake Streets. If we had hit more red lights or were less physically fit (Brent is training for a sprint triathlon and I'm a regular cyclist), the ride could’ve easily crept over a half hour. Directionally challenged tourists taking Divvy from hotels in the South Loop to Navy Pier or from River North to the Museum Campus are likely to be subject to overtime fees.

At the dock, the front wheel fits back into the rack. The blink of a green light says it's locked. (It would be wise to make sure it’s actually secured, since users are responsible for the $1,200 bike until it’s properly docked.) After lunch at Publican Quality Meats, I swiped my card at the kiosk, which spat out another receipt with a new ride code. Back on Big Blue, the city’s lunch landscape suddenly seemed as open as the Dearborn bike lane. Burrito bowls be damned.