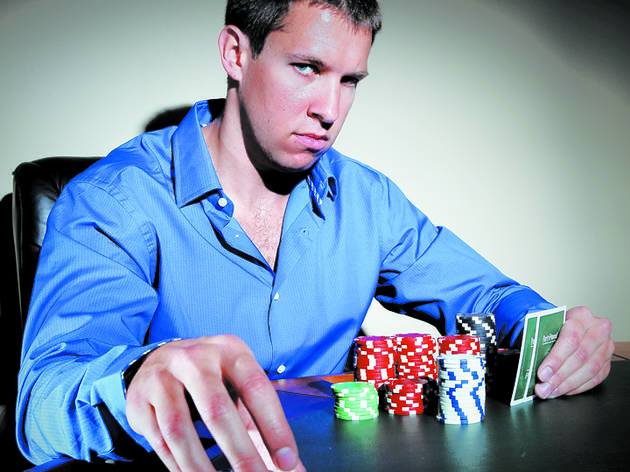 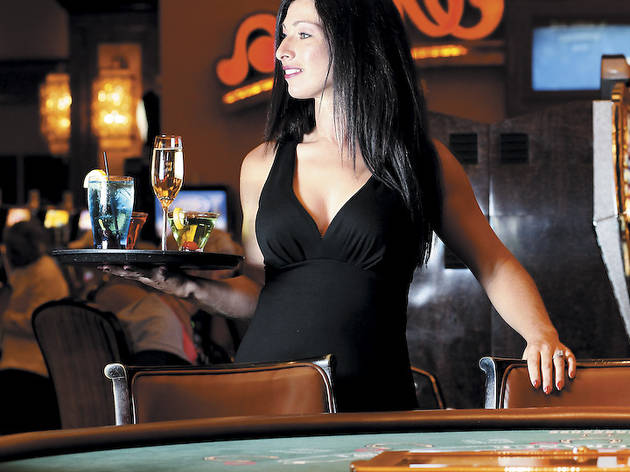 2/4
Photograph: Allison WilliamsCocktail waitress Shannon Torrence at the Horseshoe Casino in Hammond, IN. 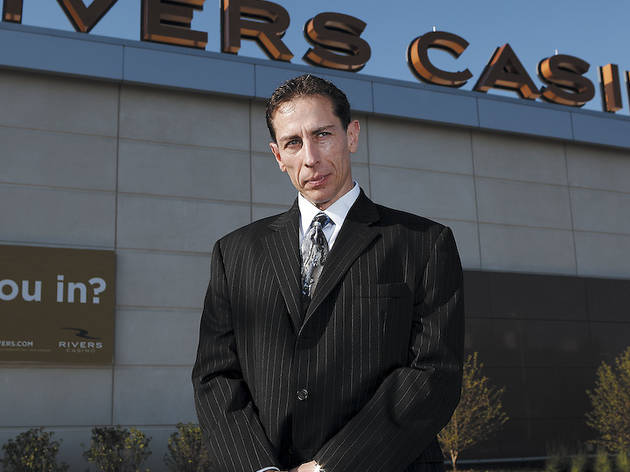 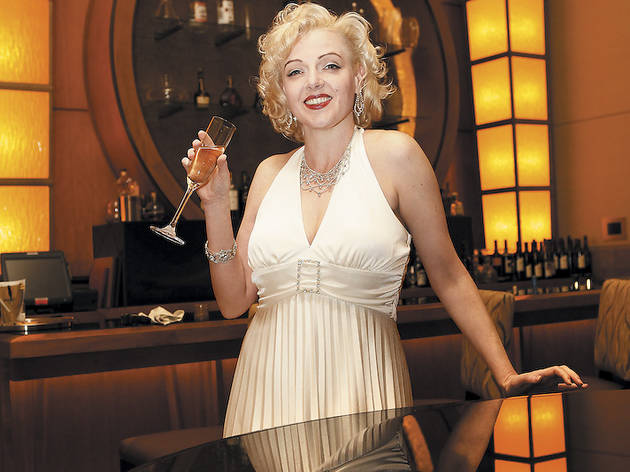 PRO POKER PLAYER
Tom Koral, 28, Skokie
“The great thing about being a poker player is that you’re your own boss. There are certain days where the poker action picks up, like Mondays, Wednesdays, Fridays usually, so I’ll try to go [to casinos] on those days…. [Tournaments] are held all over the place. There’s one held in the Bahamas every year, there’s another really big one in Melbourne, Australia…. Because the tournaments typically take four days or longer, you really want to try and get yourself in a healthy state of mind before you play. Try and exercise the day before or get outside and do something, or eat healthy so you don’t feel like you’re weighed down at the table…. The [tournaments] almost always start at noon—noon or later—so it works out well. It’s about 10–12 hours of playing and then the rest of the day [there are] sporadic breaks, and a dinner break usually, too. The longest game I’ve ever played straight is about 27 hours. But I’ve heard stories about poker players playing even 40, 48 hours straight…. Since I mainly travel to the bigger buy-in [tournaments], [I play] 25–30 a year…. I make six figures a year, pretty consistently. There’s a famous saying, ‘Poker is a hard way to make an easy living.’ There’s a lot of stress to deal with, but you make an easy living if you can do it correctly.”—Tomi Obaro

COCKTAIL WAITRESS
Shannon Torrence, 31, at Horseshoe Casino in Hammond, Indiana
“Just the atmosphere made me apply here. The people at casinos just always seemed so friendly. Our shifts are normally an eight- or nine-hour shift with two 30-minute breaks. There are over 100 [cocktail waitresses] here. I would say around 18 cocktail waitresses work on a given shift…. It’s really knowing where the slot machines are that is the hardest part. We have to remember exactly what machine we’re walking to. I’d say I serve over 100 drinks [an hour]…. I love my slot regulars. If I’m working [the VIP room] for an entire week and come back on slots they’re like, ‘Where did you go?’ Some regulars are here all night, sometimes even when we get here in the morning…. Last call is at 2:30am and first call is at 7am. I’ve worked the 11pm–7am shift and there are customers waiting to drink who are bugging me, ‘Is it seven o’clock yet, is it seven o’clock yet?’ I’m like, ‘It’s seven o’clock, why do you drink at seven?’ There are a few people, I can’t say there’s a lot, but there’s a handful that sit there and drink at 7am…. I get hit on all the time. Once or twice people were too forward, but I immediately called security and they took care of it…. I don’t gamble, I don’t know how to gamble and my parents don’t gamble. We’re not allowed to stay here and gamble and that’s probably a good thing!”—Jamie Friedlander

PIT BOSS
Jose Lebron, 52, at Rivers Casino in Des Plaines
“We open at 9am, but nine is one of the slowest times, so I try to get here by 11am…. Typically, we hope our managers take care of customer complaints, but I do handle them as well. [Customers] may complain that they didn’t get enough play for their money. Waiting in line can be a common one as well. In some instances, only a simple apology is needed. In other situations, we look to make amends for an error, [sometimes] with a complimentary meal…. [Cheating] doesn’t happen often, but our teams are well-trained to spot the signs and behaviors when such activity is happening. In roulette, someone may try to distract the dealer by the roulette [wheel], so that their partner can make a late bet down at the other end of the table…. Blackjack, craps, roulette and mini baccarat are among the most popular [table games]. If no one’s really playing a game, we may remove it. But you can’t just pick up a table and move it. We work with the appropriate regulatory parties to make changes.… Ninety percent of [my job] is being on the floor and seeing how things are working throughout the departments. I’m also always monitoring equipment. We’re nonsmoking, but people do spill drinks. Our tables are designed to weather [spills], so cleanup is actually fairly simple. I also take a playing-card inventory. The last thing I want to do is run out of cards.… I typically leave work around 10pm.”—Allyson Byers

CELEBRITY-IMPERSONATING DEALER
Cody Gregory, 38, at Hollywood Casino in Joliet
“I impersonate Marilyn [Monroe] on Thursdays and Saturdays, and I do Madonna on Fridays and Sundays. Most of the celebrity impersonators get the job as an impersonator first and then get trained as a dealer, but I actually worked in a casino in Indiana for 12 years so I already had the gaming experience. I’d been called Marilyn daily for 12 years so I just tried being her. But after a singing audition, [the casino] decided to make me Madonna. I just recently started doing Marilyn as well. Madonna was more of a challenge because I sound like her, but she’s known for dancing and I have two left feet…. One of my first days as Marilyn, we have a player—he’s one of our favorite players, he’s in every weekend—it was his birthday and so I got up on stage [near the table games] and sang “Happy Birthday Mister High Roller” to him a cappella and he just loved it…. Normally before a shift starts we get here an hour-and-a-half early to do costuming and makeup. It’s staggered so every ten minutes someone is up on stage performing…. We’re a very tight group. We have a Kid Rock, Ozzy Osbourne, Dolly Parton, Elvis, Britney Spears and a Lady Gaga…. Getting on stage and just singing is the best part.”—Jamie Friedlander

EX-BOOKIE
Anonymous, 37
“Sixteen years ago, during high school in a small south suburb of Chicago, I started hanging out at a local baseball card and comic shop. After befriending the owner, I came to occasionally help him with customers when he was on the phone. It quickly became apparent why he needed my help. On the other end of the wave of phone calls he received after 4:30 each day were ‘customers’ wanting to place bets on sports, which were all dutifully recorded in a spiral notebook. After expressing my curiosity, and given I was a trusted member of the coterie, I began to work in the ‘organization.’ Guys would call in giving me their account number or code name (one guy’s name was ‘Hawk’), asking me what the spreads or odds were on certain games and making their wagers. Once every week or two, each of these voices on the phone would show up to discreetly pay their deficit (typical) or collect their winnings (infrequent). Soon, I was off to college, where my own personally bankrolled bookie operation slowly grew from a few curious clients to about 30 students, including a third of the tennis team. From sophomore year through the end of senior year, I took bets on pro and college football, pro baseball, pro and college basketball, and pro hockey. Bets were typically smaller: $10–$15 per game, as opposed to $50–$500 at the baseball card shop. I’d make $200 a week on average. The key to getting paid on time? Telling your clients that there’s someone above you in the chain, someone quickly prone to anger perhaps, in need of getting his money. I only ever got stiffed once.”—Marissa Conrad