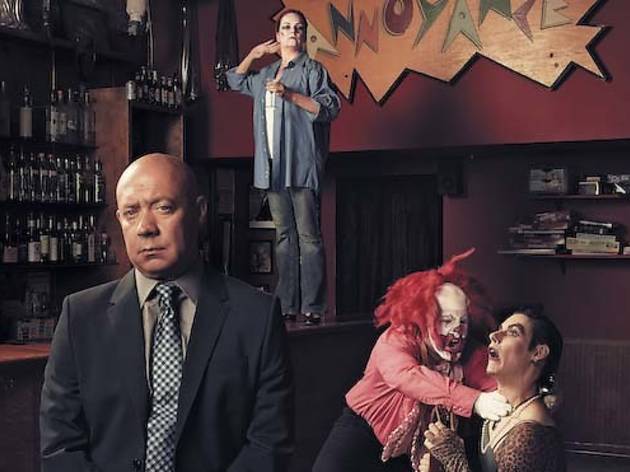 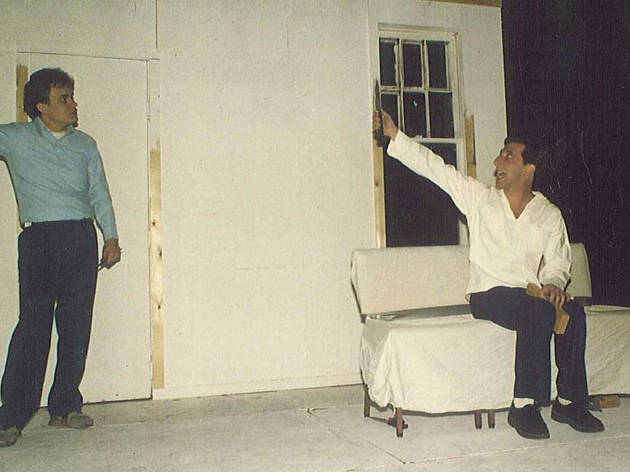 2/17
Eric Waddell as the father, from left, and Dave Razowsky as Carl in Splatter Theater, 1987 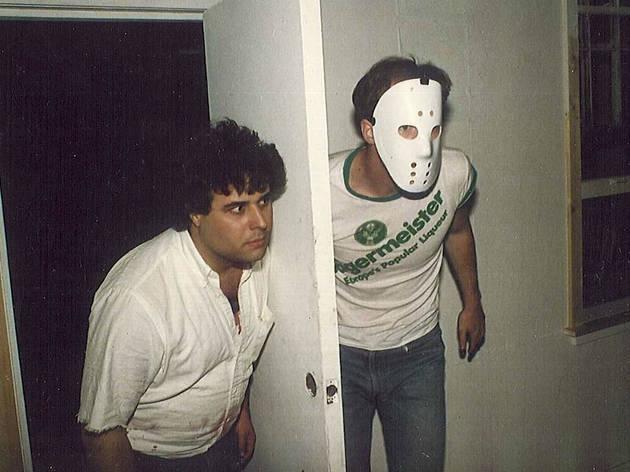 3/17
Richard Laible as the Class Dick, Joe Bill as the Killer in Splatter Theater, 1987 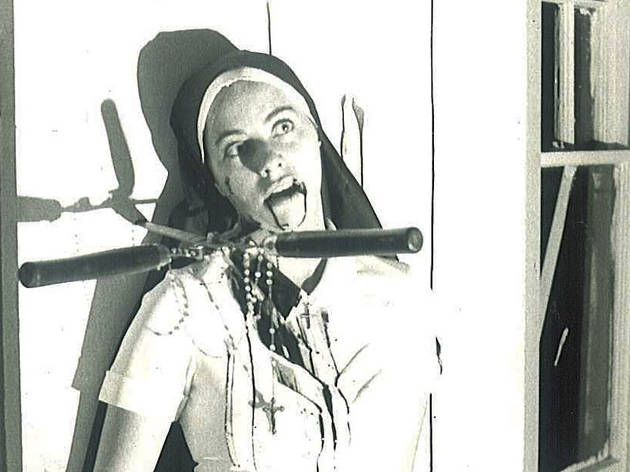 4/17
Marguerite Hammersley as the nun in Splatter Theater, 1987 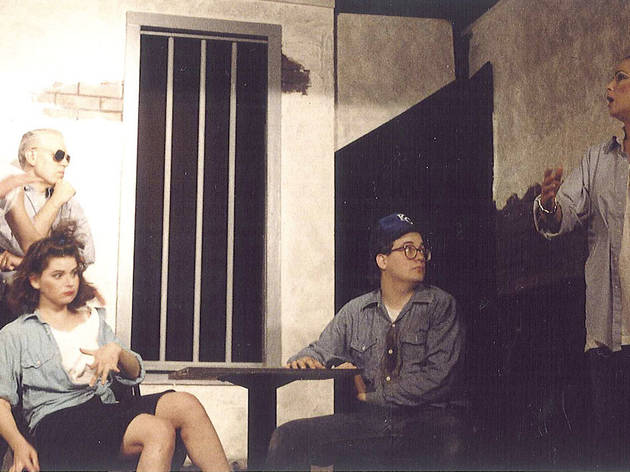 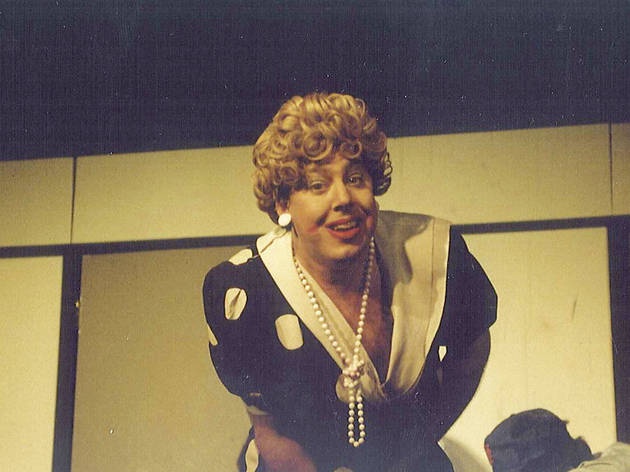 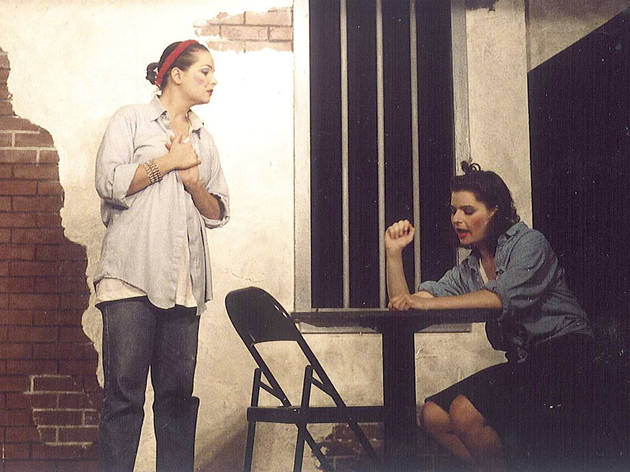 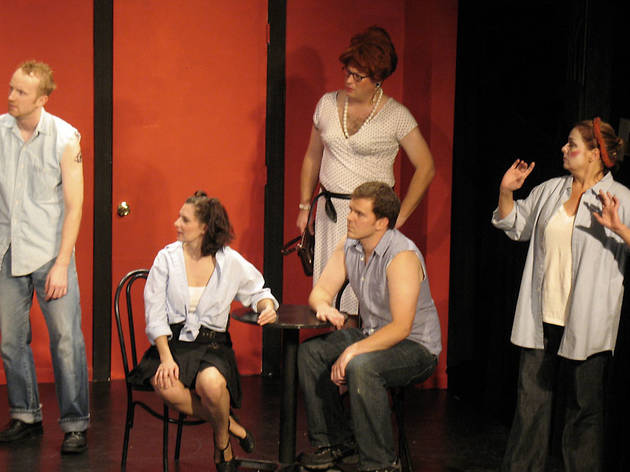 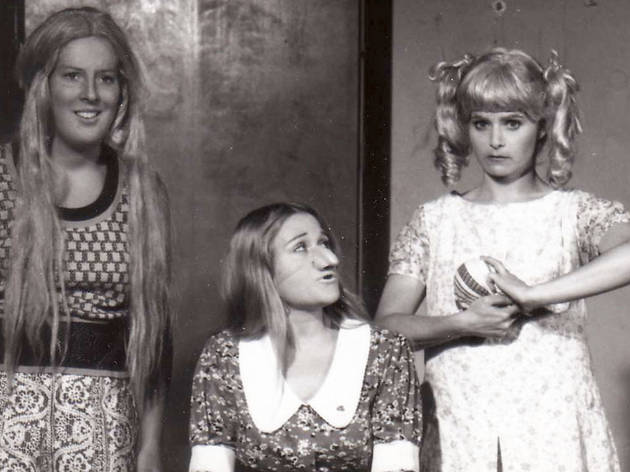 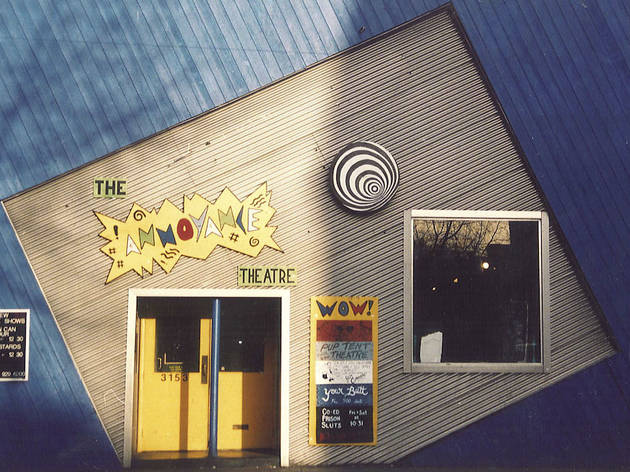 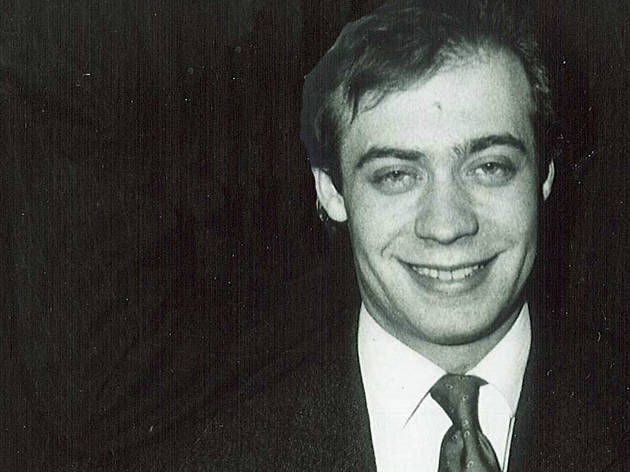 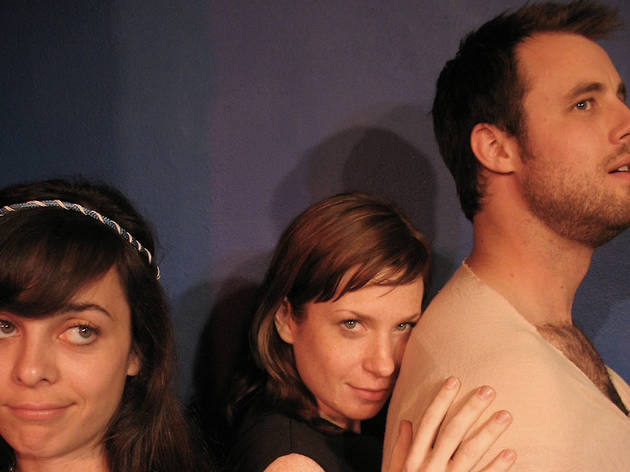 12/17
Irene Marquette (from left), Christy Bonstell and Chris Witaske in Sodomites!!! A Musical of Biblical Proportions 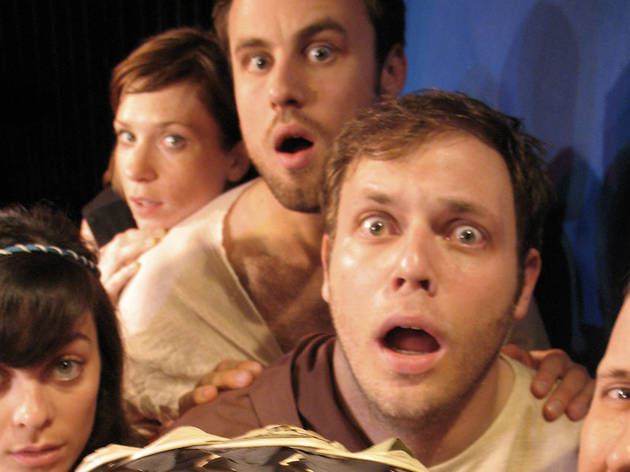 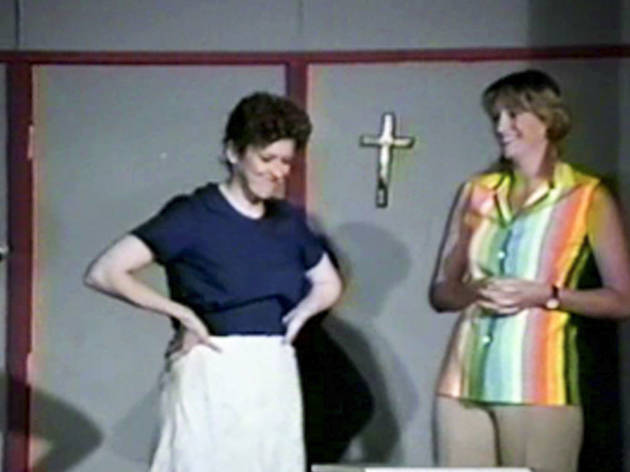 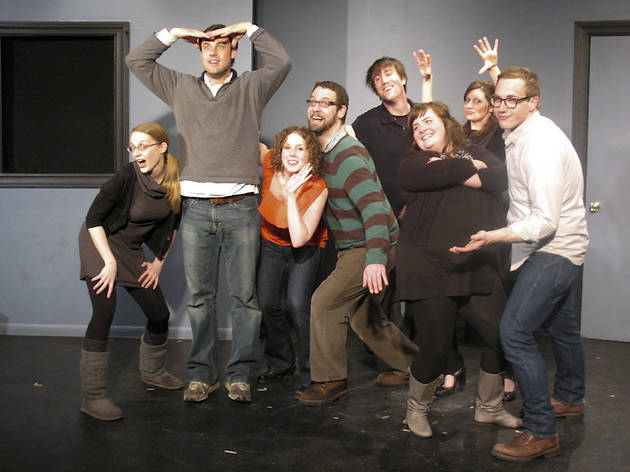 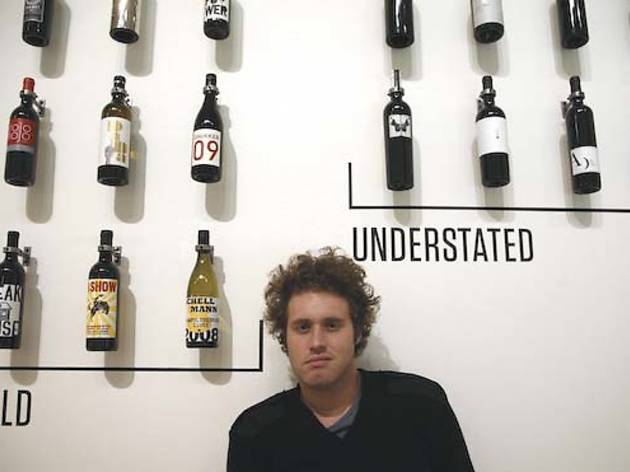 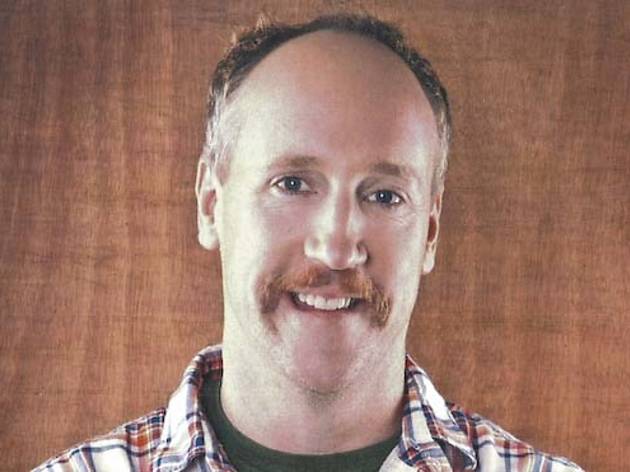 In the beginning (1987)
Mick Napier (founder, artistic director) I hail from Indiana University and came to Chicago to study improvisation and do comedy. I was way into John Waters and horror films. Our first narrative show was Splatter Theater, and it was a parody of slasher films.… We would have blood dripping off the stage, through the floor and sometimes onto the patrons in the bar underneath, so that became a problem for us for a while.
Matt Walsh (Upright Citizens Brigade, Veep) One of the first shows I did [at the Annoyance] was called Der Ragamuffin. It was like a postapocalyptic show with a live chicken, and I think the job of the main character was to dance till soldiers could urinate on his wall or something like that. It was crazy.

Co-Ed Prison Sluts (1989)
Napier I started that first rehearsal only knowing the name of that show and that I wanted a clown to fight a drag queen and that’s it. Everything else was improvised.
Jennifer Estlin (president, executive producer) I had done Splatter Theater [II] and saw the first preview of Co-Ed Prison Sluts and asked to have a meeting with Mick. I was upset about it. You have these amazing people doing this wonderful singing and there are great songs, but the show is kind of horrific.
Napier The first preview of Co-Ed Prison Sluts was on a Wednesday evening, and we had about five or six laughs. It looked very ugly and hateful. I actually just walked away and literally cried. The next day, Mark Sutton and I worked on it all day long.
Mark Sutton (co-founder) We had worked so hard on that show and that was kind of like, if this show doesn’t make it, we’re done. We had lost a lot of money on the Splatter [sequel], and we needed a show that was gonna be successful. I don’t think we’ve ever been as low after a show in the entire 25 years as we were after that night.
Napier At any rate, Friday night it opened and it had 100-and-something laughs and a standing ovation.

The first Annoyance Theatre (1989)
Napier We got a space on Broadway and Briar and it was about a 100-seat theater, a big lobby and a house on top. I lived there. It was a lot of fun and a lot of money, and I got into a lot of financial problems with it eventually. But we were there for six years or so.
Walsh It was pretty skeevy. There were rats in the basement and upstairs there were always beer bottles and bags of chips floating around and everybody was smoking.
Sutton We did a midnight show of [The] Miss Vagina Pageant because Saturday Night Live was scouting some of our talent. I’m standing in the lobby for a midnight show on a Wednesday and Joan Cusack, John Cusack and Jon Lovitz were in the lobby, and then a limo pulls up and out comes Quincy Jones and Lorne Michaels into our craphole little theater. I was like, Hey, we might be onto something here. That’s how Melanie Hutsell and Beth Cahill got exposed to Saturday Night Live and as a result of that got hired.
Susan Messing (Messing with a Friend) What I did in that show really should be illegal. I disguised myself as black. We did that show in front of Quincy Jones. So when I was doing an interpretation of the dramatic escape of Harriet Tubman, you better believe everyone was looking at Quincy first to see if it was okay to laugh.

The Real Live Brady Bunch (1992)
Faith Soloway (Co-Ed Prison Sluts musical director, The Real Live Brady Bunch co-creator) My sister [Six Feet Under former executive producer Jill Soloway] and [Mr. Show and Weeds actor] Becky Thyre were watching a Brady Brunch rerun. Becky started imitating Jan, and she was playing the scene so real. I said, “This should be onstage.”
Napier I remember saying, “I think it’s really stupid and, sure, we can do it for a couple of weeks,” and then the first night we did it was bizarrely just completely sold out, lines around the block.
Messing People would take off work and stand in line at noon.
Soloway Paramount had gotten word. They wanted to give us a cease-and-desist order, and [The Brady Bunch creator] Sherwood [Schwartz] was like, Let me see what they’re doing. He loved it, he got onstage, people went crazy like it was Jesus Christ. Eve Plumb [the original Jan Brady] came down three weeks later.
Napier That went on to New York, and that’s what took Andy Richter and Jane Lynch to New York and Los Angeles. At that time, it created an artistic and logistical rift in the theater in that half of the talent pool at the Annoyance just completely went away.
Andy Richter There was, I think, two or three Mike Bradys prior to me. [Mark Sutton] was the announcer in the game show [which opened The Real Live Brady Bunch] and also playing Mike Brady and, because of his obligations to the theater, he didn’t want to go to New York, whereas I had no obligations to anything or anyone, and I did want to go to New York. I actually went to Jill Soloway and I said, “Hey, I can do an announcer thing for the game show. You can buy me a $20 wig and I can be Mike Brady. I mean, anybody can say, ‘Honey, I’m home.’ ”

What Every Girl Should Know…An Ode to Judy Blume (1998)
Messing You know when you come up with an idea high in your tub that you just got to see through to fruition? I had taken Judy Blume’s stories and done some sort of reading onstage that didn’t work. I got together with Mary Scruggs, and she and I adapted it for stage. Then I cast the bitch and went to the Annoyance [now in a new theater on Clark Street] and said, “Hey, I’ve got an idea and we could get in trouble for it.”… What Every Girl Should Know…An Ode to Judy Blume became a shit fire and did really well.… Judy’s lawyer sent us a cease-and-desist. We invited them to come see the show. After the show I looked at [Blume] and she smiled and I burst into tears. The place went wild, and she ended up buying the cast drinks that night and then took Mary and I for breakfast the next morning. She let us keep running the show. She said we had to give a donation to the National Coalition Against Censorship, and every year since then I’ve been giving a hefty donation.

The Uptown era (2006–present)
Vanessa Bayer (featured player, SNL) I did a show called The Li’l Talent Show [in the theater’s current home at 4830 North Broadway], which is probably still one of my favorite shows that I’ve ever done.… There’s a child character, like a kid actress character, that I’ve done on SNL that we would do in that show a lot.
Aidy Bryant (performer, Second City e.t.c.) One of my favorite scenes that I’ve ever done in my entire life is truly disgusting. [In Swear Jar] Vanessa Bayer has me sleep over at her family’s, and I’ve gotten my period all over their entire house. The essence of the scene is that the family never bats an eye. They’re like, Oh, that’s great, that’s the fun of a sleepover!
Chris Witaske (performer, Second City e.t.c.) She has had her period and she got blood all over the dog and it just gets worse and worse until finally I, as the dad, just can’t believe she’s made this horrible mess and we all freak out.
Bayer It was so hard to keep a straight face. It’s really fun to be in a scene where you don’t know if you’re going to be able to keep it together.
James Asmus (Marvel Comics) I knew I wanted to do a story about how fucking crazy the Bible is. Annoyance is the one theater that would let me confront a religious idea in a comedic way [to put on Sodomites!!! A Musical of Biblical Proportions]. There was a group of six people who came who thought it was an actual, like, Bible pageant. I think they stayed through the euphemism-laden opening number, but then once Chris Witaske came in screaming obscenities as Lot, they took off. But they were very nice! They didn’t even ask for their money back. At the door, they were like, “We…we made a mistake.”

Enduring influence
Napier Before the Annoyance, there really wasn’t a multiple-show business model for theater in the city. You would never go to a theater and it would have 15 different shows in a week. We did that, and I’m really, really proud of that. It’s influenced not only iO, but Second City and UCB and other theaters in the United States.
Witaske Mick gets so much credit at the Annoyance, but Jennifer Estlin is really the brains behind the scenes.… She literally keeps the lights on.
T.J. Miller (Our Idiot Brother, Rock of Ages) [Napier] wasn’t really the best [improv director in Chicago], he was just different than any other teacher or director. Plus, he liked to drink and was into leather, the ideal mentor for any twentysomething white kid with a college education who couldn’t make much of it outside of getting a day job while flailing at improv every night.
Marisol Torres (director, Law & Order) The biggest thing I took from that time of my life was Mick’s mantra: “Just say fuck it.” I was just a kid, I was in my early twenties, but that has stayed with me for the past 25 years, and it’s how I approach everything in life. What’s the worst thing that could happen?