Today, we tap (and tap) RFID chips in Ventra cards to hop on the train or bus. But it wasn't that long ago that commuters used tokens to pay for the CTA. Long before that, electric trolleys rumbled down the street. Point is, Chicago is constantly changing. Red-light districts have been replaced with gourmet doughnut shops and lofted tech-company offices. Motor inns have been replaced with towering boutique hotels downtown. We carry phones in our pockets, so what's the need for a public payphone? 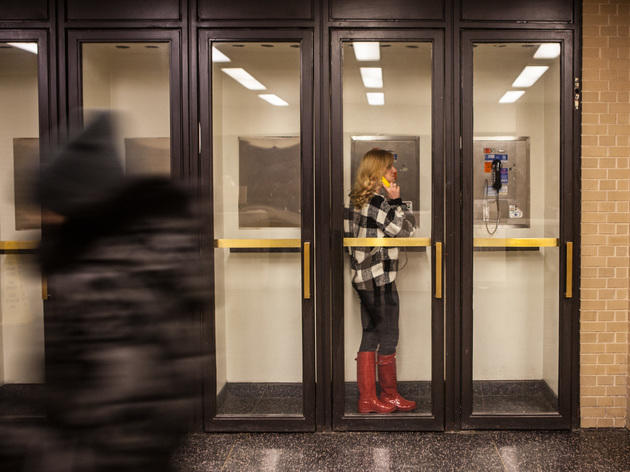 Where's a Superman to change? The era of sidewalk phone booths is long behind us, save for some tourist totems in London and at Dr. Who conventions. Some payphones do still exist in public hubs like airports, though, so that Maroon 5 hit from 2012 isn't complete bullshit. The bowels of the Daley Center even still houses a couple change-operated, honest-to-god-cord-attached telephones in wooden booths. No, they do not accept Bitcoin. 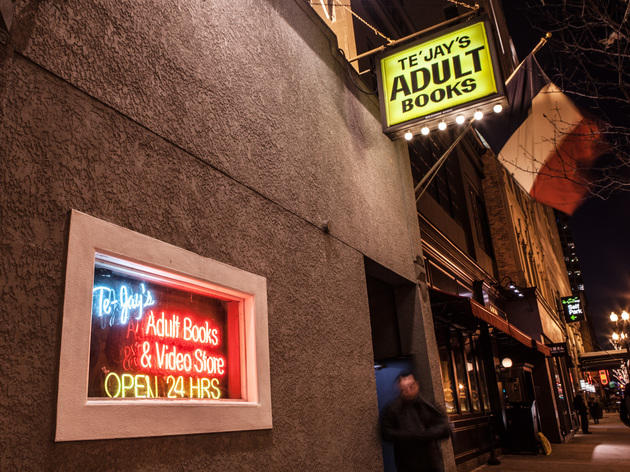 The Yelp reviews are not kind. (Yes, of course there are Yelp reviews of an aging porno store.) But if you work in River North or stumble out of Paris Club late at night and need a private peep show, where else are you gonna go? Chicago's first red-light district, dating back to the 19th century, was on Dearborn in the South Loop, but in the first half of the 20th century the kink moved over the river. With ramen joints, gourmet doughnuts and craft cocktails in the neighborhood, little remains but this bunker of spank mags and toys.
Advertising 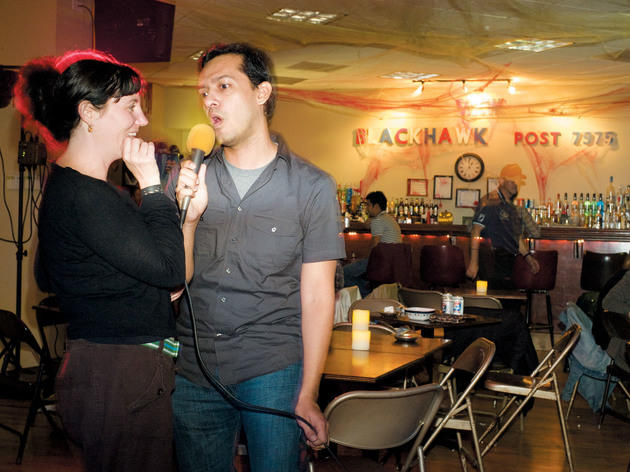 The Smoke Free Illinois Act went into affect January 1, 2008. Our laundry has smelled better ever since. But those with cig addictions can still get their cancer stick kicks indoors…while drinking! …and singing karaoke! The VFW hall recently moved from its old Milwaukee Ave haunt (where the photo was taken) to Clybourn, but it still has its charm. 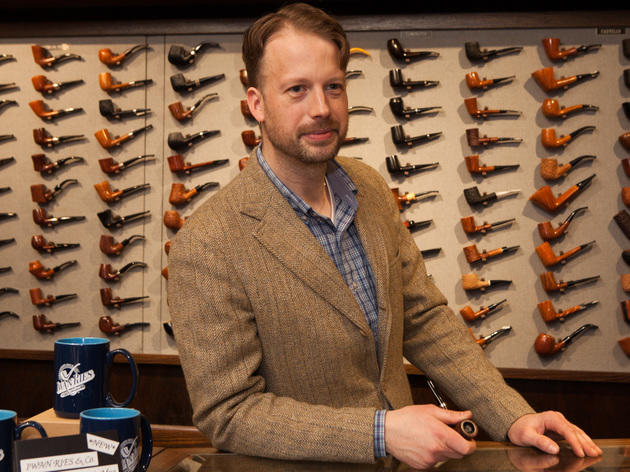 Tucked away on Jewelers Row, Iwan Ries & Co. is the oldest family-owned tobacconist in the United States, dating back to 1857—just 20 years after the city of Chicago was officially incorporated. Throughout the 1950s and ‘60s the company began developing its own private label tobacco blends and introduced a mail order service, shortly before moving into its current location at 19 S Wabash in 1968. Today, smokers can peruse a wide selection of tobacco, pipes and cigars at the Iwan Ries store or sit down for a puff in the Loop’s only BYOB smoking lounge.
Advertising 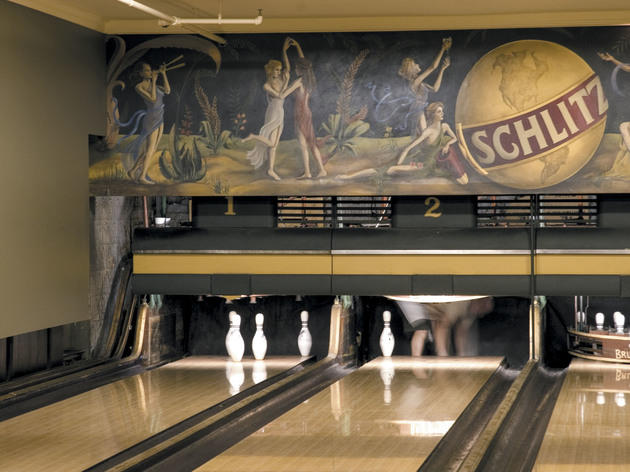 Located in a former Schlitz-owned pub, this Lakeview bowling alley clings to a simpler time when a malfunctioning machine was never in danger of ruining a perfect game. Before the mechanical pinsetter was invented in the 1930s, alleys were staffed by teams of pin boys who manually reset pins and returned balls to players. Southport Lanes is one of the few places left that carries on this old-fashioned (and somewhat dangerous) tradition, employing a pair of individuals who work behind the scenes, dodging balls, picking up pins and keeping games running smoothly in return for rolled bills stuffed into a ball’s finger holes. 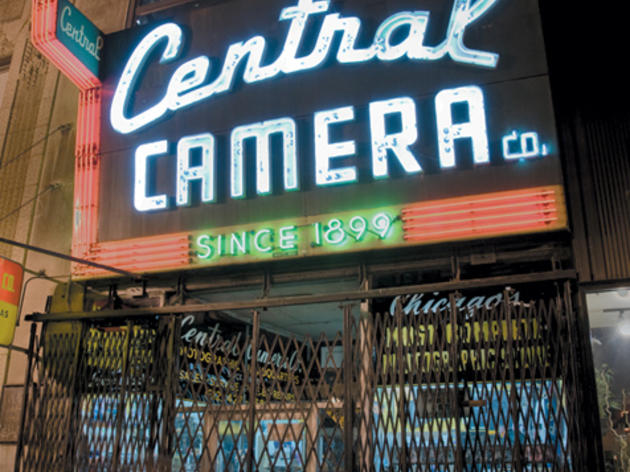 Whether you plan to go pro or you just want to look artsy while snapping pics of your shoes, this downtown emporium has everything you need, including hard-to-find film and darkroom equipment. The best part: Students get a 5% discount on almost all classroom supplies (cameras not included) with a valid ID. The neon Central Camera Co. sign is vintage perfect, too.
Advertising 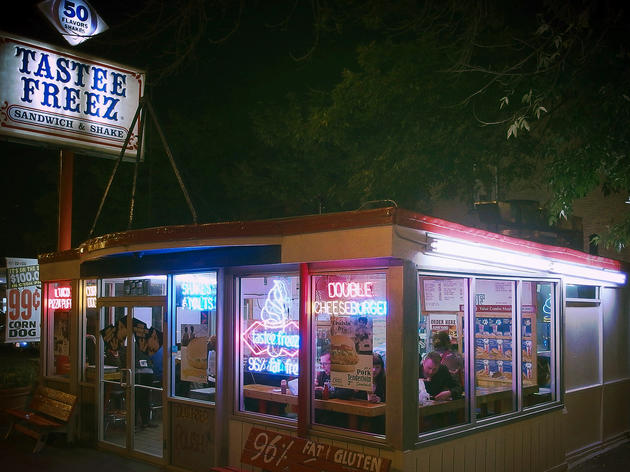 Tastee-Freez is a vintage time warp, and while there aren’t nearly as many locations of the fast food restaurant as once dotted Chicago (there were dozens), you can still find one in Logan Square. In the summer, there’s a walk-up window and picnic table seating. The savory items, like corn dogs and burgers, aren’t much to talk about, outside of living John Cougar fantasties of suckin' on chili dogs. The ice cream menu, with milkshakes, sundaes and soft serve, is the main draw.

Lincoln Square was once known as Chicago's Germantown, though most Teutonic traces have been erased, save for a mural, Merz Apothecary and the Chicago Brauhaus. This bastion of oompah fun, baron-sized beers and heaping platters of carb-tastic classics brings locals and tourists alike. The lederhosen-clad Brauhaus Trio performs nightly, packing the raucous dining hall with duos who dance zwiefacher-style (think polka with quick turns).
Advertising 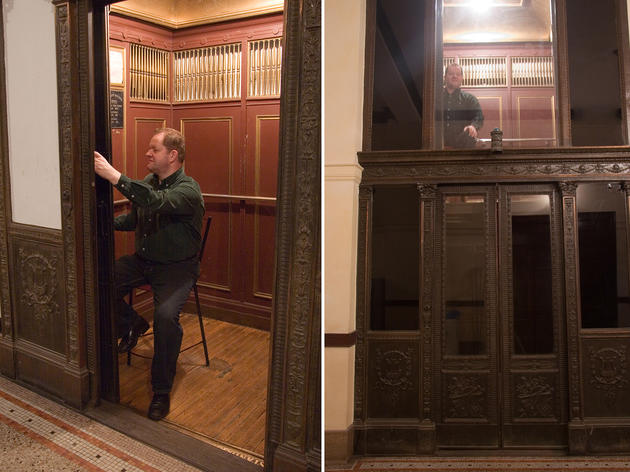 Attention, Wes Anderson fans! We loved The Grand Budapest Hotel so much we wanted to live in it. There is one old-world element of the film still in action in Chicago: the manually operated elevator. Now if only the guy working the controls wore a little cap and matching uniform. 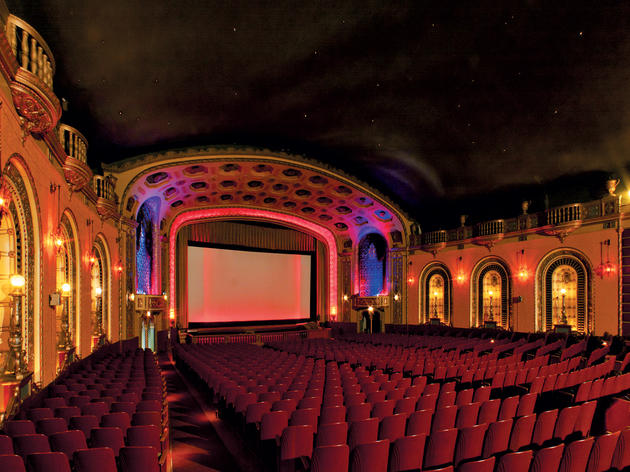 Before generic multiplexes began springing up, going to a movie meant putting on your Sunday best and stepping into an ornately decorated theater with a single screen, much like the Patio Theater in Portage Park. After opening in 1927, the Patio transitioned to showing second-run movies in the ‘80s before closing in 2001 when its air conditioning system broke. After a series of extensive renovations, the building was sold to Portage Theater owner Eddie Carranza in 2014, who began screening first-run movies and booking special events. Today, you can admire the beautiful lobby and see a film in the city’s oldest operating movie theater. 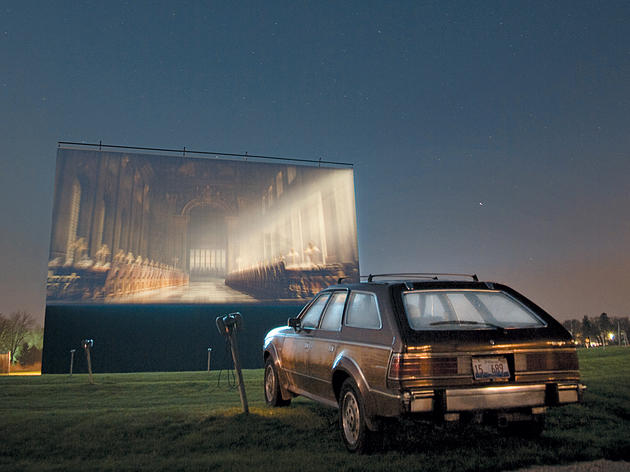 It's a bit of a hike out to suburban West Chicago (as in the city in DuPage County, not out on the Green Line), but Cascade is the last old-school drive-in movie theater in the area. The stereo audio comes in on 88.5 FM, or nostalgists can use the drive-in's in-car speakers. The season kicks off with the automobile-appropriate Furious 7 on April 13. 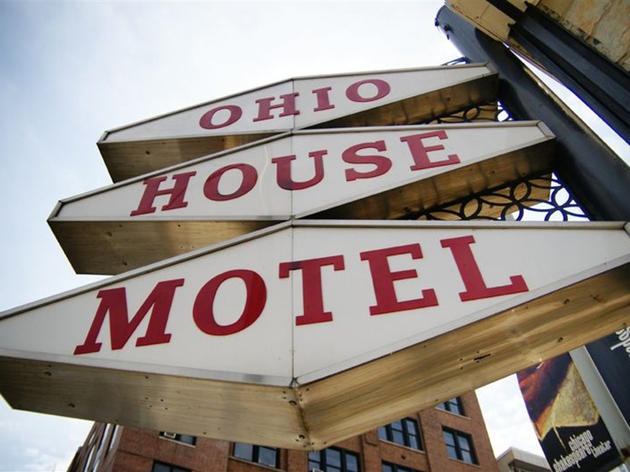 There are plenty of fancy hotels in downtown Chicago, but if you want to stay in a charming, historic, independent motel, you’ve got one choice: the retro Ohio House Motel. The motel, which opened in 1960, still has its distinctive diamond sign, although rooms have a contemporary feel and WiFi. It feels more authentic if you pull up in a wood-paneled station wagon. While the Ohio House Coffee Shop closed in 2014, local fried chicken restaurant Leghorn took it over, and now fried chicken sandwiches and breakfast biscuits are available on site.
Advertising 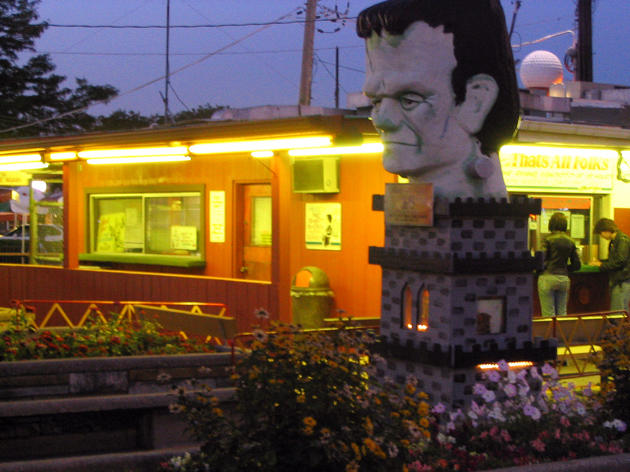 More commonly known as "The Bunny Hutch," which is technically the name of the hot dog joint across the parking lot, by the batting cages, this vintage gem on Devon and Lincoln is probably the most challenging miniature golf course we've played. The pedal-powered mechanical elements are delightful, animating the windmills and gates under giant dinosaurs and monsters. Try to "put it in the clown's mouth." It's not as dirty as it sounds. It's mini-golf slang. Really. 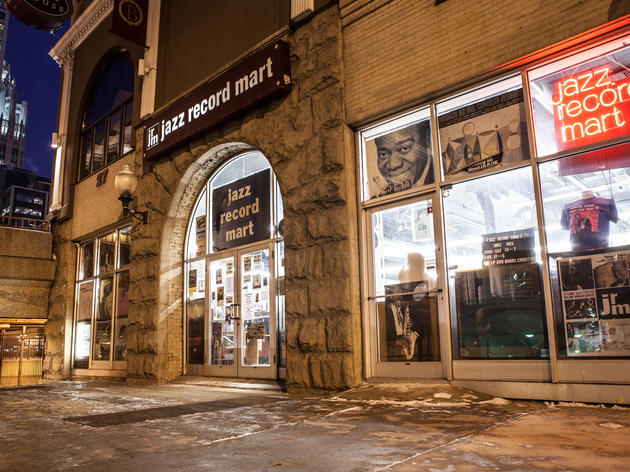 We take Jazz Record Mart for granted, but it's a vestige of a bygone area on a few fronts. Downtown Chicago was once filled with record stores—Virgin, Tower, FYE, Rock Records, etc. Now we are fortunate to have a Reckless branch in the Loop and this sprawling bastion. Bob Koester bought Seymour's Jazz Mart in 1959, relocating it in 1963. He was also a blues pioneer, owner of the Delmark label, recording Hoodoo Man Blues (our second greatest Chicago album ever made). Iggy Pop once slept on the couch here. You can pick up Kind of Blue on wax.
Advertising 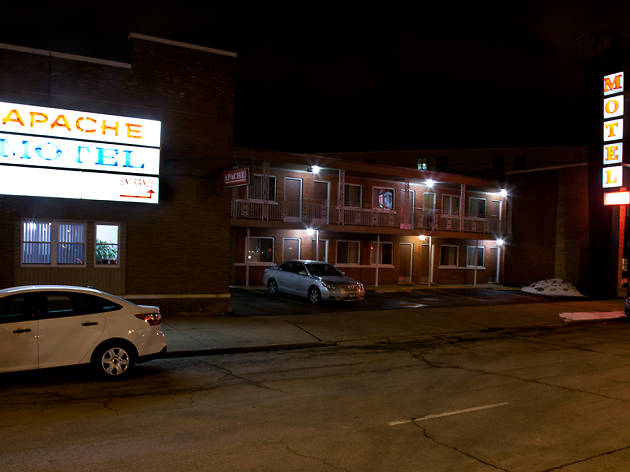 After World War II, the length of Lincoln Avenue between Foster and Peterson became known as Motel Row, a spot for vacationing families on their way to the Lake Michigan shore. The interstate highways killed that, and the cheap sleepers quickly went to seed. A few of the mid-century motels remain, like the Diplomat and the Summit, but the cool neon signs are largely gone. The Apache still has vintage signage—and vintage shadiness.
Recommended