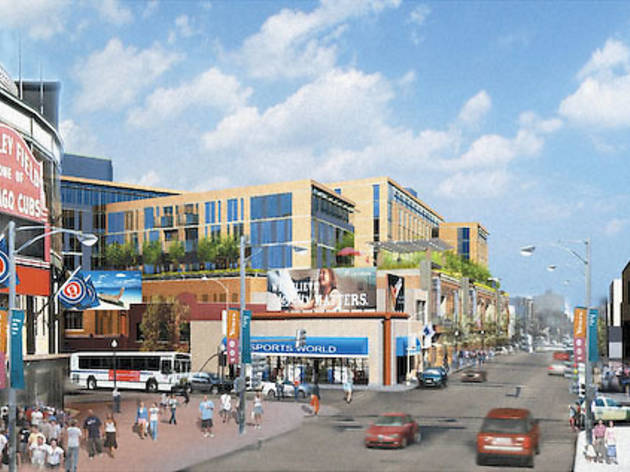 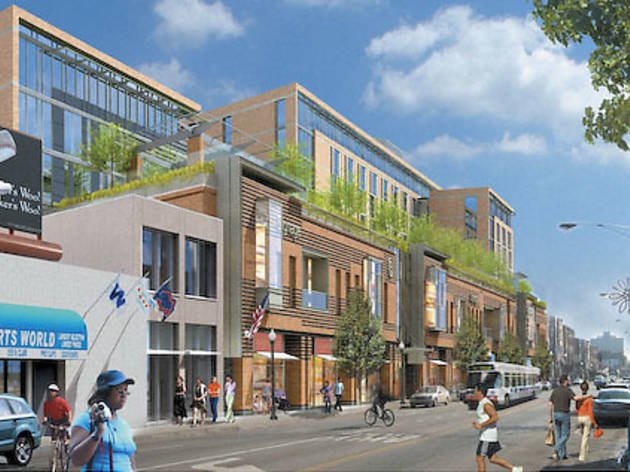 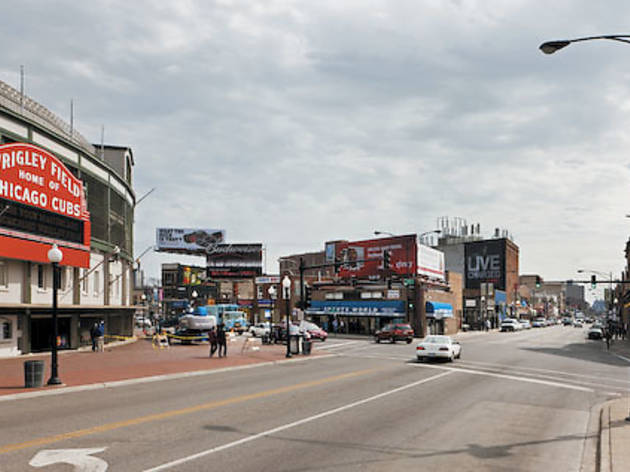 “Nobody is going to tell me that’s a great building,” says architect John Lahey, gesturing toward the dilapidated four-story structure above the Salt and Pepper Diner at 3537 North Clark Street. The president of Solomon Cordwell Buenz is making the case for his firm’s design for Addison Park on Clark, the controversial hotel, apartment and retail development planned for the southeast corner of Clark and Addison, across the street from Wrigley Field. When the wrecking ball arrives, which doesn’t appear to be happening any time soon, it will raze this building and at least a half-dozen others. We cross over to Addison Street, where Lahey points out more industrial edifices separated by vacant parking lots. “I remember coming here as a kid in the ’60s when it was a beat-up ballpark in a beat-up neighborhood. And the best thing about it was you could get seats anytime you wanted.”

Times have changed. In those days, no one much cared what was being built in Wrigleyville. But the former working-class enclave started booming in the ’80s, during the Harry Caray era. By the ’90s the neighborhood had morphed into the Bourbon Street of the Midwest, a party zone where flocks of unrestrained bachelorette partyers could throw back $5 cans of Bud at Sluggers alongside Cubbie-crazy suburbanites on an afternoon hall pass. Wrigley Field is now one of the top tourist attractions in Illinois, and real estate in the area sells for a premium. Developer Steven Schultz began snatching up parcels of land in the then-burgeoning entertainment district in the ’80s, eventually purchasing nearly the entire east side of the 3500 block of North Clark and most of the stretch of Addison between Clark and Sheffield. Now, Schultz and his partners hope that will be the footprint for the biggest transformation of the neighborhood since the Friendly Confines opened in 1914.

The plan, approved by 44th Ward Ald. Tom Tunney and his Community Directed Development Council (a group representing Lakeview neighborhood organizations and business leaders), passed the City Council last summer without dissent. It calls for 135 apartments averaging 835 square feet each with estimated monthly rents of $1,800–$2,000, 137 hotel rooms and more than 145,000 square feet of retail space. M&R Development, the company overseeing the project on behalf of Schultz, touts its many pluses: 500 jobs created; widened sidewalks; an environmentally friendly LEED Silver–certified design; and a much-needed hotel for Cardinals fans and other visitors.

The design has gone through many changes since it was introduced more than three years ago, which Rob Nash, public outreach manager for the project, credits to the more than 30 meetings the development team held with community organizations. In early versions, the hotel tower stood 22 stories tall, dwarfing Wrigley Field; now, the drawings call for the brick- and glass-faced structure to feature an eight-story tower, approximately the same height as the AT&T building immediately to the south. The Clark Street side, originally a monolithic slab, was broken up with what Lahey refers to as “eccentric slots and bays” and differing brick patterns that showcase the individual storefronts. The residents’ requests for parking were granted, to the tune of 399 underground spaces. “I thought they did a good job listening to the community’s concerns,” says Diann Marsalek, president of the Lake View Citizens’ Council.

“The most exciting thing, from a business standpoint, is the hotel. There are very few hotels in an area that has very high tourism,” says Bennett Lawson, deputy alderman for the 44th Ward. Lawson points out that, along with Cubs fans during baseball season, the area’s gay and lesbian events draw a half-million people a few weekends a year.

Still, some residents say the design—even with the changes—resembles a strip mall. Last May, leading up to the City Council vote on June 30, more than 13,000 people signed up for a Facebook page called “People Against the Malling of Wrigleyville.”

“It’s going to stick out like a sore thumb,” says Ken Vangeloff, 49, who has lived a few blocks from Wrigley for 15 years. “What they originally proposed was preposterous. This way, the alderman comes off looking good: ‘Look at how far we made them come down.’ The greatest thing in the world is you have Wrigley Field as the centerpiece of the neighborhood. But you drop this eight-story building down and it’s going to be hideous.”

The fact that Schultz has referenced chain stores such as Best Buy and CVS as potential tenants hasn’t helped change opinions that the project could sap the neighborhood of its diversity and character. (No retailers have been finalized at this point, Nash says.)

“My biggest fear is [the retail portion] winds up being empty,” says Charlie Schmidt, president of the Hawthorne Neighbors, one of four community groups whose areas border the project. “If a Best Buy could work there, more power to ’em. But I don’t know who would go to Best Buy across the street from Cubs Park. I wouldn’t.” Equally distressing to some opponents is the loss of the iconic iO improv theater, Goose Island brewpub and other existing businesses that could be forced out.

For his part, Lahey, the architect, is confused by criticism from some local businesses and residents that his design is somehow “suburbanizing” the neighborhood. “What’s suburban about a building that has retail, that defines the street wall and has high-density residential next to an urban-transit stop? That’s about as un-suburban as you can get,” he says.

But the Cubs could six-peat as World Series champs before a single shovel is lifted. After receiving City Council approval, M&R Development expressed hope to the construction-trade press that it would break ground as early as this spring. But as of press time, no construction permits have been issued and there is no indication that financing has been secured for the estimated $100 million project. One of the conditions from the city is that the developers will not begin demolition until they receive full financing; and once the construction begins it must continue uninterrupted, to minimize the impact on the neighborhood

“I can’t give you an expected start time. But once the process begins, it’s expected to take 18–24 months to complete,” Nash says. “We don’t anticipate a problem [with financing]; we’ve had a great deal of interest. But obviously the financing has to be worked out. And in today’s economy that is more complicated.” Nash also points out that M&R Development—which is leading the hotel and apartment components—has an equity stake in Addison Park on Clark, which speaks to its commitment.

But although Hyatt Corporation is listed as the potential hotel partner on the Addison Park on Clark website, and Nash says Hyatt is still interested in the site, Laurie Cole, Hyatt’s director of corporate communications, says there’s no formal agreement at this point.

And at a recent Wrigley Field Annual Advisory Community Meeting, when an audience member asked Cubs vice president of community affairs Mike Lufrano for an update on the long-stalled Triangle Parcel development on the southeast corner of Clark and Waveland, he compared the Ricketts family’s funding struggles with the Addison Park on Clark project, saying both projects were “in the same boat.”

Deputy alderman Lawson stresses the quiet period is not atypical for a project of this size. What the city has approved is called a Planned Development, which is an envelope for the parcel of land that includes the underlying zoning, fixed height and square footage, and general usage. Putting together the construction documents and navigating the permitting process can easily take more than six months, he says. “There are some specific things [the development team has] to do for this project; for example, the city has to vacate an alley. So while they’re finalizing their construction plan and financing, we don’t hear a lot from them.”

“I don’t think anybody knows anything,” says Charna Halpern, founder and longtime owner of iO, and the project’s most vocal opponent last summer. “I’ve gotten calls from staff at Goose Island and Salt and Pepper asking me [about when the demolition might begin], ‘Do you know if it’s going to be in a year? Am I going to lose my job?’ ” According to Halpern, the contract with her landlord (Schultz) requires she be given at least one year’s notice before having to vacate. She has yet to be notified “and I don’t expect that to happen for a while,” she says. Schultz’s office did not respond to inquiries, but Nash says Schultz typically does not comment on the details of private agreements. (Interestingly, Halpern and Schultz are cousins.)

Nash also stresses it’s incorrect to assume none of the current businesses will return. “The spaces that are designed would accommodate virtually every business that’s currently on the site,” he says. “It’s hard for a business to shut down while construction is going on. But for those that have the interest and the wherewithal, and the space works and the terms work…they would certainly be welcome back to the development.”

With ongoing negotiations likely occurring between existing tenants and Schultz, none of the businesses contacted along Clark Street responded to questions about their plans once—and if—the project moves forward. The only business that has confirmed it won’t return is iO. In past reports, Halpern said she was originally told she was going to be included in the new development, but there are no theater spaces in the current plans. Last summer, Halpern said she had her eye on a new location in Lincoln Square, but she now says she’s looking “anywhere and everywhere.” The only place she will not relocate, she says, is the 44th Ward, where she feels Ald. Tunney could’ve gotten more involved on behalf of the affected businesses.

But others in the neighborhood credit Tunney with helping shepherd a project that could ultimately have a positive impact on the neighborhood—especially on the nearly vacant Addison side. “He’s kept [the developers] on the straight and narrow,” says Schmidt, of the Hawthorne Neighbors. “We’re setting a precedent. [If we’re not careful] Wrigleyville could become a Disneyland here in the Midwest. You have to be very cognizant of the fact that whatever you’re promising could come back to haunt you.”