The trend for industrial interiors has reached ubiquity in Zagreb, where bare-brick walls and naked hanging lightbulbs are increasingly common touches in bars and cafés. The uniformly modern decor of Zagreb's newer haunts doesn't represent the city's taste for homely bars and pubs, though. Warm, welcoming and slightly rough-around-the-edges, these cosy bars are as traditional as they come. In winter, there's nothing better than lounging around on a shaggy sofa, sinking a pint with the hospitable hum of chatter in the background. Here's our pick of traditional boozers to warm up in when its cold outside.

RECOMMENDED: the best bars and pubs in Zagreb. 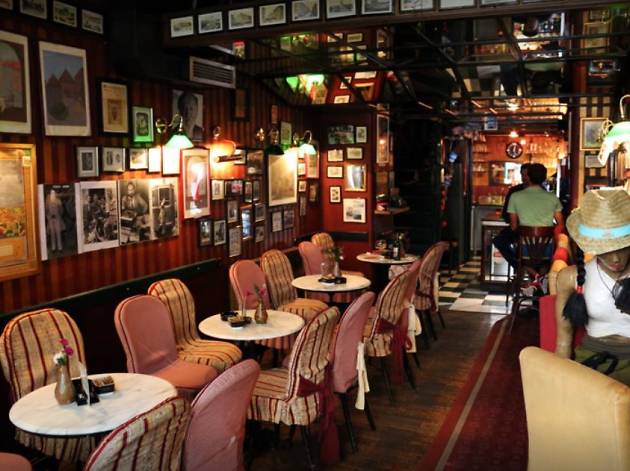 Founded by famous Zagreb-based journalist and writer Zvonimir Milčec, this cult, bohemian bar-cafe sits seconds away from Zagreb's central square but somehow feels like a timeless escape from the bustle of the city centre. Its small entrance gives way to a reasonably long seated area whose walls are decorated with a constantly-changing display of local art plus pictures and memorials of the late journalist's life and achievements. The premises remains in the hands of his family, who uphold the warm appeal and original ethos of the bar, welcoming anyone from students and artists to young professionals and tourists but, truth be told, nobody would look out of place here. Coffees and teas, craft beers and all typical bar fayre is available, served by friendly and efficient staff who always have some interesting but not intrusive music playing on the house soundsystem. In summer, the outdoor terrace is lively and full, in winter, there are few cosier bars in Zagreb you could hope to be in. A taste of real Zagreb. 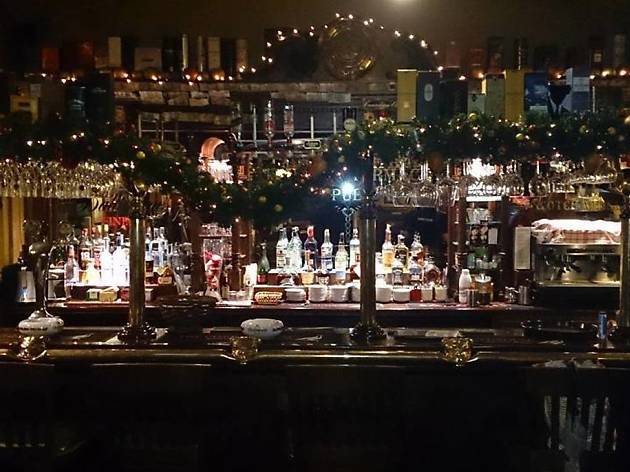 A classic-looking old pub: a mirror behind the brass bar, pharmacy-related sepia photographs and vintage adverts crowding the walls, and dark wood everywhere. A couple of screens are tuned to football matches on big European nights, although they're unobtrusive enough not to ruin the evening for non-sporty types. The no-smoking section in the back is full of leather armchairs and cosy corners, perfect for an intimate chinwag. There is a wide assortment of beers but also, and importantly, a menu of Irish whiskeys, scotches and bourbons. Nice place to start the evening with a band of good friends. 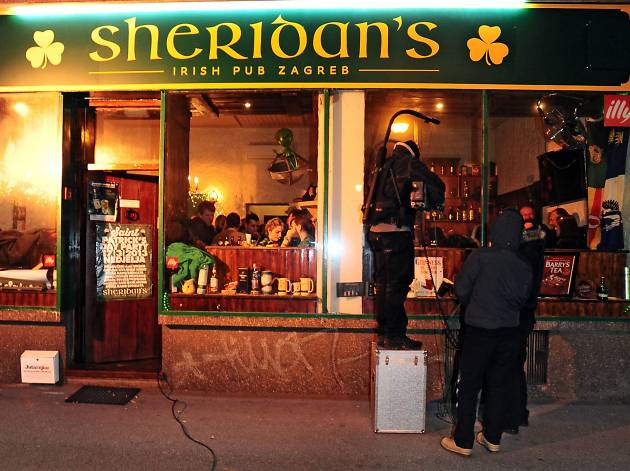 Compared to Vienna, Budapest or Ljubljana, Zagreb contains a relatively modest number of faux pubs. This is the best of a motley bunch – and the best loved. Cosy, communal and staffed by sweethearts, Sheridan’s encourages a loyal if limited regular custom with pub quizzes and craft brews to complement the mainstay draught option of O’Hara’s – the nearest you’ll find to Guinness. Darts, TV football and occasional live music sessions provide further entertainment. 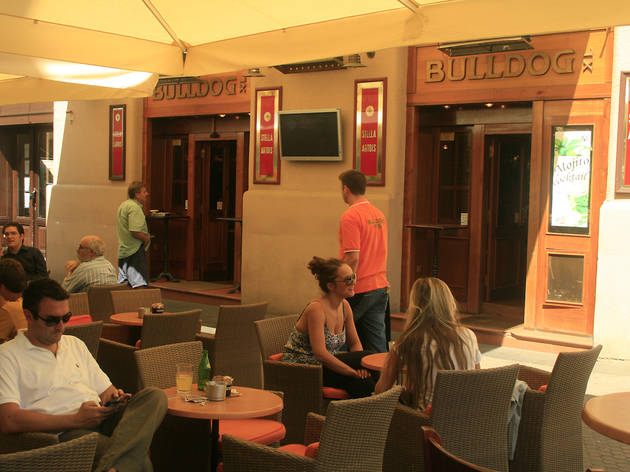 The anchor of the café and pub scene on the buzzing street between the Hotel Dubrovnik and Flower Square (parallel to and one street south of the main square), Bulldog offers something for everyone. The interior is upscale: electronic sliding-glass doors; big flat-screen TVs for match days; a wide selection of Belgian beers on draught; cocktails; wine; and the standard list of coffee concoctions. A terrace leads to a boat-shaped front room with its giant-paddled, propeller-shaped ceiling fans, deck flooring and mezzanine observation level. Downstairs, a club, with green leather chairs and marble tables around a bandstand, hosts pop-rock cover bands, blues and jazz at weekends, no cover charge. 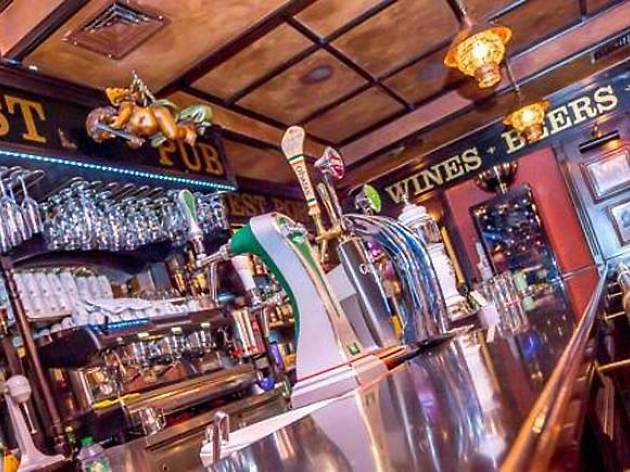 Smack in the middle of Tkalčićeva, Oliver Twist has a giant terrace with a beer-garden feel and goes elbow-to-elbow when the weather is nice. Inside, they serve Kilkenny and Guinness on tap under the words: 'Oliver Twist Pub Finest Porter'. There are also pictures of 'Jack Daniel: Our Benevolent Sponsor' and newspaper etchings of Charles Dickens' trip to America. Scattered among the three floors and around leather couches and under wooden-beamed ceilings are books, Dickens memorabilia and the occasional suit of armour. The crowd is all ages but leans toward the younger set. 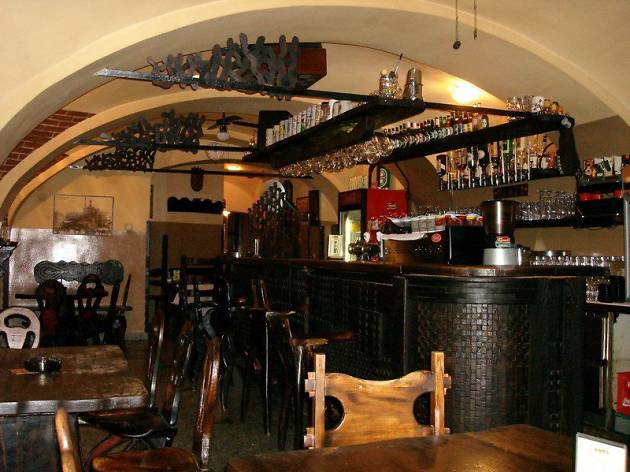 It simply doesn't get any more local than this. And, you'd be hard-pressed to find a place more central. Located in an alley just metres north and west from the main square, this passage was once used to stable Ban Jelačić's horses. The patio spills into this passage. Inside, it's a real bar – everything is wooden and people are there to drink. There are pictures of old Zagreb strewn about the two rooms and lots of beer – Kilkenny, Paulaner, Erdinger and local drafts – and liquors to keep folks happy. 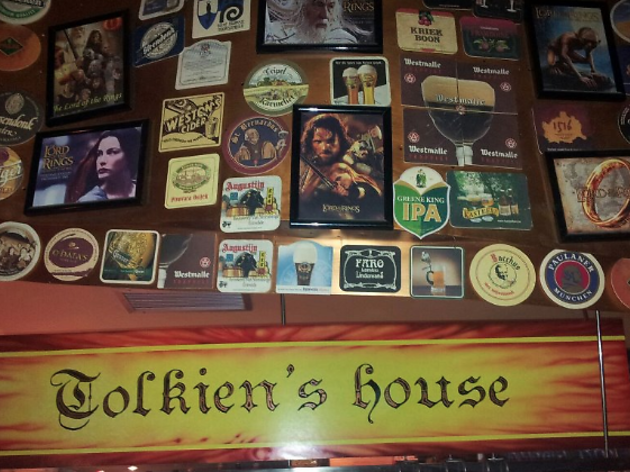 An early adopter of American-style craft beers, as well as cask ale imports and local Croatian favourites, Tolkein's House has been on the progressive beer and ale trail for years now. It's name would suggests a full on fantasy theme, but could disappoint Tolkein geeks hoping for a quirky bar-cum-attraction. This isn't really a hobbit-house but a local's pub, with a few Tolkein-themed knick-knacks adorning the walls. It's a lively place, especially during weekends, head there early to guarantee a table. 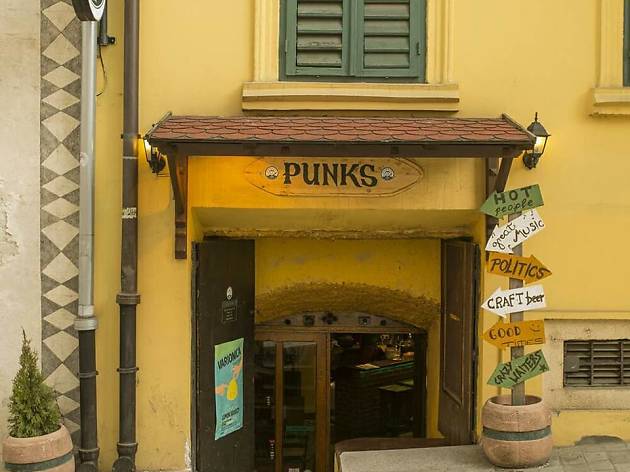 The English translation of this establishment's name is pub at the end of the world. Its title feels appropriate, not just because you might be taking the steep road up to the top of Mesnička, where the bar is placed, on a hot day, but also because you might end up questioning just why. There are very few reasons a visitor should find themselves in this part of the city, outside this cellar's doors. After walking down the stairs inside, such questioning may linger; Pub na kraju svijeta, with its worn seating and ultra relaxed air does not immediately impress. But, there's a nice selection of craft beer on draught here. And it's relatively cheap too. Nova Runda's strong C4 IPA is 26 kuna a half litre and the house beer, a Red Irish Ale made by Zmajsko, is just 18 kuna for the same. Half a pint in, the climb forgotten, the bar's limited charms unfold. Each of its tables houses a board game/drinking game with čovječe ne ljuti se, Rick and Morty, chess and Pokemon among those featured. The soundtrack is good too, although perhaps lucky is the customer who visits when they're playing vintage ska rather than the more rowdy punk and hardcore heard at other times. The cellar is also at least a couple of degrees cooler than outside, but it's maybe not a place to visit alone. A buddy with whom you want to chat or a group of mates who'll drink a couple would be perfect companions here. 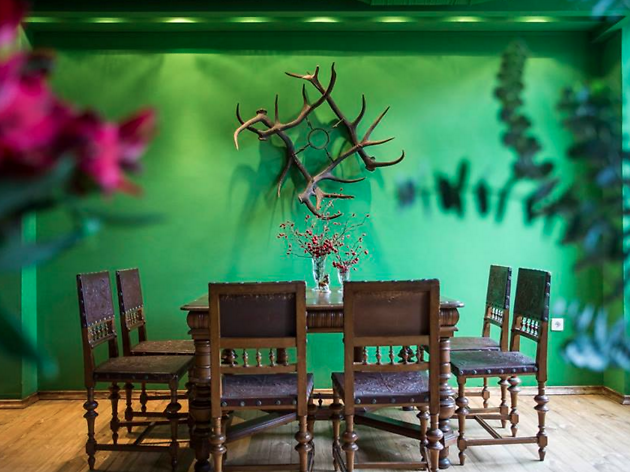 Zagreb’s first real craft beer pub, this should be your first stop for new releases from regional breweries. There are 12 beers on tap – around half of these are local, with one or two from the UK and Germany. There are also more than 150 bottled options.. The atmosphere gets a bit headier on weekends. A DJ plays from a catalogue of funk, blues and rock ‘n’ roll, and the place fills up quickly. Phone to reserve if you’d prefer not to jostle for a table. 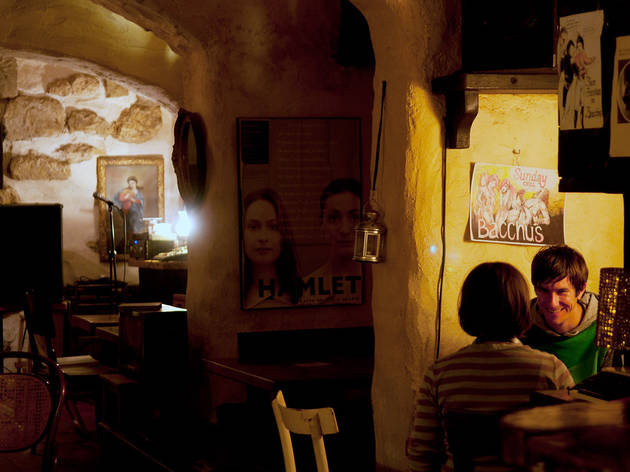 Just off the first square as you walk up from the station, the Bacchus Jazz Bar is an ideal place to meet friends, listen to jazz and either have a civilised party evening or get revved up for what's to come. Relaunched as a jazz bar in 2008 after several years on the social margins, the bar exudes a homely Dalmatian feel: the owner is from Split, and there's a fig tree next to the terrace, which is tucked into a passage off the street. Inside you'll find a hodgepodge of wooden furniture: a 1960s-era television and telephone, and wooden-plank floors under a brick ceiling. It's almost always busy, so tables will be at a premium. Wines, mainly Dalmatian, have been chosen to suit the mood. There are cocktails too, but few seem to be paying them much attention. Live jazz on Fridays.