The essential guide to cycling in Istria

Travelling along Istria’s many biking trails is an ideal way to get an up close and personal view of the peninsula.

Trails here shine a special light on its villages and character. You’ll also get a sense of the area’s history, which saw a succession of controlling groups starting with tribal Istrian clans, which submitted to the Romans in the third century BC. There are reminders of the different rulers and their prevailing architecture at every turn of the handlebars. The pedalling is a mixed bag. There are asphalt-only routes, where cyclists are comfortable atop the skinny wheels of their road or touring bikes. The 93.5-kilometre (58-mile) Montanara Trail climbathon from Umag, which loops northern Istria, is a fine example of such a route. For the most part, plan on a mountain-bike demanding a combination of asphalt and macadam in varying ratios depending on preference. In total, 2,600 kilometres (1,615 miles) of trails stretch across Istria in every direction. It makes recommendations for bikers’ hotels, hire companies, sights to visit on the way and solid dining venues. If you are a mountain biker or experienced road cyclist who prefers to enjoy their landscapes through wraparound lenses rather than a car’s windshield, the first thing you’ll notice here are the rolling hills and the seemingly endless possibilities for being on two wheels. If you’re not a seasoned rider, you’ll love the chance to spin around Rovinj (p54), for instance, at human speed while soaking in the culture. You’ll see the constant stream of fellow bikers hugging paved roadside shoulders or gliding along macadam byways. And if you are gastronome with a need to grind gears, you’ll have the chance to earn that post-ride bowl of pasta smothered in truffles at trail’s end. 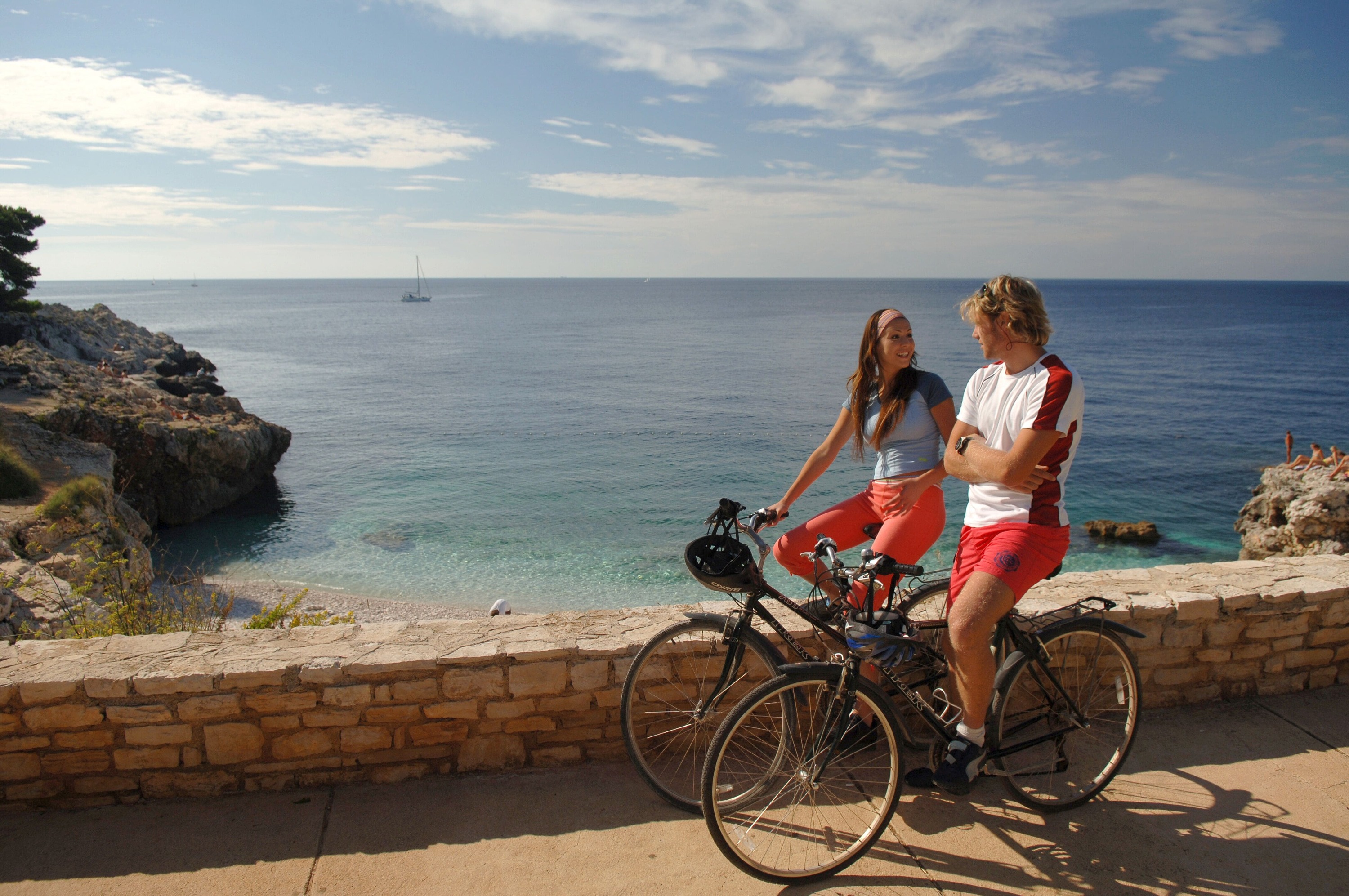 The most numerous trails are found in the undulating terrain of the interior. One combining both grit and gourmet is the Truffle’s Trail, which is about 60 per cent tarmac riding (40 per cent asphalt) and begins and ends in Buzet. Starting at the foot of the Ćićarija Mountains (p131), the route covers nearly 35 kilometres (22 miles) and takes three hours to complete. The elevation gain is 870 metres (2,850 feet). Buzet, known to the Romans as Piquentum, was the seat of Venetian government in Istria; its architecture, including two town gates and a Baroque well, serve as reminders. Equally importantly for today’s riders, it is also the City of Truffles. From here you’ll head south and begin an almost immediate steep climb, and then skirt below the hilltop village of Vrh. At this point the trail dives and soars until it again starts to head north following the Mirna river. At the two-thirds mark and after a descent, the path makes what has to be considered one the best-planned ride stop-offs in Istria: the Yugo-era thermal spas of Istarske Toplice. The Bella Vista trail, which begins and ends in Labin (p150), is filled with what its title suggests: magnificent panoramas of Kvarner Bay and a continuous string of photo-ops. This easy-going to moderate trail is three-quarters asphalt so there’s less need to worry about loose stones when readying the camera. The route travels 33 kilometres (20 miles) and should take roughly two hours to complete. The loop leaves the Old Town main square of this art-filled city and first heads inland, down the tiny, mini-peninsula in which Labin sits at its most northerly point. The route stays at between 300 and 500 metres (985-1,640 feet) in altitude until it reaches the Skitača mountain hut. About one kilometre away is a spring called the ‘Tears of St Lucia’, which, according to legend, can help those with bad vision. From here, you’ll be bombing it downhill until Ravni beach.

Take a swim and enjoy the rest – you’ll need it for the steady 14-kilometre (nine-mile) climb along the eastern seaside rim of the trail back to Labin. For culture, the St Euphemia trail, which rolls through Rovinj, is an ideal choice. A medieval town that was an island until 1763, when the channel separating it from the mainland was filled, Rovinj is Istria’s main tourist attraction, with scores of galleries, fine restaurants and a posh atmosphere. St Euphemia refers to the grand church atop the hill guarding the city.

The ride takes in Rovinj’s sights with a majestic view of the town and the Adriatic beyond. The circular route starts just south of Rovinj at the campsite in Polari, a coastal resort. A straightforward 27-kilometre (17-mile) ride with negligible altitude change, it spends the majority of its time on asphalt. The jaunt takes about two hours and passes a good handful of medieval churches while travelling north and inland before heading south and back to the coast. It also comes within a stone’s throw of the Limski kanal, best known for its oysters. Up the coast, the Trail of Captain Morgan and Casanova are two rides that straddle the Limski kanal and provide a quirky microscope on Istrian history. As the story goes, pirate Captain Morgan hid his treasure and himself near the canal while on the run. This moderate biking route, of equal parts path and road, starts just south of Rovinj and makes a 61-kilometre loop around the canal’s head, through the town that bears the pirate’s name – Mrgani, where his treasure is reportedly buried – before travelling south again through the beautiful cobbled town of Bale. On the north side of the canal, the Casanova trail is a quick, easy 22-kilometre (14-mile) ramble which begins and ends in Vrsar, where the famous lover visited on two occasions in the 18th century for wine and women. The route follows much of the length of the Limski kanal, moving east from the mouth. More than 75 per cent tarmac, it is a roll through the country and relatively flat, so the trip should only take 90 minutes. One of the longest and most challenging trails is the Motovun East ride, completely asphalt and cycle-friendly. At 72 kilometres (45 miles) it should take about four hours, but be warned that this route gains a total of nearly 1,500 metres (5,000 feet) en route. The circular ride starts with a heavy climb to the perfectly preserved Old Town of Motovun which stands over the truffle-filled forest and Mirna river below. This view attests to the town’s former status as Istria’s communications hub. Past the Butoniga Lake, the road rushes by the medieval settlement of Draguć and down to Istria’s administrative centre of Pazin and its castle built in 983. From here it is mostly a descent back to the car park at the bottom of Motovun.