Nestled between the salty Adriatic sea and the freshwater Vrana lake – a far cry from any urban hustle and throngs of tourists – Pakoštane is the spot for anyone seeking total relaxation on the Dalmatian coast. 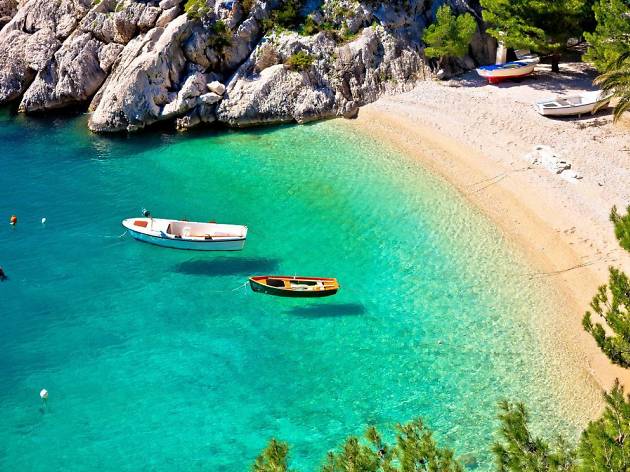 Pakoštane’s beaches cover the works; from sand and rock to gravel and concrete. The landscaped seaside walk to the neighbouring village of Drage (500 metres away) doubles as a stretch of beach where you can set up camp in your own personal cove for the day. The sandy beach of Bužakovina is located on the outskirts of Pakoštane in Pine Beach Resort. Its shallow waters and shade-providing pine groves provide the perfect family environment. If you like people-watching on the beach, Punta is much closer to the town centre – and much more crowded. Here, sunbathers can choose from pebble or concrete tanning beds, while swimmers wade their way to submerged stretches of sand. Punta also rents out sun chairs, sunbrellas and pedal boats. Near the town centre, Janice beach is Pakoštane’s longest and a treat for all who value space over crowds. 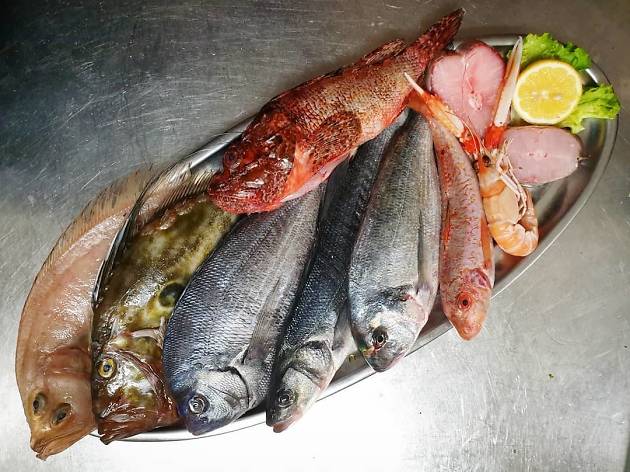 Like in much of Dalmatia, when it comes to food Pakoštane is totally sea-centric. The town’s fishermen set out to sea every day providing Pakoštane (and its lucky tourists) freshly caught fish year-round. Local favourites include dentex, named after its mighty fangs, and also considered the Adriatic’s most sought-after fish, and seabass. In Pakoštane, eating fish means drinking wine. The white Maraština is among the first of Pakoštane’s protected varieties and red Plavina is also beloved (especially when mixed with a splash of spring water to make bevanda). During the annual Materine užance (Mothers' customs) summer festival, you can try local delicacies such as savoury čućci (broad beans), gnocchi made by hand from local grandmas, hobotnica na lešo (boiled octopus), shellfish and pršut (prosciutto). Sweeten it all up with fritule (fried dough balls), kroštule (crispy fried dough) and mendele u cukru (sugared almonds). Just act quickly or the best goodies will be gone before you blink. 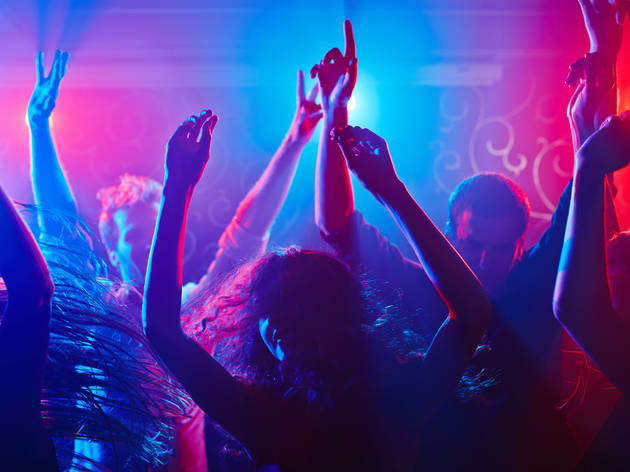 It’s a well-known fact Croatians love their coffee culture all day, every day. But what happens when the sun goes down? Pakoštane is home to several hotspots that have all your late-night revelry needs covered, from casual cocktail sipping to dancing your stress away. Chico Bar is a good place to have a good time. Located in the centre of Pakoštane, it’s easily accessible for an impromptu night out – and the prices won’t break the bank. If sweaty clubs or late-night bars aren’t your thing, but you’d still like to blow off some steam, Pakoštane has an annual Ribarska noć (Fishermen’s night) – a traditional event that sees food and drinks stands set up all along the town’s seafront. It’s often accompanied by traditional music; think UNESCO-protected klapa singing (most often an acapella group singing decades-old love ballads, sometimes for lovers and sometimes for the sea). 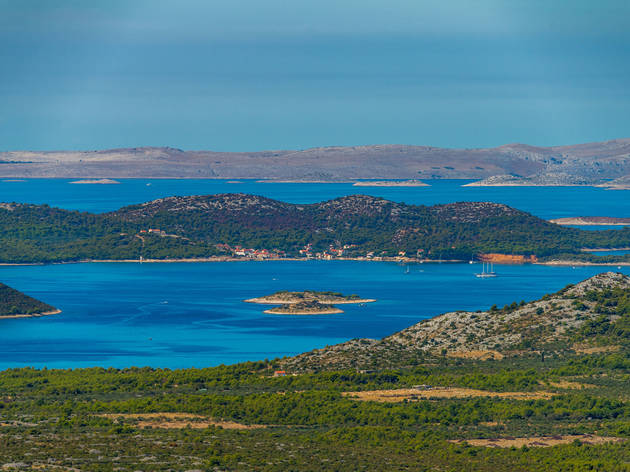 Thanks to Pakoštane’s dreamy location, visiting Croatia’s largest freshwater lake is no problem – and also a no-brainer. Once a bog, the area was drastically transformed into the nature park now known as Vransko jezero (Vrana lake). This was done in the 18th century as a result of a revitalization and landscaping initiative by locals, in tandem with the royal Venetian Borelli family. Less than a ten-minute car ride away from Pakoštane, the lake is more than worth a visit. Not only to admire the spectacular views, backed by the Adriatic and surrounding islands, but also to explore Roman ruins (dating as far back as 800 AD) and observe the diverse range of animal species, including migratory birds, jackals, foxes, rabbits, partridges and wild boar. 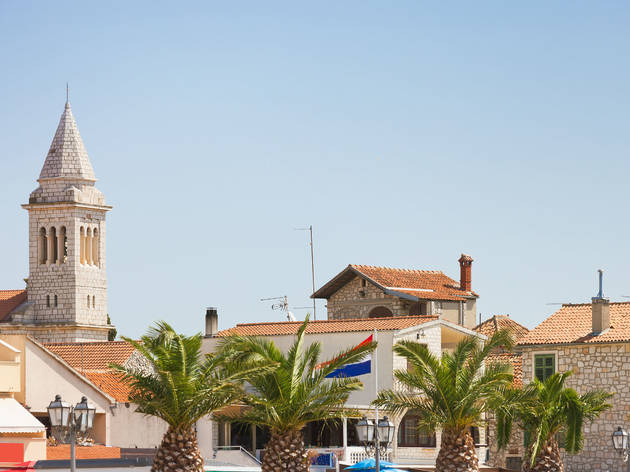 In Pakoštane’s centre sits one of the municipality’s most crowned jewels; the famed Church of the Ascension (Crkva Uzašašća Gospodinova), built in the 17th century. The church overlooks a human-sized square, which, like its surrounding streets, features cobblestones and stone buildings smoothed and lightened by centuries of Mediterranean sunshine (and pedestrians). Stroll through the streets, stopping to taste ice cream at the many cafes that dot the town (try the famous ice cream by Croatian company Ledo) or for a coffee break. Admire the Pakoštane riviera and its turquoise waterfront, where proud fishermen continue centuries of seafaring traditions each day. 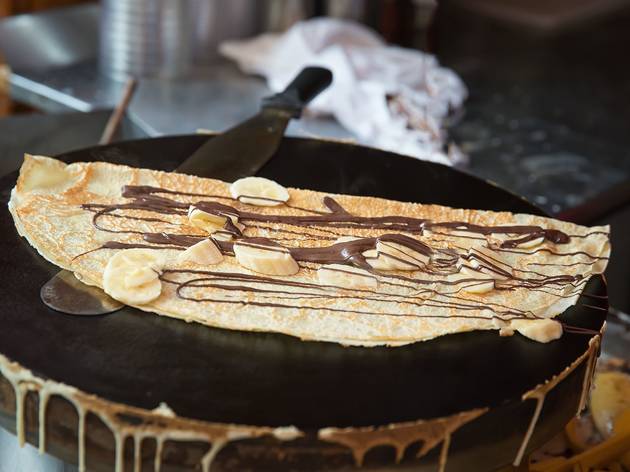 Just a few strolls from the central Church of the Ascension hides an underrated creperie (if we can call it that) which serves authentic Croatian palačinke (a dessert similar to crepes). This is a hole-in-the-wall where a local mother named Tanja opens up the ground-floor window shutters of her traditional stone abode – and sells pancakes right out of her kitchen. Tanja’s palačinka business faithfully springs up each summer, when she makes each happy customer a fresh, hot-off-the-press palačinka. With palačinke filled to the brim with Nutella, bananas, jam, powered sugar or any other topping or spread you find worthy (Tanja’s got em all), it’s no wonder there are lines that stretch around the block all summer long. 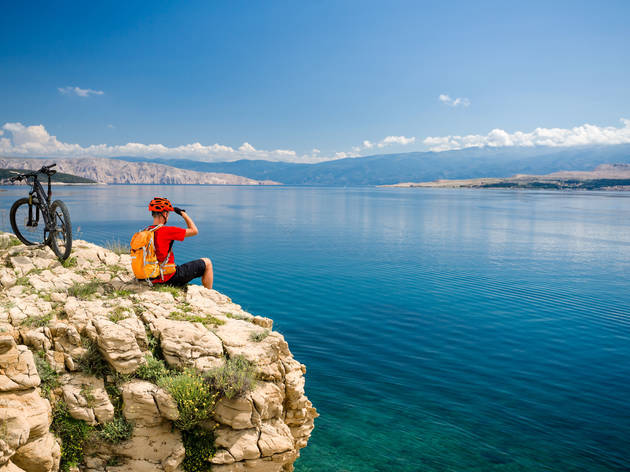 Pakoštane’s most popular bike paths have been dubbed Routes 4, 5 and 6. If you’re an expert, opt for Route 4, the most demanding of the three. Be sure to stop at “Sign 537” – a rest stop with 360 views of the amazing area and surrounding sea. You’ll round out your Route 4 trip with an up-close-and-personal view of Vrana lake before circling back to Pakoštane. Route 5, on the other hand, is perfect for amateur cyclists. Starting from Pakoštane’s neighbouring town of Biograd, the trail offers stunning views of Vransko polje (Vrana fields), where earth meets water before you pass through Pakoštane. The final stretch back to Biograd (this is a looping trail) includes views of maquis shrublands, a unique Mediterranean biome. Route 6 is the shortest and easiest path of them all, and family-friendly to boot. You’ll pass by Pakoštane and Biograd, along the way catching sight of the Vrana fields and lake. 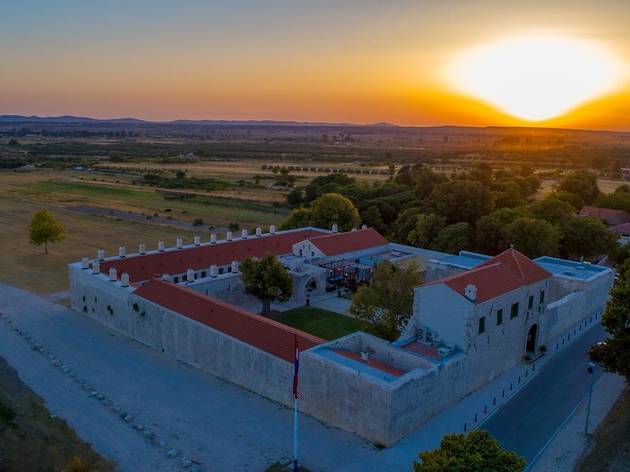 The Ottoman Empire left an impact on Pakoštane, which is visible to this day and has been turned into a tourist experience. You can see it for yourself with a visit to Maškovića Han in Pakoštane’s neighbouring town of Vrana. Here sits the largest Ottoman monument in Croatia. Silahdar Yusuf Pasha, who went by Jusuf Mašković in Croatia, was both a Croat and Ottoman admiral who built the local han, or Turkish inn, as his own personal mansion and residence. You can relive his regal dream by staying at the hotel located onsite. It consists of 14 guest rooms, two suites, a reception, restaurant, souvenir shop, wellness centre and a small museum showcasing the property’s interesting past. 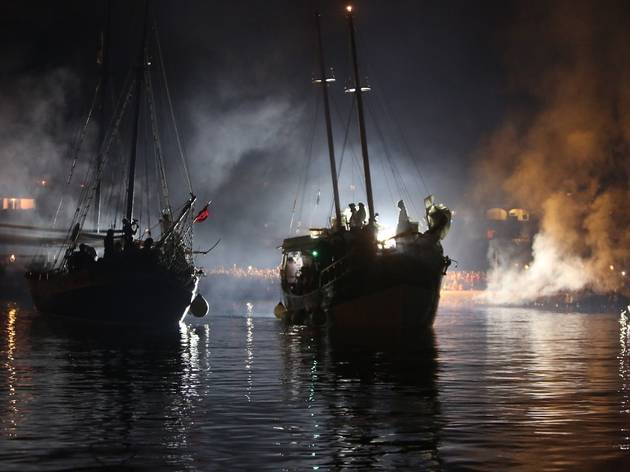 Continue exploring Ottoman imprints on Pakoštane and the region by attending a modern-day medieval sea battle (a reenactment, that is). During the time of the Ottoman Empire, Turkish and Pakoštane citizens would often face off right in the Croatian town’s port as they fought over the prized Dalmatian land. During the recreated sea battle, gawk at the flaming arrows thrown, gasp at the screams of ship cannons firing from both sides, and cheer at the celebratory fireworks at the end as the people of Pakoštane emerge victorious. This unique tradition usually takes place each summer during the month of August. 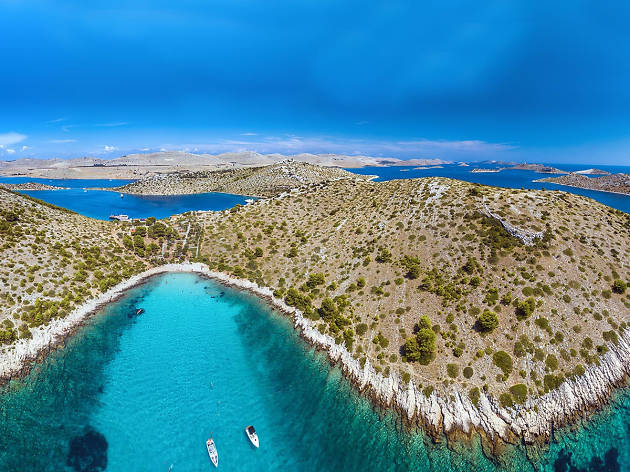 On the opposite side from the Vrana lake, and across the sea, Kornati National Park is an amazing archipelago consisting of 89 unique islands (some of which feature a surreal moonscape), reefs and craggy cliffs galore. Pakoštane is well-prepared for the neverending desire to visit the islands so you’ll find excursion boats leaving every day from the town’s waterfront; many offer complimentary tastings of locally made rakija as you cruise. Between sails, you’ll have stops on many of the islands, where you can cool off with a swim. Just don’t be surprised if you get caught by a peeping Tom Billy. Locals commonly transport by boat their goats, sheep and donkeys to the islands from the mainland to graze – for days at a time.