Find the best restaurants, bars and things to do in Edinburgh's Old Town with our insider’s guide to the area

This is Edinburgh. Forget the coast, the New Town and the urban sprawl. These days the city boundaries may stretch from Queensferry to Joppa along the Forth and south into the Pentland Hills but when you're talking about the original, medieval Edinburgh, the Old Town is it. It’s not possible to say when the first fortification was built on Castle Rock – there are hints of human occupation going back to the late Bronze Age – but it’s widely accepted that there was some sort of castle by the late 11th century at the highest, rocky and westernmost point of a volcanic whaleback hill that slopes down to the east. Into the 12th century Holyrood Abbey was built at the foot of that hill creating the spine around which medieval Edinburgh grew – now known as the Royal Mile – with various streets and closes (small alleys) leading off north and south. Given the Old Town’s antiquity, it is here you find most of the older visitor attractions, the bulk of the tourists and a consequent concentration of shops, bars, cafés, restaurants and nightlife.

It’s not a big area however. From Edinburgh Castle to the Palace of Holyroodhouse, next door to the surviving ruins of Holyrood Abbey, is actually around a mile (1.6km) although it then opens out to the wide spaces of Holyrood Park. You can walk anywhere in the Old Town and be following in the footsteps of kings and queens, invading armies, religious radicals, dissenters, murderers, the condemned or the celebrated. An order of knights established by James II & VII still meets at the High Kirk of St Giles within a few minutes’ walk of nightclubs that will keep you dancing to dubstep until 3am. Dimensionality is probably the best word for the Old Town, in its spaces, its history and its multifaceted appeal. Along with the New Town it has been an official, UNESCO World Heritage Site since 1995.

Things to do in the Old Town 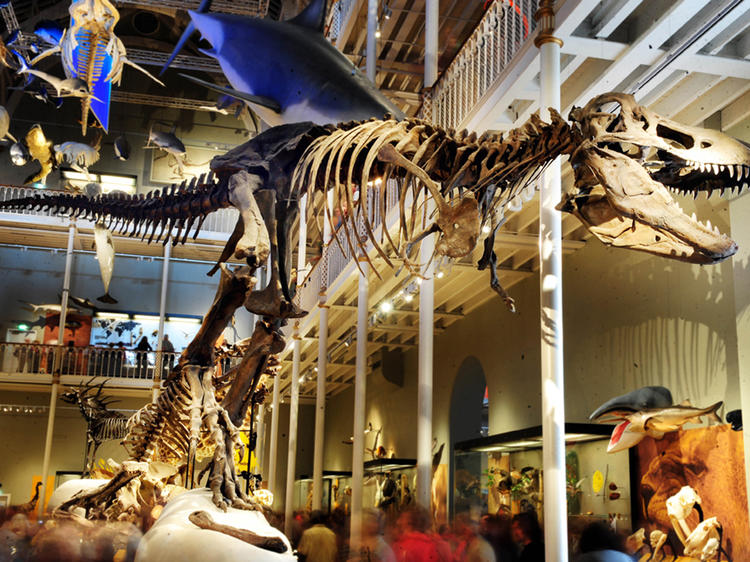 From the geology to the industry, from ancient people to the 20th century, from the basement to the fabulous roof terrace the National Museum of Scotland tells you the story of the country while some of the artefacts on show can take your breath away. The new part of the museum dates to 1998; the older part adjacent was completed in 1888 but was substantially refurbished and reopened as from 2011. Together they're a must-see. 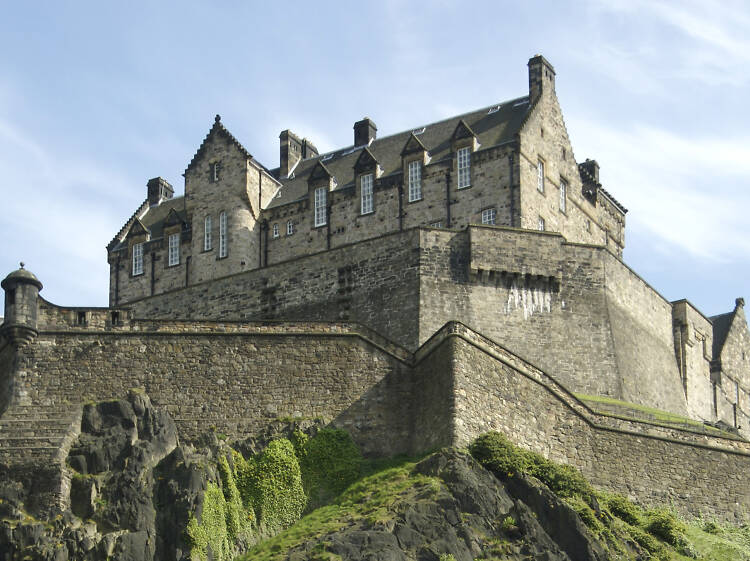 With nearly a millennium of recorded history under its belt, a span of human occupation that probably stretches as far as the Bronze Age, a beautifully simple 12th century chapel, the hugely affecting Scottish National War Memorial, the National War Museum, the Honours of Scotland and much more besides, Edinburgh Castle is a world-class attraction. If you can't find something here to engage your interest, you probably need professional help. 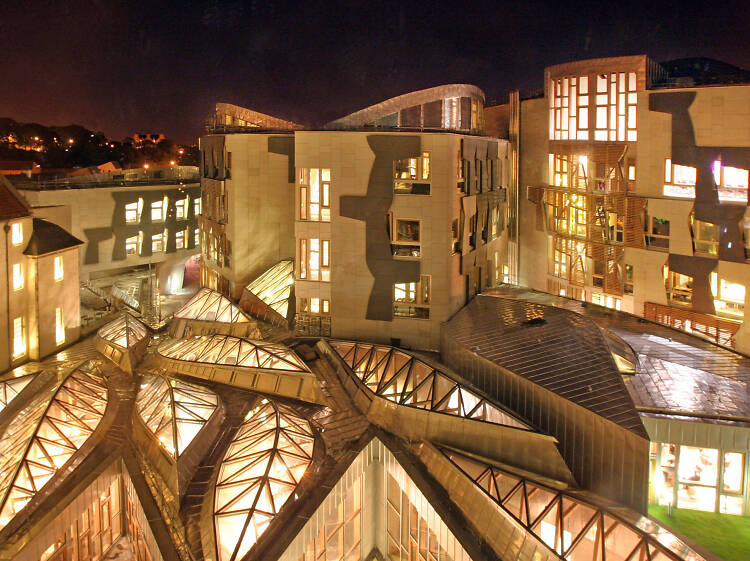 It's a talking shop for politicians so why bother visiting? The bold design by the late Enric Miralles was controversial, construction went way over time and budget, the interior of the building is remarkable and in September 2014 nearly 45% of Scots felt that this parliament was perfectly sufficient for Scotland's needs, Westminster being surplus to requirements. If the UK breaks up in your lifetime, this place will have played a key part.

With medieval roots, much subsequent refurbishment and a prominent role in some key events of Scottish history, St Giles is a rewarding place to wander. Given the window it affords on the Calvinist superstructure of Scotland's soul – if such a confection can be said to exist – then visiting the Mother Church of Presbyterianism is positively voyeuristic. 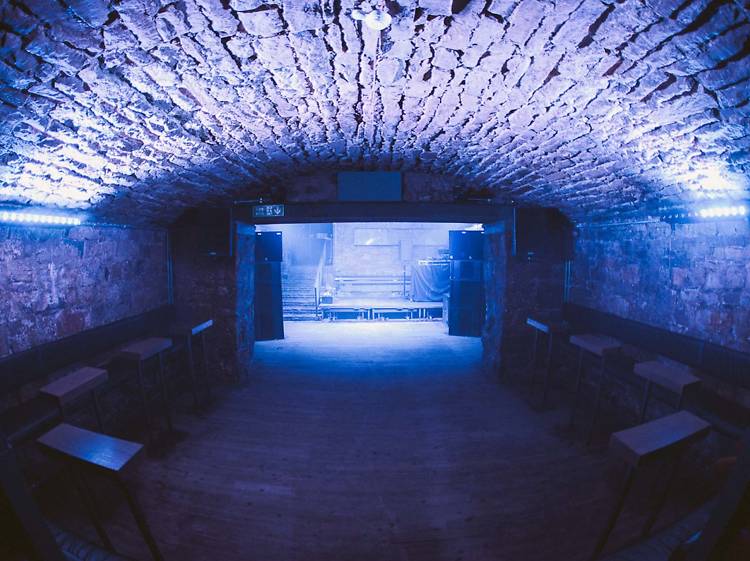 With its medieval city-on-a-hill status, the Old Town has lots of layers, basements, cellars and bridge arches that have been built over and hidden. Cabaret Voltaire takes advantage of this aspect of the city's fabric to provide an atmospheric club and gig venue that feels both culturally and literally underground. Here you might be watching a solo act with an acoustic guitar, or dancing to hip hop until 3am. 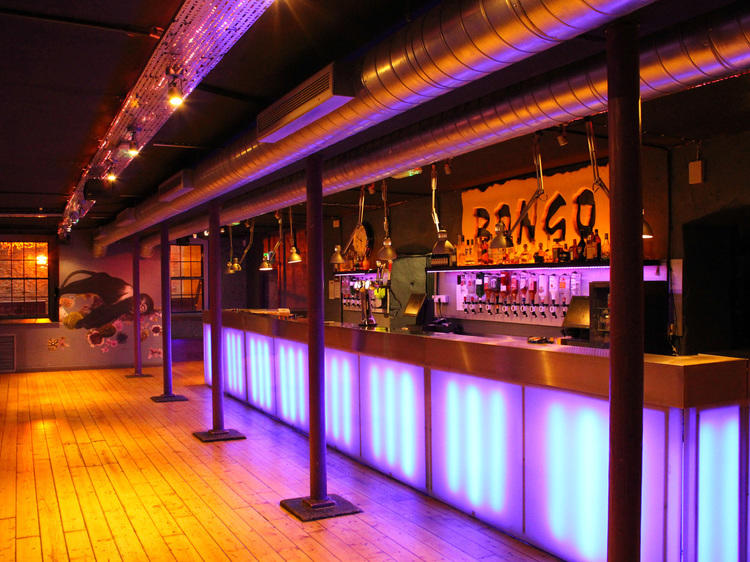 Owned by an arts charity Out of the Blue, the Bongo serves as a gig venue, club venue and general arts centre. You can find anything and everything on the premises from a pop-up food and crafts market on a Saturday afternoon to a dubstep, grime, jungle and reggae night later on that continues until early Sunday morning. The Bongo is a well-established fixture on the Edinburgh alternative culture scene, based at its current Cowgate premises since 2013.

Cafés and restaurants in the Old Town 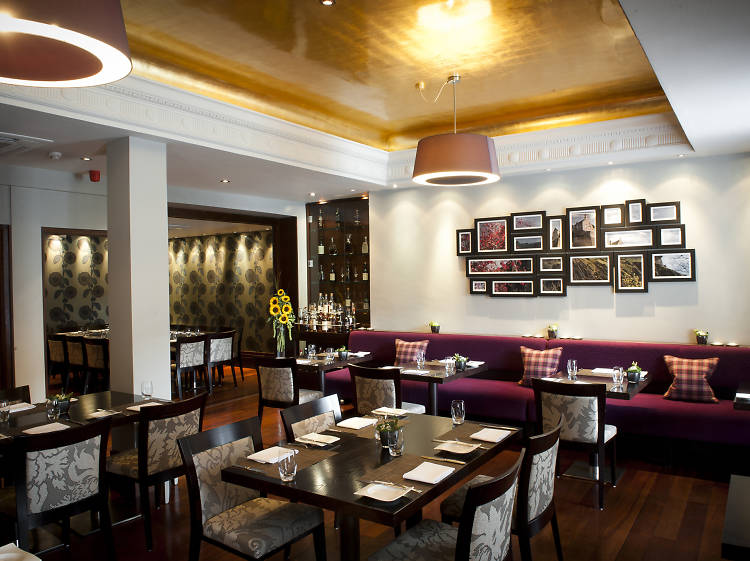 The head chef here is Dominic Jack who started his career at Gleneagles before working in a number of distinguished kitchens in England, France and Turkey. He then came home to Scotland and worked at the Kitchin in Leith for a couple of years before opening Castle Terrace in 2010. It had a Michelin star by 2011. The décor is modern and tasteful but the main attraction is clearly the food; a typical main course might be saddle of roe deer from the Scottish Borders with celery, celeriac, apple and caramelised walnuts. 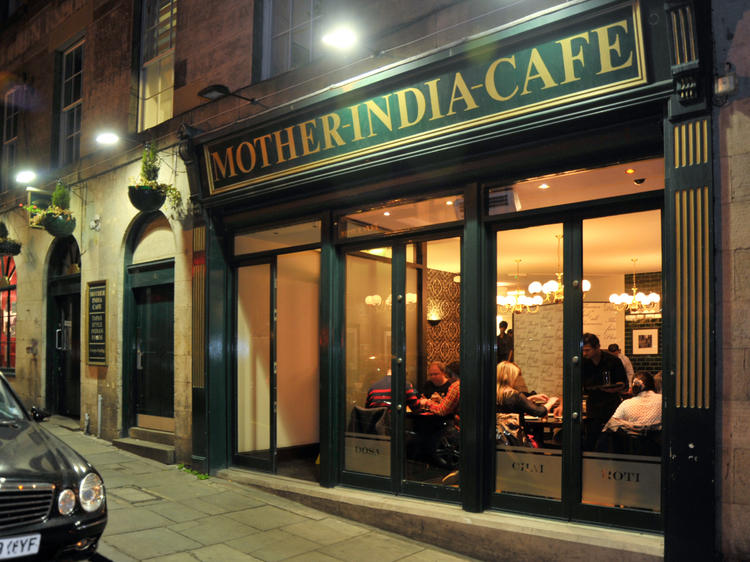 The unique selling point at this Indian venue near the University of Edinburgh is small dishes, various flavours and sharing. Why should a couple struggle through two rich, protein-heavy curries for example – and rice and bread – when they could have three or four smaller dishes, sample them all, then just order more if they feel like it? Simple, clever, popular. 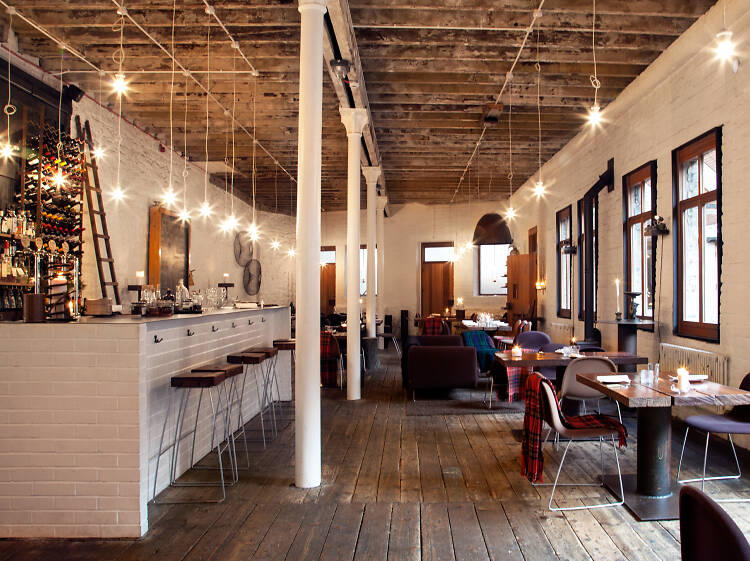 Andrew Radford is an Edinburgh restaurant legend; when he opened the Atrium more than 20 years ago it set a new benchmark for contemporary fine dining in the capital. That venue ran its course but, after some intermediary ventures, he popped up again with Timberyard in 2012. Based at an actual old timber yard, the décor is artfully distressed while the food is plain wonderful. A typical main here would be venison with elderberry, velvet bolete, cabbage, celeriac and salsify.

A new and enthusiastic venture with a fairly understated entrance on the High Street, Wildest Drams opened in 2014 and specialises in game although it's no slouch when it comes to craft beer and whisky in its cellar bar either. Unfussy décor allows diners to focus on a menu including duck, partridge, pigeon and venison, although vegetarians will not go away empty-bellied.

Bars and pubs in the Old Town

If a bar has a genuine commitment to top-quality beer and fine single malt whisky, a decent range of both and staff with the ability to explain the products to the clientele then that bar has given itself every chance to thrive. The Bow Bar thrives. It should probably be used as an example in business studies courses: how to do things properly. 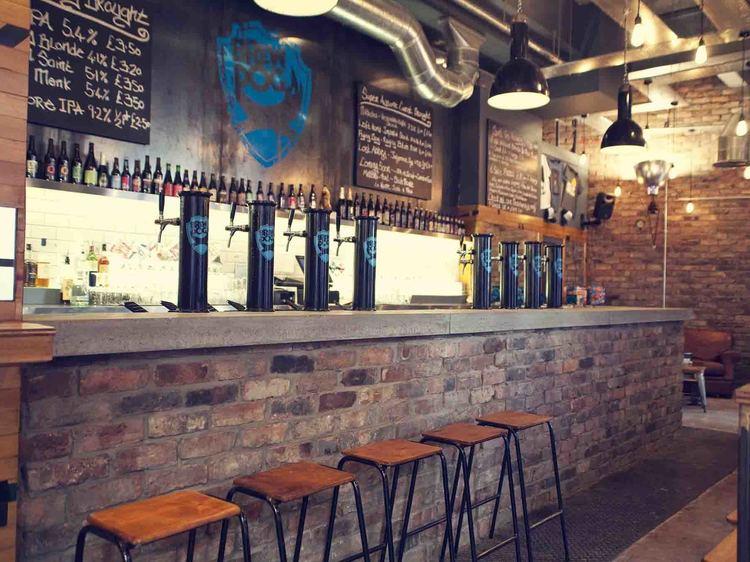 Despite the irreverence, the publicity stunts, the disdain for the deeply conservative UK brewing industry and the artful, punk attitude, it's important to remember that Brewdog makes very good beer. Its Dead Pony pale ale is pretty damn fabulous for example while its high ABV brews can be complex, interesting drinks – in modest quantities. You can sample them all – and other beers – at its contemporary Cowgate pub in the Old Town. 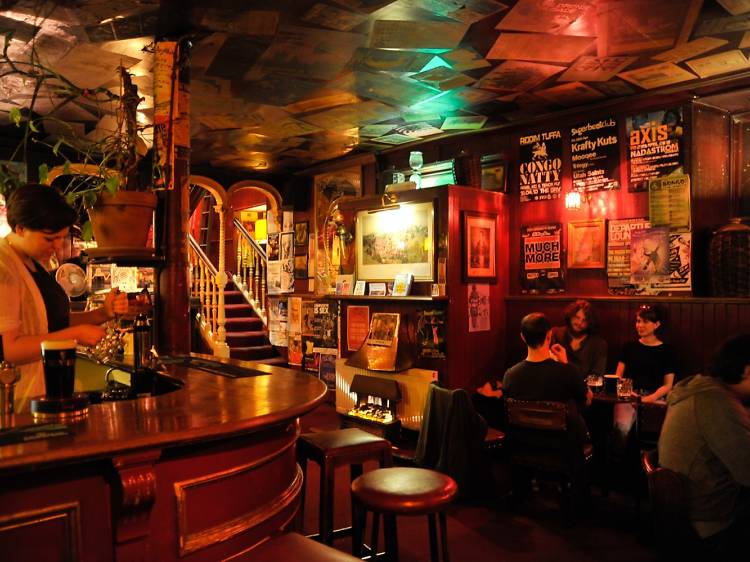 Not so much a pub as a manifestation from another universe that drifts in from time to time and opens its door at random. Young people come in, carry items up the stairs, then never come down again. The barmaid is ethereal. There is hardly any choice of beer. Crisps are sometimes free. This is the type of pub you visit once then dream about years later, wondering if it ever existed at all. If you drop by for a pint, it will probably be closed. 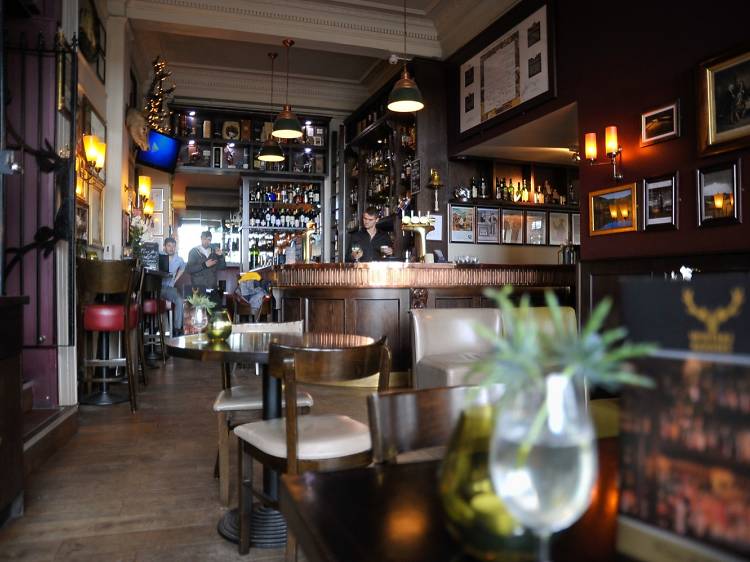 Slap bang in the middle of tourist country, Whiski is a traditionally-styled bar, popular with visitors to Edinburgh who fancy a steak and ale pie and a pint of Scottish beer. It offers more than that however as its whisky list is one of the city's very best, easily good enough to interest serious aficionados. There is a sister venue on North Bank Street, the Whiski Rooms, with a shop, tasting room, bar and more formal restaurant. This High Street venue is certainly the more relaxed and pub-like of the two.