The 19 best hotels in Edinburgh

Don’t know where to stay? These are the best hotels in Edinburgh, from dainty boutiques to opulent five-star pads

If you’re after a quaint, picture-postcard foil to gritty, cosmopolitan Glasgow, you’re in the right place. This edifying city may be less cool, but it’s no less fun – especially when the centre is transformed during August’s Fringe season.

Because visitor footfall is so immense at peak times, it can be hard choosing where to stay, and options may be limited, of course. So to help out, here’s our pick of the absolute best hotels in Edinburgh.

Many live up to the Scottish capital’s history and innate sense of drama. There are some in historic buildings, with suites stuffed with antiques, rooms designed to the hilt and views to swoon over; others have spas attached; others have Michelin-starred restaurants and bars. Heck, Prestonfield House even has its own parkland. We say treat yourself – but do get out and explore the city while you’re here. 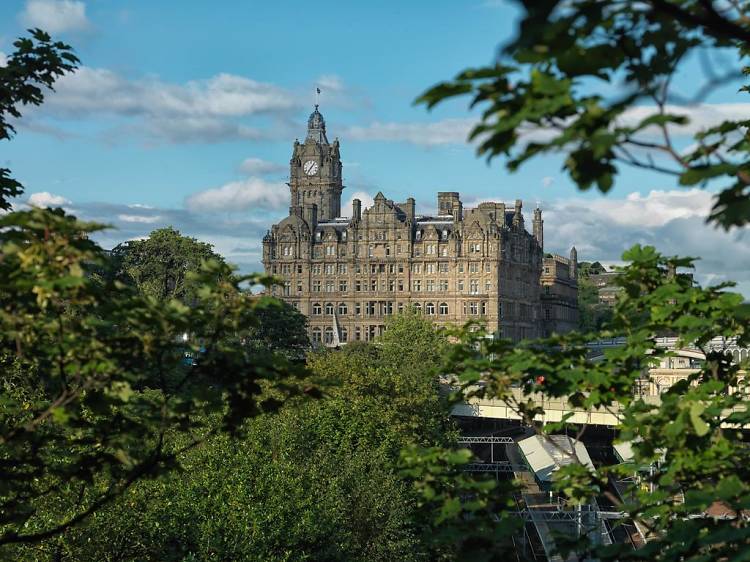 Part of the Rocco Forte chain, there’s much for the Balmoral to boast about. It has its own Michelin-starred restaurant, Number One; a chic spa centre and a clocktower that makes for an iconic Edinburgh sight. Olga Polizza’s classic, elegantly designed rooms all have free wi-fi, as you’d probably expect. But grander suites also have their own concierge services, as well as fancy touches like flowers and fireplaces. The in-house Palm Court offers an excellent afternoon tea, and there’s also a brasserie and not one but two bars – one of which specialises in whisky. 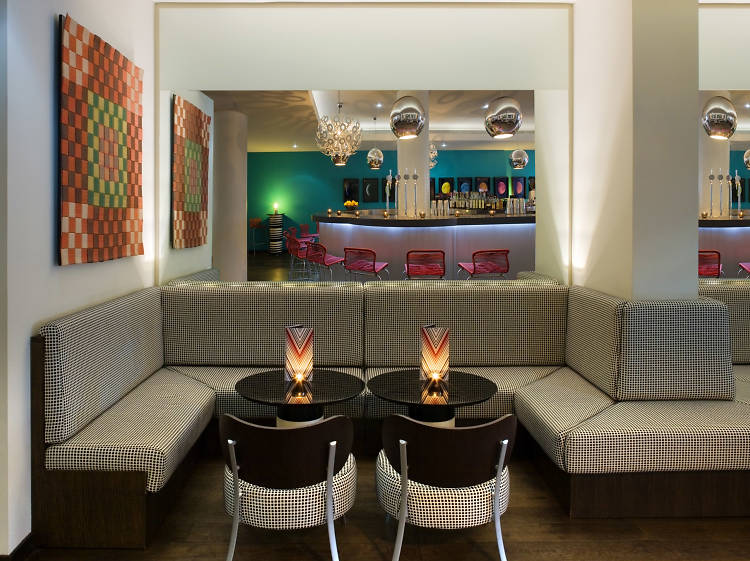 The Royal Mile is a relatively young five-star Edinburgh hotel, built in 2009. Replete with bright colours and bold fabrics, it’s right in the centre of the city. Its 136 rooms all have free wi-fi, newspapers, Nespresso machines and bathrooms with rain showers. A particularly nice touch is that each suite has been decorated by a different Scottish artist and designer. The restaurant, Cucina, serves Italian dishes; there’s also a bar called Epicurean and treatment rooms that offer facials, manicures and massages. 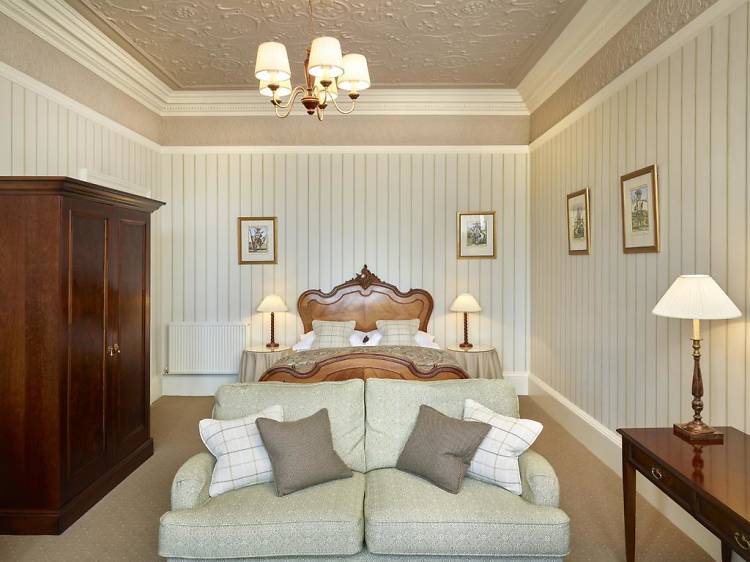 The Residence offers a range of five-star suites, each with its own character, but all with antiques and a range of hotel services attached. You’ll get 24-hour room service here, as well as a microwave and crockery in each suite; in the drawing room, afternoon tea and drinks are available. In some suites there are spa baths, while others have views over Edinburgh Castle. All have free wi-fi. And although his hotel is located in the New Town, there’s free parking available. 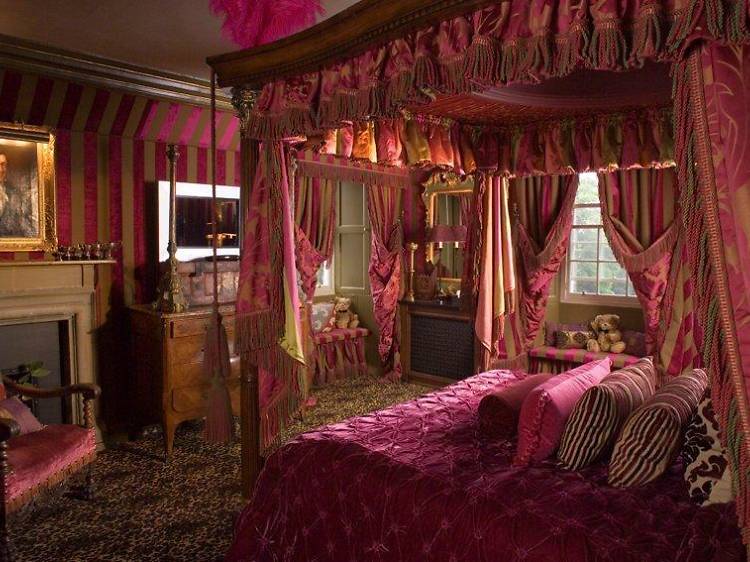 This place is to be found in parkland just south of Arthur’s Seat, in a building whose origins date back to the 17th century. The communal spaces and bedrooms alike have ornate fixtures and fittings, and antique items are dotted about everywhere. Fortunately, various contemporary comforts are to be found too, like mood lighting, 47-inch TVs, minibars, and free wi-fi. Rhubarb Restaurant offers Scottish cuisine and afternoon tea. Peacocks and Highland cattle roam the grounds – but regardless of all this bucolic charm, the city centre is just a couple of miles away. 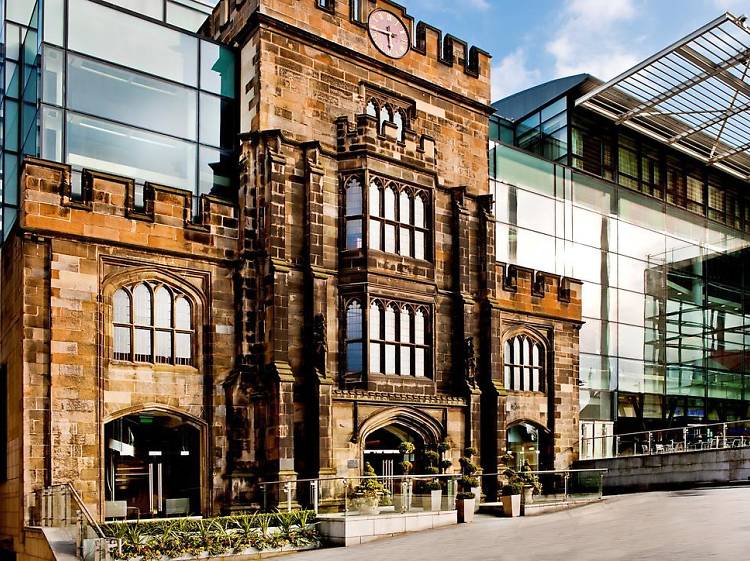 The Glasshouse is a modern five-star hotel that sits behind the 19th-century façade of Lady Glenorchy Church. The interior has a clean, contemporary design; its 77 rooms have floor-to-ceiling windows with views across Edinburgh, along with Nespresso machines and newspapers. The most desirable rooms either give access to the two-acre roof garden (which has views of Calton Hill), or have balconies. Win-win, then. The on-site brasserie serves Scottish cuisine. 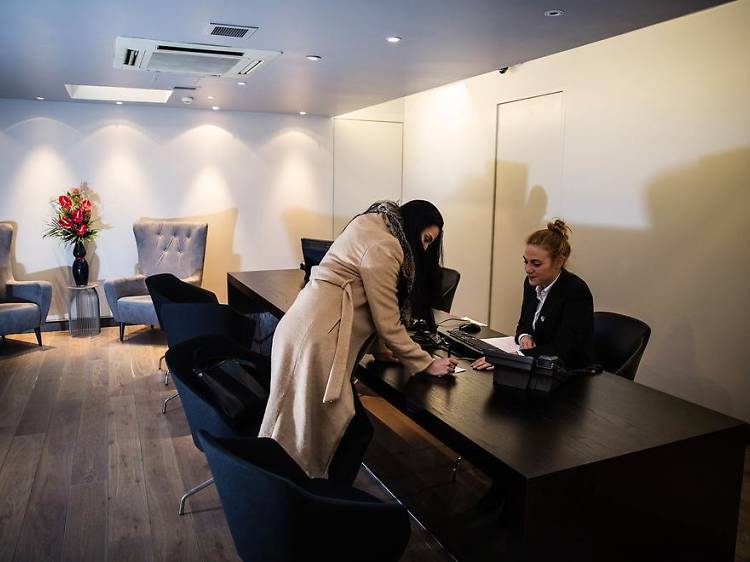 This branch of Malmaison in a former seamens’ mission is where it actually all began for the boutique chain. It’s an auspicious building, located at the meeting point between the city’s docks and the Water of Leith – we suggest you ask for a harbour view when you book. Inside, you’ll find a bar, brasserie, gym and 100 jauntily decorated rooms (all with kettles, desks and mini-bars). Parking and wi-fi are both free. 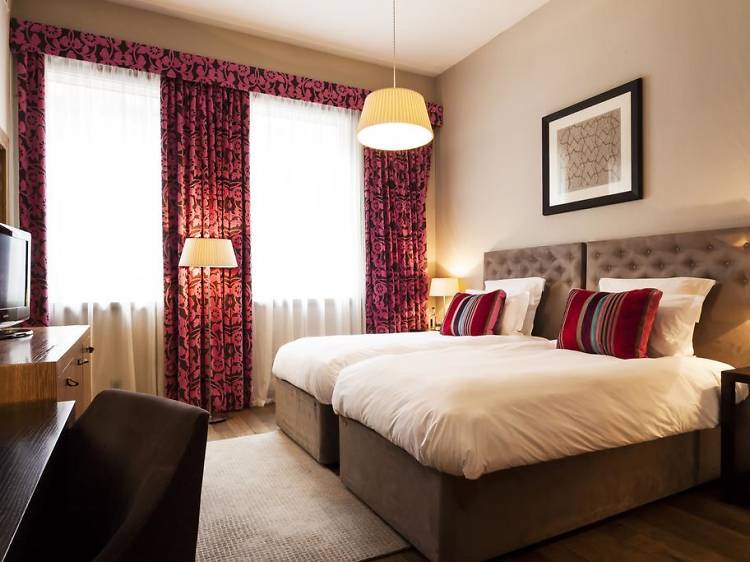 New Town’s Tigerlily is the very epitome of the design hotel, with an opulent bar, restaurant and 33 incredibly handsome bedrooms. They’re all kitted out to four-star standard, and come with free wi-fi. The Black room has a fireplace and a wicker chair suspended from the ceiling (because, why not?), while the Georgian suite has a contemporary four-poster. Lulu nightclub can be found in the basement. 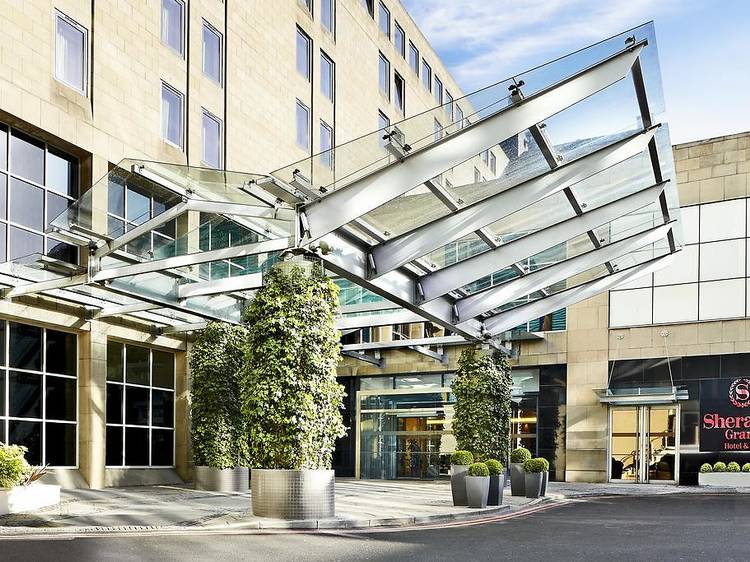 A slick and modern hotel that boasts a particularly upscale spa, the Sheraton is located just south of the city, with Princes Street a five-minute walk away. The spacious, airy rooms here have wooden floors, contemporary décor and free w-fi. If you’re lucky, you might get one with views of Edinburgh Castle. There’s both an on-site restaurant and bar, but the real jewel is that spa, which has a pool, a hydropool, a thermal suite, a gym and several treatment rooms. 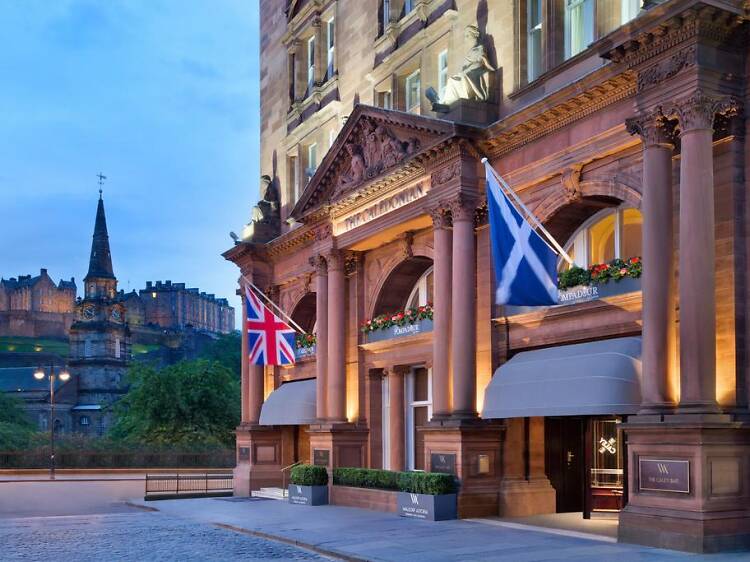 The Waldorf Astoria was first a railway hotel at the now-extinct Caledonian station. Then, after an ambitious refurb in 2012, it emerged a very different kind of establishment. Its Edward heritage remains on display, though: the luxury here is a reserved, tasteful one. Rooms come with Nespresso machines and Salvatore Ferragamo toiletries. Wi-fi is... you guessed it, free. For fine dining, head to the in-house Pompadour restaurant, and try Grazing by Mark greenaway for something more casual. There’s also a bar and a spa with a swimming pool. 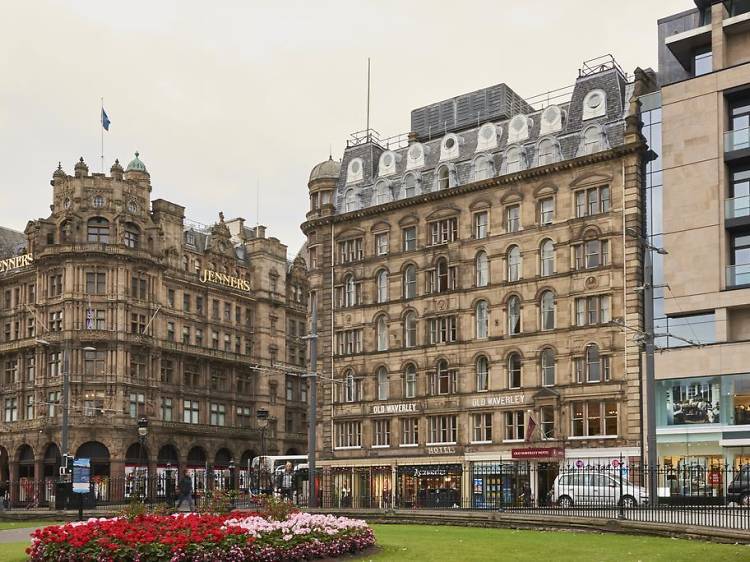 In an optimal central spot – with some suites looking across the Old Town skyline, Princes Street Gardens, the Scott Monument and the Castle – the Waverley also, unsurprisingly, has Waverley Station all but on its doorstep. Given the general price of Edinburgh hotels, it’s not even expensive and has great low-season bargains. That said, it’s more functional and old-fashioned than stylish. 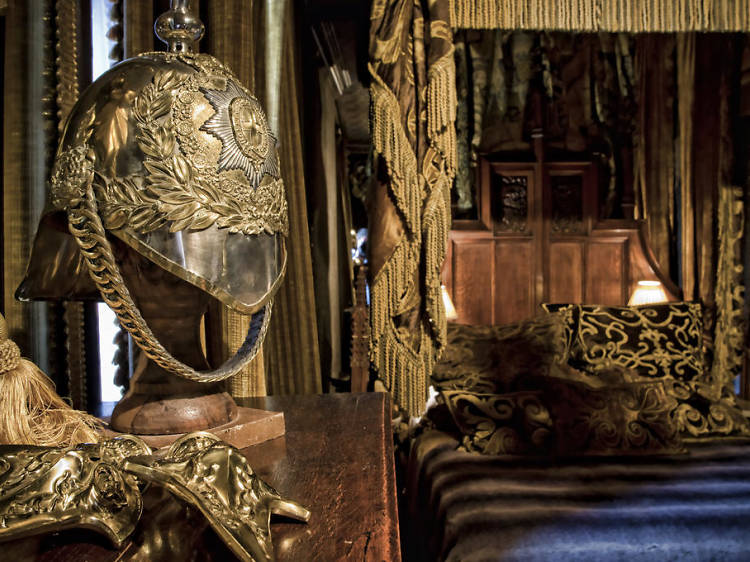 11. The Witchery by the Castle

At the top of the Old Town’s Royal Mile, you’ll find two buildings that contain nine sumptuous goth suites. Each of The Witchery’s rooms is extravagantly furnished with antiques, leather and velvet, as well as tapestries and four-posters that nicely complement the atmosphere at the associated Witchery restaurant on the same premises. Champers, newspapers and wi-fi are included in the room rate. 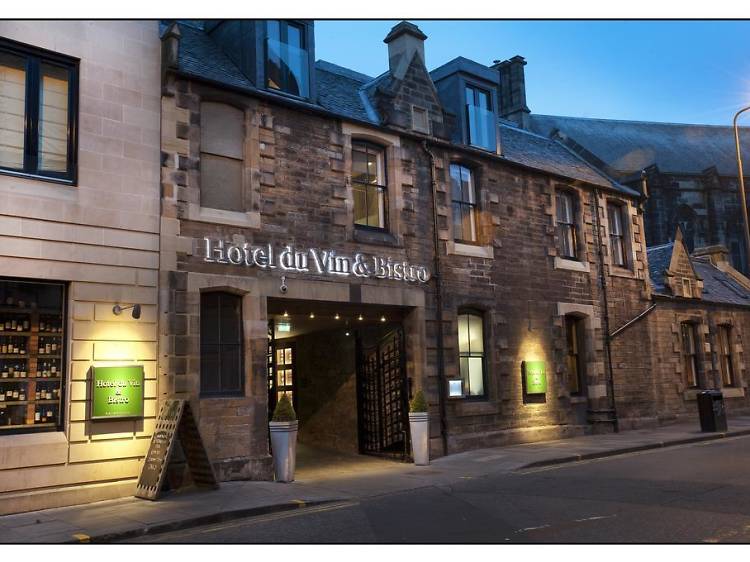 Know the Hotel du Vin chain? Then you’ll know exactly what to expect here: dependable comfort and style with a look pitched somewhere between a Scottish gentlemen’s club and a contemporary hotel. There’s a French bistro of sorts, a bar and a small courtyard. It all comes together in a winning formula, cleverly integrated in an old building that could hardly be closer to the National Museum of Scotland, Greyfriars Kirkyard and various Fringe goings-on in August. 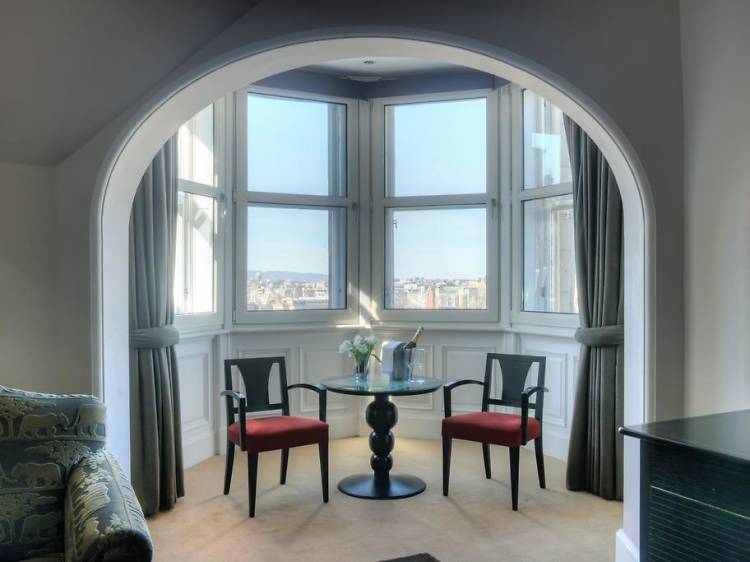 The former headquarters of the ‘Scotsman’ newspaper, this building has been enjoying life as a luxury hotel since 2001. Some of the rooms and suites have astonishing views, while the décor and general feel befits, well, what it is: a boutique hotel in an Edwardian-era newspaper building with baronial characteristics. It has charm and a top location. North Bridge Brasserie is the main dining option, while the hotel also offers a gym, spa and a curiously futuristic swimming pool. 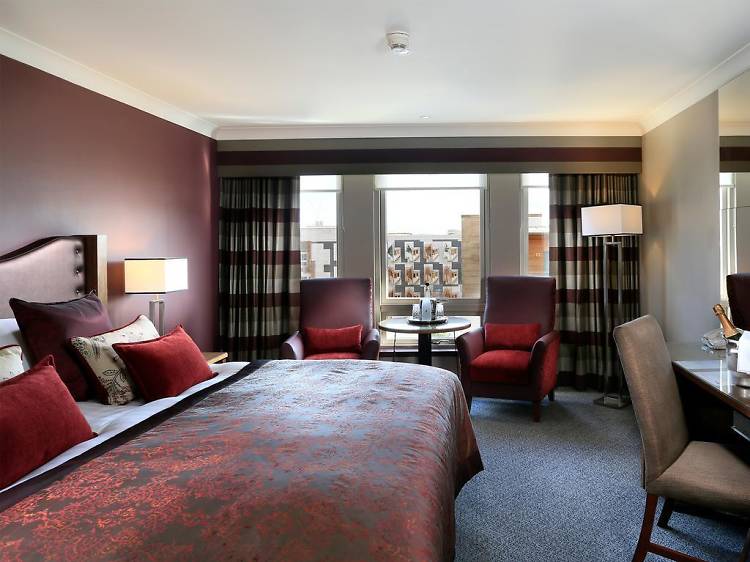 One of 45 properties the Macdonald chain lays claim to across the UK, this Holyrood Road spot is handy if you want to visit the various sights dotted throughout the Old Town. It’s in what’s admittedly a rather prosaic modern building, with an expansive, corporate feel – but that does mean weddings and conferences are handled well here. Rocca, the restaurant, is a nice dining spot, and there’s a spa, too. 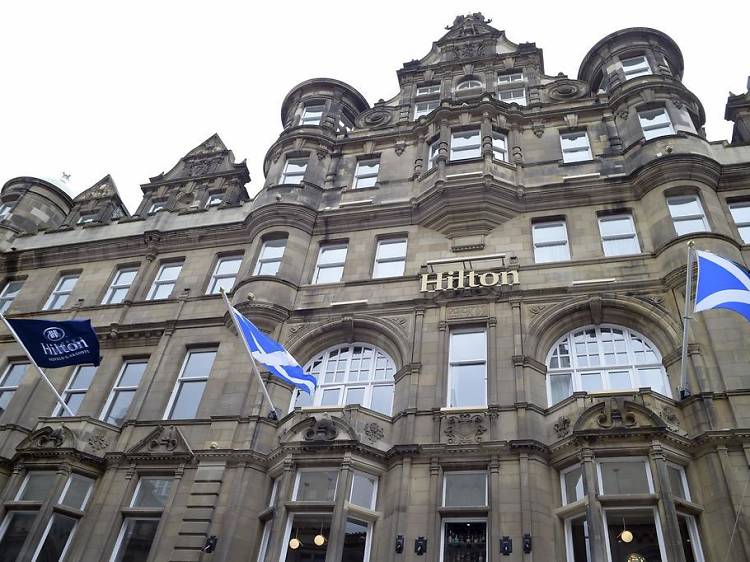 The Carlton is a hefty hotel on North Bridge – actually a road in the city centre – with some rooms that have truly fantastic views (ask for one that looks towards Holyrood Park). Décor is functional, if a little corporate; facilities include a fitness suite and pool. Best to go out for lunch and dinner, though: there’s no shortage of choice in the surrounding streets. 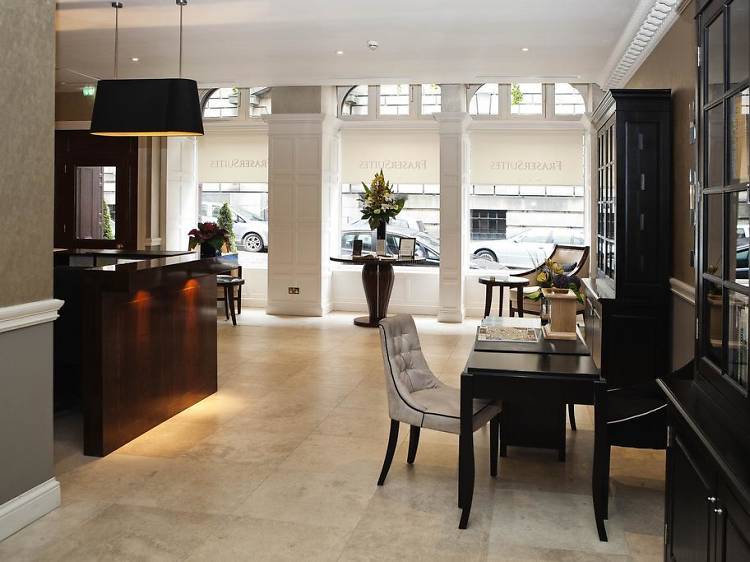 This international chain has establishments far and wide, from Bahrain to Wuki in China. This Edinburgh outpost, just off the Royal Mile, opened back in 2009. You might call it a hotel lite: its boutique-style rooms and suites all have some form of self-catering facilities. Choices range from a basic room with microwave and fridge, to a suite with a full kitchen and striking views from its balcony. 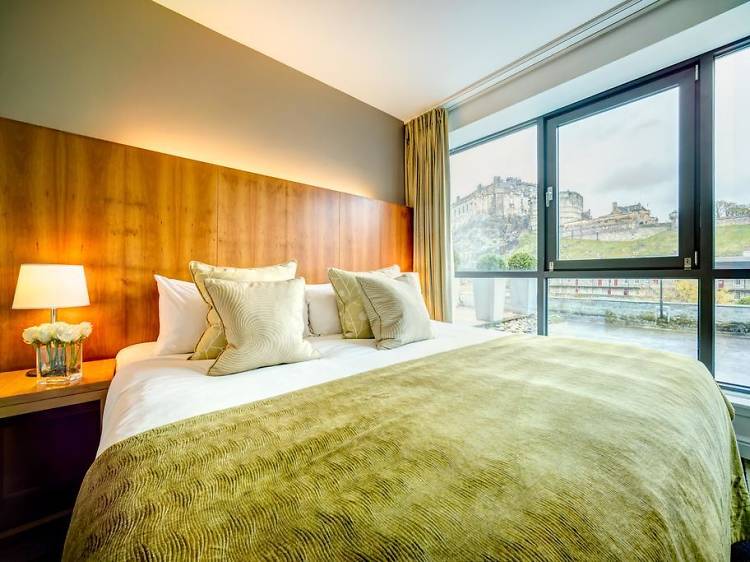 Apex is a small chain that started out with this large hotel in the Grassmarket nearly 20 years ago. What the establishment might lack in character it makes up for with modern décor and castle views from the better rooms. 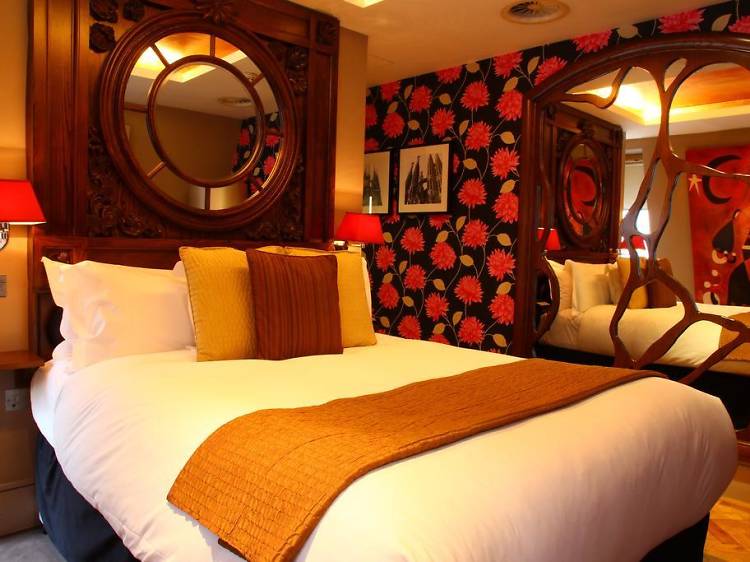 A themed designer hotel that arrived not long before the financial crisis, Le Monde has only 18 rooms and junior suites, but all have individual character and all reflect the city that gives them their name. The New York, for example, smacks of chic, Manhattan loft living; the Atlantis (not a real city, fact fans) has a large piece of arty aquamarine glass on one wall for that subsea feel. It boasts a central location by the George Street shops; lots of fun if you’re up for it. 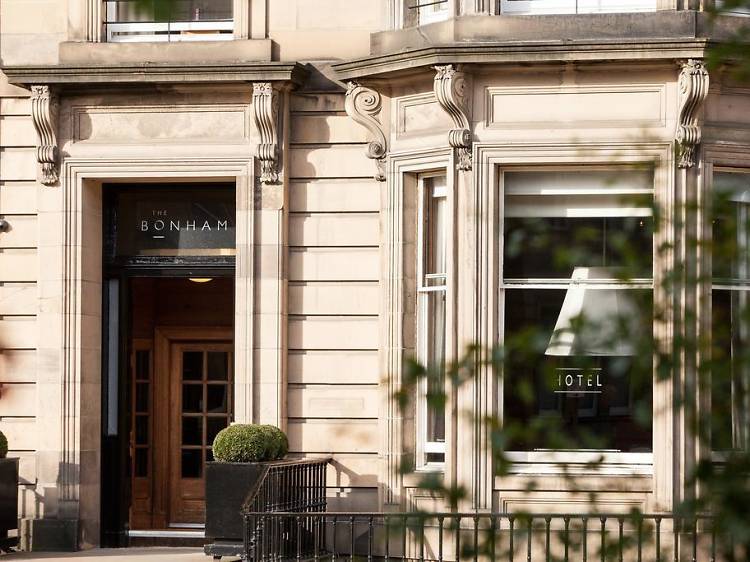 Originally three Victorian townhouses that fulfilled various roles over the years, these premises were reborn as a boutique hotel in 1998 and the Bonham has quietly gone about its business, charming guests ever since. Furniture is stylish, bedrooms are attractive, some have excellent views, and the hotel’s just 10 minutes’ walk from the west end of Princes Street.

And here’s where you should eat... 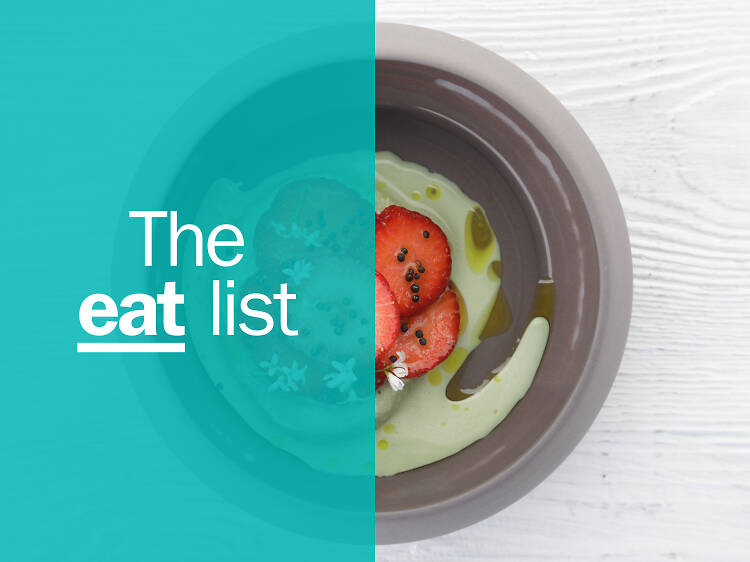 The 21 best restaurants in Edinburgh

From the Old Town’s humble cheap eats to the hard-to-bag-a-seat spots around Leith Harbour, Edinburgh does dining both accessible and highfalutin. And more often than not, the results are exceptional. But best of all? You’ll never be stuck for choice. Talked-about openings are popping up at a remarkable rate these days.