There are many, many reasons why Florence Pugh (Midsommar, Lady Macbeth) is overjoyed that her Marvel Cinematic Universe (MCU) debut Black Widow is finally hitting cinema screens worldwide (as well as popping up on streaming platform Disney+). But one of the biggest reliefs is that she won’t have to bite her lip for much longer. Keeping all her spy/assassin character Yelena Belova’s secrets and dodging spoilers during the inexorably extended delay (the movie was meant to debut in March 2020) has been killing her.

“I’m so glad it’s finally coming out, not just so people can see it, but also so I can prevent myself from getting myself fired,” she says, laughing uproariously. “Like, it’s terrifying being a part of these movies, because they give you so much responsibility, and they don’t check if you’re really good at lying or holding secrets. You have to come up with all these ways of dodging questions. It’s the hardest part of this job.”

Her relief at finally being allowed to open that door a crack, as a naturally “chatty person”, is palpable. As is her enthusiasm for the gig, standing alongside Scarlett Johansson in one of the first big blockbusters to drop since you know what. There’s a bundle of emotion wrapped up in that, particularly as Black Widow is both Scarlett’s first solo movie after a decade in the role, and also her swansong.

We’re going to assume that literally everyone in the world who cares about the MCU has seen Avengers: Endgame by now, but just in case you haven’t, fair warning: there be mild spoilers ahead.

Yelena’s social cues aren’t great, but it means that Natasha can’t run away from it. It’s something that Yelena won’t let anyone excuse themselves from anymore. I think it takes a very brave person to ride on the pain

Natasha Romanoff sacrificed her life in the last stand against the villainous Thanos. This film is a flashback that’s set in the immediate wake of Captain America: Civil War. The Avengers have angrily disassembled, divided over whether their secret identities should be micromanaged by the American government. Natasha’s on the run, alone. But an old photograph draws her back to a former safehouse in Budapest, and the less than welcoming arms of Pugh’s Yelena Belova. As kids, they were placed in a fake family in Ohio, overseen by Rachel Weisz’s Melina Vostokoff and David Harbour’s Alexei Shostakov aka Red Guardian, agents of shady Russian brainwashing outfit the Red Room acting as mom and dad.

“Something that I found really enjoyable to play about Yelena is that, despite her being amazing at her job, she’s also incredibly emotional,” Pugh says of getting to play competitive sisters with a lot going on alongside Johansson. “Yelena’s social cues aren’t great, but it means that Natasha can’t run away from it. As Scarlett said the other day, ‘it’s like Yelena is dragging Natasha, kicking in her heels, not wanting to listen and look back at her past’. And it’s something that Yelena won’t let anyone excuse themselves from anymore. I think it takes a very brave person to ride on the pain.”

A rising star on the Indie scene, Pugh diligently chooses her next movie based on loving the screenplay. “I always tell my team, if you know I’m going to love it, be careful, because I’m going to end up doing it.”

That’s not how clandestine Marvel movie casting works. But Australian director Cate Shortland – a fellow indie star who helmed Somersault and Berlin Syndrome – was able to talk her round. It helped that Pugh had wanted to work with Shortland for ages. “She was like, ‘Look, all I can tell you, Florence, is that it’s EPIC.” And I was like, ‘Great. Fantastic’. So I’m excited that this epic film is finally going to be out there.”

Also surprising was the level of creative freedom Shortland allowed her cast. “Despite the size of the film and it coming from such a big movie-making machine, she was so open and ready to have every single one of our opinions, our thoughts and cares for our characters. I did not think that I was going to have as much free rein as I did.”

Pugh hopes comic book fans will embrace her refreshingly kooky take on the much-loved character. “I was really invested in the oddities of Yelena. I wanted her to be different. To dress strange and say weird things. Cate encouraged me to be even stranger. I really appreciated her taking away the whole glitz and glam and allowing me to do what I do.”

Black Widow has the sweeping spy thriller scale of MCU fave Captain America: The Winter Soldier, but also the huge found family heart of Guardians of the Galaxy. Yelena’s gloriously nagging sideswipes are a big part of that vibe. “I think siblings are like that,” she says. “They go from being best mates to arch enemies in a hot second. And that’s what makes you love each other. In my family, we all know how to wind each other up. How to say the right things to make each other happy and then the best things to make them really pissed off at you. That’s what being a part of a family is.”

It helped that she and Johansson bonded from the off. “I watched it again last week for the first time in like a year and there were so many moments that made me smile, because I could see me and her in a moment, giggling or smirking at each other.”

When we speak, Pugh’s looking forward to a special screening with her family and friends. “Just having their shriek reaction of ‘Oh, my god, we get to dress up and go out to the cinema again,’ has been wonderful, to know that we have something to look forward to.”

For all the film’s gorgeously goofy moments, it also deftly deals with trauma, morally murky conundrums, and a triumphant pushback against gruesome misogyny. For all those reasons, Pugh’s pumped folks can choose to see it play out on the big screen. “I’m grateful that Marvel and Disney didn’t release it online [last year] for that exact reason. I think this film is so powerful. It says a lot. And you know, Scarlett deserves this moment, as does Natasha Romanoff. And I’m happy to be joining the ride.”

Black Widow is in UK cinemas July 7, on Australian screens July 8 and US theaters Jul 9 (lockdown allowing) and lands on Disney+ With Premier Access globally on July 9.

We rank all MCU movies from worst to best 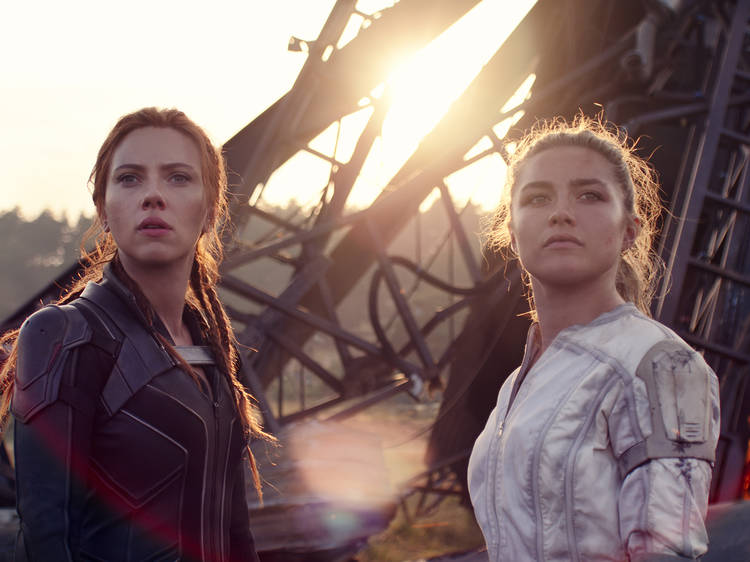