“You look familiar; have we met before?”

That’s Justin Theroux introducing himself to me at the Smile in Noho. “This feels like the New York that I remember,” he adds, sipping his espresso and scoping the quaint café after I tell him that no, sadly, we haven’t. The Washington, D.C.–born actor, 45, knows a thing or two about life here. He cut his chops downtown in the ’90s before moving out West and nabbing buzzed-about roles in film (Mulholland Drive) and television (Six Feet Under), writing big-budget scripts (Iron Man 2) and landing the reason for our luncheon: the starring role in HBO cult fave The Leftovers, a dark passion project that puts his steely gaze and dramatic savvy to good use.

The TV show, based on the novel by Tom Perrotta (Little Children) and co-created by Lost’s Damon Lindelof, chronicles the repercussions of the Departure, when 2 percent of the world’s population inexplicably disappears. Theroux plays police officer Kevin Garvey, an everydude desperately trying to keep his family together while the world around him grows increasingly strange. “There’s a bit of pressure on us to spike the landing, but I think we’ve done that,” he says of the upcoming finale. “If you try to please everyone, then you’re just trying to make them a Big Mac,” he continues. “I think this last season is really fine dining when it comes to storytelling. [The ending is] enormously gratifying—for me, at least.”

Theroux acknowledges that the show’s last chapter was shot in Australia and kicks off in the fictional town of Miracle, Texas—the only one untouched by the Departure—where his character has relocated his family. Otherwise, though, the actor is cagey about plot points. Instead, he talks about what he digs—the Lone Star State (“I could easily see myself spending my entire retirement there”) and his back tattoo (“it’s a big rat and a New York City pigeon”) are biggies. And then, occasionally, he touches on what he doesn’t like: “I’m so sick of seeing great little mom-and-pop shops shut down and become fucking ATMs or cell phone stores.” It’s a complaint that, at least to this New Yorker, seems very…familiar.

“I hope to never find a defining role because I feel like that’s death.” 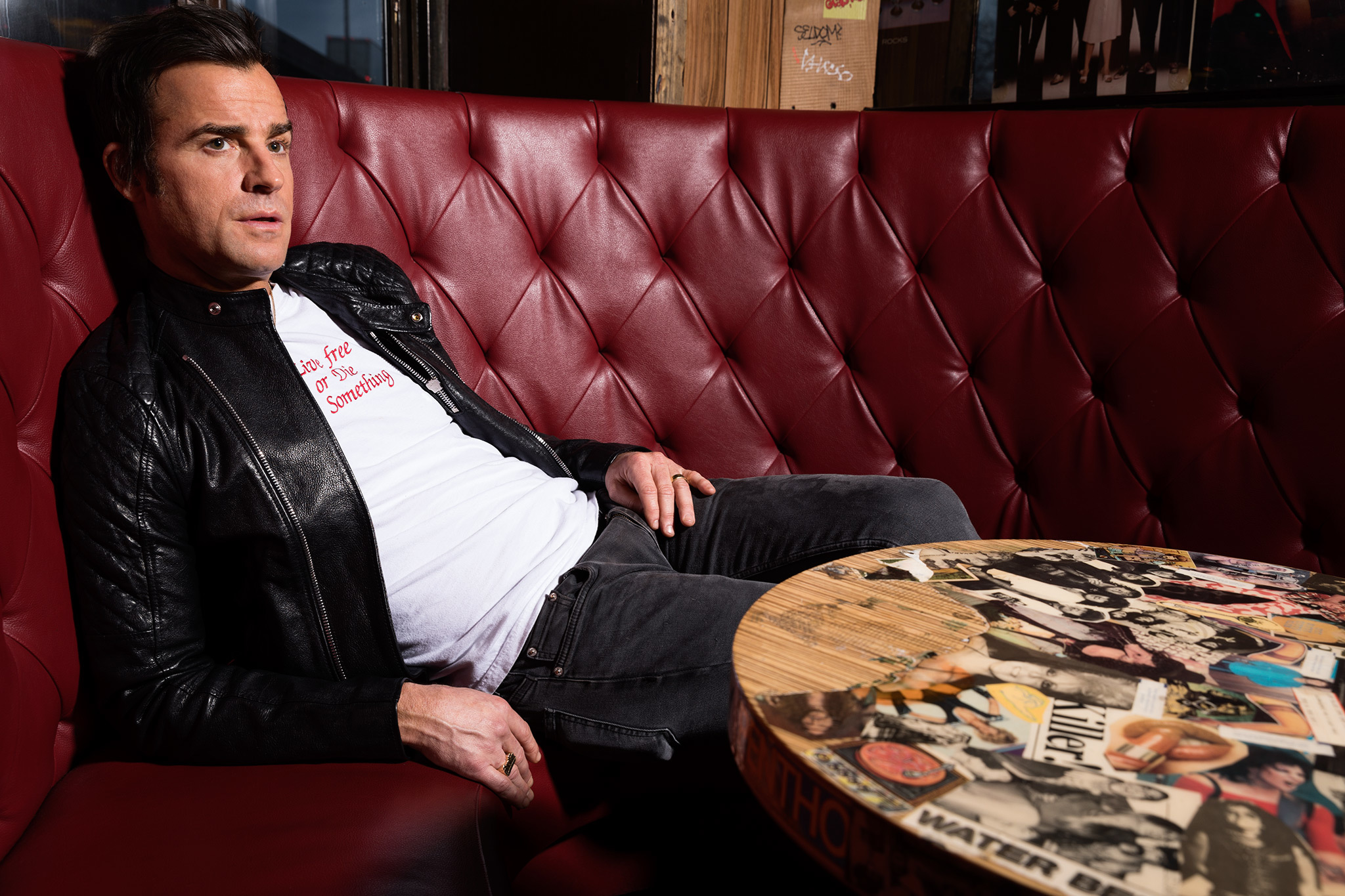 You seem to like this place.
[The Smile is] one of my favorite spots. It’s chill. It’s not like a panic to get in and out.

Does it bring back memories?
That’s the thing; after spending such a great amount of time [in New York], every corner of a place or street starts to populate with memories as the years go on. So I can walk through Tompkins Square Park and be like, Oh, I remember when dah dah dah was here. Oh, I remember when [Rudy] Giuliani took over the squats; or Washington Square Park, I remember when Debbie Harry did a free show there. I remember having a fight with an ex-girlfriend on that street corner.

What was the city like back when you lived here?
I spent a lot of my twenties literally a block from here, living and working at Von on Bleecker Street. The neighborhood is unrecognizable: It was Skid Row, basically. It was a couple of scrappy gas stations and a lot of repair stations and homeless guys who would sell tin to the tin shops. Now what was the Sunoco is a fucking NYU dorm, and there’s a gazillion new buildings that go up every day. I used to park my motorcycle on the second floor of the Bowery Hotel, when it was a gas station with three pit bulls running loose. I don’t like being nostalgic about old New York because I have it; it’s in my brain and I lived it and it was great. I also love the New York that is now.

Do you feel the same way about Los Angeles?
I used to hate L.A., and I had a big chip on my shoulder about that. New York always felt [like] home, no matter where I was in my life, and I think it’s because you’re constantly physically in proximity to every kind of person in the world. It’s not all actors, it’s not all directors and producers: It’s dancers, journalists, painters, poets—and you’re all together. It felt very creatively alive, and I think for any creative art form, you kind of need to be around as much of that as possible. But now L.A. is this place where I feel comfortable being, and I can appreciate the things I couldn’t appreciate earlier.

The Leftovers deals with that a lot, the idea of appreciating what you had and what you have. Are you happy the show’s ending now?
What makes long-running television become frustrating is that you inevitably get the sense that writers are painting themselves into corners that they can’t really get out of. Even before we shot the pilot, Damon was like, “This is not a show that’s going to go five years,” which is one of the reasons why I signed up for it.

You wanted the liberty to bow out.
Yeah. It’s creative death for everybody if you go far too long. You start to resent the story you’re telling, and writers start to resent writing it. The difference between a cable channel and a network is you know networks will keep something on the air [for] as long as it’s got eyeballs [on it], and cable channels have this sort of maybe better instinct of [saying]: “The Sopranos wants to end this year. Let’s end it.”

Tony Soprano became a defining role for James Gandolfini the same way Don Draper became one for Jon Hamm. Do you feel like your part on The Leftovers could become your career’s It role?
I don’t think it is really defining. I think there are characters that are beloved. I don’t think any of our characters are beloved in the same kind of way because they’re not necessarily aspirational characters. They’re not characters that anyone would want to be, or I don’t think so. I mean, look at Mary Tyler Moore, God bless, you know? [Her character, Mary Richards] was aspirational because she’s what a lot of women at the time wanted to be. They wanted to be powerful, working women in their thirties, living their life. So it became a defining role for her.

One of the most talked about scenes on the show involves your character jogging, and people created a ton of memes highlighting your anatomy.
You can’t predict when those kinds of things will happen. I don’t pretend to know what women feel like. I think they have it way worse on a much more consistent basis. I mean, every awards show has whole [segments] dedicated to the sizing up of women. But it wasn’t fun, and I never really knew quite how to react to it.

How do you feel about nudity onscreen in general?
I always go back to the story. Objectification exists and gratuitous nudity or violence exists, but I think [that] if it’s appropriate for the story, then it’s appropriate for the screen. If it happens in life, it can happen on television. I feel the same way when it comes to lines or language or jokes in writing. They’re trying to make a ban on cigarettes in movies, and it’s like, people fucking smoke! It’s like saying “fuck” on television. We’re all grown-up enough to hear it on a network. We don’t have to clutch our pearls if someone says it on live television.

The way people have reacted to the current political situation sort of echoes one of The Leftovers’ themes: humans’ response to mourning.
When something bad happens, humans react in strange ways. We all deal with grief, anger, disappointment, sadness—just in different shades of gray.

What’s interesting in politics now is that people may have their own opinion, but they seem unable to comprehend the other side of the argument.
I could never understand people who, when Obama was in office, thought that it was essentially the apocalypse. And now the shoe is clearly on the other foot. I guess we’re feeling what they were feeling? [But] there has to be some face-to-face contact with the other side; we can’t all have it on fucking Twitter. I have a wonderful stepfather who’s Republican; he’s one of the kindest guys, and we’ve had big disagreements, but it’s always been with respect and love and kindness. And I feel like [America’s] kind of lost that. 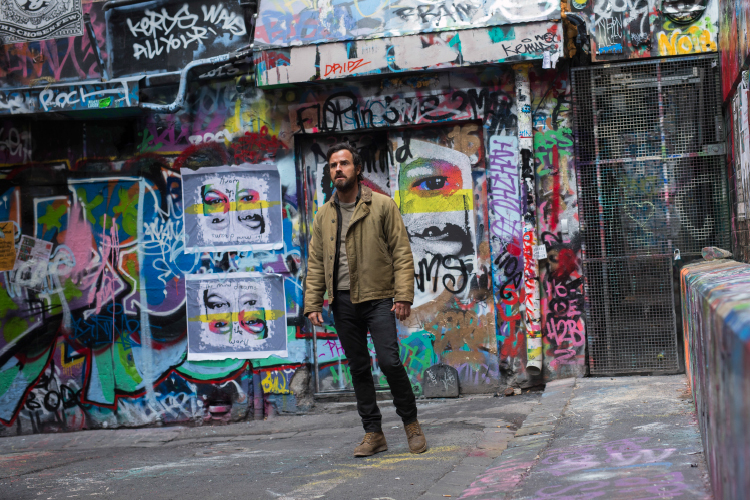 Theroux in The Leftovers

Do you think social media is making it harder to communicate?
Social media is just sort of this outrage machine where you get to shout whatever you want, and usually, you shout much louder than you would in person. It has the appearance of being democratic, [but] it’s actually not a democracy. Just because something has more likes doesn’t mean that more people believe that and vice versa. It’s more of a dictatorship on the internet than it is a democracy.

Given your fame and the platform that comes with it, do you find it your duty to speak up on issues that matter to you?
I do think I have a duty to speak up, but it’s tricky. From the few political things that I posted on my Instagram, [I was] immediately told to sit down, shut up, just act and be a monkey on a string. Hang on a second, just because I write or I’m on a television show, that doesn’t mean I’m not a citizen or don’t get to say what I think. I don’t think my opinion is more valuable than anyone else’s. But I get to have it.

The final season of The Leftovers premieres on HBO April 16.

Watch the trailer for the final season