New Yorkers love them some tattoos—and for good reason. When you have one, just walking down the street makes you a moving piece of art, contributing to the aesthetic that makes this city—the same one that helped birth another street art, graffiti—so vibrantly cool. While Native Americans have refined the practice for (at least) hundreds of years, NYC’s modern history with ink goes way back, too. Martin Hildebrandt opened the first U.S. tattoo shop in 1870 on Oak Street, in the shadow of the then-unfinished Brooklyn Bridge. In the first half of the 20th century, the Bowery was the crucible that helped define the national style. (Tattooing was illegal in NYC until 1997, but that never stopped us.) Today, a whopping 47 percent of Americans aged 18 to 29 are inked. Continuing our city’s proud tradition, some of the most incredible contemporary artists—in any medium—are working in a tattoo shop near you, pushing the art form forward. The art doesn’t stop there—there are plenty of great body piercing shops, too. 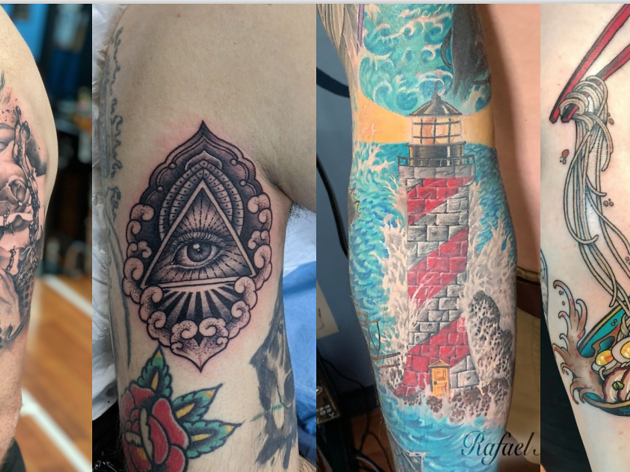 Best for those looking for both tattoos and piercings.

Specialty: Full and half Sleeve, new and old school, repair work, and a range of tattoo types.

Why we love them: Studio 28 prides itself on providing safe, clean and positive tattooing and piercing experiences, which is a relief, considering you’re about to get struck with a needle. . But the staff is extra careful and accommodating to make sure you receive exactly what you want.

Other than the ink, go: for a piercing! 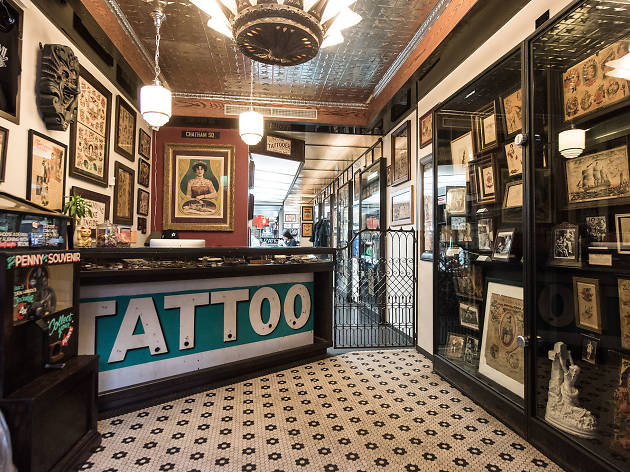 Why we love it: All great museums leave a lasting impression on your mind, but this may be the only one that also marks your skin for eternity. Daredevil, a shop and tattoo-history museum, just celebrated its 20th year. “We opened when tattooing was legalized in New York City,” says co-owner Michelle Myles. The walls are covered with artwork by tattoo innovators such as Samuel O’Reilly and Sailor Jerry, alongside antique tattoo machines and old-time sideshow banners from the early days of a taboo industry—and the museum is free to the public. Myles, co-owner Brad Fink, Diego Mannino (who drew this issue’s cover) and the other talented Daredevil artists genuflect before this rich tradition and then carry it into tomorrow.

Other than the ink, go: To see Thomas Edison’s patent on a device that is essentially identical to today’s tattoo machines. 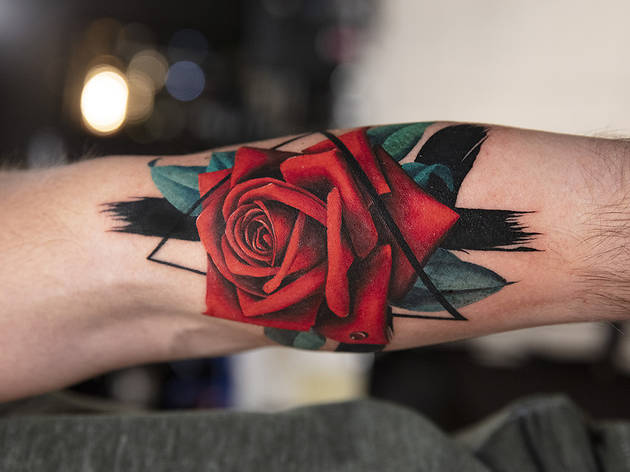 Specialty: ranges across its talented artists

Why we love it: This Chinatown tattoo parlour has an eight-strong roster of artists, with more invited in from around the globe. That means there’s quite a lot of expertise available, with a focus on different styles, from black and grey or color realism to fine line, neo traditional and, well, anything you want, pretty much. They’ll sort you out with a custom piece and artistically rendered pieces that leverage that expertise.

Other than the ink, go: If you want some cosmetic tattooing to enhance your lips or eyebrows? They can do that now, too. Check out their Instagram to see their work.

Venue says Looking for a first class tattoo? Book your next appointment with us by sending an email to info@firstclasstattoos.com! 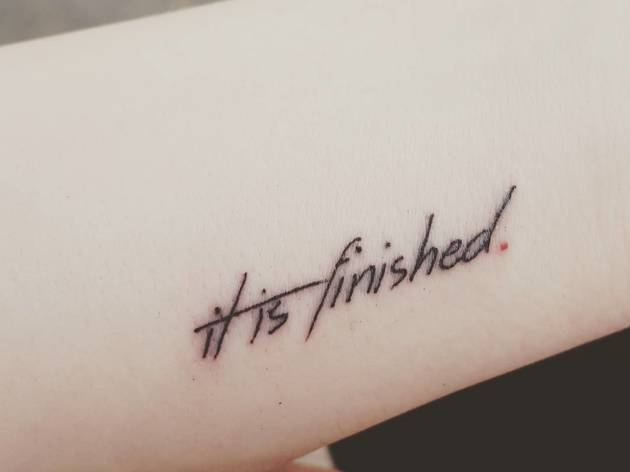 Why we love it: Sometimes you just need a little something to spruce up your self-expression. With JohnBoy, less is more. He can deliver simple, classic and understated tats that merge art with fashion. He's been tattooing for more than 18 years and got his start in the mid-west after leaving seminary college. JonBoy eventually took his career to NYC at West 4 Tattoo, where he helped bring fine line tattooing into the mainstream. He recently moved to Moxy Times Square as the resident tattoo artist. The best part is that JonBoy works with you to elevate your tattoo design so its meaning doesn't get lost.

Other than the ink, go: He's tattooed many celebrities, from Post Malone to Kendall Jenner. You may just come upon another celeb getting inked up. 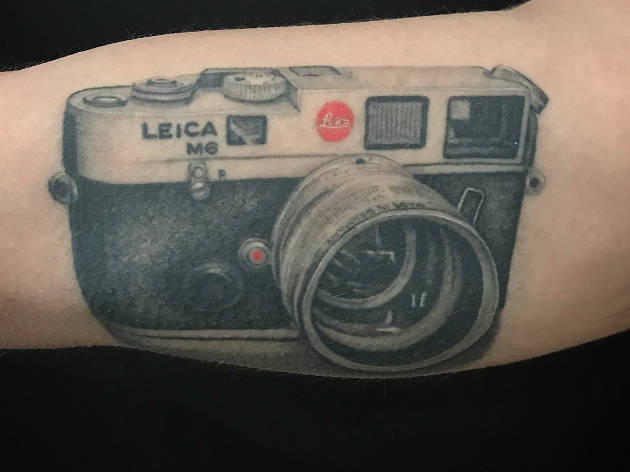 Best for covering up your regrettable tattoo

Why we love it: Art and craftsmanship come together in this high-end Alphabet City street shop. Josh Lord, who’s created tattoos for characters on HBO’s True Detective, sets the vibe at East Side Ink, which he fills with talented artists without pretensions. (Unfortunately, a lot of assholes populate this industry.) You’ll see everybody from neighborhood punks to Daniel Day-Lewis and Scarlett Johansson sitting in the chairs. And while East Side Ink is a legacy shop in NYC, they’re anything but stuck in the past.

Other than the ink, go: To laser off that ink you hate (25 percent of those who get tatted have regrets). Plus, one of the shop’s new services is microblading, the permanent cosmetic that is changing the face(s) of our city.

Best for a professionally rendered tattoo in a classic studio.

Why we love them: Don’t let the name fool you—there are more than three tattoo monarchs gracing the two floors of Three Kings—in fact, there are 15 permanent artists. Having that kind of infrastructure allows owner Matt Marcus (one of the regal founding trio) to accept walk-ins seven days a week, though some tattooists are booked through the year. Three Kings also brings in guest artists from all over the world. If you can’t find someone who can do the design you want here, chances are that person doesn’t exist. The shop currently has a pair of iPads that break down different styles, as well asportfolios for customers to peruse. Three Kings takes the consulting aspect of tattooing pretty seriously, and they can explain to you, in layman’s terms, just why getting a tattoo of your ex-girlfriend’s name on your neck might not be the best idea. 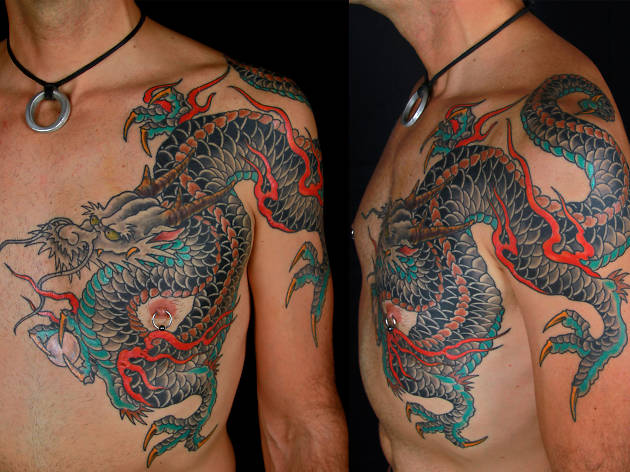 Best for the globe-trotter

Why we love it: Though almost 7,000 miles away from Tokyo, the New York tattoo scene is enormously influenced by classic Japanese techniques. You know the style’s imagery: koi fish, fu dogs, dragons, tigers, waves and wind. Japan can also be thanked for launching the modern ink craze: Brits in the Victorian era loved tattoos, as you had to travel to Japan to get them and were thus displays of wealth. The same designs from that century still permeate the culture, and a full-body suit can cost up to $20,000. While plenty of great NYC shops specialize in this form, artists at Senaspace are a dragon’s head above the rest.

Other than the ink, go: For artfully designed light fixtures that put your lampshades to shame. 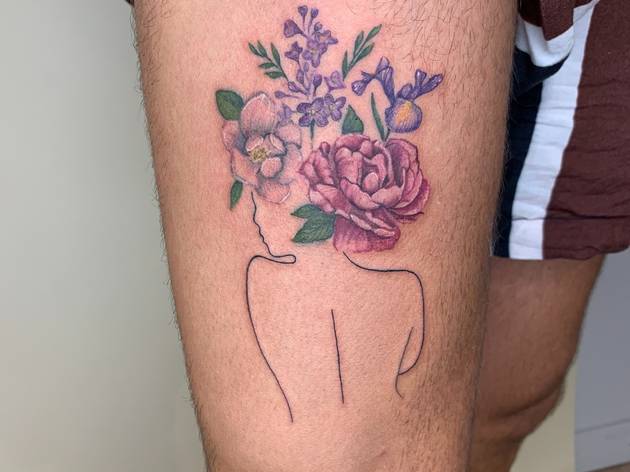 Best for getting a tattoo from nice people.

Why we love it: No one is pretentious at Nice Tattoo Parlor. The genuinely nice staff is skilled in all kinds of ink and they'll always deliver with clean-looking, detailed and beautiful results.

Other than the ink, go: For the calming, comfortable atmosphere and sweet company. 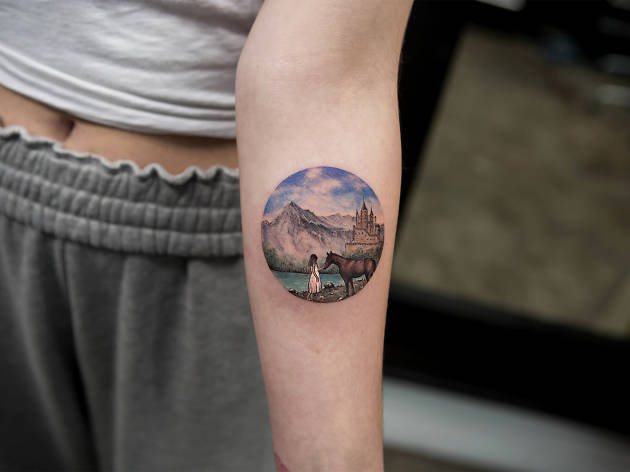 Best for the celebrity treatment

Why we love it: Chances are, you mindlessly scroll through your Instagram feed and double-tap countless photos of celebs flaunting their new tattoo. But did you check to see who they tagged? We’ll save you the research: It was Bang Bang. Keith “Bang Bang” McCurdy has been the go-to tattooer for VIPs—Rihanna, Odell Beckham Jr., Cara Delevingne and the Biebs, among them. But he’s far from the only star in this massive, super-slick shop: No matter the style, these artists can bring any of your ideas to life.

Other than the ink, go: For the experience. Bang Bang feels more like a hip penthouse than those grimy tattoo shops of yesteryear. 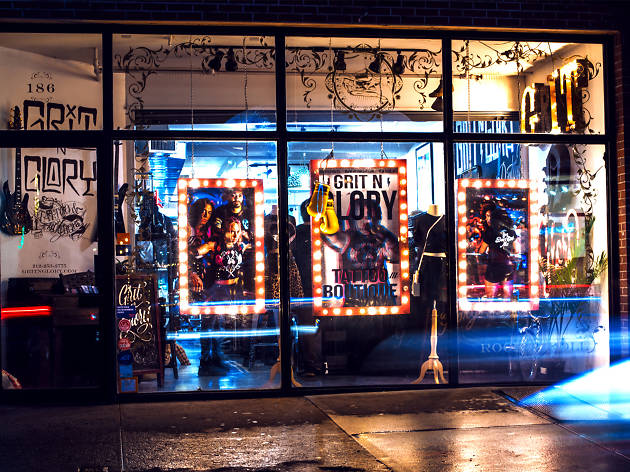 Best for nabbing a cool outfit along with your tattoo

Why we love it: Take a quick glance from across the street, and Grit N Glory appears to be just another one of the hundreds of fashionable clothiers that dot the Lower East Side. But once you step inside and move through the rock & roll boutique, you start to hear the telltale buzz of Megan Massacre’s tattoo machine. Massacre first became a household name as a star of NY Ink, where fans fell for her style, aura and art. With her reality-TV days in the past, it’s now her playful and bright illustrative tattoos that make people marvel.

Other than the ink, go: For cute puppies! As an avid animal-lover, Massacre hosts the yearly #TatsAndTails event, where people can get a cute pet-themed tattoo and adopt a furry friend from the ASPCA. 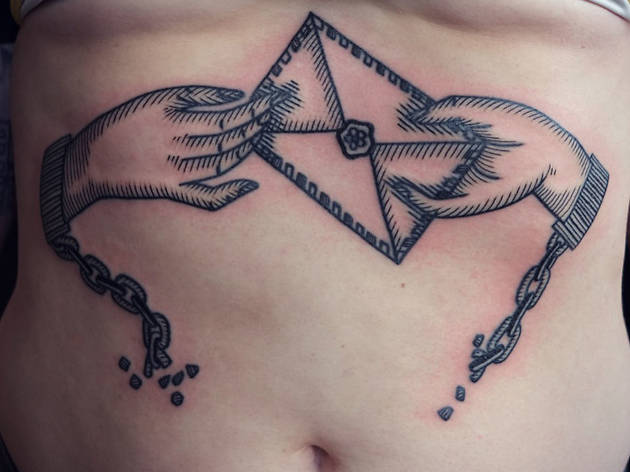 Best for sailors (or seafarers at the heart)

Why we love it: When he’s not too busy training pigeons or steering a Revolutionary War–era submarine down the East River, Duke Riley runs one of the most unusual tattoo shops in the city. This Greenpoint spot lovingly embraces the art’s maritime traditions, with many of the tattooers clearly influenced by scrimshaw: traditional carvings that sailors made during long voyages spent chasing Moby Dick. The vibe inside is noticeably warm and friendly. “Our intention is to make people comfortable when they walk through the door, not intimidated,” explains Riley. “If there is a cool club in the world of tattoo, we are definitely not in it. We are all just a bunch of outcasts doing our thing.”

Other than the ink, go: To listen to Sade. Yep, they play her music—often. One jerk even complained about it online, which just prompted East River to create a flash sheet dedicated to the elusive star. 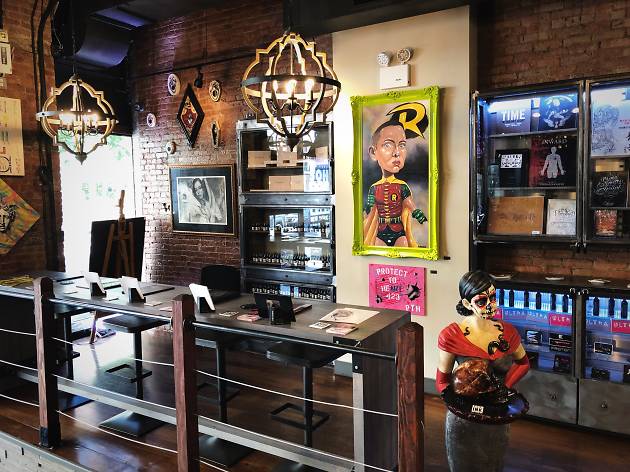 Best for body work with high standards in an authentic space.

Specialty: A wide-variety of styles offers and great customer service

Why we love them: Head to this well-appointed shop for all manner of inks and piercings, with resident and guest artists available to talk you through your next transformation. Cleanliness standards abound, and you'll be walked through every single step of care with a patient, super-chill staff. Whether you're a first-timer or an old fogie, you're certain to be taken care of here.

Other than the ink, go: to check out a well-curated selection of jewelry, t-shirts and more. 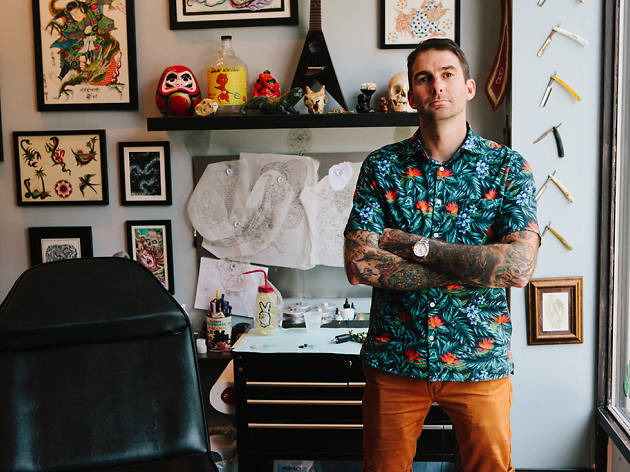 Best for getting that tattoo your mother wouldn't appreciate (no judgment!)

Why we love them: Artists in residence all have at least 10 years of experience each, and walk-ins are accepted. The crew has seen its share of weird request—they've blacked out the top of someone’s head—but never judge customers on requests. Can't make up your mind? Let the "Get What You Get" gumball machine determine your next tat for $100.

Other than the ink, go: This Crown Heights shop draws inspiration from years owners Josh Egnew and Jeremy Sutton spent collecting books of illustrations and art—many of which are on display in the shop.

Want to update your closet? 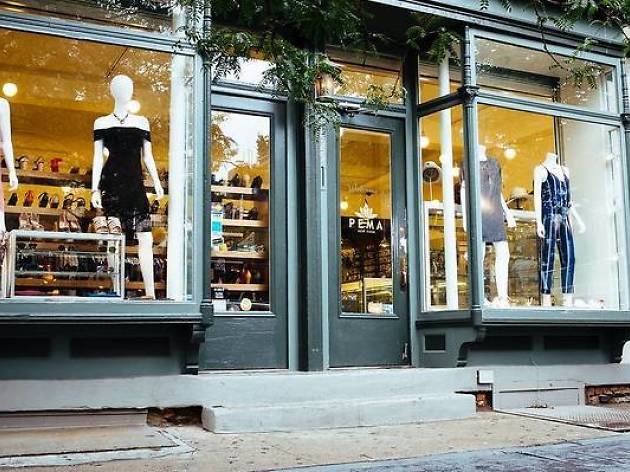