You know who doesn’t get much of a look-in at the Oscars - apart from stunt people and recently, Jack Nicholson? Location scouts. There is no Academy Award for the unheralded, jetlag-riddled job of finding the places that played host to the films of the year. Perhaps there should be. After all, what would Dune be with its Arrakis (actually Jordan) or The Power of the Dog without its turn-of-the-century Montana (aka the South Island of New Zealand)?

In the absence of formal recognition, and just for any film fanatic out there looking to combine their next holiday with a scenic movie pilgrimage – and because digging into the smoke and mirrors of movie locations is never not fascinating and fun – we’ve assembled a quick travel guide for this year’s Best Picture prospects. It’s ten films and about a zillion airmiles.

Everything you need to know about the 2022 Academy Awards 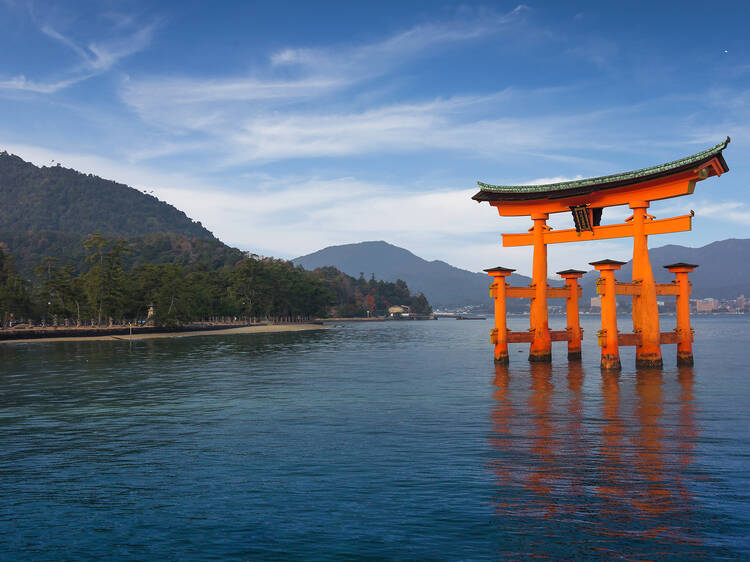 1. The tranquil seaside park in ‘Drive My Car’

Where to go: Yoshijimatsuri Park, Hiroshima

When Ryusuke Hamaguchi set out to adapt Haruki Murakami’s eponymous short story, he was going to film it in Busan, South Korea. He only settled on Hiroshima as a Covid-enforced compromise, but the port city proved a more-than-worthy backdrop for this wistful journey of grief and connection. If you want to retrace Drive My Car’s tyre treads, head for Yoshijimatsuri Park. This waterfront spot is where chauffeur Misaki takes grieving theatre director Kafuku as their relationship reaches a turning point. Locals often park up with some bait and a fishing rod in the hopes of catching something. Other key locations are the Peace Memorial Park, which honours the victims of the A-bomb, and Itsukushima Shrine, on the little island of Miyajima. Distinguished by its floating red torii gates, the shrine is printed on just about every postcard in Hiroshima Prefecture – but nothing comes close to seeing it IRL. – Emma Steen 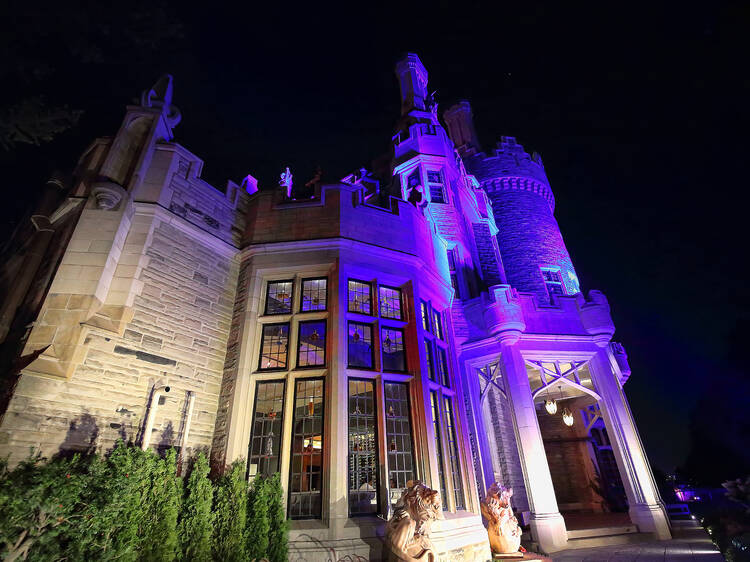 Where to go: ​​Casa Loma, Toronto

It’s at industrialist Ezra Grindle’s (Richard Jenkins) mansion that things begin to go severely south for Bradley Cooper’s grasping mentalist, Stanton Carlisle, in Nightmare Alley. The gothic pile itself is to be found slap-bang in the middle of Toronto: century-old castle Casa Loma welcomed Guillermo del Toro’s cameras for a second time (he also shot Crimson Peak here), and has done the same for X-Men movies, Scott Pilgrim vs the World and Handmaid’s Tale. Every film and TV show that has filmed here is represented in Casa Loma’s Hollywood Film Gallery, one of the exhibits accessible for the $30 entry price. – Phil de Semlyen 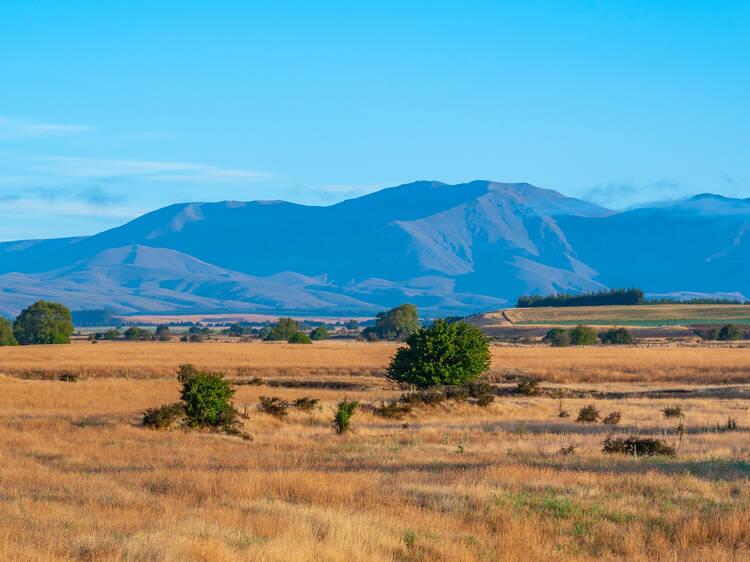 3. ‘The Power of the Dog’s far-off mountain range

Where to go: Hawkdun Ranges​, Otago

The co-favourite for Best Picture is set in the equally hot scrubland and plains of Montana, but was actually shot in the more temperate climes of director Jane Campion’s homeland. Montana, it turned out, was just too modernised to pass itself off as its early 20th century self. No such problems were presented in sparsely populated, endlessly scenic Otago in New Zealand’s South Island. The hill country of the Hawkdun Ranges provided uninterrupted views of… well, more hill country. The homestead belonging to Benedict Cumberbatch’s rancher was built from scratch, so you won’t find it, but you will find wide open spaces to satisfy even the worst case of post-lockdown wanderlust. Head to the pretty, Scottish-feeling town of Dunedin for more locations from the movie. – Phil de Semlyen 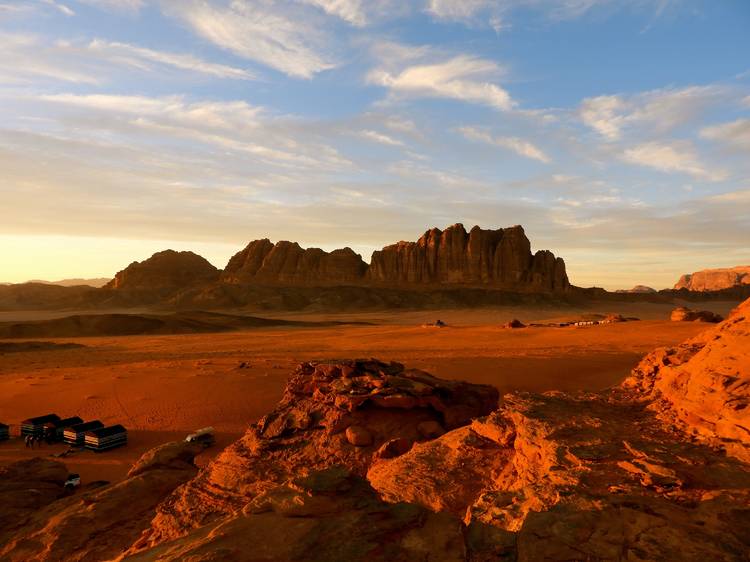 4. The extra-terrestrial landscape in ‘Dune’

Where to go: Wadi Rum, Jordan

The first part of Denis Villeneuve’s space epic was filmed among the extra-terrestrial landscapes of Jordan’s cinematically famed Wadi Rum. It’s been used in everything from Lawrence of Arabia to Star Wars: The Rise of Skywalker, Prometheus and The Martian, with Ridley Scott being a particular fan. Villeneuve’s more muted colour palette dimmed the ochres and reds of this ethereally beautiful sandstone and granite wadi, leaving it feeling less Mars-like than it does in reality, and more Arakkis-esque. It’s situated just a 90-minutes drive from Petra, of Indiana Jones and the Last Crusade fame. Natural beauty and movie history? What could be better? – Phil de Semlyen 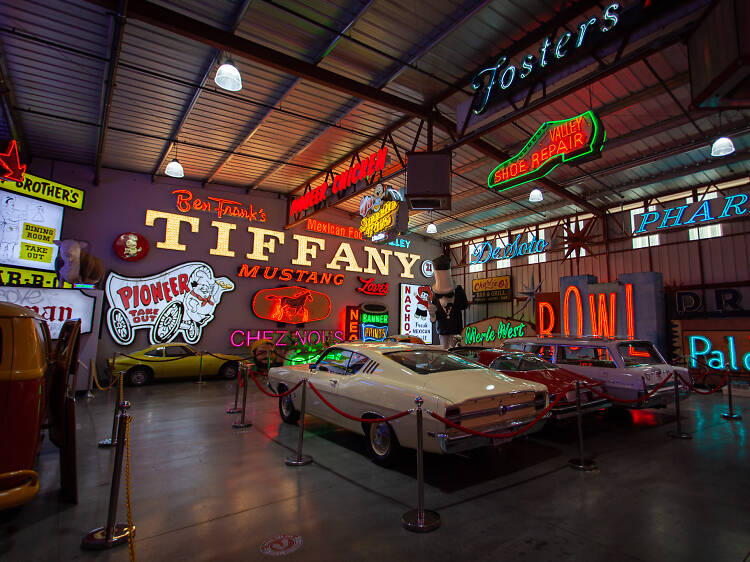 San Fernando Valley native Paul Thomas Anderson lovingly (but temporarily) resurrected some of the LA suburb’s bygone hangouts just to shoot Licorice Pizza. But you can always encounter a bit of that 20th-century nostalgia at the Valley Relics Museum. The Lake Balboa airplane hangar is stuffed with rescued neon signs, pinball machines, cars and other SFV ephemera, including from the film's namesake, defunct record store. (In fact, you can pick up a T-shirt with Licorice Pizza's steaming vinyl logo in the gift shop.)  The museum now houses two pieces of recognisable Licorice Pizza-bilia: the Tail o’ the Cock sign and a 76 ball. Drop by for a slice of Oscar-endorsed Valley lore. – Michael Juliano 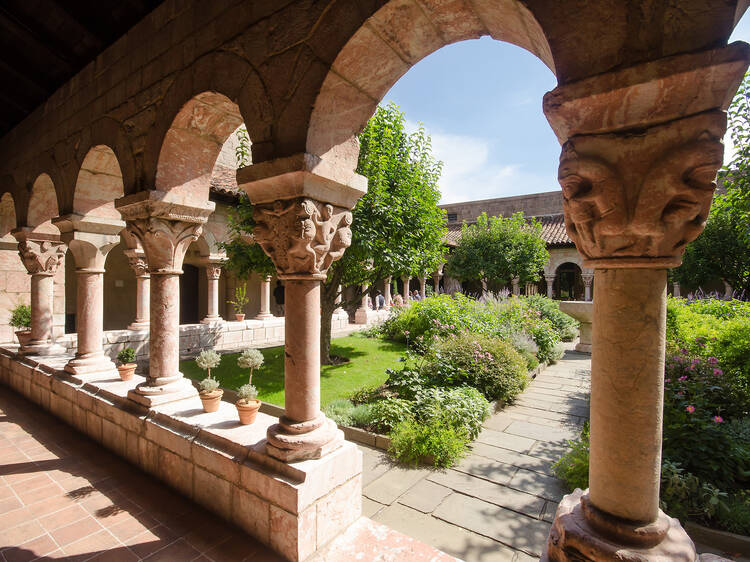 6. The Romeo and Juliet-like cloisters in ‘West Side Story’

Steven Spielberg’s West Side Story makes much greater use of New York locations than Robert Wise and Jerome Robbins’ more set-heavy 1961 version did back in. There’s at least nine locations in Manhattan and Brooklyn to take in on a Jets-and-Sharks pilgrimage, of which the Met Cloisters would be our top pick. It’s here that the film leans hard into its Romeo and Juliet-inspired origins, with Tony and María’s first date filmed in the midst of the Washington Heights​ ​​museum's ​medieval art and architectur​al wonders​. – Phil de Semlyen 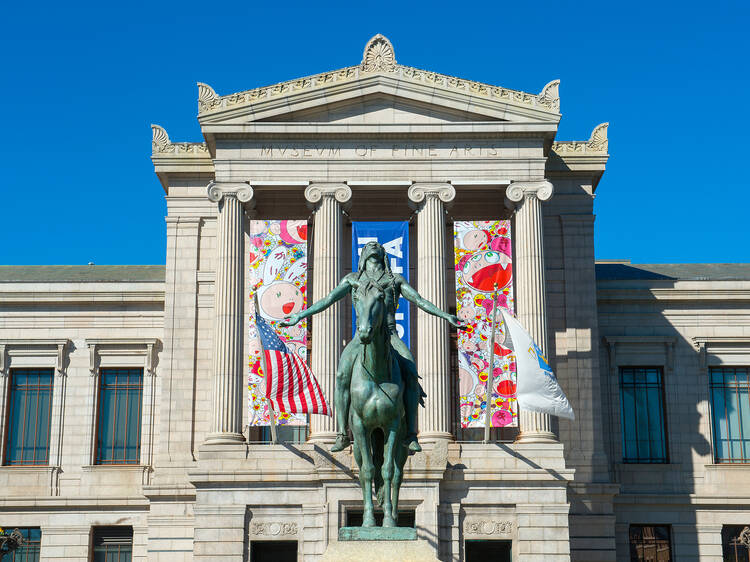 Where to go: Museum of Fine Arts, Boston

It isn’t just gritty gangster flicks and police procedurals that shoot in Boston, apocalyptic black comedies swing by from time to time too. Adam McKay’s polarising eco-satire was shoot in and around the city, with its most immediately recognisable location, the Museum of Fine Arts, playing host to a big speech delivered by Jonah Hill at the film’s sharp end. Look out, too, for appearances from the Howl at the Moon bar, South Station and Fairmont Copley Plaza hotel. Beantown locals may not want to hear this, but the city stood in for New York during the shoot. – Phil de Semlyen 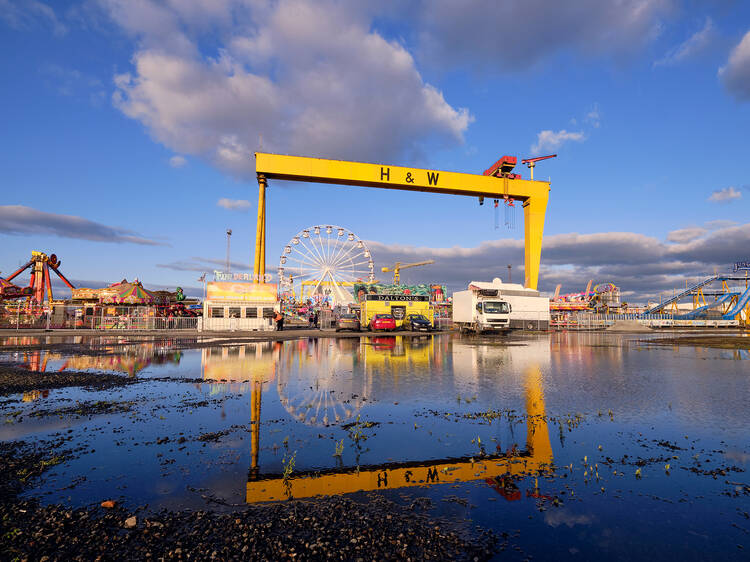 8. The two iconic cranes that star in ‘Belfast’

Where to go: Titanic Quarter, Belfast

The house where Sir Kenneth Branagh grew up, on Mountcollyer Street in north Belfast, no longer exists, and the street itself is now empty of buildings, so he had to recreate his childhood home on a set in Berkshire. That means you’re pretty much out of luck for Belfast locations in Belfast. What you can do, however, is visit the places in those opening shots and admire how far the city has come. The two gigantic shipping cranes seen in the film’s prelude are a local landmark; known locally as Samson and Goliath, they tower over the skyline from the Titanic Quarter. You can also visit the City Hall (which is where the airport bus actually leaves from, Sir Ken) and climb the Cave Hill for a panoramic view of all Belfast. – Helen O'Hara 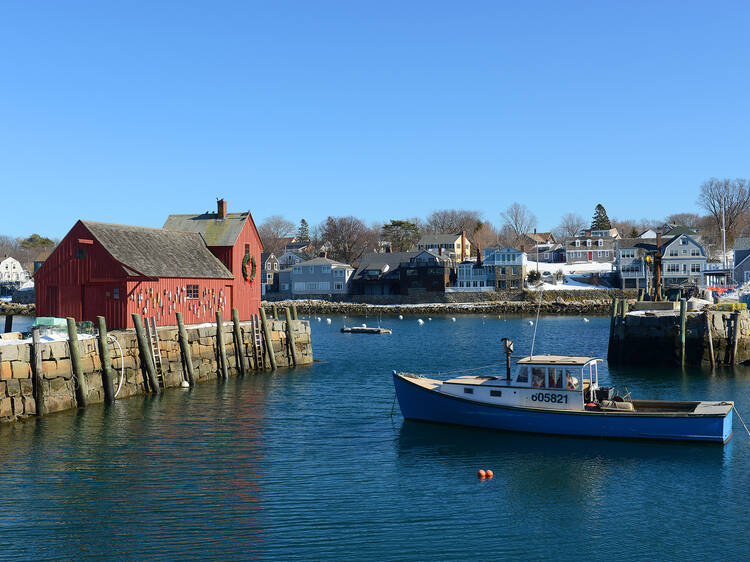 Where to go: Gloucester, Massachusetts

Great movies seem to be drawn to New England’s coastline. Maybe it’s quality of the light, maybe it’s the clams and craft beer. Either way, the feelgood family drama CODA has joined the likes of Jaws, Carousel and Manchester by the Sea in making Hollywood location scouts learn how to spell ‘Massachusetts’. The movie - a Sundance breakout that has grown into a strong Best Picture contender - follows the daughter of two deaf parents who works on the docks of Gloucester, a coastal town on Cape Ann renowned for its seafaring past. It’s one of the few films on this list to be shoot where it’s set: the town’s Fish Pier hosted the production. For anyone looking to combine some film tourism with whale watching, sailing or just a mooch by the Atlantic, it’s only 45 minutes from Boston. – Phil de Semlyen 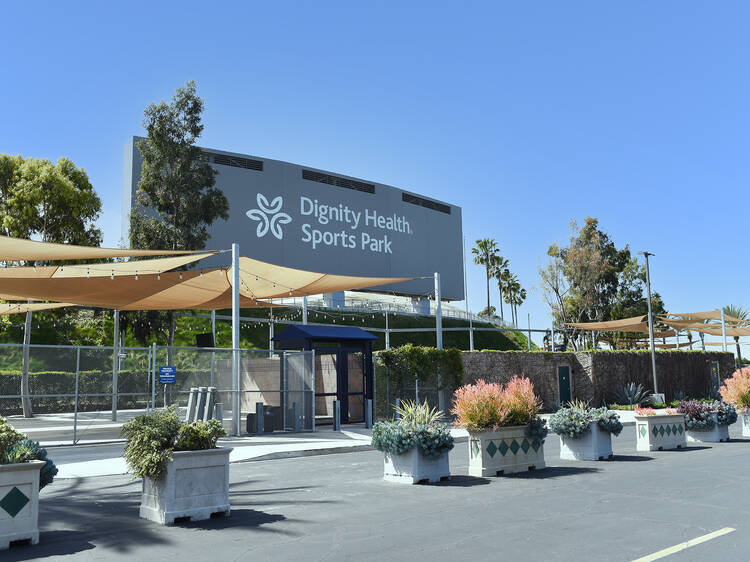 Where to go: Carson, California

Unless you have a racket in hand, you may not particularly care to visit most of the tennis courts that were used to shoot King Richard. But you just might catch a match – be it tennis, boxing or soccer – at Dignity Health Sports Park, the Carson stadium complex that stood in for Venus Williams’s first pro tournament. Wander the grounds to find the country’s only Olympic-caliber velodrome, or duck into the art gallery to find an exhibition from acclaimed LA artist Lauren Halsey. – Michael Juliano