The 10 most Instagrammable places in Frankfurt

Between its vast skyscrapers, old buildings and bridges across River Main, this city is practically begging for a photo

There are few cities in the world where you can snap both neck-wrenching skyscrapers and stunning historical buildings just a few minutes apart. When it comes to diversity, Frankfurt is a photographer’s dream. If it’s the urban landscape you’re after, Germany’s financial capital has it in spades—this is one of the few European cities with a large cluster of high rise buildings in its downtown area. While much of the city’s historical architecture was destroyed during World War II, billions of euros have been sunk into rebuilding efforts. Most recently, 15 historical replicas were returned to the city. Then there’s the scenic River Main, connecting old and new by almost a dozen bridges. From a museum with a verdant green lawn punctuated with porthole skylights to a building dating to the middle ages with a distinctive tiered gabled roof, these are the most Instagrammable places in Frankfurt.

A verdant green lawn punctuated with porthole skylights draws light into a subterranean extension at the Staedelmuesum, Frankfurt’s citizen’s museum. Completed by architecture firm Schneider + Schumacher in 2012, the extension doubled the museum in size, adding 3,000 square meters of light-flooded exhibition space for a collection of European art history spanning 700 years, from the early fourteenth century to the present. On Thursday and Friday, the museum is open until 9pm, allowing the opportunity to snap the glowing portholes at night. Tickets are 12 euros for adults—however, the museum is included in the 18 euro Museum Embankment Ticket, which gives access to 34 museums over a two-day period.

Click on hot Frankfurt hashtag #Frankfurtdubistsowunderbar (“Frankfurt you are so wonderful”), and you’re sure to scroll through striking images of the Römer (City Hall) and its distinctive tiered gabled roof. Office to the city’s mayor, this three-story building complex, now nine interconnected buildings, has served as Frankfurt’s main city hall for 600 years. The former Patrician Villa Haus Römer is the middle building in a set of three facing the cobblestoned Römerberg square (home to the Frankfurt Christmas Market starting in late November). While sections date back to the middle ages, the Römer was mostly destroyed during World War II and 30 years passed before it was returned to its former glory in 1975. With a little luck, you’ll catch the Römer during events such as the Frankfurt Book Fair, when the building is turned over to light artists to be completely transformed.

All the bridges over the River Main make for an excellent photo-op, but an easy stroll from the Römer is the neo-Gothic-style Eiserner Steg (Iron Bridge), an iron and concrete pedestrian bridge connecting the city center and Römerberg with Sachsenhausen on the southern banks of the Main River. Built in 1869 (and built again after World War II), the bridge’s curved iron arches are immortalized in several Expressionist paintings by German artist Max Beckmann. While the lover padlock trend has hit this bridge in full-force, perhaps more interesting is a shot of the bridge or the skyline of the financial district—you’ll find an excellent view of the city’s second tallest structure, the Commerzbank Tower. Achieve the best photos at dusk during the winter months; when the days are short during office hours Monday through Thursday, lights are turned on in offices, illuminating these architectural marvels.

Trains from all over Europe have been running through Frankfurt (Main) Hauptbahnhof, the city’s main train station since 1888. The three huge halls of steel and glass, designed by German architect Hermann Eggert, were extended in 1924 with two neoclassical halls, and today the railway station is the busiest in Europe. With 24 platforms and 26 tracks on one level, Frankfurt HBF is also a feat of engineering, revealed in full glory from the nearby Main Tower’s observation deck. Alternatively, capture the station at dusk when the clock, with its two symbolic statues for day and night, is illuminated on the eastern facade.

Berlin has the Reichstag and Frankfurt has the MyZeil, when it comes to Germany’s dramatic glass buildings. Roman architect Massimiliano Fuksas was thinking about rivers when he designed the fluid shape of the shopping mall’s mostly transparent glass and steel shell, which plunges from an undulating roof to draw natural light throughout all six levels of retail space. Part of the Palais Quartier development project—which also includes two hi-rise buildings and the reconstructed Palais Thurn und Taxis, a palace from 1793—the MyZeil opened in 2009. All that glass will give you an interesting selfie; try one inside, where the glass plunges near the 42-meter-long escalator, the longest interior escalator in Europe.

Sometimes when you really like something you see it everywhere. Despite being green-tinted, the cylindrical glass Westhafen Tower recalls a nice tall glass of apple wine to Frankfurt’s locals. They call the 30-story office tower Ebbelwoi, the colloquial word for the state beverage—something not exactly intended by the building’s architects, Schneider + Schumacher. Either way, the 3,500 glass triangles composing the facade on this skyscraper are highly reflective, allowing endless opportunities to explore their interaction with light and weather. A photo of the tower is particularly interesting in summer, when some of those triangles are revealed to be windows drawing cool breezes inside.

In front of the MesseTurm (Trade Fair Tower), a gigantic man is busy at work, hammering. Conceived by artist Jonathan Borofsky as a symbol of the worker in all of us and commissioned for the building in 1990, “Hammering Man” is a 21-meter-high painted steel kinetic sculpture, with a motorized arm continuously swinging a hammer back and forth. Replaced in 2007 after corrosion and vandalism, the unusual sculpture is the second largest in a series—Seoul is home to a bigger cousin. It’s best shot at sunset, when the sculpture darkens, or in the morning when it casts a long shadow. A scenic park and fountain can be found nearby.

Fuchsia flamingos, romping striped zebras and fat green tree frogs—nature’s fauna makes for riveting color compositions. Founded in 1858, the Frankfurt Zoological Garden is one of the world’s oldest zoos and currently home to some 4,500 animals and 450 species. While a bright sunny summer day will provide the right leafy green backdrop and light, many of the animals are shy—you might have better luck in the morning or evening around feeding time. Video can take a starring role here; showstoppers include noisy seals, otters at play and pensive gorillas.

Some of the most arresting skyline shots of Mainhattan’s skyscrapers angle them with the Main River—so why not snap Frankfurt by boat? With daily departures, Köln-Düsseldorfer Deutsche Rheinschiffahrt offers a one-hour panorama cruise, with the Römer, the Museum Embankment and St. Paul's Church among the sites gliding by while you soak in commentaries on the past, present and future of the city on the River Main. A weekend highlight offered by the Primus Linie is the Sunday brunch tour, with Caprese salad and smoked salmon among buffet options. Both boat tour companies offer table seating and beverages—and an alternative view of the city that sweeps you right off your feet.

An 1880 building designed by architect Richard Lucae, the Alte Oper Frankfurt was one of the most celebrated opera houses in the world until World War II left it a ruin. It wasn’t until 1981 that the much-loved building once again opened its doors to receive the city’s cultural elite, returned to former glory thanks to extensive fundraising efforts. Today the opera house and concert hall attracts some 475,000 visitors to around 450 cultural events a year. The reconstruction restored many of the original decorations, reliefs, medallions, frescoes, tiles and mosaics—all beautiful under the lens. To best capture the building with its arched windows and doors, frame your shot with the old-fashioned four-pronged street lamps in the adjacent historical square.

Check out more places worth capturing 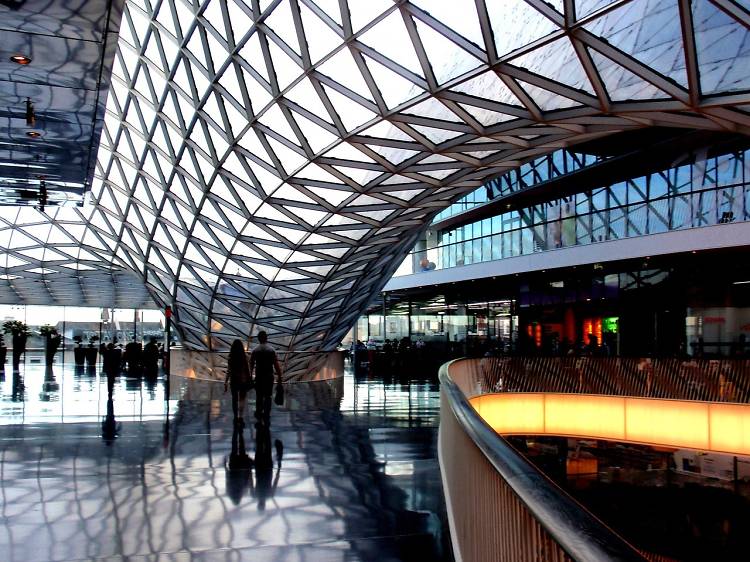 The 10 most beautiful buildings in Frankfurt

From a greenhouse formed as a cluster of flowers to a contemporary mall that sucks visitors in through a vortex, as well as one of the oldest churches in Germany, here are the ten most beautiful buildings in Frankfurt.