The 10 most beautiful buildings in Hamburg

This bustling port city is ripe with architectural marvels, from nautical-inspired landmarks to surviving pre-war venues

Hamburg architecture—much like its restaurants—draws richly on its maritime tradition. Whether in the UNESCO World Heritage warehouse district of the Speicherstadt or the vivid nautical forms of the Dockland Office Building and the Elbberg Campus, buildings old and new are informed and inspired by a rich history of trade and shipping. Many of the city’s most exciting new buildings, not least the spectacular Elbphilharmonie, center around the rejuvenated HafenCity district, while the Altstadt includes several historic buildings which thankfully survived World War Two air raids, among them the Rathaus, St Michael’s Church and Chilehaus, one of the most outstanding examples of 1920s Brick Expressionism.

Most beautiful buildings in Hamburg 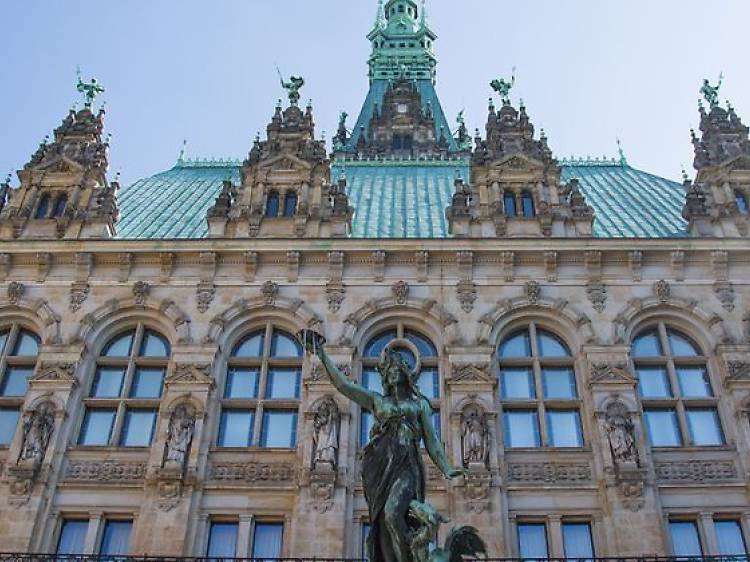 The ornate, neo-Renaissance town hall is a good place to start your Hamburg tour, flush as it is with the city’s proud and prosperous history. Built between 1886 and 1897 at the heart of the Altstadt, it’s a vast sandstone statement of wealth, sovereignty and Hamburg’s membership in the Hanseatic League, the strategic alliance of cities—among them also Lübeck, Tallinn, Rostock and Riga—which dominated Northern European and Baltic trade for some 400 years. The Rathaus is fronted by a mosaic of Hamburg’s patron goddess, Hammonia, the city’s coat of arms and the Latin city motto: Libertatem quam peperere maiores digne studeat servare posteritas, “The descendants shall seek worthily to maintain the freedom achieved by their forebears.” 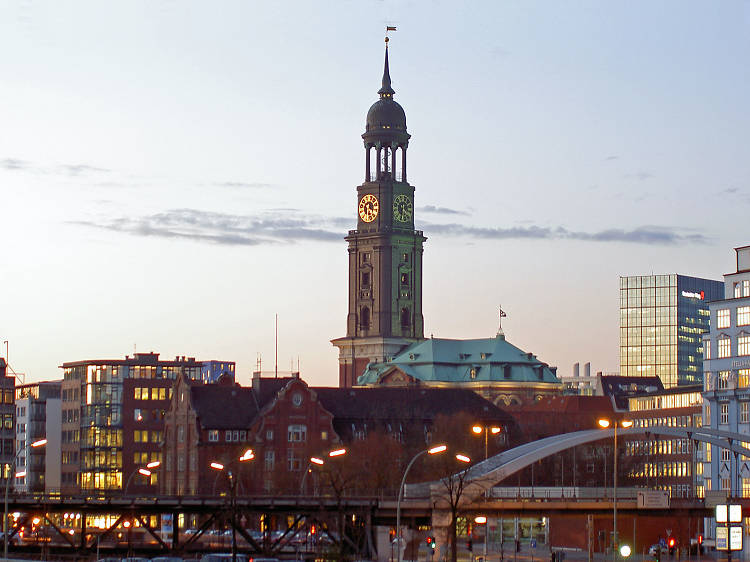 Long a beacon of the Hamburg skyline, not least for ships making their way up the Elbe, the Lutheran church of St Michael (colloquially known as “Michel”) is the biggest and most famous church in Hamburg. With capacity for 2,500 people, it is one of the most grand-scale examples of the Protestant Baroque, which gladly absorbed the capacious grandeur and movement of the Catholic Baroque, but without the Counter-Reformation drama. The church’s luminous white nave is framed by undulating galleries and gold-capped Corinthian columns, leading up to a marble pulpit, baptismal font and a 20-meter high marble altar, depicting the Last Supper, Crucifixion and Resurrection. At 106 meters, St Michael’s bell tower (accessible by steps or elevator) offers one of the best Hamburg city views, as well as a much-loved trumpet call from the bell tower at 10am and 9pm Monday to Saturday, and 12 noon on Sundays. 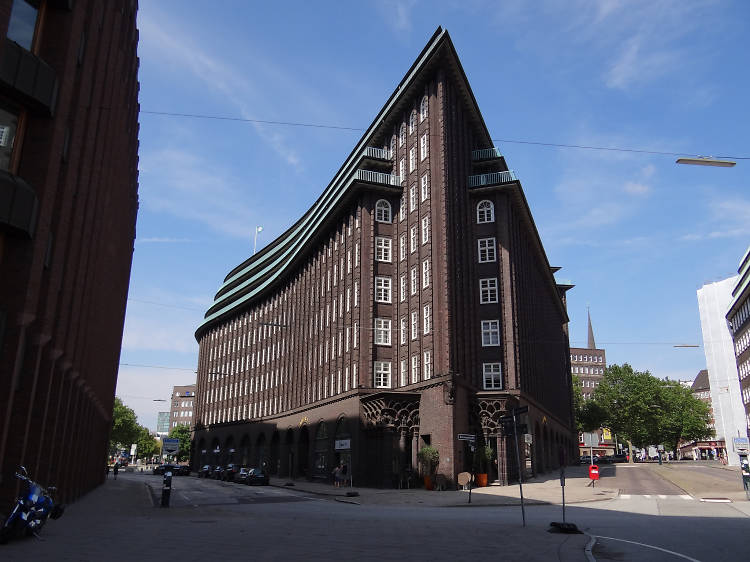 Ten stories high and covering a near 6,000 square meter site, the Chilehaus is one of the most distinctive buildings in Hamburg and a first-class example of the Brick Expressionism which flourished in Germany and the Netherlands during the 1920s. Built between 1922 and 1924, it was commissioned by a shipping magnate who had made his fortune in Chile (hence the name), and it became an important flagship for Hamburg’s post-World War One recovery. Best viewed from the east, the building is built between two streets and designed to resemble a vast ocean liner. Its two long wings curve along Pumpenstraße and Niedernstraße, framing grandiose inner courtyards, and meeting at an extraordinary, prow-like tip—one of the sharpest architectural angles of its kind. 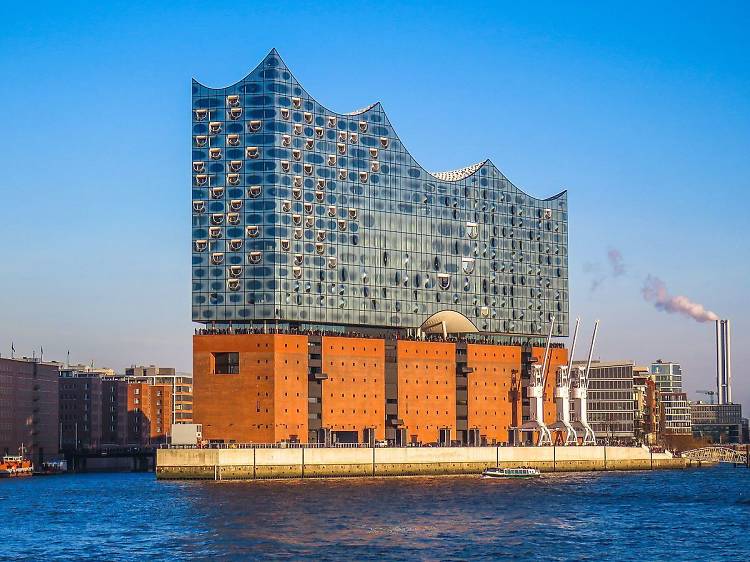 A frequent front-runner on ‘best building’ lists, the Elbphilharmonie is Hamburg’s pride and joy. On a peninsula in the HafenCity district, the Herzog & de Meuron-designed concert hall tops the 1960s red-brick Kaispeicher, formerly Hamburg’s biggest warehouse, with a vast new glass-fronted structure which reaches 108 meters at its highest point, making it the city’s tallest inhabited building. Fronting out to the Elbe like an illustrious liner, the building counterpoints its hefty scale with shimmering textures, its roof undulating like wave crests and its façade of 1,000 curved and carved window panels rippling with river and harbor reflections. Inside, the Elbphilharmonie houses three concert venues as well as a hotel, residential apartments, various eateries and a public “Plaza” viewing platform. 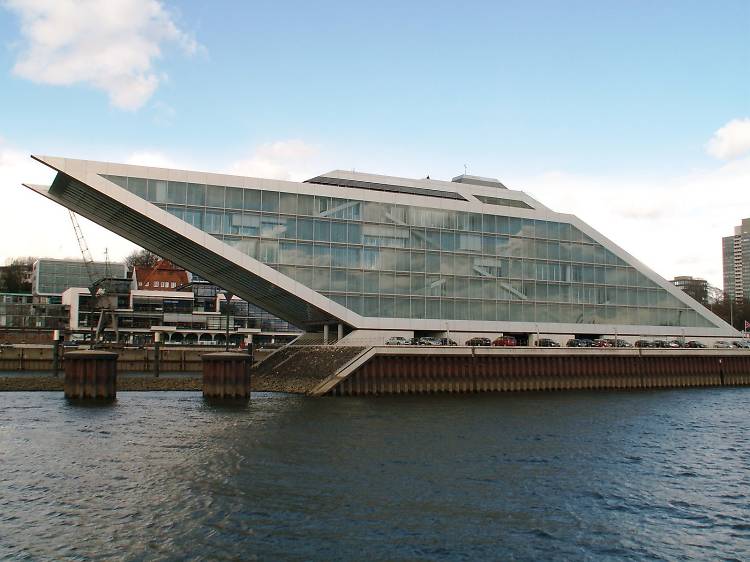 One of the highlights of a Hamburg harbor tour, the Dockland Office Building sits on a protruding spit on the north bank of the Elbe, opposite the Hamburg container terminal and demarcating the ‘harbor gateway’. Of all the city’s nautical architectural flourishes, this structure most vividly follows a ship form, with its steel and glass rhomboid at a dramatic 66º angle and its ‘bow’ jutting out 40 meters beyond the edge of the land. Tiered steps running up the building’s incline lead to a rooftop viewing platform. 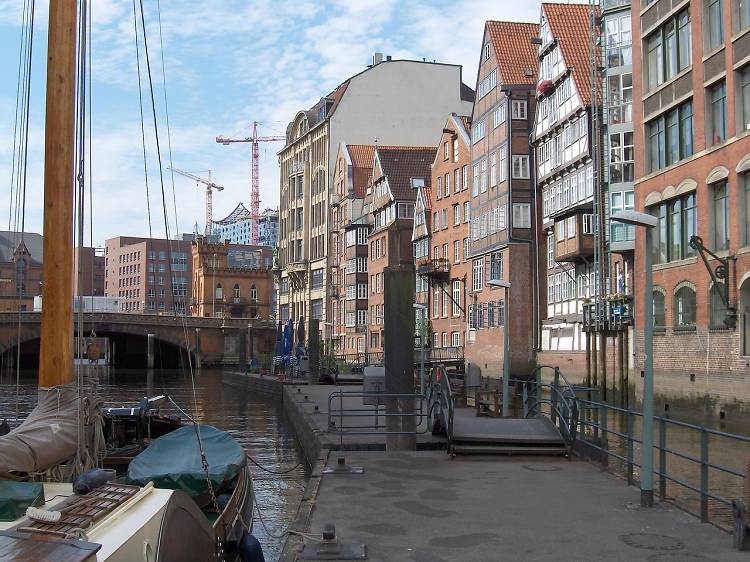 Running parallel to the Nikolaifleet canal, Deichstraße is the oldest street in the Altstadt and features some of the oldest surviving buildings in the city. The great Hamburg fire of 1842 broke out at Deichstraße 42, but the wind drove the flames northwards, sparing the street’s southern end. During the 17th and 18th centuries, before the construction of the Speicherstadt, these picturesque red brick buildings accommodated the homes, offices and storage rooms of wealthy Hamburg merchants. Today, the street has several cafes and restaurants, making it a neat stopover between the Altstadt and Speicherstadt. 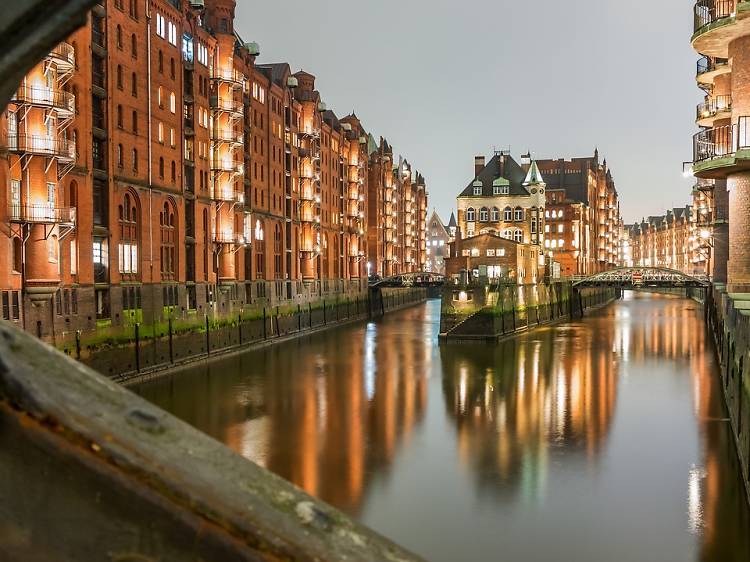 The Speicherstadt comprises not just one building, but a vast UNESCO World Heritage red-brick complex which qualifies as the largest warehouse district in the world. Tucked between the Altstadt and the Hafen City, the 1.5 km segment is another testimony to Hamburg’s history of proud autonomy and maritime might, built between 1883 and 1927 as a customs-free zone to store and transfer goods. Striated by two main canals, and with its western tip to the Elbe, the Speicherstadt impresses not only with its scale and smart design—allowing for both land and water access to its multistory buildings—but also in its neo-Gothic elegance, particularly resplendent when spot-lit after dark. 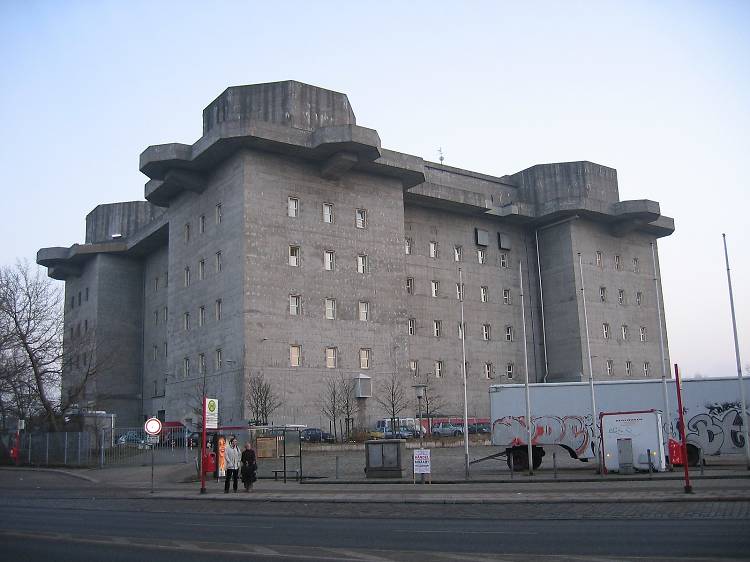 It’s no surprise that Flakturm IV survived the Hamburg air raids; along with similar towers in Vienna and Berlin, this colossal concrete monolith in St. Pauli was built during the Second World War as a staging site for anti-aircraft artillery, with the cavernous, densely-clad interior doubling as an air raid shelter for Hamburg civilians. The Flak towers were so densely made that demolishing them has proved more cost and trouble, than it’s worth. Many remain empty and unused but Flakturm IV—though far from a conventional architectural beauty—is an invigorating case study in urban rejuvenation. Today, the building houses a music school, instrument store and the popular nightclub Übel & Gefährlich. A team of residents and architects has also recently secured planning permission for a staggered roof garden atop the tower, complete with urban food production schemes and 360-degree views. 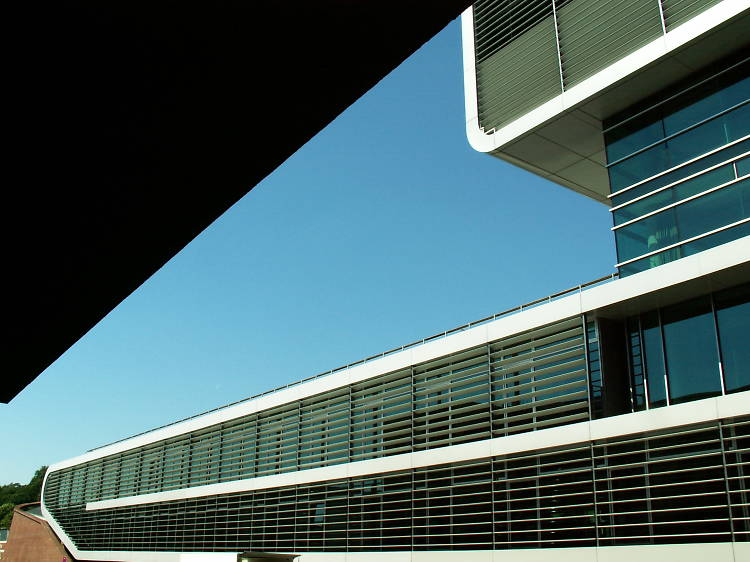 If you’re more interested in contemporary building than Hanseatic pomp and elegance, the Elbberg Campus by Hadi Teherani, completed in 2005, is a tucked-away gem set above the Elbe in Altona. A mixed-use commercial and residential complex, the campus neatly integrates offices, apartments and a public terrace into its sloping site, with staircases and staggered terraces offering a thoroughfare from the Altonaer Balkon park to the waterfront, as well as some great harbor views. With plenty of wooden decking and the main building designed to remember a container ship, it’s another pleasing exercise in nautical forms. 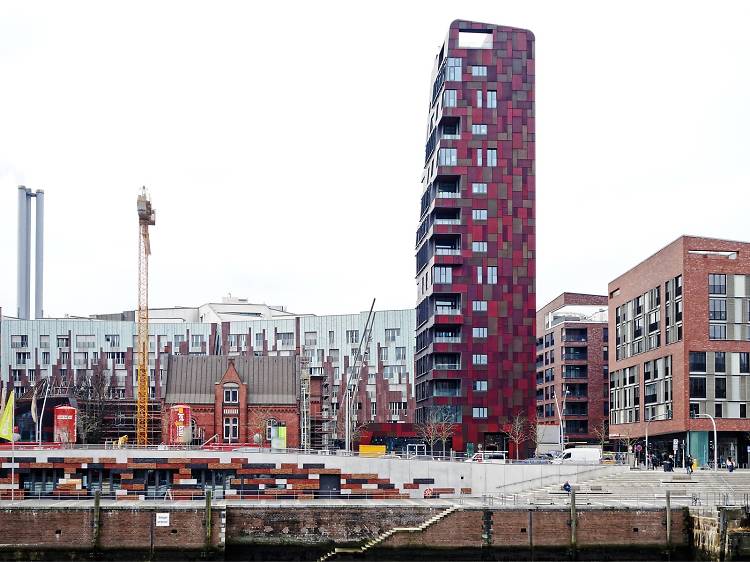 Another newcomer to Hamburg’s architecture and star of the broader HafenCity rejuvenation, the Cinnamon Tower by Bolles & Wilson was completed in 2015. Housing ten apartments, the building was conceived as an Italianate campanile in the heart of the harbor district, offsetting the broad horizontality of the surrounding architecture with a tapering 56-meter block and extremely compact plan area of just 13 by 16 meters. As much as its near-teetering slenderness, the Cinnamon Tower is notable for its façade—a patchwork of anodized aluminum panels in different shades of ochre, russet and burgundy, together redolent of a warm-hued Paul Klee canvas.