While the Jaffa port has been around since the start, Tel Aviv has developed a newer northern attraction at the opposite end of the sandstrip. During the day, Namal Tel Aviv (the Tel Aviv Port) is surrounded by action: Tel-o-fun bikers on their way to Park HaYarkon, shoppers enjoying the outlet overload, families waiting in line for weekend brunch, and friendly fisherman catching their own. At night, the area’s hangars transform into Tel Aviv’s most happening nightlife scene, hosting crazy parties, community events, and all-night Jazz jams. Come see for yourself at the city’s trendiest hotspot. 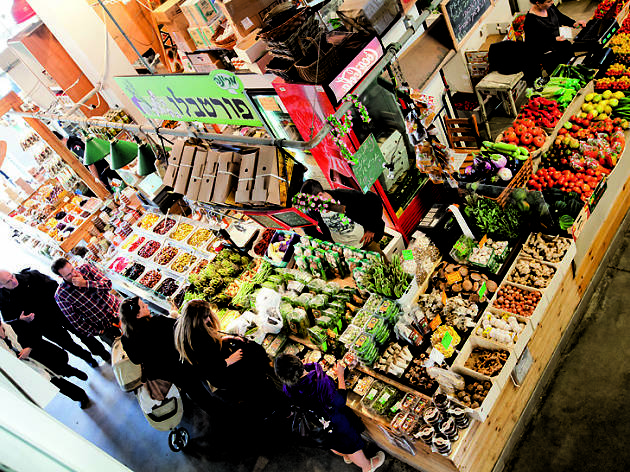 Like San Francisco’s Ferry Plaza and Barcelona’s Boqueria, Israel’s latest market is an indoor offering of the freshest ingredients peppered with live demonstration cooking stations and upscale, fresh food eateries. Be sure to indulge in the handmade pasta bar. 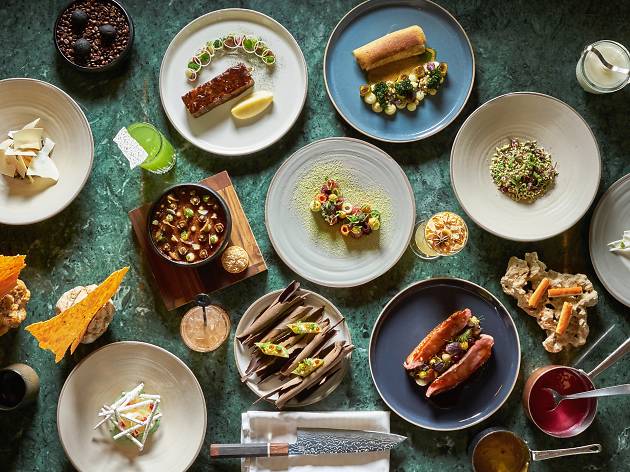 Located in the Tel Aviv port's indoor market, Kitchen Market offers gorgeous views of the water while dining on creative food with excellent ingredients, conveniently, from the market. Enjoy one of the top spots on the city here while indulging in contemporary Israeli food brimming with creativity. This is harmonious food that surprises and soothes at the same time. 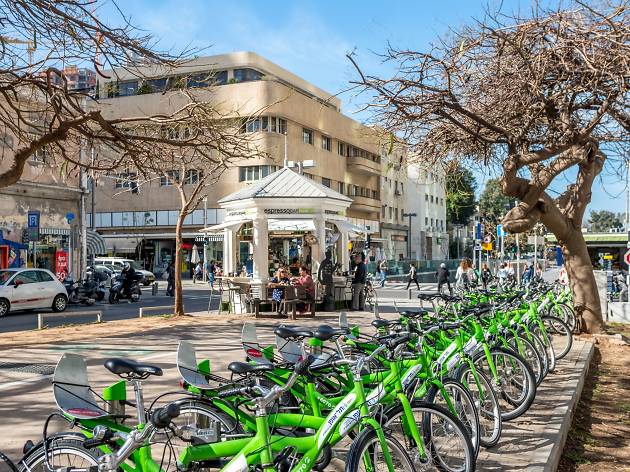 Ever dreamed of experiencing the chaotic roads like a true Tel Avivian? Well, now you can with these green machines. Tel-O-Fun bicycles are modern, safe, 3-speed bicycles located throughout Tel Aviv. The perks of this green energy alternative are that the user can purchase the bike for varying periods of time and can return the bike to any location in Tel Aviv. Not only that, after purchasing an extremely affordable day-pass, the first 30 minutes are free! As Tel Aviv is highly accessible by bike, the Tel-O-Fun program is an awesome way to explore the city while living like a local. From day to week passes, this ingenious program grants you the freedom and fun of having a bike without the worry of bike theft. So grab one of the signature green bikes and ride along Tel Aviv’s warm and stunning coastline over to Park Hayarkon for an afternoon of exploring. 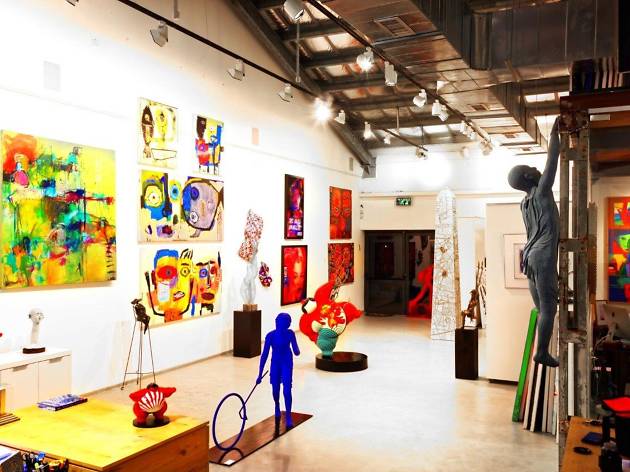 As you step inside the Art Market Tel Aviv’s colorful, spacious showroom, you’ll leave Tel Aviv and enter Soho, New York. The inviting gallery space in the Tel Aviv Port is part of the Bruno Art Group and nearly a century old. With an extensive collection including works by emerging and acclaimed artists, both Israeli and international, the gallery sells works at a wide range of prices, so you don’t need to be a mogul to pick up a piece for your living room. 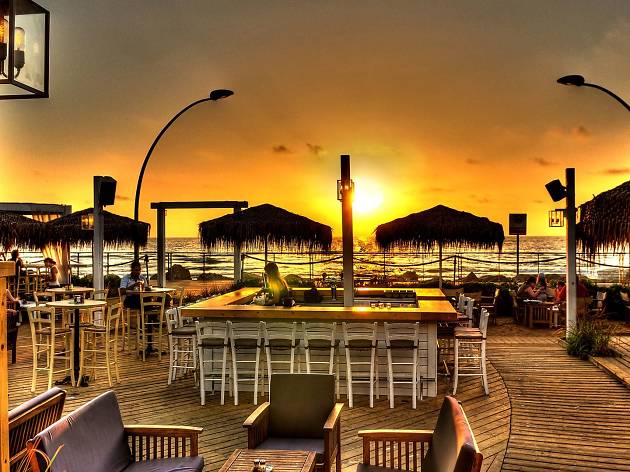 Overlooking the Mediterranean waters of Tel Aviv's Port, known to the locals as “The Namal,” this lush, chic and inviting open-plan bar is celebrated for its distinctive choice of beats amidst the bewitching sea breeze. Head down for an afternoon beer that will surely turn into an evening cocktail. Sunset to sunrise, Shalvata has you covered. 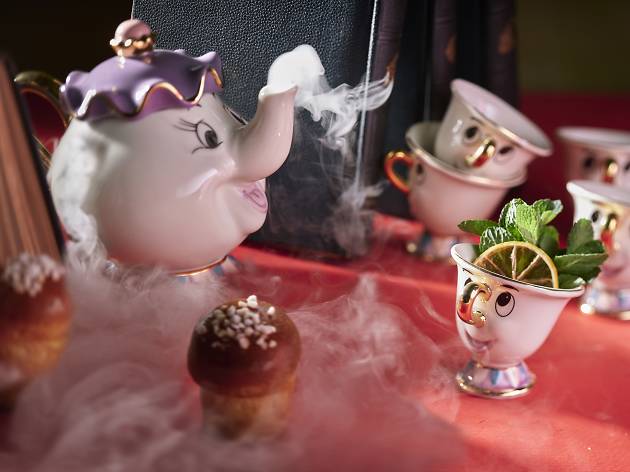 The new Fantastic in the old north of the city works on an entirely different level. “People are looking for something to talk about and remember, but also to eat well,” says Ariel Leizgold, owner of the 223 group (Bellboy, Hotel de Ville). Fantastic checks all the boxes that characterize the bars of this new type: divided into different zones that provide various entertainment experiences and a food menu created by esteemed Israeli chef Edith Fadida. 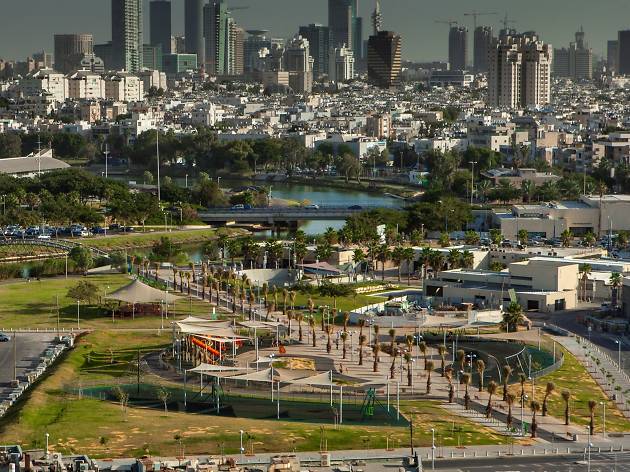 During its inception in 1932, Levant fair attracted six hundred thousand people, which was three times the population of the Jewish community in the country at that time. Unfortunately, during the second World War, it lost its glam and was neglected. However, in 2011, "Atarim" took the fair under its wing and began some much-needed rehabilitation, renewing the compound to a bustling cultural center for entertainment and commerce. Today, the compound is rife with designer boutiques, lifestyle shops, restaurants, cafés and even an amphitheatre for live performances. With plenty of shopping and activities, Levant Fair is back and better than ever. 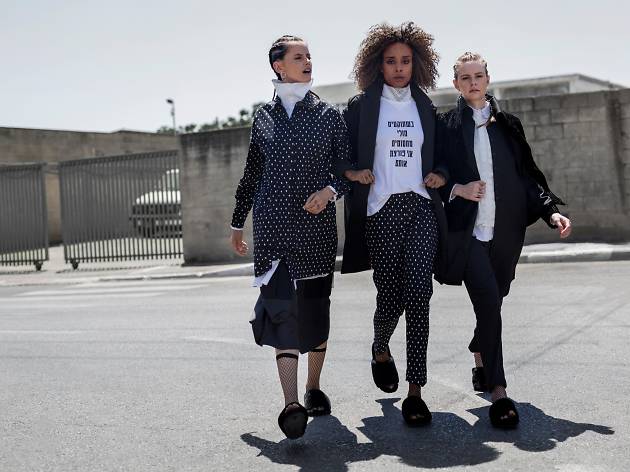 Comme il faut is comprised of a fashion house, women’s only spa, and chef's restaurant located at the Beit Banamal (Home in the Harbor) complex at Tel Aviv port, that offers a women's venue for culture and entertainment. Sybil Goldfiner founded the company together with Carole Godin 22 years ago, as a business by women for women. The company seeks to advance women in Israeli society by developing and cultivating feminist awareness. The approach that guides the company's activities is that a garment is not only a garment, but is also part of an entire gamut of political actions that are motivated by a cultural-critical worldview. 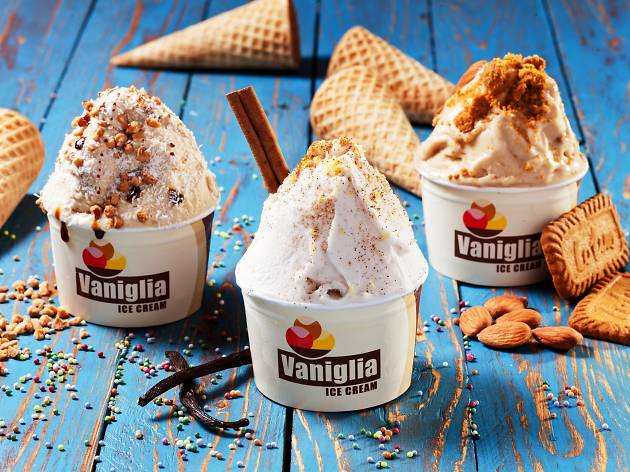 Vaniglia offers a variety of desserts, including ice cream, frozen yogurt, sorbet, vegan ice creams and Belgium waffles. With exciting flavours such as whiskey cream, 10 spices, chocolate orange, marshmallow, blood orange and pomegranate, Vaniglia has a taste for every mood. Vaniglia gathers inspiration and raw materials from around the world, in order to ensure they use the best there is to offer. What started out as a small venture has turned into a chain with many locations around Israel, making Vaniglia easy to enjoy no matter where your travels take you! 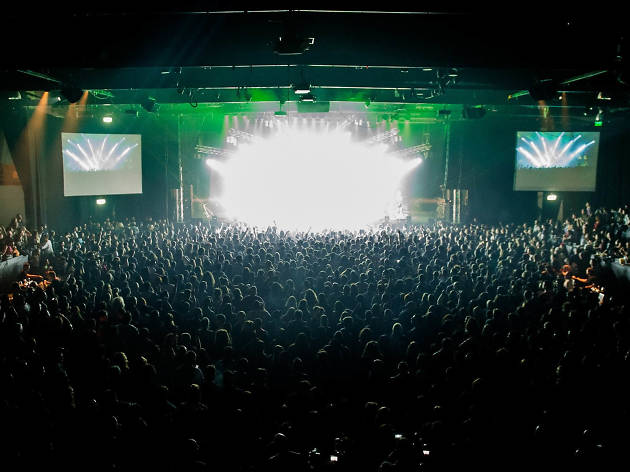 After years in the business and hundreds of performances by leading artists, Zeev Isaac had a vision. As one of the most prominent producers in Israel and internationally, he wanted to create a venue appropriate for all kinds of events, from cultural to private and business. Hangar 11 is the product of his dreams. With video projection and some of the most advanced sound and lighting systems in the Israel, the multi-disciplinary venue hosts a wealth of events year round. In addition, a well-trained staff provide meticulous service to create the perfect evening, no matter the occasion. 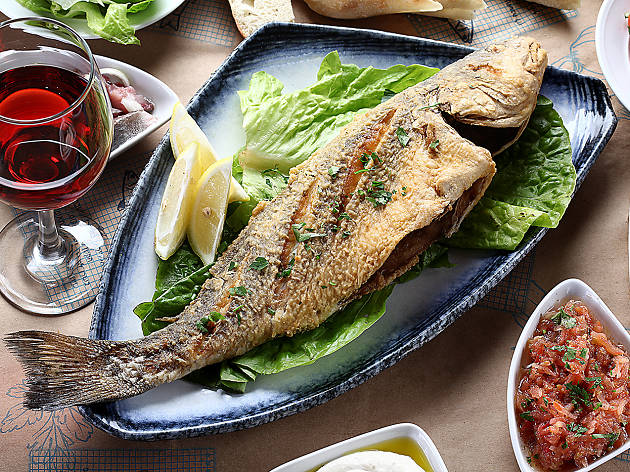 For over 20 years, Shtsupak’s central location on Ben Yehuda (a quick walk from the Namal), and its incredible selection of treasures from the sea have made this restaurant a perfect place for lunch or dinner. A variety of salads are set in front of you—and the refills keep on coming. This classic spot serves up things the simple way with excellent seafood cooked to perfection… and of course, endless salads to match. 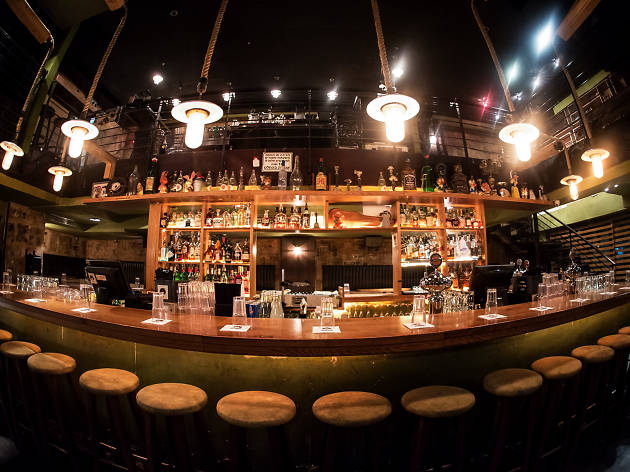 In the center of a young and cool neighborhood in north Tel Aviv is Rubi. A neighborhood spot where everyone knows everyone, and the atmosphere is relaxed and happy. Serving mostly students, this bar is full every night of the week. Playing a hip blend of Israeli and international music, guests keep dancing until the late hours of the night. Rubi serves delicious food in addition to their huge alcohol menu. The bar is also suited for hosting events, with two floors, a private room, small garden, and advanced DJ sound system. 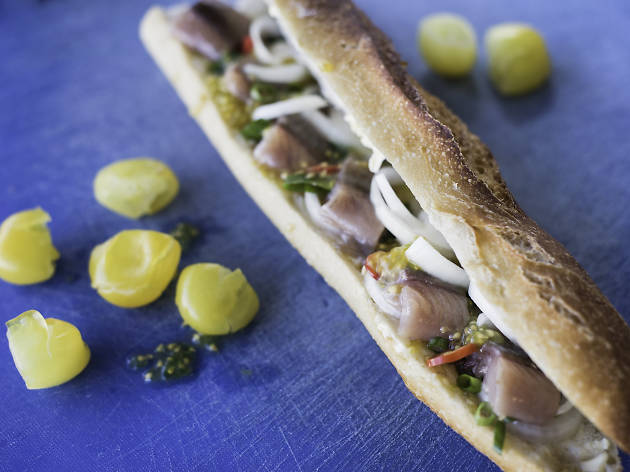 Located in Shuk HaNamal, the Sherry Herring sandwich kiosk shares views of the beautiful Tel Aviv port. Chef Sherry Hansky crafts delicious creations in front of your eyes using local ingredients. Perfectly seasoned, golden baguettes envelop fresh fish, juicy vegetables, cream and butter at this gourmet sandwich shop. This ready-to-go meal is quick and tasty, offerIng a fresh take on fast food and making it the ideal stop for a lunch break - plus, it's rIght next to a wine shop, makIng it easy to craft the perfect picnic using the delicacies at Sherry Herring. 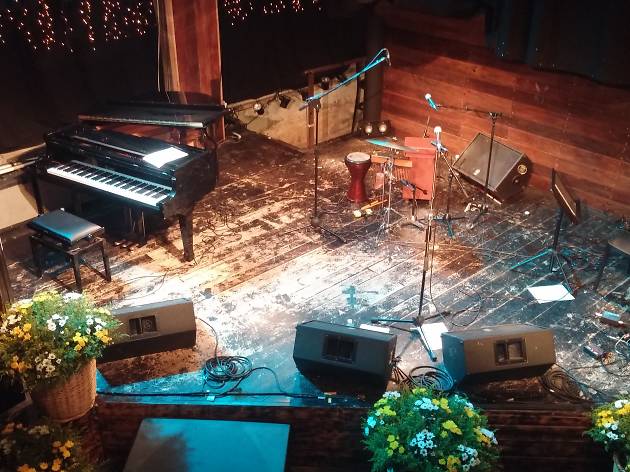 Hangar 11’s got challah bakes, business affairs, and commercial events; Hangar 13’s got jazz and blues; Hangar 22’s got Beit HaYotzer. This small and intimate performing arts space is a hopping venue for the hottest musicians in town. Putting on concerts by international and local musicians, Hangar 22 sends music blasting through the port and into the waves of the Mediterranean all night long. Buy your tickets to the next show, head down to the port, and wait in line for a unique musical experience. 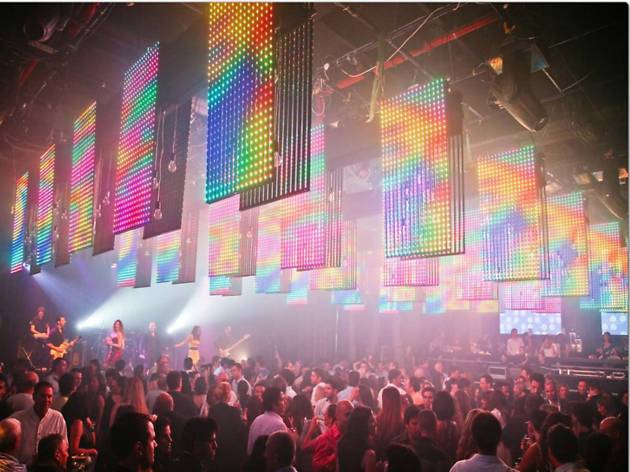 Get ready for bright lights, booming stereos, and 980 square meters of all-night fun. With the most advanced sound and lighting systems out there, Reading 3 is the perfect venue for local and international artists. On top of its three platforms, the space offers kosher catering and premium bar service fit for any occasion. Located in the bustling north Tel Aviv port, in just five short years, Reading 3 has risen to be a leading event space for private business events , launches and parties. Book your next gathering with the best in the industry for an experience you’ll be talking about for years. 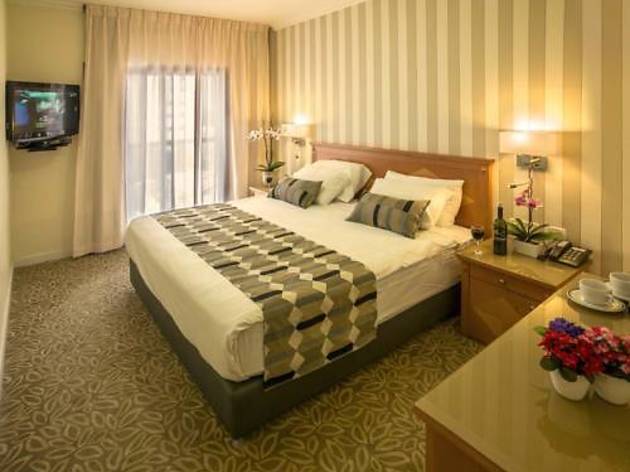 Armon Hayarkon is just a few steps from Metzitzim Beach and a 5-minute walk from Tel Aviv's Namal nightlife district. It offers free Wi-Fi and wired internet.Guest rooms at the Armon Hayarkon Hotel are modern and spacious. Each comes with air conditioning and cable TV. Breakfast is a varied buffet.The hotel is located on Tel Aviv's exclusive Hayarkon Street, and the old port is just a few metres away. The area is full of restaurants and shops. 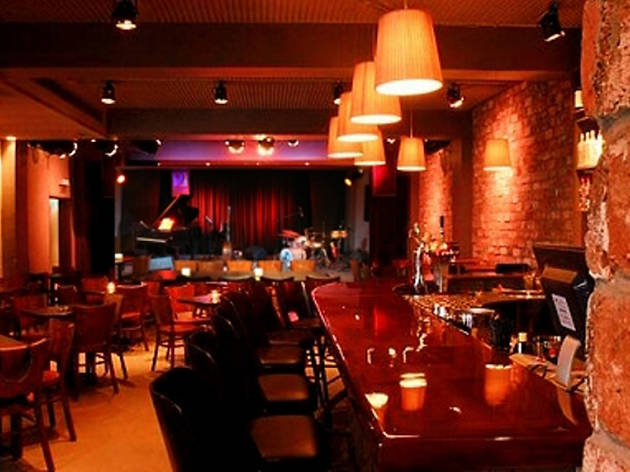 The same spot that reverberates with the exuberant tones of veteran jazz and blues artists like Lazer Lloyd, also resonates with the funk, ethno-jazz and hip-hop tapestry so many Tel Aviv musicians are known for. Grab a trumpet and toot your own horn because this little gem at the heart of Tel Aviv’s port is open seven days a week.