If you’re in search of a hearty salad or just a cup of coffee the solution lies in a café. We have complied a list of the best cafes in Istanbul. 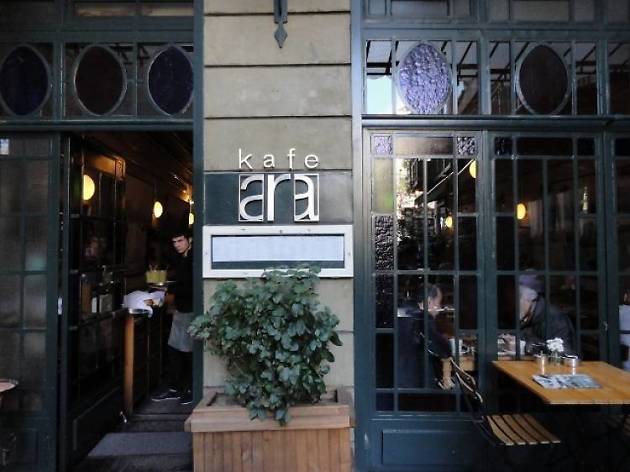 The interior of this Beyoğlu favourite is lined with awe-inspiring photographs taken by legendary Turkish-Armenian photographer Ara Güler, the café's owner and namesake. The menu and drinks are dependable if a bit overpriced, while both interior and exterior settings make for a great place to sit and enjoy the surrounding buzz of the area. 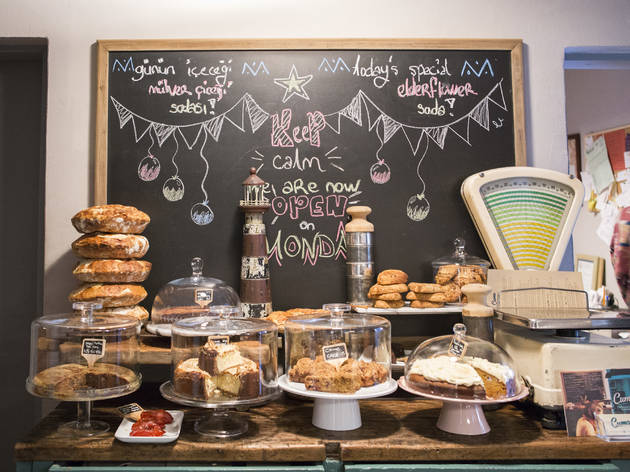 Cuma opened in the Çukurcuma neighborhood four months ago and is already a firm local favorite. Located just a hundred meters from author Orhan Pamuk’s Museum of Innocence and behind a line of antique shops, its breezy terrace is transporting, creating an almost tropical vibe. Up the narrow stairs in the century-old building, visitors will find a small house-restaurant, complete with entrance area, kitchen, living room, dining hall with antique decor, even toys on the shelves – all adding up to a very homey, vintage feel. Owner Banu Tiryakioğulları graduated from the Culinary Arts Academy in Maslak and previously worked as a chef at the much-acclaimed restaurant Changa. She says that once she saw the space that is now Cuma, she knew it had to be a restaurant. (The name comes from old French maps of Çukurcuma, on which the area was called Djouma.) Tiryakioğulları gets her ingredients as locally as possible – most come from the Feriköy organic market and the Kastamonu market in Kasımpaşa, while dairy and olive products make their way across the Marmara sea from Bandırma. As soon as we sit down, we are greeted with toasted bread and a mouthwatering pepper paste. Cuma’s menu is heavily focused on Turkish cuisine – the egg-tomato-and-pepper dish menemen, eggs with sucuk (spicy beef sausage), a cheese-and-fresh-herb omelet, and a variety of toasted sandwiches – but also offers other selections such as gazpacho and eggplant-tomato linguini. A lunch menu that changes daily feature 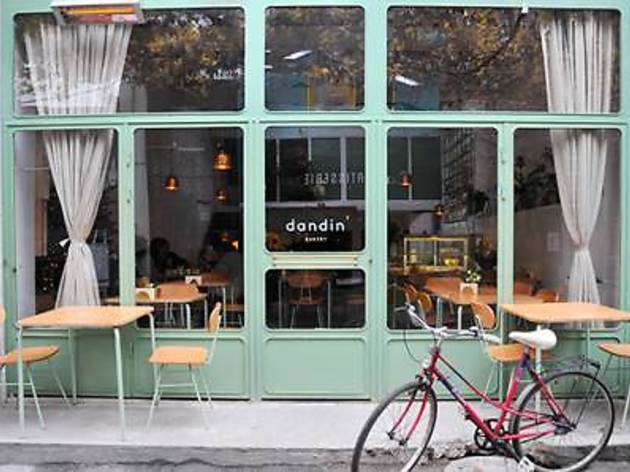 It’s been a few months since we started to hear the name Dandin just about everywhere and see it tagged regularly on social media. It seemed to have appeared overnight, but when we first went to visit, we came across a tiny note that informed us that Dandin Bakery was undergoing renovation. We thought too much attention might have exhausted the shop and started to await its reopening. Thankfully, Karaköy’s new sweet spot reopened with a slightly bigger space. Owners Esra Dandin and Egemen Senkardes wanted to ensure that the kitchen was spacious enough to embrace visitors as soon as they came in and offer them a show as the cakes, pastries and drinks are being prepared. The previously vacant top floor now accommodates five or six tables.     The breakfast menu offers teas, coffees and frappes as well as hard-to-find dishes such as avocado on toast with goat cheese and scrambled eggs (26 TL) or scones with blackberry or sour cream jam and blueberry cream. The bakery isn’t a stickler for rules, either, so there’s room for alterations to the breakfast menu. Yet Dandin’s tour de force is undoubtedly the cake and pastry buffet, where you’ll find tantalizing treats made fresh each day. Their reasonable prices (8-15 TL) make them a perfect option for indecisive carb-lovers. The refreshed and updated Dandin has once again become Karako¨y’s favorite. Give it a try. Erçag Akın 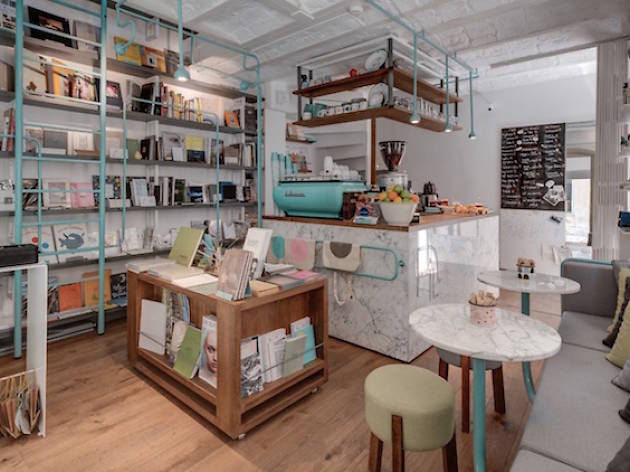 A haven for Istanbul's photography fanatics, FiLBooks boasts an extensive photo-book library and doubles as a cafe where workshops are organized. Standing out with its pastel colors and tranquil decorations, FiLBooks is one of Karaköy's quaintest spots, offering everything from journals and children’s books to independent presses and gift items. This bookshop also hosts ateliers, talks, round-tables, and interviews about art and photography. The legendary photographer Martin Parr was one of its many famous visitors in recent memory. The excitement of the team behind FiL, led by Cemre Yeşil who teaches contemporary photography at Bilgi University, is the main drive behind the bookshop's popularity. They know that an experienced barista isn’t what is going to distinguish them from the many other cafes in Karaköy, although they can certainly tick that box. 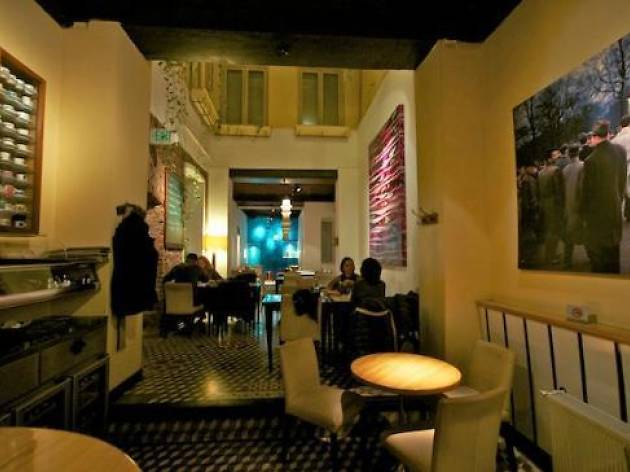 Hidden away on a side street descending away from the hustle and bustle of İstiklal Caddesi lies Şimdi, a cosy café, bar and restaurant that has weathered the storm and remained on its feet while a number of its neighbors closed down in the past few years. Its endurance is due in no small measure to its laid-back vibe, which makes it a great spot for an early morning coffee or after-work drinks. 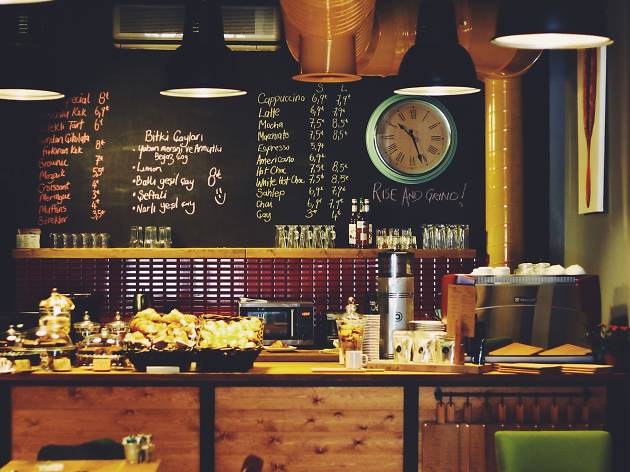 Their dessert menu and counter will take your breath away the moment you walk in. Take a look at the library at the entrance; you can leave the book you finished and head out with a new one. The apple crumble and date cake are competing with each other for best flavor. Don’t worry about which one to pick, order them both and enjoy. 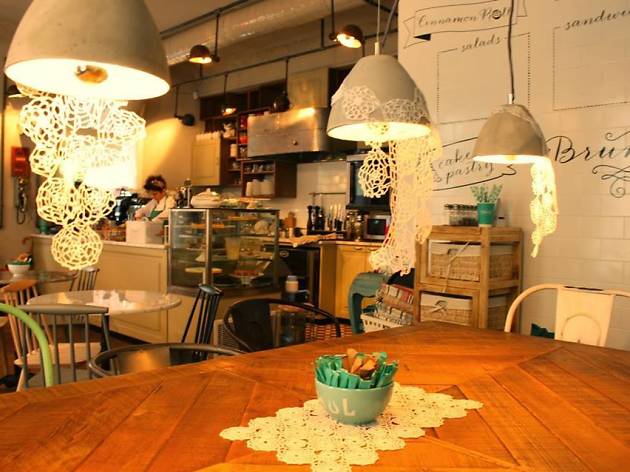 Reflecting the peaceful atmosphere of the French Passage, Mums Cafes has delicious homemade jams you shouldn’t leave Karaköy without trying. Whispers of the homemade milk jam roam the streets of Istanbul like a legend. The jams were created with those who might want to take it home in mind; they are sold in cute jars. The smoked salmon and asparagus is perfect for those who love original flavors and a great option with tea. Mum’s menu is simpler compared to others. The owners’ 15 years of experience in Sweden played a big role in creating the space; while adapting to the fast-paced lifestyle the decoration creates a more intimate atmosphere. The continuous presence of Yıldız Dural’s beloved mother in Mum’s makes this intimate touch permanent. Mums means “my mother”, and “flavor” in Swedish. 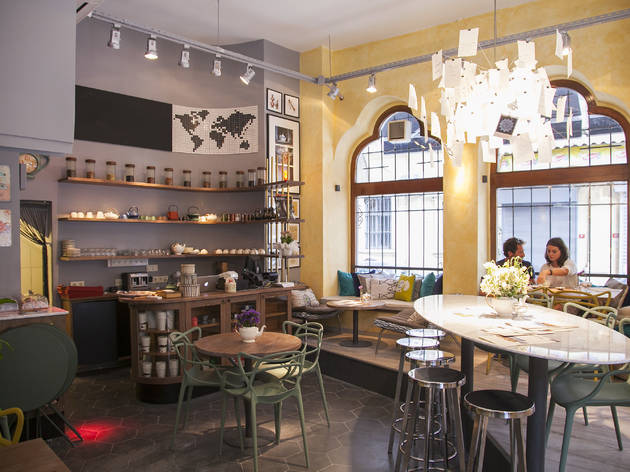 In addition to white, green, oolong, black, smoked, and fermented teas Dem features a varied menu including red tea and herbal teas; a menu catering to every palate. For those who find it hard to make a decision among the 60 teas available, partaking in the ‘tea smelling’ sessions can help. The tea varieties are brought to your table and after smelling them and getting information about them you can pick the one you like the most. The venue’s operator Eylül Görmüş created recipes specifically intended to complement the teas. For example the red plum sauce pear dessert with pişmaniye (a Turkish sweet in fine strands) goes perfectly with one of the tree types of Turkish teas. What is tea without breakfast? To accompany your tea Dem also offers a classic breakfast plate, simit and white cheese, menemen (eggs with vegetables) and börek varieties, as well as croque-madame and croque monsieur. 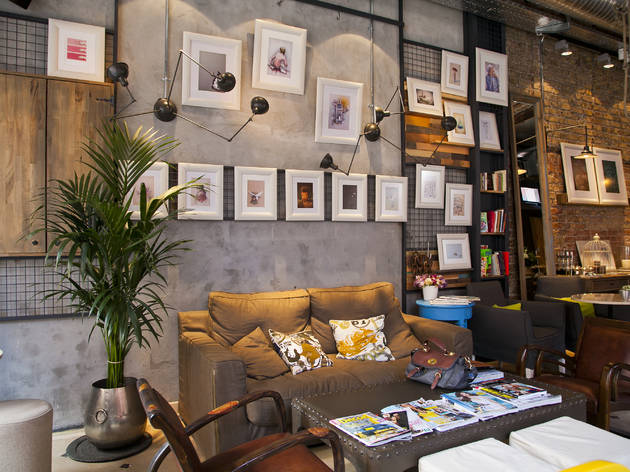 The small and open kitchen is like a living extension of the venue, producing flavors that reflect the venues spirit. The Albanian breakfast, eski kaşar (a type of old cheddar), feta cheese, and örgü peynir (a type of braided mozzarella) comes with the Albaian salad, dry meat with delicious yet discrete peppers unique to the Bosnian kitchen. Breakfast is served all day. All of the delicatessen products come from specific villages. Options flavored with dry meat are plenty, the dry meat cheese Balkan toast being one of them. In addition to breakfast and toasts the menu features salads, durums (wraps), pastas and desserts. The homemade lemonade is the perfect consistency of sweet and sour. 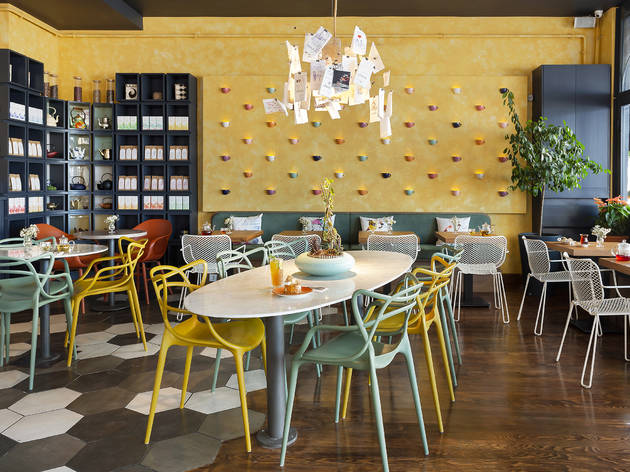 The newly revamped Dem Moda The Moda branch of Dem, a modern rendition of a traditional Turkish tea room, is at your disposal with an upgraded menu and interior. The worlds of art and tea are mingled together in this newly refurbished space, with works by Moda-native artists now gracing its walls. Exhibited works include installation artist Eda Soylu’s ‘Wallpaper’, created through the embedding of flowers in concrete. A piece made by Ebru Yalkın using tea bags is also on display at Dem. Although this spot is celebrated for their delicious cheesecakes, we’d also like to bring some of their new simit-centered plates to your attention. Dem’s simit skewers, simit bruschetta, and avocado and poached egged Smith Benedict are a few we recommend!