Consider Kansas City a cultural oasis on the plains and a beacon to all those within 100 miles—this is where you can find a good drink. Some of the finest bartenders, cocktail crafters, breweries and distillers that the midwest has to offer have all made KC home, producing some of the best sports bars, martini bars, beer bars and speakeasies in the Midwest. If you want to taste what Missouri has to offer, then check off the best bars in Kansas City from your bucket list. And while you're here, Kansas city has some pretty great restaurants and BBQ spots, too.

Drank somewhere on this list and loved it? Share it with the hashtag #TimeOutDrinkList. You can also find out more about how Time Out makes recommendations and reviews bars here.

This cocktail club—home to a two-story library of whiskeys which are only accessible by the sliding ladder—is like Beauty and the Beast but with more old-fashioneds. It's also an excellent starting point for your boozy KC adventure. Just be prepared for a small wait once you order; the staff here takes meticulous care to prep each drink as if you were a competition judge and they wanted first place.

This speakeasy is only accessible via a hidden alley entrance, and you'll definitley need a reservation ahead of time. Once you enter the dark basement, you'll be treated to a Prohibition-era experience with a range of cocktails from smoky to fruity and everythng in between. Keep your phone off to maintain the mood, but you'll need your flashlight temporarily, otherwise you'll never be able to read the menu.

First opened directly after the repeal of Prohibition in 1935, The Ship was a place where politicians, gamblers, and all classes in-between could mingle freely. In the 1990s, the bar was dismantled, removing the decorations made from an actual wooden ship, but in the 2000s, a local team scoured the city to recover the lost elements, and re-opened the bar with much of its original glory. The drinks are cheap, the food portions are threatening, and it plays double duty as an intimate concert venue.

A gold ceiling, a dark wooden bar, and a candlelit space are what you'll find in this iconic KC jazz club. There's no cover and no reason not to pop in for an hour ... or five. There's a comfortable, quiet tone, which offers a nice respite from the rowdier entries on this list. The owner's motto is "Stiff drinks, good jazz, no homicides.” What could be more inviting?

Read more
Advertising
The name makes it sound like this is the diviest dive on the list, but The Worm is anything but. The tequila bar is host to the best infusions in the city, shots that cost anywhere from one dollar into the hundreds, and some of the city's best Mexican food. Consider visiting during brunch, it's a fabulous way to lay the foundation for a lost weekend.
Read more

Directly next door to The Worm, Hi-Dive offers excellent locals, stiff drinks and a brand of Midwestern grunge you might be looking for. Hi-Dive is as laid back as bars come. There's a canned beer machine that includes a mystery slot which dispenses some of the oddest beverages. Feel free to roll the dice on that.

Nationally-recognized Monarch walks the fine line between being fancy and still accessible. It's the kind of place where a semi-formal dress code is enforced and men are required to remove their hats, but that doesn't stop people from arriving in their Sunday best to have a drink or two. Don't order your usual; Insted ask the bartender to surprise you with a concoction using their selection of locally produced liquors. You might just find your new favorite to remember the city by.

One of the finest distilleries in the city is also a must-stop food and dining destination. Every cocktail produced Tom's signature spirits produced in the machines directly behind you. There are a couple of different experiences, from a sampling flight at the bar to a high-end dining experience in the ballroom. If you do not sample their gin, you have not successfully completed your Kansas City trip.

A consistent winner of local 'Best Bar' competitions, Bier Station is an all around good time. Everything a beer snob could want is available, but the vibe is chill and welcoming. The beers are all tagged and explained so you can make an informed decisions, and there's an entire refrigerated section—you know, just in case you want to grab a six-pack to go.

Brews on tap and unlimited lives on a rotating set of more than 40 arcade games? Yes, please. If you want to relive your youth and fight your way through The Simpsons or Ninja Turtles with your pals (this time with booze involved) this is your spot. Tapcade offers unlimited credits, so it's okay if you're not as sharp as you once were.

With a maximum capacity of around 20 guests, you might have to wait to see the inside of this cozy bar, but it's worth it. Noise is kept to an absolute minimum here, so instead of ordering at the bar, a traveling bar cart brings finished drinks to your table (because they won't use the shaker in the room—for sound purposes, of course). With 12 seasonal rotating cocktails and a specialized ice machine, Swordfish Tom's is a must-visit when in KC.

You'll find this solid sports bar at the base of a gigantic red radio tower that pierces the KC skyline. (So if you wind up lost, you'll be able to find your way back to your party.) The real draw, though, is that you've found yourself in Martini Corner. This small literal corner off the beaten path has a set of five excellent bars for the plundering including Ollie's Local across the street.

Need a reason to visit? 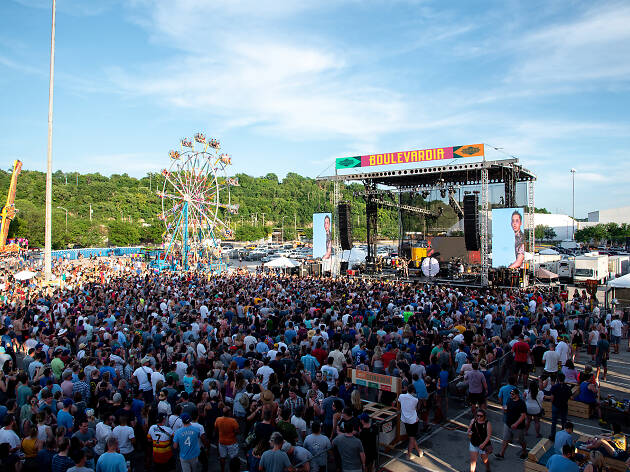 Every Kansas City events calendar is full of massive parades as well as cultural celebrations and so many food fests.