Kyary Pamyu Pamyu is the pin-up girl, high priestess and Easter Bunny of kawaii. This curious and uniquely Japanese concept literally means ‘cute’ or ‘adorable’, and in practice it translates as a cartoony riot of prismatic colours, anthropomorphised animals, peculiar dressing up and gurning. Think Katy Perry and her dancing sharks turned up to 11.

Already a global internet star thanks to her bizarre videos, album covers and unmistakably kawaii look, 22-year-old model-turned-pop star Kyary looks set to become the next musician from the Far East to break big in the West. As she prepares to head to London to play an actual gig at the Roundhouse, she tells Time Out Tokyo about her love of Japanese tradition and western pop idols.

You're known for your outlandish costumes. Did you enjoy the photoshoot for your Time Out Tokyo cover?
‘I've done Japanese-themed shoots before, where I wore kimono or yukata. But this was my first time doing something that was, I guess, masculine. It's kind of cool and innovative.’

What do you wear on your day off?
‘I really like clothes, but I get tired of wearing bright, pop-style clothes, so on my days off I often wear darker colours: black dresses or more sporty looks. It's a little different from the public image of Kyary Pamyu Pamyu.’

You're also famous for your poses and facial expressions.
‘Sometimes I strike a cute pose when I'm wearing a cute outfit, but I also pull funny or mischievous faces, to show off my personality. I don't always know if those [shots] will get used, though!’

Do you find that Western media has clichéd ideas about Japanese culture?
‘I get asked a lot of strange questions during interviews. In terms of fashion, they always ask me about designers, which is something that hardly ever comes up in Japan.’

What do you personally think is cool about Japan?
‘I think traditional Japanese culture in cool. For today's shoot, i was shown pictures of dolls from Children's Day [Kodomo no Hi, a Japanese festival held on May 5] as inspiration, and I thought those gallant young boys in dignified poses were really beautiful. And there's the Girls' Festival [Hinamatsuri] too. There are parts of tradition that have elements of fashion and I want to incorporate these things into my outfits. I want my identity to still be Kyary Pamyu Pamyu, while also mixing in some traditional culture.’

‘I like dark stories: heartless relationships, stalkers, that kind of thing’

You’re playing the Roundhouse in October 2015. You've played at Shepherd’s Bush Empire and Brixton Academy. What was that like?
‘It’s absolutely nothing like in Japan. I was surprised to see that a lot of the London fans had long hair and punk T-shirts. It was interesting to realise how many of them weren't the type of people who are into "cute" things.’

Your videos also contain some darker imagery.
‘My apartment has a lot of pink, cute things in it, but the manga I have on my shelves are things like “Himizu” and “Ushijima the Loan Shark”. I like dark stories. It’s the same for movies; I like things with heartless relationships, stalkers, that kind of thing. I try to put some of that darkness into my music videos and concerts.’

Do you have a pre-show ritual?
‘I practise greetings in each country’s language. Asian languages are especially hard, because if you change the intonation even a little, it can change the meaning. I’m not very good at English either, so I want to work on that.’

Which Western musicians do you like?
‘I’ve always been a huge fan of Katy Perry. Lately, I’ve been listening to a lot of Meghan Trainor. I like how the tunes have a retro feel. Her music videos are super cute too.’

Which Japanese stars have influenced you?
‘Kyoko Koizumi [a star in the ’80s and ’90s] is super enchanting. I met her once and she mentioned that she got sick of how idols had to be cute and fluffy all the time, so she chopped her hair into a boyish look. I like the idea that something that starts out from your frustration can turn into a success.’

How will your look develop, do you think?
‘I’ll be 23 soon, and up to now most of my work has focused on the cute aspect of things. I want to explore something more edgy. I definitely want to develop a new side.’ 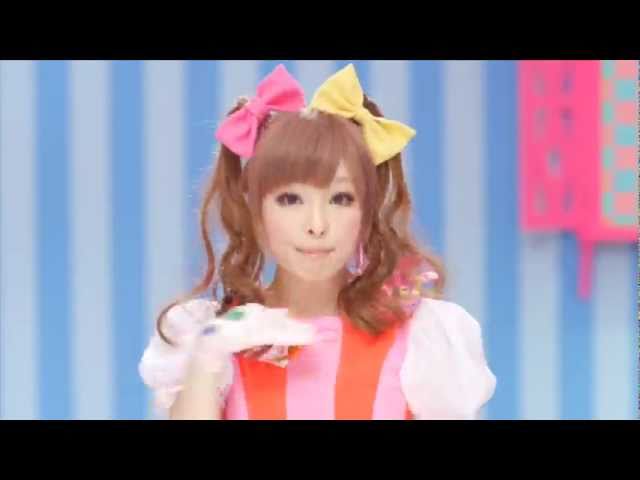