Madrid has celebrated Halloween, and Christmas with Santa Claus, so why not join in on the glorious feast that is American Thanksgiving, on Thursday, November 24? 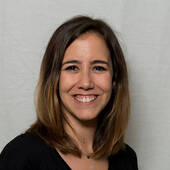 Traditionally in Spain the locals dress up in costumes for Carnival in February, but in recent years they've joined in on Halloween in October as well. And whereas Kings' Day on January 6 has always been bigger than Christmas, lately Santa Claus has made nearly as many appearances as Balthasar, Melchior and Gaspar. So, what with the sales on for the imported Black Friday, why not celebrate American Thanksgiving the day before, on the fourth Thursday of November, which this year is the 24th. Whether you're an American in Madrid or you just really like turkey with all the trimmings, here are some spots that are cooking up special meals to make you feel right at home and fill you to the brim. 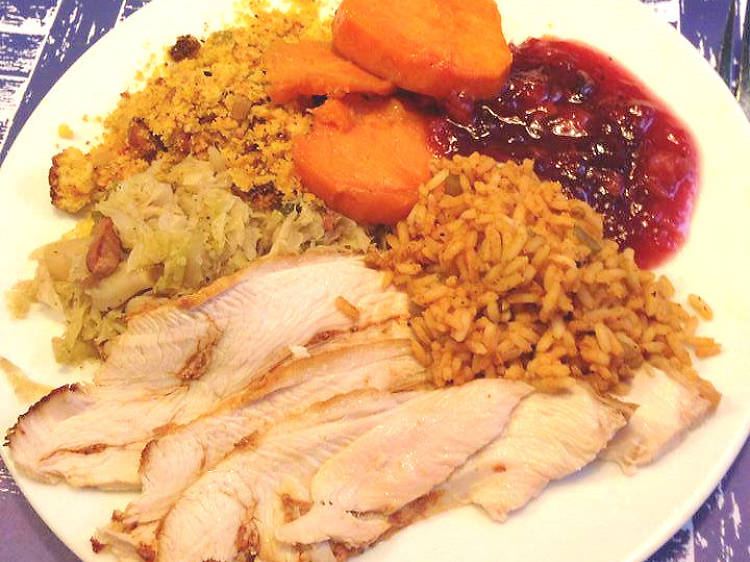 Madrid's most famous New Orleans Creole restaurant couldn't miss out on such a special celebration. So they've created a delicious set menu that features a starter (you choose between cream of artichoke soup with parmesan or leafy green salad with apple); a main of fried turkey, rice, cornbread, baked sweet potatoes, coleslaw and cranberry sauce; and you choose your dessert from between apple pie or sweet potato pie with pecans. The menu includes two drinks and coffee or herbal tea, and the price varies, depending on if you go at midday (€32) or for dinner (€37), which is served in two shifts, at 9pm and at 10.30pm. 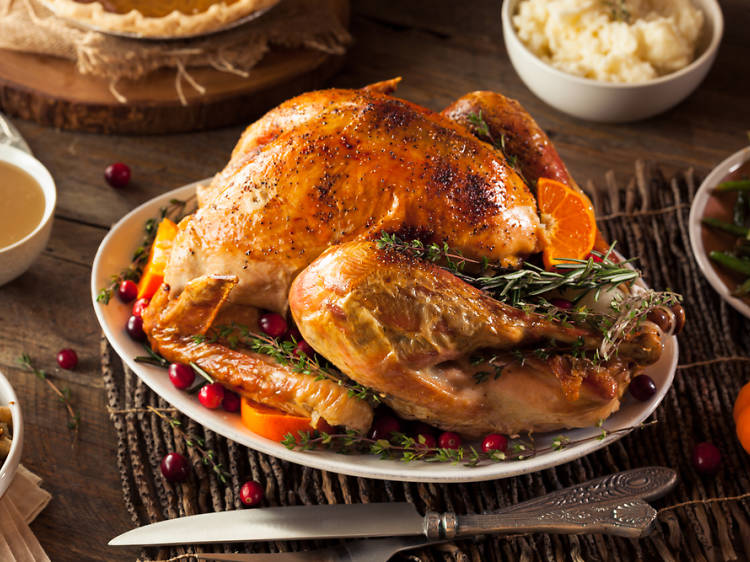 A central Madrid hotel on Gran Vía also celebrates Thanksgiving with a menu created specially for the occasion and served in the restaurant on the 14th floor. For €35 you'll gobble down a delicious cream of clam soup, a traditional grilled turkey with gravy stuffed New England style with all the trimmings, including coleslaw, mashed potatoes, turnips, sautéed carrots, steamed peas, glazed onions, Brussels sprouts and cranberry sauce. If you can still fit more in, which, after all, is the goal of Thanksgiving, there's pumpkin pie for dessert, served with fresh whipped cream. 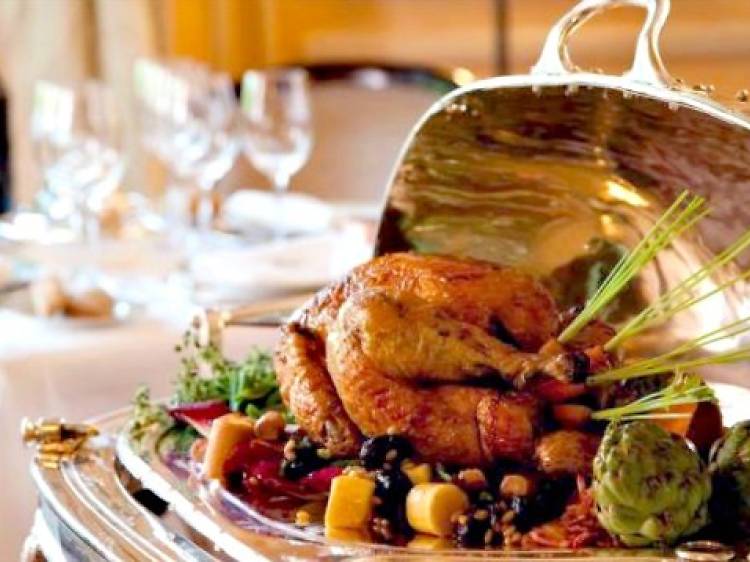 If you're looking for something a bit more exclusive, we recommend the menu that the luxurious Hotel Ritz is serving up. You'll dine on pumpkin soup with aniseed and fromage frais; stuffed grilled turkey with mashed sweet potatoes and bacon sauce; and for dessert an apple cake with vanilla ice cream, as well as coffee and herbal teas. A fancy feast for €75 per person (drinks not included).
Read more
Check prices 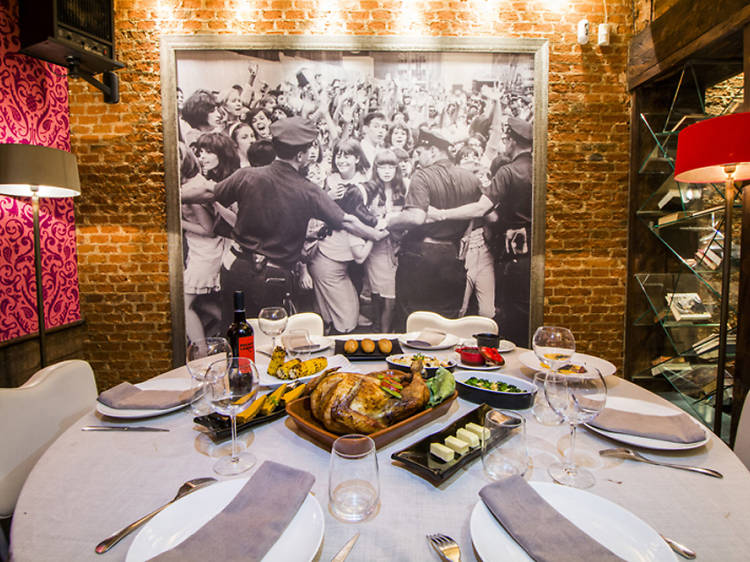 Making a change from the set-menu format is Pecado Carnal, where they're putting out a more original type of spread for Thanksgiving Day: an all-you-can eat buffet. Before you get too carried away, you should know that for your €39.95 you have an open bar for drinks in addition to the buffet, but you have a maximum of two hours to stuff yourself, and you can choose from one of the two seatings, either at 8.30pm or 10.30pm. You'll find dishes such as coleslaw, courgette (zucchini) soup with lobster, turkey stuffed with foie, broccoli and cranberries with mashed potatoes and a delicious gravy (attention: you can order a whole turkey for your group and carve it yourselves if you like!), and for dessert you'll have their spectacular pumpkin cheesecake. Did we mention that Pecado Carnal translates to 'carnal sin'? 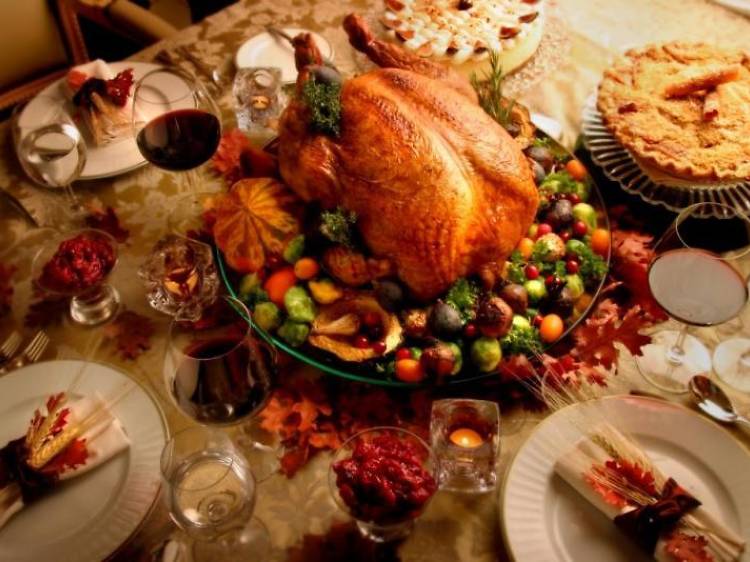 At the aptly named Cornucopia restaurant they've been celebrating Thanksgiving for more than 20 years with a traditional American menu. Their offer includes a selection of appetisers and home-made bread with extra virgin olive oil; a starter, which you choose, either New England clam chowder or a green salad with crunchy seaweed and sesame oil; a main dish of grilled turkey cooked with sage and white wine, filled with fine herbs stuffing and accompanied by creamy mashed potatoes; for dessert you can dig in to either pumpkin or apple pie, and digest it all with a cup of coffee or tea. The meal costs €46 per person, and includes white or red wine. 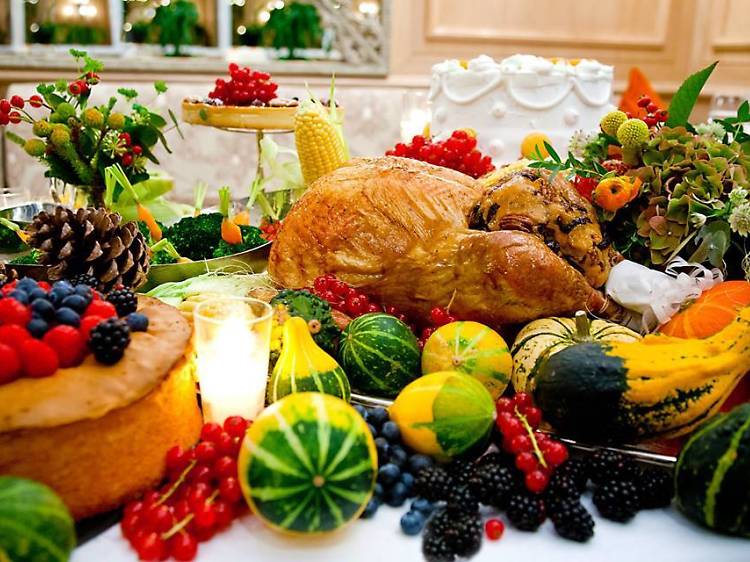 The InterContinental also opts for an all-you-can eat buffet, where starters include potato salad with tricolour peppers; tender leafy greens and wild berries; chicken salad with apple and celery; prawn cocktail; mushroom and sesame salad; green bean salad with vinaigrette; coleslaw; and creamy hot soups such as corn or pumpkin. And of course you'll be filling your plate with grilled turkey with or without stuffing, accompanied by mashed potatoes and/or mashed sweet potatoes, sweetcorn, carrot salad, broccoli and gravy. For dessert there's apple, pecan and pumpkin pie. All this for €55 starting at 8.30pm in the hotel restaurant El Jardín.
Read more
Check prices
Advertising 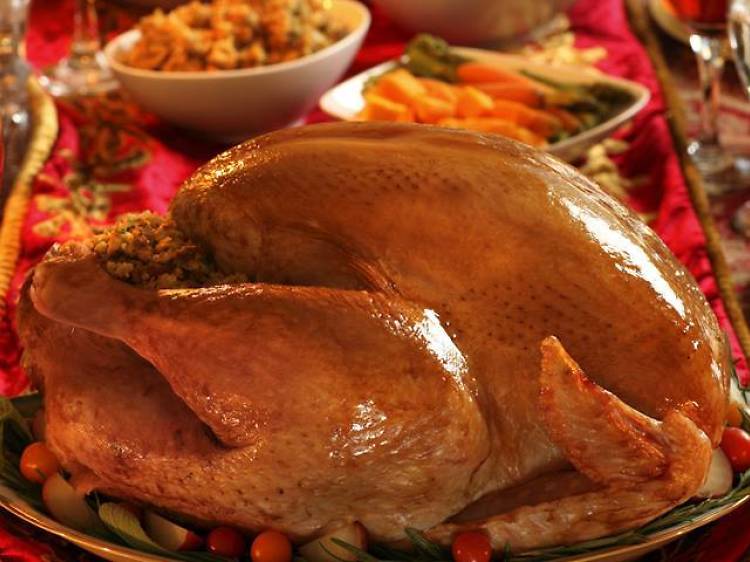 A restaurant that specialises in American dining like Roll Madrid is of course going to throw its hat into the Thanksgiving festivities. The menu they've created includes pumpkin soup, appetisers and salad followed by the essential turkey stuffed with cranberry sauce and with trimmings, accompanied by mashed potatoes, creamed corn, Brussels sprouts, sweet potatoes and carrots cooked with honey. Dessert in this charming spot in the Conde Duque neighbourhood is a selection of cakes that will satisfy even the sweetest tooth. To enjoy the feast, you'll pay €35 per person.
Read more 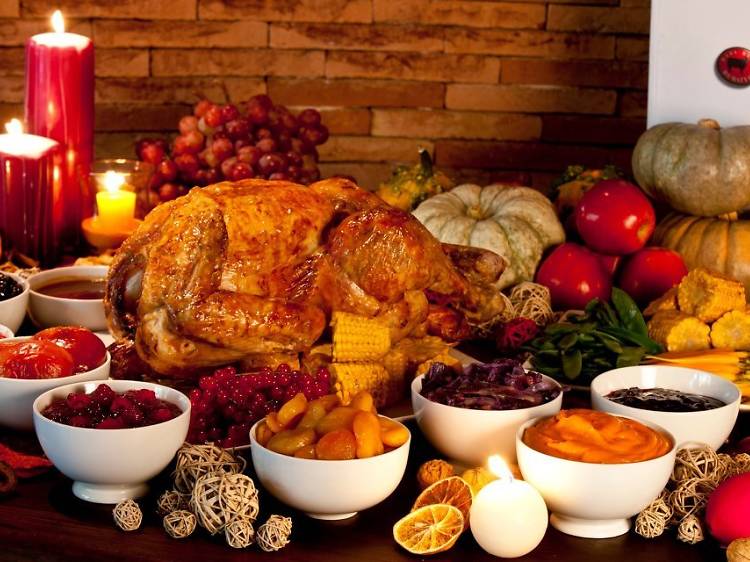 They've been giving thanks at Rubaiyat ever November for years, and with deserved success. The menu is designed by executive chef Carlos Valentí, and it couldn't be more well-rounded. For your starters you can try a selection of cold and hot appetisers and an array of freshly baked breads, followed by a cream of corn and vanilla soup. After that it's the turkey accompanied by cranberry sauce, grilled corn, wild berry conserve, mashed sweet potatoes and baked apple. Topping it all off is pumpkin pie with cinnamon and coffee or herbal teas as well as petit fours. The €55 menu includes a Ribera del Duero red wine, water and soft drinks.
Read more
Advertising 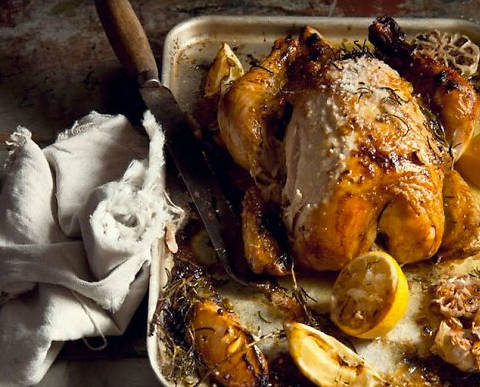 Here's a complete yet still affordable Thanksgiving dinner that one of our favourite Malasaña restaurants cooks up every November. For €25, you start off with barbecued chicken wings that lead nicely into the stuffed turkey served with cranberry sauce and accompanied by sides of baby glazed carrots, green beans sautéed with bacon, mashed potatoes, grilled yams and baby corn cobs. Dessert is their rich apple pie with vanilla ice cream. Note that drinks are not included in the price. Book early, as Clarita usually fills up for Thanksgiving.
Read more
Show more 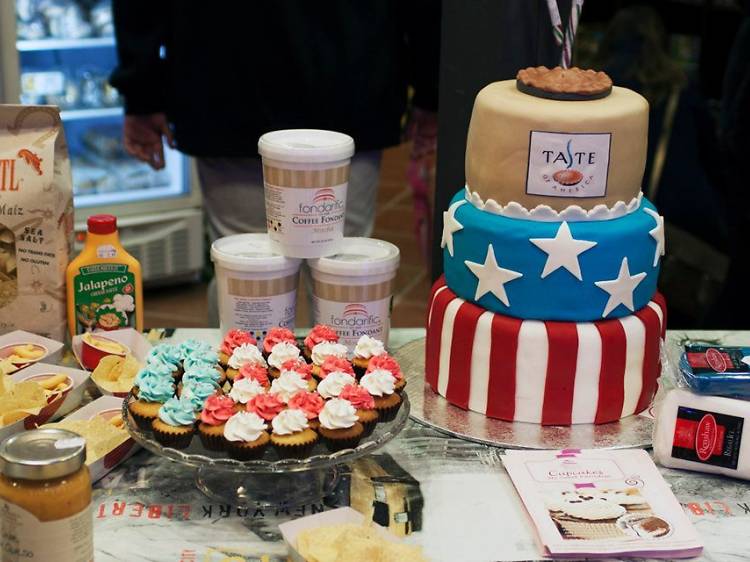 Whether you're an American living in or passing through Madrid or you're a fan of American foods, you'll revel in what Taste of America has to offer. It was the first shop in Madrid to specialise in American products, having opened more than 20 years ago, and since then it hasn't stopped growing. So much so that these days you can find more than 2,000 products from the USA including brands such as Pepperidge Farm, Celestial Seasonings, Newman’s Own, The Jelly Bean Factory, Little Miracles, Tyrrell’s Potato Chips and Mississippi Belle, among so very many more. It's also a great place to go when you're looking for ingredients that are hard to find in local supermarkets, perfect for celebrating special occasions like the Fourth of July or Thanksgiving. You'll find various locations throughout Madrid.
Read more
Show more