May 2019: This feature's hot off the grill with two sizzling new additions! We may have lost Swine in Coral Gables last year, but two exciting new spots are keeping Miami's BBQ scene fresh. For inventive takes on grill fare, hit up Michael Beltran's Leña at Time Out Market Miami, which is doling out expert wood-fired meat and vegetables. In Aventura, Chef Michael Mina and cookbok author Ayesha Curry are putting new spins on classic techniques with an expansive menu highlighting surprising BBQ fare like seafood and veggies. You'll want to make some finger-lickin' trips to both this month.

Locals are known to travel far distances in their pursuit of the best BBQ in Miami. It’s not just spots in downtown Miami and Coral Gables that get Miamians excited about grilled and smoked meats. They'll make pilgrimages to far-away suburbs and farm country to get their hands on tender ribs and flaky cornbread, plus all sorts of finger-lickin’ sauces—the kind you’re tempted to smuggle home and drizzle on everything from steaks to ice cream to a drippy plate of nachos from a Mexican restaurant in Miami.

Where to find the best BBQ in Miami 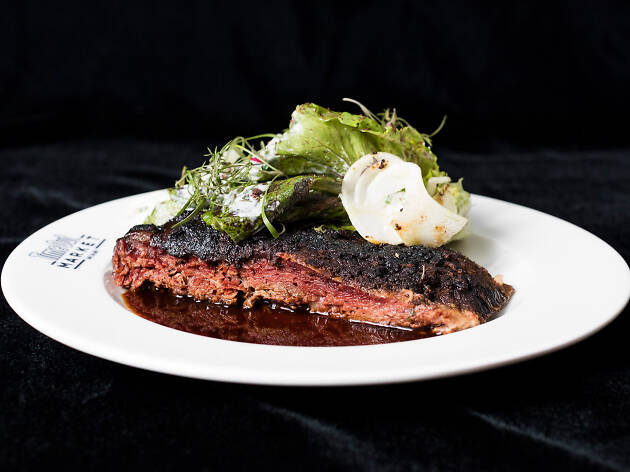 What is it? Chef Michael Beltran’s grill-centric concept at Time Out Market Miami doles out all sorts of charred, smoked and wood-fired dishes—from oysters to beets to brisket.

Why go? There’s no limit to the things being grilled at Leña but our favorite has to be the pastrami-style brisket, which was on the original menu at sister restaurant Ariete when it opened three years ago. It’s tender, packed with flavor and surprisingly light (for brisket that is). It’s paired with a delightful seasonal side salad to balance out the richness. 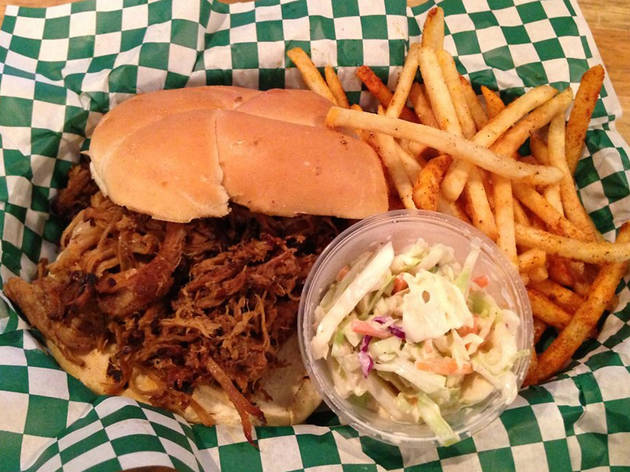 What is it? Tucked away between skyscrapers and convenience stores is one of the best pulled-pork sandwiches you’ll sick your teeth into. Picnic seating and a stellar craft-beer menu add to its misplaced charm.

Why go? Sparky’s fills you up with inexpensive but generous portions of Southern barbecue staples, from baked beans and macaroni and cheese to brisket and BBQ chicken. The desserts are made in-house and the banana pudding is truly to-die-for. 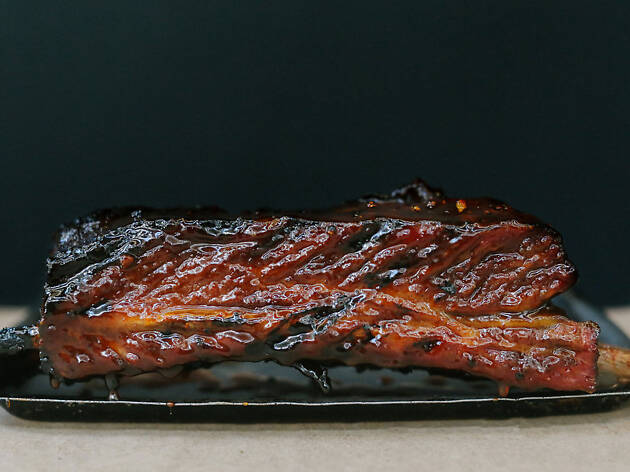 What is it? Chef Michael Mina and notable cookbook author Ayesha Curry partner on this Aventura restaurant serving a global menu of BBQ classics.

Why go? This place will change your outlook on barbecue food. If you’re a fan of grilled dishes, you’ll find more to enjoy. If you thought BBQ wasn’t for you, International Smoke will make you think differently about the popular cooking style. Do try one of the smokey cocktails on the menu—they’re Intagrammable as well as tasty. 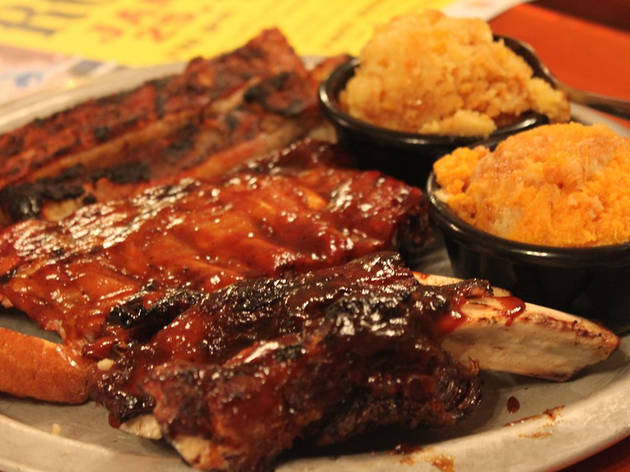 What is it? The place for super-size everything: brisket, benches and beverages.

Why go? Shiver’s authentic hickory-smoked meats—from baby back ribs and pork spare ribs to chicken and beef brisket—which it’s been making the exact same way for more than 60 years. It’s a hike from downtown Miami (about 40 minutes south) but so, so worth it. 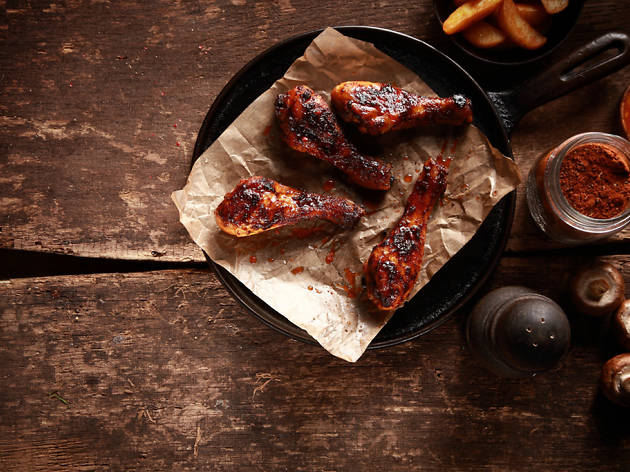 What is it? A no-frills BBQ joint where the rubs and sauces are all made in-house and from scratch.

Why go? While the smoked meats are stellar, we’re in it for the fixin’s like mac and cheese, baked beans and collard greens. Don’t expect to pay more $15 for a truly satisfying meal. 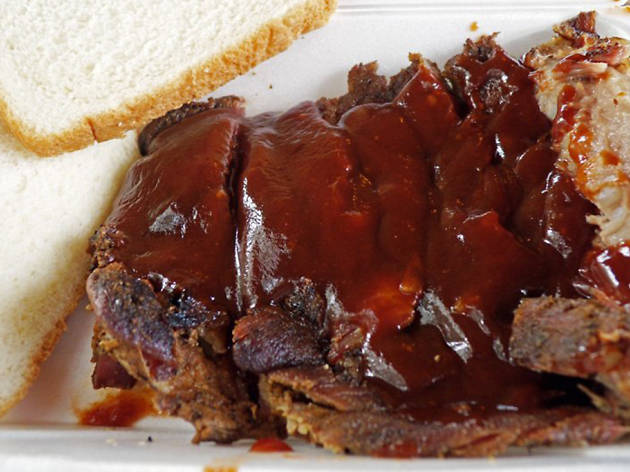 What is it? A charming misnomer of a coffee shop that’s actually a barbecue pick-up window adjacent to a church.

Why go? This unlikely barbecue joint serves some of the juiciest pork ribs and chicken in town. Expect long lines following Sunday service, when you’d sooner get run over by a car (it’s practically a roadside joint) than successfully bypass the throngs of hungry, church-going ladies waiting to order. 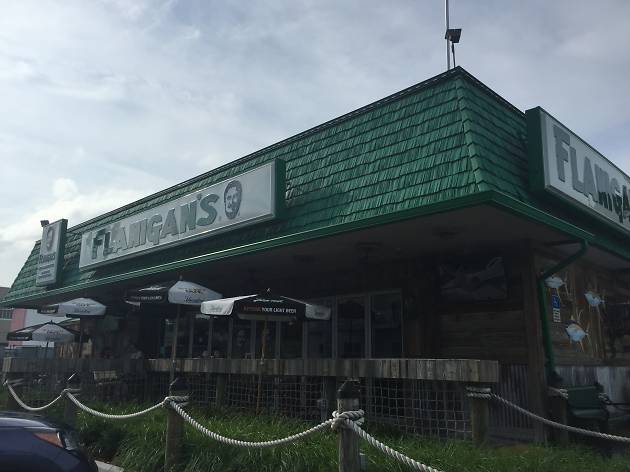 What is it? This South-Florida–based chain of seafood and barbecue restaurants serves up good times and enormous racks of ribs in equal measure.

Why go? The Joe’s Meal Deal is the adult version of a Happy Meal you didn’t know you needed. It includes a full rack of Flanigan’s signature baby back ribs served with a side, a salad, a roll and an ice-cold beer for just $20.99—and it will put you straight to sleep. 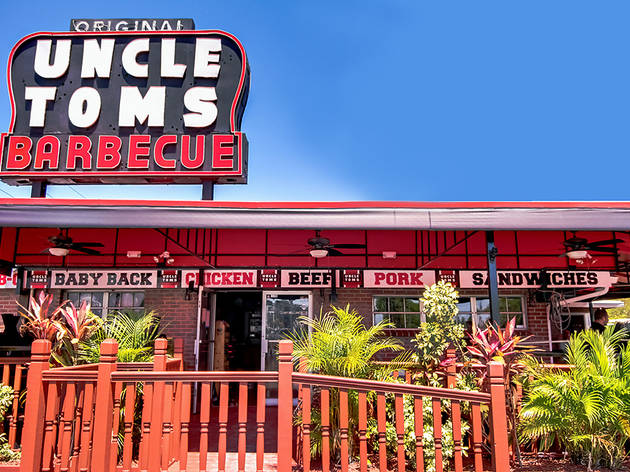 What is it? A Coral Gables landmark for more than 65 years, Uncle Tom’s Barbecue underwent a massive image and menu overhaul—and expanded to include several new outposts.

Why go? The original location on Tamiami Trail still serves the classics families have come to love, such as brisket, baby back ribs and buttery breads, plus additions like the crispy corn nuggets. 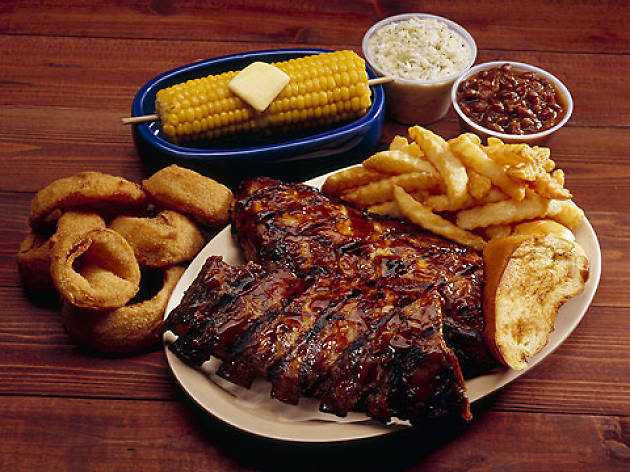 What is it? This friendly barbecue pit is the last vestige of pre-developed, pre-trendy Miami.

Why go? For a chill vibe and finger-lickin’ ’cue. Barbecued chicken and ribs are served in a casual atmosphere, where eating with your hands in strongly encouraged.

Check out more of Miami's best spots for carnivores 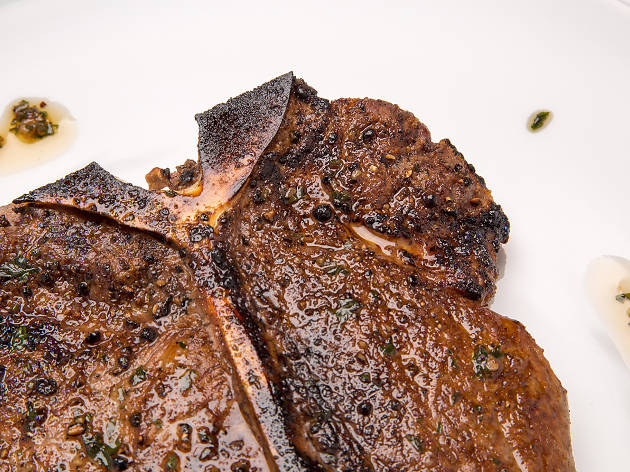 Feast on juicy slabs of beef served at the best steakhouses in Miami, from South Beach to Coral Gables