Miami Slice lives up to the hype, but beware of pizza purgatory.

Since its arrival as an order-online-only pop-up during the pandemic, Miami Slice has been the hottest debutante at the ball, written up often as the best new pizza spot in Miami and Instagrammed by those who have become famous for eating pizza. But Miami Slice also brings up a fundamental question: What would you put up with for something delicious?

You might think the chaotic setup at Miami Slice is totally worth it if you’re the type who chased Ted’s Burgers and LuchaDough donuts to various locations around town, or dealt with the often-difficult ordering process in the early days of Old Greg’s, or drove to a North Miami front yard for ribs from the Drinking Pig. There are also those of you who would rather just walk into Eleventh Street or Stanzione 87 and order an incredible pizza without a hint of drama. In that case, Miami Slice may not be your friend.

If the Miami Slice website and ordering system and Instagram page left you confused, apparently you’re not alone. Here’s how it works: Their massive, New York-style pizzas become available a few days in advance and without warning. If you see that the pies say “Sold Out” (as they almost always do), you’ve missed your chance. There’s also a dine-in option for slices that might make ordering easier. But not always.

When we arrived 15 minutes before the 5pm opening, only a couple of small groups were already waiting. Looking unsure of ourselves, we all collected on park benches outside for a while before someone came out to take our names down on a clipboard. Eventually, as more people arrive, we were herded into two groups, with those who had put in takeout orders getting sent to a long line in front of the taco restaurant next door—a line that ended up being something of pizza purgatory. (More on that later.)

A few minutes after five, a few of us who had arrived for dine-in was led into a shoebox of a space, with a massive green stone bar curving through the center of it providing most of the seating. Try to snag one of those bar stools if you can, as the couple seated along the wall behind us tried in vain to flag someone down. In those first moments after opening, the vibe at Miami Slice could only be described as crowded and chaotic.

While we’d read online about waits of an hour or more for dine-in pizzas, our slices arrived quickly, the Leeks on Bacon first. It was quite simply an unimpeachable slice. The garlic confit cream sauce provided an earthy richness, the bacon a smokiness and crunchy texture, the leeks an oniony bite, the crust a perfect example of charred leopard spots on the bottom holding up firm, the edges both fluffy and crisp. It served as something of a dream appetizer to the hit-or-miss second round.

Having ordered all five of the slices on the menu, the final four arrived at the same time, three spread out on a cutting board and one extra getting its own plate. Compared to the first slice, these had spent far longer getting reheated, the crust now a dark brown and charred mostly black on top. The crackly crust flaked away as we tried to hold it and, when we bit into it, crumbled like boxed matzo. Ours wasn’t alone; all the slices and whole pies we saw coming out while we were there had a charcoal-colored ring along the top, not just spots of black but a steady circle of deep burn on top of the crust.

While disappointingly overcooked, our slices were topped with ingredients that generally made clear why this place has gotten so much attention: a creamy mushroom perfumed with pungent truffle oil; a triple-sauced number with red vodka and a swirl of pesto; crispy pepperoni cups drizzled with hot honey and that creamy stracciatella; and a simple margherita. This has been labeled as among the best pizza in Miami by some trustable authorities, and the triple-sauced slice and the pepperoni with all the extras was worthy of lots of praise—-even with the too-cooked crust, and the weird ordering system and maybe even for those who had to wait.

With all the attention Miami Slice has received, it’d be easy to assume prices would’ve risen to unreasonable status. But per-slice prices run from $4.75 for the margherita to 11 bucks for a slice dressed up with the stracciatella and hot honey—pretty reasonable considering two slices will probably do it. Whole pies at $29 to $48 might seem pricey, but with eight slices each, they should feed three.

Our slices arrived so quickly we had eaten them before even finishing our glasses of a sweet red blend (the only wine available that night). As we headed out, the line for takeout orders had now stretched out to the sidewalk, and a mass of people crowded the park benches for a seat inside. There were those who looked impatient, cross-armed and wondering why they had to wait past the time they had booked to pick up a pie and why there were inexplicably open seats inside yet to be filled. Others seemed to be relishing in the anticipation, first-timers probably, hoping it’d be all that had been promised.

Is Miami Slice worth all the work to finally get a slice? It’s a fundamental question, and it’s an adventure to answer. 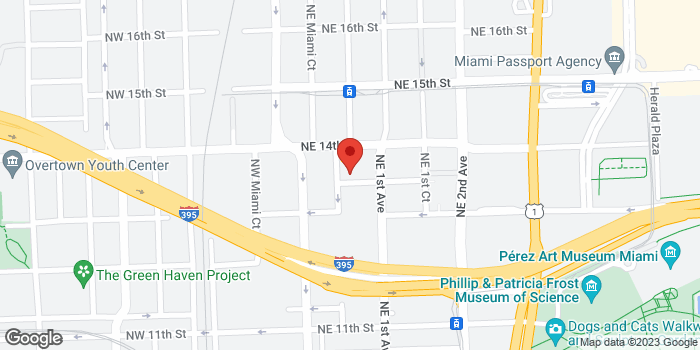