Where to go for the best hot chicken in Nashville

Nashville hot chicken is no longer served just in Music City ... you can order it in Chicago, New York, and even at KFC, but if you’re in town, you gotta eat it locally.

But first, you have to understand its history: It was the 1930s and a woman – whose identity is lost to the ages – wasn’t thrilled that her boyfriend was, as they say in the South, stepping out on her. She intended to seek revenge on the cheating man by making him a too-hot-to-handle recipe of his favorite fried chicken with blistering peppers and extra spices. Unfortunately for her (although not for us), the erstwhile paramour Thorton Prince liked it hot! The relationship ended but Prince’s family ran with the idea: Prince’s hot chicken, now referred to as Nashville hot chicken, was born.

In recent years, as the dish has gained even more popularity, chefs across the city have developed their own interpretations of the signature dish. And, just like Prince, most of them keep their recipes closely guarded—making a culinary trip around Nashville’s hot chicken scene one of the very best things to do in town, an attraction in its own right.

If you want to try an authentic take on the stuff, expect an open-faced white bread sandwich, bone-in with a pickle on top. Traditionally, the bird is pan-fried at varying levels of spiciness: the darker the spice mix, the hotter the fare.

On our list of the best hot chicken in Nashville , you’ll find both traditional and more jazzed-up versions of the delicacy, plus some vegetarian takes. One rule holds true across them all, though: it is milk only (not water, not beer, and certainly not a frozen cocktail) that will settle down the intensity of the spice in your mouth—so have some handy at all times.

RECOMMENDED: The best restaurants in Nashville

The first, the original, and many believe, the best, Prince’s is where to go if you want the roots of hot chicken. Head to Nolensville Pike on the city’s South side for fried birds six days a week. There’s also a Prince’s food truck stationed in the 6th and Peabody moonshine park south of downtown and another outpost inside the Assembly Food Hall at 5th and Broadway. All three are serious about their spices. 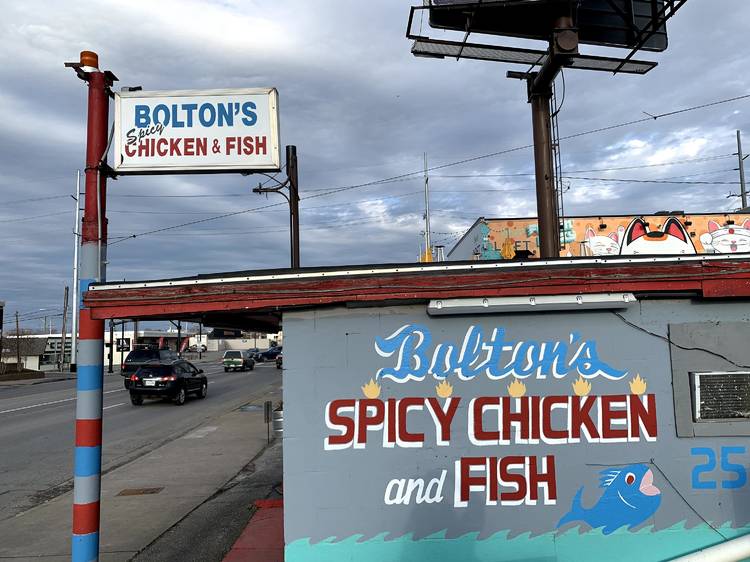 After Prince’s, Bolton’s is the next OG hot chicken purveyor, frying it up from Main Street in East Nashville. Bolton’s was opened in the 1980s, shuttered in the 1990s, and reopened in 1997. The authentic, multi-spice options are created with a dry rub. Bolton’s also fries up hot fish, catfish, and sells ribs and wings. There’s also a nice patio to sit and wait for your bird. 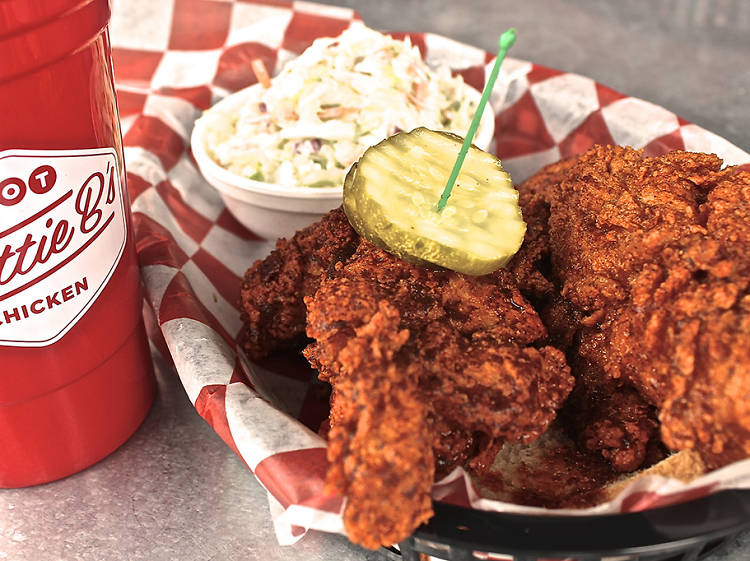 There’s probably a line outside of Hattie B’s Hot Chicken right now. Purists bemoan the fact that this isn’t the authentic hot chicken experience, but the recipes are delicious—the Shut the Cluck Up spice level is legit—and having a selection of sides, beers, and air conditioning while you wait does not suck.

One of the few traditionalists in town willing to share recipes, 400 Degrees uses seasoned flour to get started. Spices include cayenne, cumin, paprika, garlic and onion, with different dried peppers—such as habanero or ghost pepper—in the mix depending on the eater’s spiciness preferences. The owner of this Clarksville Pike eatery was a fan of Prince’s growing up—at one point, she ate it daily—and her deep-fried, thicker skin recipe is her take on the classic. 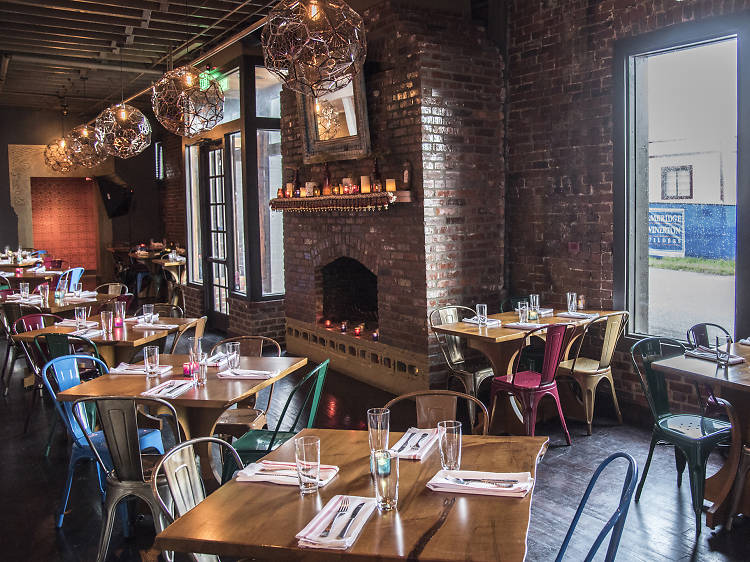 Maneet Chauhan came to Nashville to start her restaurant empire after her celebrity turn on TV’s Chopped, bringing her take on Indian cooking to Music City (she now owns four restaurants and is designing jewelry, too). So, it’s no surprise that her flagship eatery serves hot chicken pakoras, a combination of both traditions, seasoned with chat masala, orange peel, cayenne and more.

Nestled in the Buchanan Arts District, The Southern V is one of the city’s most popular vegan restaurants. Its vegan “hot chicken,” made from seitan, provides the same spicy punch as the poultry versions across town. Vegan options of traditional hot chicken sides, such as mac 'n' cheese and green beans, are also available. If you can’t handle the heat, opt for the vegan “fried chicken," instead.

As you might expect at a place that lists “stupid hot” as one of its spice levels, Subculture does things a little different. Among those are some offbeat menu items. Opt for hot chicken served with waffles, in tacos, and even in ramen at this Nolensville Pike eatery. If you opt for your hot chicken on a sandwich, you'll get it on a homemade bun. 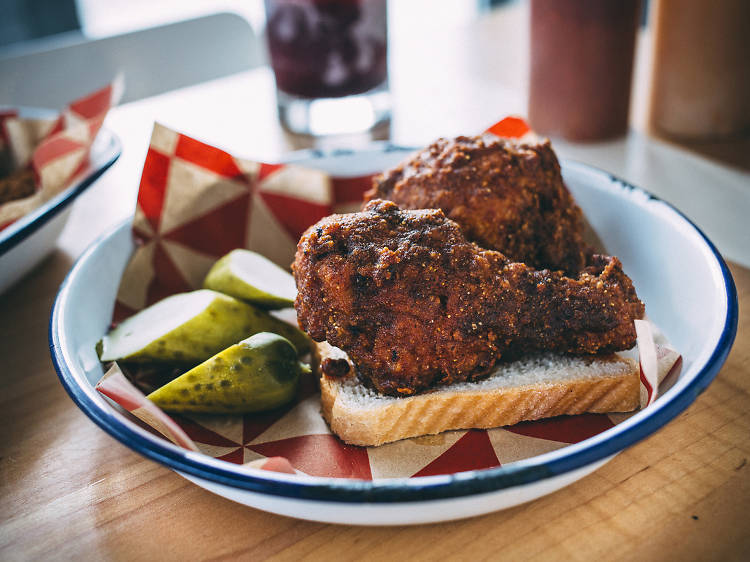 Some will say it is heresy to name a Chicago transplant to a list of the best hot chicken in Nashville. But the recipe is thoughtful, not derivative, and because it is deep-fried, rather than pan fried, you won’t grow old waiting for your food. Plus, Parson’s has some on-point frozen drinks and baked mac-and-cheese to go along with that spicy sammie. 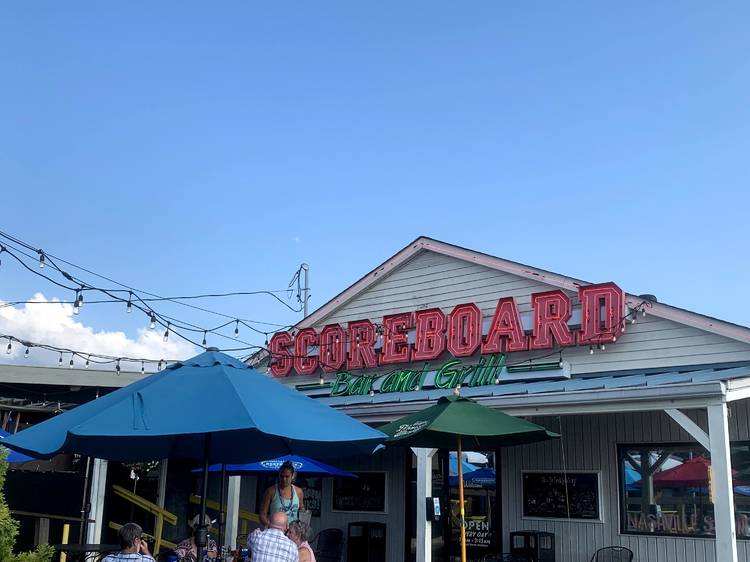 Located in Music Valley near the Gaylord Opryland resort, Scoreboard has a big menu, live music, late-night hours, and a casual, tourist-friendly vibe. In addition to the traditional white-bread-with-a-pickle-prep, options include a hot chicken salad, nuggets, wings, and hot chicken-and-waffles, all available with varying spice levels. While Music Valley isn’t a neighborhood where you tend to see locals hang out, they make an exception for the hot chicken at Scoreboard Bar & Grill. 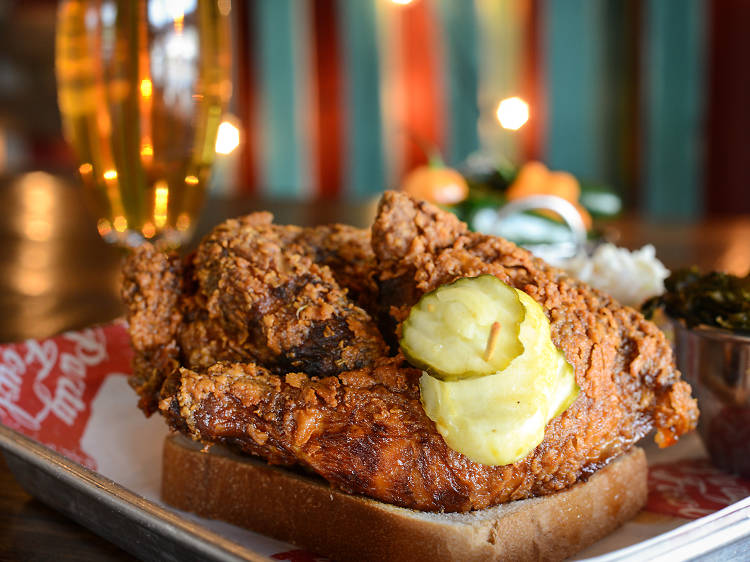 The name pretty much says it all. It’s a good time here, where your hot chicken can be served with a beer or a frozen alcohol concoction. If you want to mix it up, you can try hot chicken poutine, nachos, po’ boy, or even a hot chicken Cuban sandwich (with chimichurri and buttered bread). Party Fowl is a full service restaurant and bar with the game on big TVs and patios for lazy day drinking. 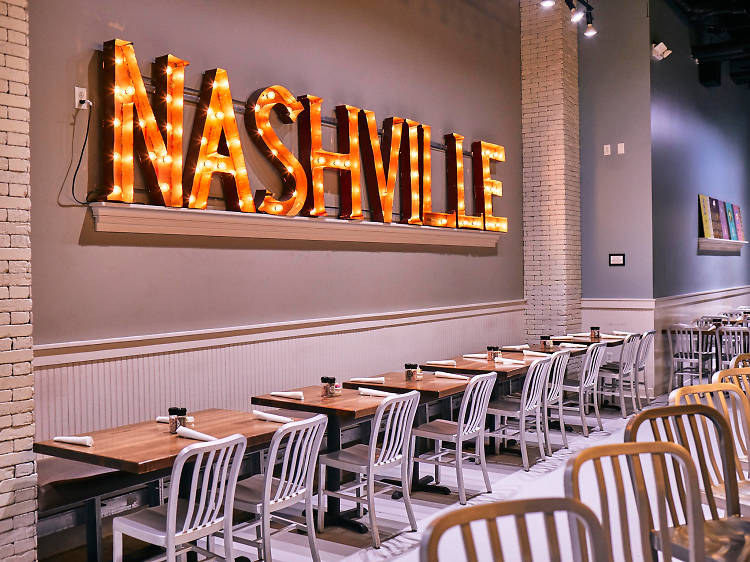 You’ll want to get up early to try this one. The uber-popular Biscuit Love started as a food truck and now has multiple locations—in The Gulch, Hillsboro Village, and Franklin—where folks line up each morning for a perfectly flaky buttermilk biscuit. The bright minds at Biscuit Love put a twist on hot chicken, layering a spicy thigh on said biscuit, serving it with a pickle, mustard and honey and calling it the Princess. Whether you want to sample some Tennessee whiskey or just grab a cold beer while you listen to the live music that made this city famous, the best Nashville bars are sure to deliver.