Nick Offerman interview: ‘The lower end of the torso must be cultivated just this side of producing fungus’

With the New York Comedy Festival kicking off this week, there’s a hell of a lot of stand-up, sketch and improv in town to choose from. One of the hundreds of comics performing is the mighty Nick Offerman (best known for playing the delightfully manly Ron Swanson on Parks And Recreation), and we’re anticipating his show, Full Bush, will be one of the 25 best shows to see at the fest.

You’re doing a show at the Beacon Theatre; what can Parks and Rec fans expect to see?
Well, they shouldn’t expect to see any stand-up—I don’t call myself a stand-up because I’m not as funny as stand-up comedians. But we do have a very good time and there should be material worth laughing at and some very clumsily composed songs on the guitar and the ukulele. I’ve just recently made my first ukulele so I thought that was worth writing a song about. I’ll be playing it for the audience and they can then determine how lucky that is or not.

Are you going to be manufacturing more ukuleles to sell at your woodshop?
That’s my intention. I’m taking myself on a slow path towards making acoustic guitars. I thought I would start at the kindergarten level with the smallest stringed instrument, the soprano ukulele, and work out the kinks as I graduated to larger instruments.

How much are they likely to cost?
We’re still in the prototype stage to determine if we can affordably make the ukulele for sale on the website. It won’t be cheap, but it will be melodious.

Excellent. Your show is called Full Bush. Should we take from that, that you’re not a fan of manscaping?
That would be an absolutely correct surmise on your part. I speak at some length against what our society has come to call “manscaping,” one of the most embarrassing terms ever coined in English. If that term is not a harbinger of the downfall of Western Civilization then I’ll eat my hat.

Do you have advice for any young, misguided men who might be considering such a path?
Yes. Make an about-face—the lower end of the torso, commonly known as the pudenda, must be cultivated just this side of producing fungus. You want to keep that area fecund, it’s Mother Nature’s billboard. Not only should it not say, “I am clean and meticulous”, it should say, “I am ready to procreate.”

You once said that when you were living in Brooklyn a few years ago, you got so bored you built a canoe. Do you have similar plans this trip?
That’s true. I won’t quite have the time to construct any water craft on this visit, the one thing I’ll do is go see my wife in her Broadway play called It’s Only A Play.

What’s harder—making good comedy or making a good canoe?
Gosh, that’s a good question. They’re very similar in many ways, I mean, they both require patience and the acquisition of fundamentals. You know, you can’t deliver a joke without developing a sense of timing, and you can’t put a keel on a boat without first learning to sharpen your chisel and properly glue wood to wood. Ultimately I suppose comedy would edge out a canoe in difficulty because an audience, I think, is a more mercurial piece than the somewhat dependably organic medium of a piece of wood.

As someone who’s known for being very good with their hands, what do you make of the current fashionable Brooklyn aesthetic of everything being organic and handmade? Are you a fan, or is it just mystifying to see people making a big deal of men acting more traditionally like men?
It’s interesting—my role of Ron Swanson has strangely coincided with, respectively, a mustache movement, a bacon movement, and now this sort of manliness survival movement. And I find all of them incredibly silly. In my lifetime as a blue collar working laborer, I’ve always worn Carhartt clothing and work boots, and at some point there, that style was completely shanghaied by the hip-hop group. People would see me in my work clothes and say, “Oh, are you a fan of rap?” and I’d say “No, I’ve been wearing these work clothes my whole life and I’ll still be wearing them when no one is listening to, uh, Doctor Drake or Chilly Beyoncé anymore. I’m actually a very vocal proponent of handcrafting and old-fashioned self-reliability. That’s my number one soapbox topic, but I’ve been talking about it for a long time and I’ll still be talking about it when the cool people of Williamsburg [chuckles] have moved on to whatever their next fashion is, which I suppose will be some sort of robot. Everybody will have a robot. But for what it’s worth, I’m glad that people are making beer and learning how to grow their own produce and taking an interest in blacksmithing, I think it’s a lot healthier than if everybody was, you know, taking up cocaine as a hobby.

Is there anything worse to Ron Swanson than the idea of embodying the zeitgeist?
Oh gosh. Sure, I mean, I think if he was stranded in a socialist country without a way out, that would probably be his worst nightmare.

What do you think Ron will be doing 20 years from now?
Probably the exact same thing he’s doing now. He’ll be making things out of wood, paddling his canoe, making love to a beautiful, dark haired woman, and consuming enough bacon and eggs to choke a team of horses. 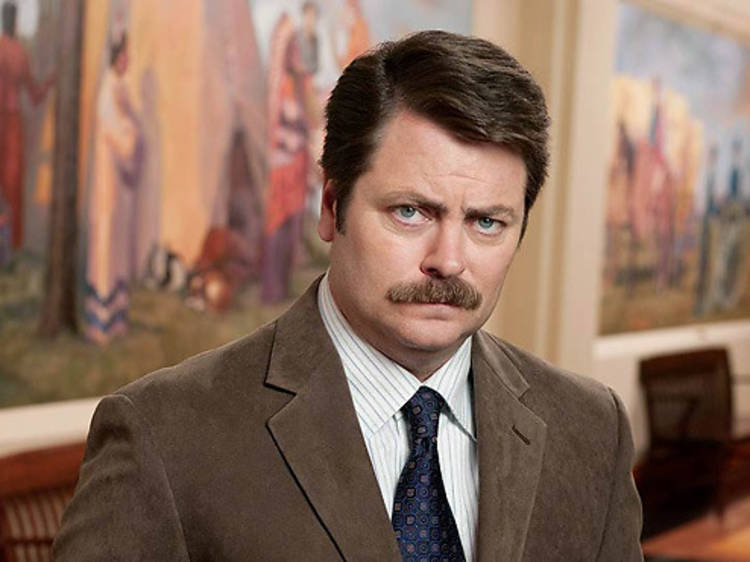 The handmade-ukulele-wielding comedic artist best known for portraying Ron Swanson on NBC's Parks and Recreation hits the stage to share songs and tidbits about life. Maybe he'll even explain the complexities of working with wood.