My Account My Profile Sign out
My Account
Search
Worldwide North America United States New York State New York Barb Jungr interview: ‘The joy of these songs is that I have no idea what they mean until I speak them’
Advertising

Barb Jungr is the high priestess of cabaret. Like Nina Simone, to whose work she devoted a 2008 album, the superb English singer approaches her music with devotional intensity and delivers it with deep respect for its mystery and power. But whereas Simone's affect tended toward severity, Jungr is a mostly joyful oracle; even when singing the darkest songs, she often wears a beatific smile or at least a knowing one. In Hard Rain, Jungr's new show at 59E59 Theaters, which begins on Oct 28 and runs through November 9, she takes on what may be her bleakest material yet: wary, hard-nosed, political songs by Bob Dylan and Leonard Cohen, two of popular music's deepest, twistiest bards.

Neither man's work is easy to communicate. But Jungr, who turned 60 this year, is one of the world's leading interpreters of the more recent chapters of the Great American Songbook. She has a particular affinity for densely poetic work, which she infuses with an irrepressible streak of common sense grounded in her Northern English upbringing. Between songs, she is disarmingly garrulous, funny and candid; when she sings, in a warm, breathy voice acutely attentive to rhythm, she is serious but free of pretense. We reached her via Skype recently at a flat in London, where she was enjoying a glass of red wine.

So what is this latest show?
Well, it's the Hard Rain album but live, which hopefully is more exciting. And I think it's particularly interesting at this point in time, tragically. Since I started singing these songs live, every single time we do a gig, every single night, I can see the audience going, "Oh, shit! This is now. Oh, shit!" [Laughs] A lot of those songs are 30 and 40 years old, and they're present.

What modern themes do you think these songs tap into?
Every so often, you come to a line like, for example, in "Everybody Knows," when Cohen says, "Everybody knows that the plague is coming." Well, hello! Hello! Look what's happening. He just pinpoints the fear elements in humanity that recur. ["A Hard Rain's A-Gonna Fall"] is the most extraordinary writing, and I haven't even begun to touch that song yet. It took me at least seven years to scrape the surface of "Like a Rolling Stone"; I didn't even start to get near that till about three years ago, and even now when I sing it, I go, Oh, yeah, another onion layer. With "Hard Rain," I'm still holding the parcel. I get to, for example, "Guns and sharp swords in the hands of young children," and on a daily basis, that means something different to me. It might mean Freetown or a gang war in Brixton or something else, but daily, there's something that line means. To me, it's Shakespearean.

What do you mean by that?
I mean it's universal; it's at the core of humanity. They are both able to just strip it away, so you go, Okay, I'm going to take off my gloves, I'm going to do bare-knuckle fighting, and this is what it is like inside our souls: It's dark, and it's weary, and sometimes it's gorgeous, and sometimes it winks at you, and sometimes it'll spend a night with you, but basically it's dark in there. And I think that's fabulous.

Will you be doing the album straight through?
I won't be doing one of the Dylans, but I've added another Dylan, and I've added a Cohen: "The Future." Simon [Wallace] and I did a really nice arrangement of it.

Will Simon be playing piano for you here?
No, Tracy Stark. And Mike Lunoe will be playing percussion. The album is full of percussion, and Mike is so good, and he just jumped at it; he has ideas. And it takes the pressure off Tracy to hold all the rhythm in the left hand, which is a nightmare for my piano players, because everything is so tightly rhythmic. So it's very nice for her; it will free her.

What do Dylan and Cohen have in common, for you? And where do they differ?
They drink from the same water; they're rooted in that kind of Judeo-Christian biblical morality, which, whether you agree with it or don't agree with it, whatever way you cut the biscuit on that stuff, it's in you, and you're dealing with it. So you get that same kind of imagery in both of them all the time and that same kind of distanced view. I think it's the process that's different. Dylan writes very quickly and makes some corrections, but essentially that's it, whereas Cohen crafts and crafts and crafts. It makes the tumbling quality of Dylan, and the measured quality to Cohen's work. And there's a tenderness to Cohen that I don't find in the same way in Dylan, usually. But the beginning points and the end points are the same. Between them, they've gone on completely different journeys, but they've arrived at those same points.

Many of the lyrics in Dylan and Cohen are densely packed—sometimes elliptical or evocative, rarely straightforward. How do you navigate that as an interpreter? How much do you try to find a meaning to act out, and how much is sort of incantatory?
You hit it right at the end: It's incantatory. That's exactly what it is. If you load meaning onto something, you do it at your peril. Because for it to have life, we've got to—by we, I mean me and whoever's in the room if I'm singing it—we've got to discover that meaning at the same time. If I already know what it means there's nothing to discover, there's no space for anybody else to find anything. I'm telling you what to think, and that's rubbish. For me, the joy of these songs particularly is that I have no idea what they mean until I speak them in the moment, and when I speak them, night to night, they mean different things. People who go, "I'm going to show you what this is"—you know what? I'll go read a book. It's the wrong kind of preaching. But if you're speaking in tongues…you don't know what you're saying, and that's exciting. I want people to discover it in the moment with us.

That is the magic for me of cabaret, in a smaller room. It's always different. But nightclub singing is considered by many to be a bit old hat—a retro pursuit, not mass technology.
I think that's changing. I recently sang at a party in a very hot area of London called Hoxton, and it was absolutely packed with bright young things or people who want to be a bright young thing if they're not. And I got up, and I sang three Leonard Cohen songs. And afterward, there was this line of people—all these young men with hair like samurai in a Kurosawa movie, and they've got little backpacks on, queuing up to say, "Listen, I just wanted to say, that was amazing." And I said to Simon afterward: They don't hear people sing! Singing—I don't mean X Factor singing; I mean singing where you're in a room with somebody who is actually singing—is a thing that's quite shocking now. It's sort of like being an antique. You're valuable because you've lived, actually. And I think there's something in that.

I'm going to throw out a few song titles from the show, and I'd like you to say what comes to mind. Dylan's "A Hard Rain's A-Gonna Fall"?
It's a wooden galleon with sails, and everybody's died from lack of fresh water, and it's being tossed on shitty, horrible waves, and the two people left are trying to get the wheel to spin round one way or another. That's "Hard Rain"!

Cohen's "First We Take Manhattan"?
Every time I sing it, I think of old Europe and the conflict that is incomprehensible unless you're in old Europe. Walking around the Czech republic, you still can feel in rural areas the weight of the Nazis and the Russian dominance, and for me, that song wormholes through that in a really interesting way.

Dylan's "Masters of War"?
To me, it feels like a woman at a graveside, like those women in Chile who just came out and stood in the street [during the fascist years]: the naked acts of courage that people make when they're beyond pain. That song feels for me like it's beyond pain.

Cohen's "The Land of Plenty"?
I spent some time in Africa in the '90s doing my work over there with the British Council; I wet to Malawi about five times, I went to Cameroon twice, I went to Sudan and Tanzania. And I gave workshops, because I would only sing there if local people could come and have a stage as well. And if you've spent any time there, you just go, "We don't know we're born!" I think that song really gets at that. May the lights of the Land of Plenty shine inside our heads, and may we just stop moaning and whinging and get on with the fact that there are better ways to be in this world. How, I don't know, because apparently we're all on the edge.

Dylan's "Chimes of Freedom"?
There's the moon, and it's come out from a behind a cloud, and you suddenly realize that we're small and insignificant, and then it goes back behind a cloud, and you have a cup of tea, and you go and pet your cat. But that tiny little moment—that's the moment where you understand the universe. And we're given those tiny little gifts of moments, and if we're awake, we find them. And that whole song is about those tiny little gifts in that storm. 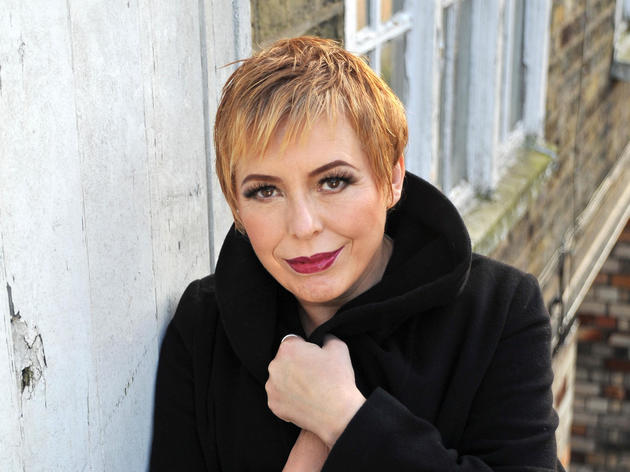 One of the world's great cabaret singers, England's Jungr is a a joyful oracle, with a particular affinity for densely poetic work. Between songs, she is disarmingly garrulous, funny and candid; when she sings, in a warm, breathy voice acutely attentive to rhythm, she is serious but free of pretense. Her new set at 59E59 is devoted to wary, hard-nosed, political songs by Bob Dylan and Leonard Cohen.