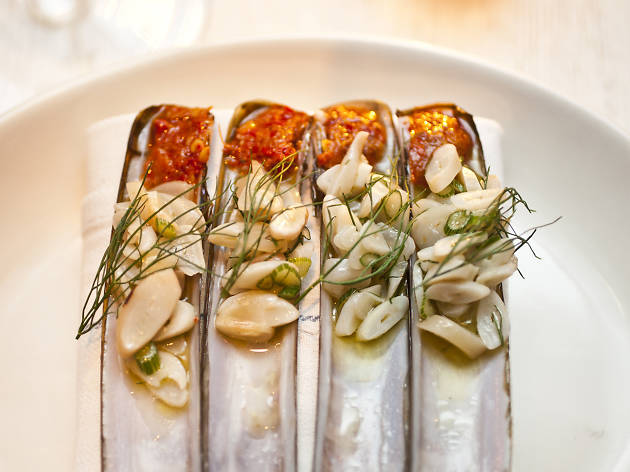 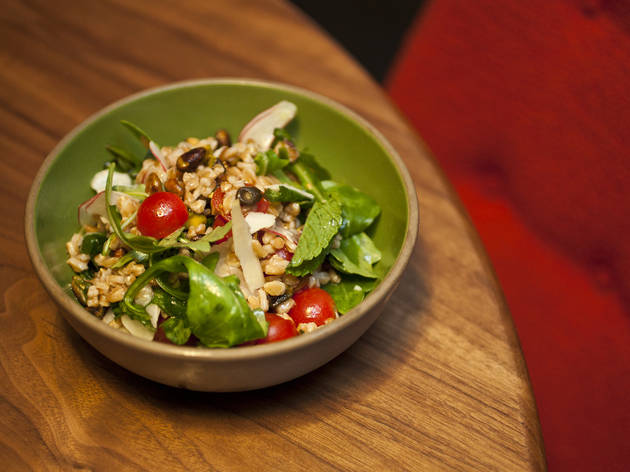 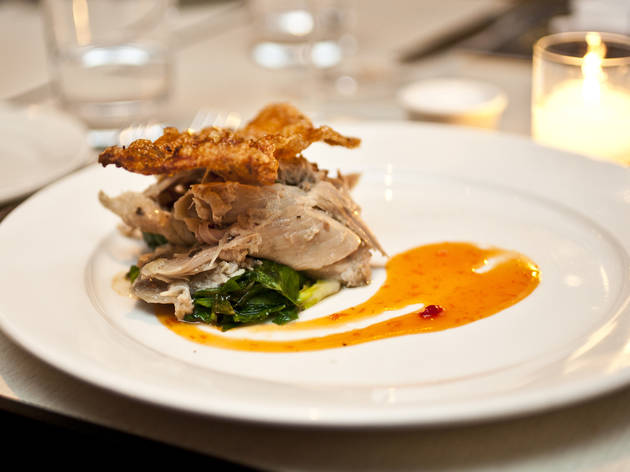 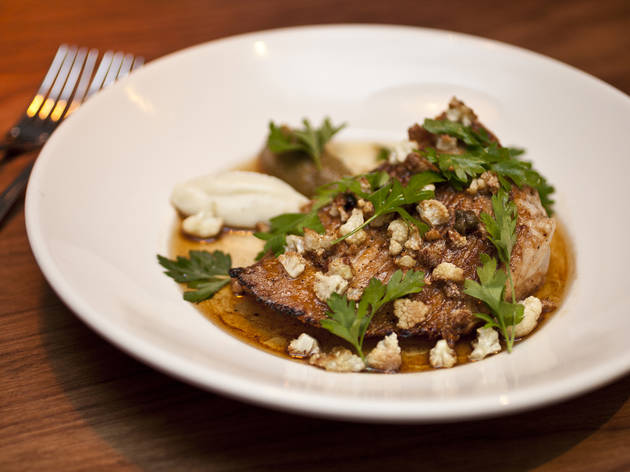 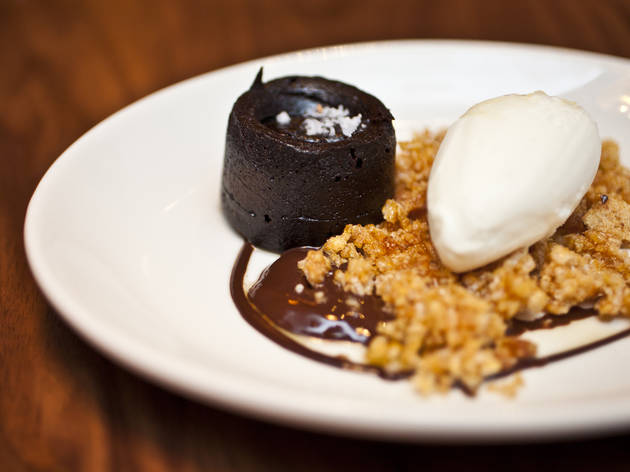 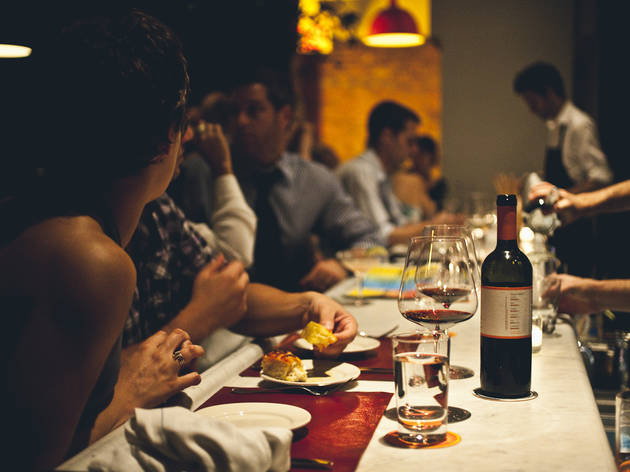 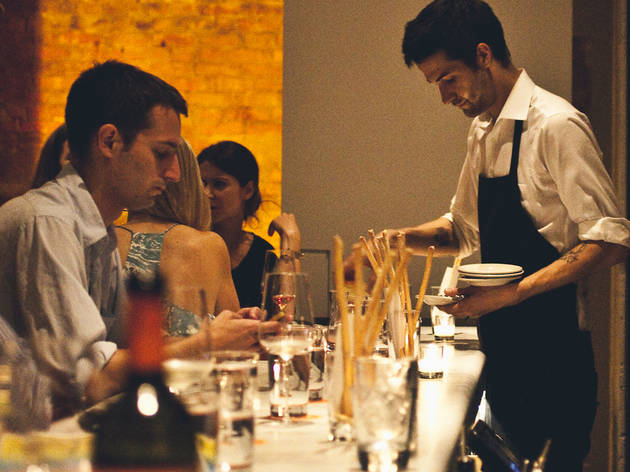 Sipping wine out of a $60 Zalto stem is an activity typical of more formal surroundings, but at Charlie Bird, you swirl a smoky Rodano chianti riserva while nodding your head to the Notorious B.I.G. Devoted in equal measure to seasonal cooking and serious wine, this West Village spot roughs up its own polish with subtle hints of the street, like large graphic prints of boom boxes and the now-ubiquitous restaurant soundtrack of early-’90s hip-hop.

Less common than the blaring beats is the considerable wine muscle behind the place. Robert Bohr, a renowned sommelier late of Cru, and 24-year-old Grant Reynolds, from Colorado’s Frasca Food and Wine, preside over the clamorous dining room, packed with thirtysomethings fresh from work. Together they manage a wine list that’s short and vivid, a haiku to Cru’s tome. With a few glasses backed by about a hundred mostly Italian and French bottles—any of which can be ordered by the half—the offerings span some lesser-known regions, like Mount Etna and Corsica. It’s one in a burgeoning class of wine-focused restaurants, like Pearl & Ash, that deliver vino nerdism with downtown cool.

Start with a grapefruit-bitter glass of Etna Bianco and the razor clam crudo ($12). Barely steamed and sliced thin like shaved garlic, the briny clams are tugged further down into the sea by fermented baby fish, then shot up to the surface by piquant pickled chilies. Slurp them out of their shells and enjoy the ride.

Four-time James Beard Award nominee Ryan Hardy—of Aspen’s the Little Nell—sees to the menu. For a chef who gained respect in landlocked Aspen, he has a defter touch with seafood than with meat. His skate ($27) pulls away from its wing like the tenderest shreds of pulled pork, growing tantalizingly earthy as you swipe it in succession through caper and cauliflower purees and brown butter. But musky hunks of suckling pig ($29) aren’t moist enough, with sweet red pepper mostarda failing to sauce them into lusciousness.

A bowl of nearly too-soft cuttlefish-ink chitarra strands (small $18, large $24) is saved by toothsome cuttlefish and crunchy bread crumbs, its lemon-bright tomato sauce turned wonderfully sinister (if you choose) by the jar of chili oil that accompanies each pasta. Back on land, a blissful, Thanksgiving-rich bite of crispy brick chicken ($55 for two) and fried bread dabbed in chicken liver mousse is knocked jarringly from autumn into spring by minty fava puree. The herb is a good-faith effort to cut the richness, but it vexes a palate primed for rosemary and sage.

These Italian-inflected American dishes fall under the vast umbrella of “farm to table,” and Hardy’s cooking reminds us that without a capable kitchen in between field and fork, the term quickly loses meaning. Take the summer-picnic salad ($13) of chewy farro and juice-swelled cherry tomatoes with a verdant infield of arugula and mint. Shop at the Greenmarket all you want; it takes serious chops to achieve such balance.

Service at Charlie Bird is equally considered, with little touches like free bottles of sparkling water and dishes for sharing split (and beautifully presented) upon arrival. Yet despite the glut of servers bottlenecking the slim upper level, waits between courses can be long, and the cacophonous din could make even a sort-of-young backpacker reach for earplugs.

Any bad feelings will not make it through the molten chocolate cake ($12). The clichéd classic is made new with a scoop of salty olive oil ice cream and a pile of hypercrunchy honeyed crisped rice; scoop the three elements together and you’ve got one tricked-out bite of cereal and milk. A sweet note to end the meal on.

As you step out onto Sixth Avenue and the thump of Biggie slowly fades, you realize that Charlie Bird may not hit every high, but it certainly strikes the right chord.

Price per person: $100 gets you a few small plates and a pasta to split, an entrée, shared dessert and a glass of wine or two.

Cocktail chatter: The mignonette that comes with oysters is three years in the making, concocted from vinegar that Chef Hardy started fermenting when he was still in Aspen.

Soundcheck: When dinner is in full swing, you may be hard-pressed to tell “Gimme the Loot” from “Ready to Die.”