Read Time Out's review of The Louvre below or click here for our exclusive photo tour of the museum.

The world's largest museum is also its most visited, with an incredible 8.8 million visitors in 2011. It is a city within the city, a vast, multi-level maze of galleries, passageways, staircases and escalators. It's famous for the artistic glories it contains within, but the very fabric of the museum is a masterpiece in itself - or rather, a collection of masterpieces modified and added to from one century to another. And because nothing in Paris ever stands still, the additions and modifications continue into the present day, with the opening of a major new Islamic Arts department 2012, and the franchising of the Louvre 'brand' via new outposts in Lens (www.louvrelens.fr) and Abu Dhabi. If any place demonstrates the central importance of culture in French life, this is it.

Some 35,000 works of art and artefacts are on show, split into eight departments and housed in three wings: Denon, Sully and Richelieu. Under the atrium of the glass pyramid, each wing has its own entrance, though you can pass from one to another. Treasures from the Egyptians, Etruscans, Greeks and Romans each have their own galleries in the Denon and Sully wings, as do Middle Eastern and Islamic art. The first floor of Richelieu is taken up with European decorative arts from the Middle Ages up to the 19th century, including room after room of Napoleon III's lavish apartments.

The main draw, though, is the painting and sculpture. Two glass-roofed sculpture courts contain the famous Marly horses on the ground floor of Richelieu, with French sculpture below and Italian Renaissance pieces in the Denon wing. The Grand Galerie and Salle de la Joconde (home to the Mona Lisa), like a mini Uffizi, run the length of Denon's first floor with French Romantic painting alongside. Dutch and French painting occupies the second floor of Richelieu and Sully. Jean-Pierre Wilmotte's minimalist galleries in the Denon wing were designed as a taster for the Musée du Quai Branly, with art from Africa, the Americas and Oceania.

Mitterrand's Grand Louvre project expanded the museum two-fold, and subsequent governments have hardly slacked - in 2003, Jacques Chirac initiated a €100 million fundraising project that culminated in the opening of the stunning new Islamic Arts department a decade later. Set in the Visconti wing, the two-storey gallery actually lies underneath the courtyard (the architects couldn't change the Louvre's structure, so they had to dig down), beneath a floating golden roof built from 2,350 triangles. Once inside, you can feast your eyes on some 3,000 works, including gold treasures from Syria, ivories, miniatues, Ottoman ceramics and textiles, all displayed in chronological order. The collection is a tantalising suggestion of what artworks remain in storage, locked away due to a lack of funds. Bear in mind that the organisation and restoration of the Louvre are still a work in progress: check the website or lists in the Carrousel du Louvre to see which galleries are closed on certain days to avoid missing out on what you want to see.

The museum is also trying to strike a balance between highbrow culture and accessibility. Photography was banned in 2005 at the request of mainly French visitors, who complained that it interfered with their enjoyment; meanwhile, laminated panels found throughout provide a surprisingly lively commentary and the superb website is a technological feat unsurpassed by that of any of the world's major museums.

IM Pei's glass pyramid is a wonderful piece of architecture, but it's not the only entrance to the museum - there are three others. Buying a ticket in advance means you can go in directly via the passage Richelieu off rue de Rivoli, or via the Carrousel du Louvre shopping mall (there are steps down either side of the Arc de Triomphe du Carrousel, at 99 rue de Rivoli or from the métro).

Advance tickets are valid for any day, and are available from the Louvre website or branches of Fnac and Virgin Megastore. You can buy one from the Virgin in the Carrousel du Louvre and use it immediately. Another option is to buy a ticket at the Cour des Lions entrance (closed Fridays) in the south-west corner of the complex, convenient for the Italian collections. The Louvre is also accessible with the all-in Paris Museum Pass. Finally, don't forget that the Louvre is closed on Tuesdays.

Tips
• The Louvre's website, much of which is in English, is an unbeatable resource. Every work on display is photographed, and you can search the Atlas database by room, artist or theme.
• Laminated cards in each room provide useful background information. Audioguides (€6, €2-€4 reductions; ID must be left) are available at the main entrances in the Carrousel du Louvre.
• Don't attempt to see more than two collections in one day. Your ticket is valid
all day and you can leave and re-enter the museum as you wish.
• On Fridays after 6pm entry is free for the under-26s, but if you plan to make several visits, the Carte Louvre Jeunes (€15 per year under-26s, €30 per year under-30s) is worth getting.
• Some rooms are closed on a weekly basis - check on 01.40.20.53.17 or at www.louvre.fr.

Refreshments
Take your pick from Richelieu, Denon or Mollien cafés; the latter is just off the Mollien staircase and has a terrace. Under the pyramid, there's a sandwich bar and the smart, sophisticated Grand Louvre restaurant. The Restorama, in the Carrousel du Louvre, has self-service outlets. The terrace of Café Marly serves pricey brasserie fare and cocktails. 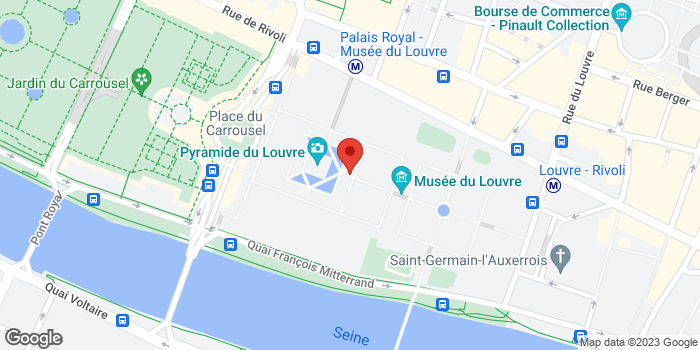