Ask the French what they think of British cuisine and you’ll usually get a speedy put-down to the effect of ‘it’s terrible’, or a baffled ‘is there even such a thing?’ Even the historic French nickname for the Brits, the ‘Rosbif’ (‘roastbeef’), is a wry comment on dodgy British food choices.

But it doesn’t have to be that way, as the brilliant British bars and restaurants below prove. It seems Parisians are increasingly being won over to the gourmet fish and chips cause, and increasingly opting for a pint of the black stuff rather than a glass of your standard French plonk. Even contemporary British art now has a much higher profile on the often inward-looking Paris art scene than it ever has before.

Bearing all this in mind, and given the miserable fact Brexit now risks cutting a much deeper cultural divide between the two nations, we thought it was about time we rounded up the best of the many British places to shop, eat, drink and browse art in the French capital. So here we go:

The best British bars and restaurants in Paris 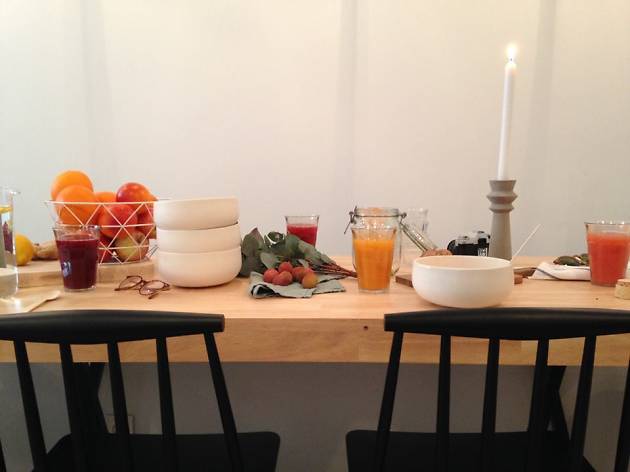 At Bol Porridge Bar, porridge is a sophisticated lifestyle choice. This pocket-handkerchief-sized space is a dreamy slice of Scandinavian-inspired design, all pastel tones, blond wood, elegant grain-filled glass vessels and piles of interiors magazines. Breakfast porridge flavours are all warming fruit and spice, and can be made with soy, almond or oat milk on request, while jugs of water flavoured with star anise are set on every table... 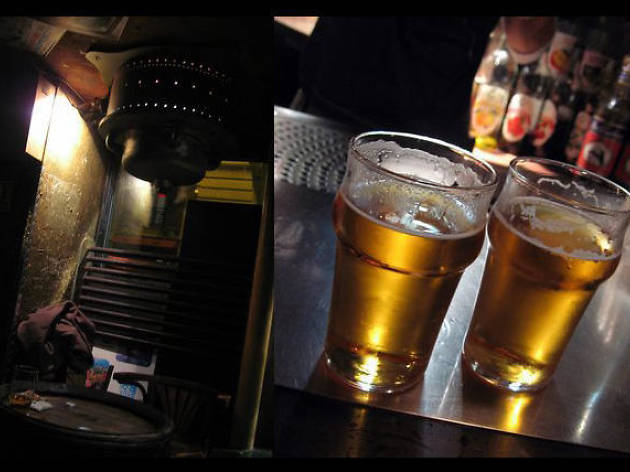 The Shannon is an Irish pub in Montparnasse. The décor is sombre with Spartan furnishings (stools, benches and barrels). On the face of it, the bar is fairly unremarkable: the staff is friendly enough, while the pints are on the expensive side (between €6.50 and €7.50). But the bar’s décor and offerings are not the real draw. We come for the inclusive atmosphere created by its open and approachable clientele. Free of the usual Parisian tics, clients come to the Shannon for nights out with friends... 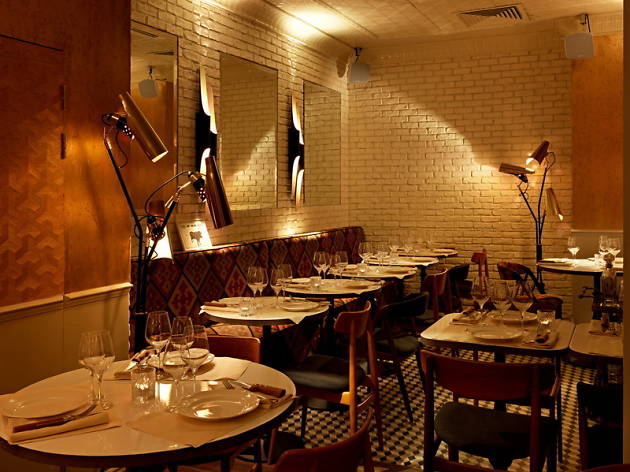 As you might reasonably have guessed, here it’s all about the steak. At the reins is star Parisian butcher Yves-Marie le Bourdonnec, well known for selling premium British cuts at his eponymous butcher’s in the 16th arrondissement. Now, he’s branching out into the restaurant world with this stylish debut opening near Châtelet. Served with Charlotte potatoes cooked in duck fat and grilled Paris mushrooms, the steak dish we order is juicy, generous and comforting in equal measure... 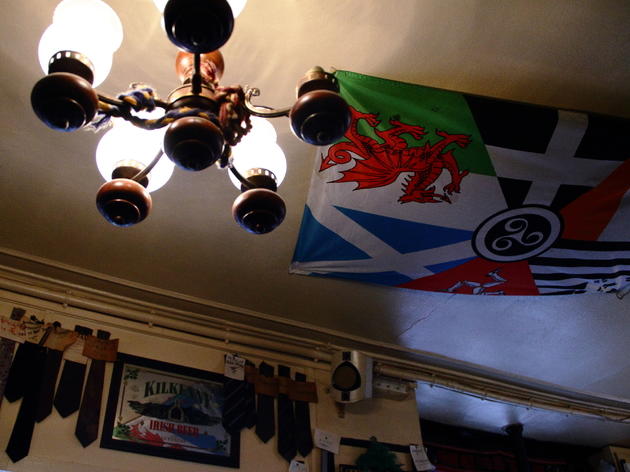 The oldest Irish pub on the left bank, and one of the three oldest in Paris. Unlike many of its blander contemporaries, Connolly’s Corner could almost be mistaken for an authentic Dublin tavern. It’s squirrelled away on the Rue Mouffetard, an area that counts plenty of soulless pubs, so happy are those who find it, for it’s said to serve the best Guinness in Paris. There are also innumerable excellent whiskies decorating the shelf behind the bar... 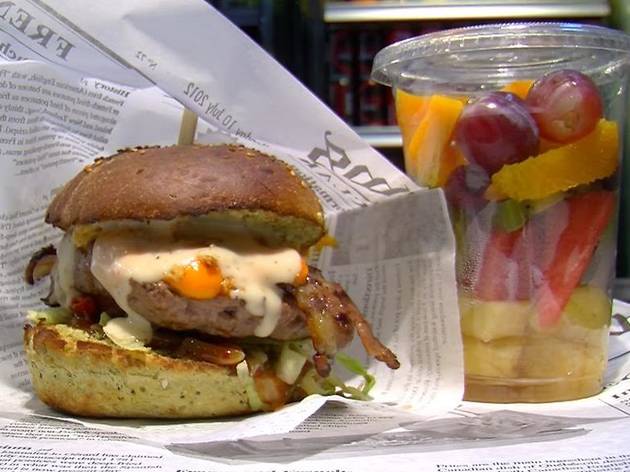 That humble British classic fish ‘n’ chips is getting the royal treatment on both sides of the channel, riding the current wave of enthusiasm for gourmet versions of comfort food. At George (named, intriguingly, for both George Harrison and George Michael, whose portraits hang in the dining room), top quality fish is dispatched daily from the Rungis market, ready for filleting in the kitchen and frying in the finest batter... 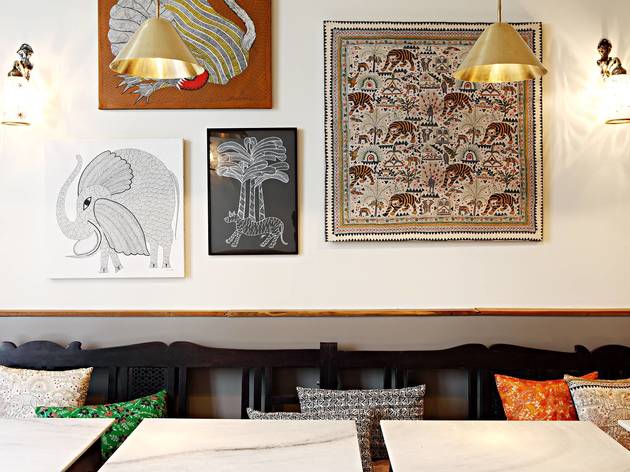 With its plain white frontage and understated interior design, this small Indian restaurant offers modern cooking in a sleek and stylish setting. Owners Stéphanie and Arnaud de Saint-Simon have already had great success with MG Road in the 3rd arrondissement, and they aim to top that here at Desi Road.The extensive menu of ‘small plates’ for sharing can be hard to choose from, but standouts include the healthy and spicy ‘Malai Prawn’ (prawns cooked in cream with curry leaves, mustard and freshly grated coconut) and the ‘lamb cake’ (with potatoes, curry yoghurt and cress)... 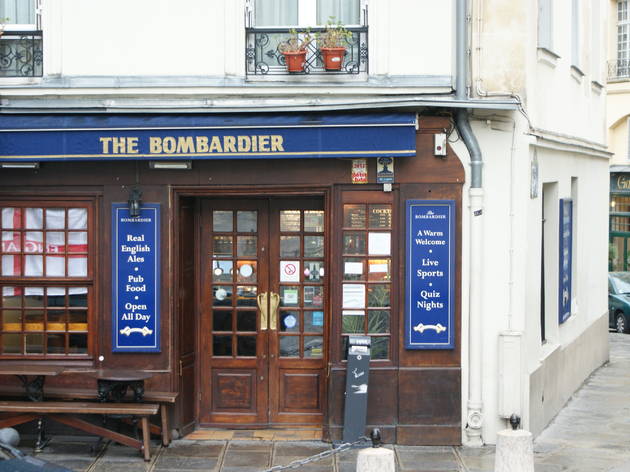 Perched the left bank hillock of Montagne Saint-Geneviève, The Bombardier is the place to come to drink stout in peace and to indulge in a bit of nostalgia for the other side of the channel, if you're so inclined. An extra boon is the unabashed British pub menu, from the generous breakfast to the fish and chips via chicken, fish or vegetable curry with mango chutney (yes, curry is Britain's national dish). A great place to hole up when the weather suggests you're back in London, not Paris... 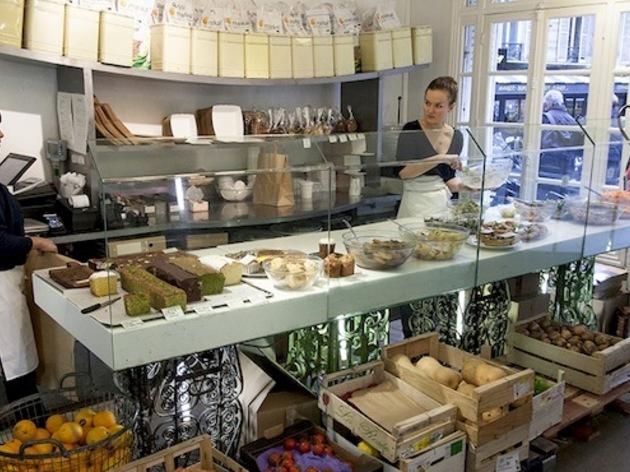 This English-themed café run by a Franco-British couple stands out for the quality of its ingredients – organic or from small producers – as well as the too-good-to-be-true puddings: carrot cake, sticky toffee pudding and, in winter, a chocolate-chestnut tart. The DIY salad plate is crunchily satisfying, but the thin-crusted pizzettes, daily soups and occasional risottos are equally good choices. Don't expect much beyond scones in the morning except at weekends, when brunch is served to a packed-out house... 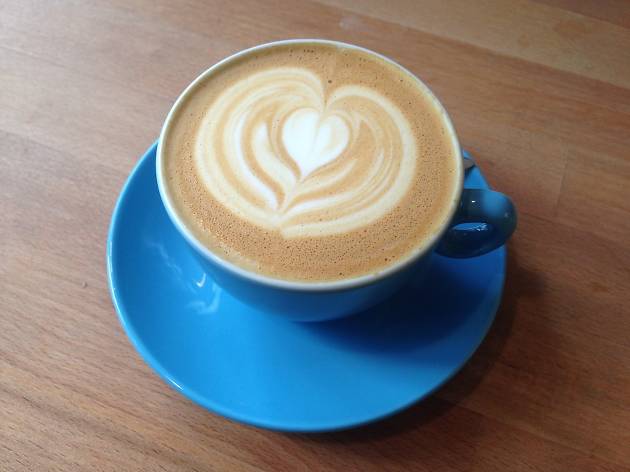 Found halfway up the hill in Belleville, this pretty, on-trend café was founded by two coffee-roasting experts who cut their teeth at Ten Belles and who source their beans from the Brûlerie de Belleville. Apart from the top-notch coffee, it's worth stopping by for the quality menu, which runs from breakfast time until closing at 6pm. Patisserie, sandwiches and granola start the day (around €3-€4), while lunch might include soup or an Italian piadina wrap... 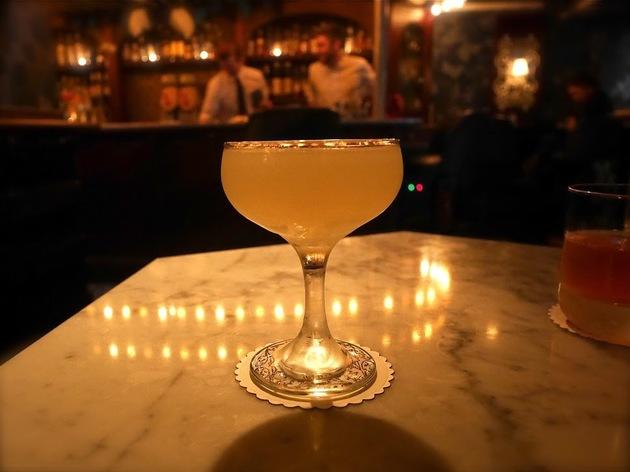 This sumptuous Art Deco bar, specialising in absinthe-laced cocktails, takes its name from the New Orleans brothel madam and procuress Lulu White. Nestled on Rue Frochot with a discreet windowless façade, Lulu White’s only marker is a small brass engraving of its namesake, taken from a 1920s mug shot. With its all-English staff and turn-of-the century décor, the bar is truly a world apart from both the sex shops and gourmet grocers nearby...

Where to shop British in Paris 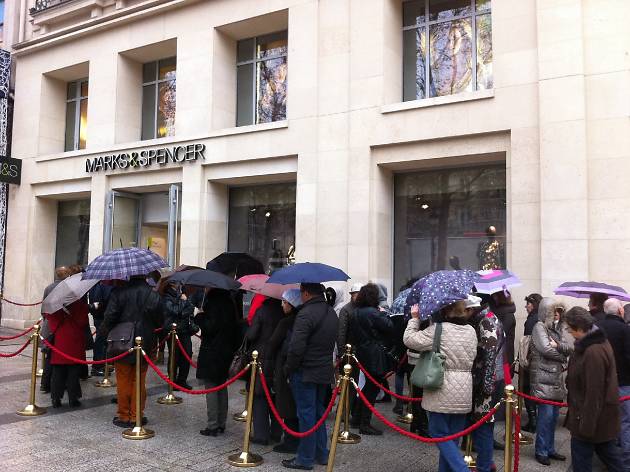 As odd as it may seem to Brits (for whom M&S is as about as exotic as its signature multi-packs of pants) queuing outside is business as usual for M&S since the chain opened its new flagship Paris store in November 2011. Paradoxically, while the majority of the French love nothing more than criticizing British food, give them a Marks and Spencer’s chicken-tikka sarnie, a pack of scones or a treacle pudding and the superlatives flow like wine from a barrel... 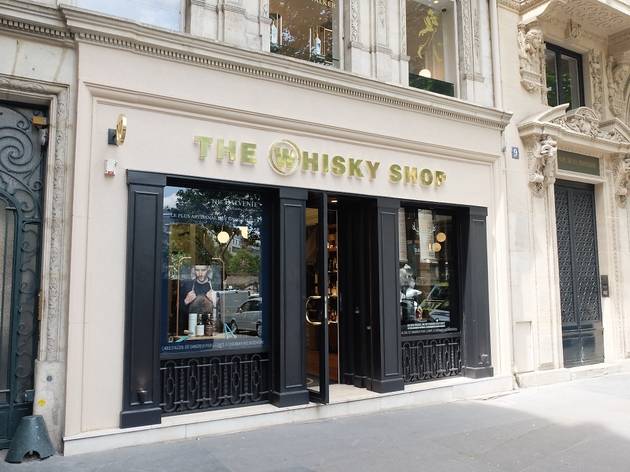 If you thought one whisky shop near the Place de la Madeleine wasn’t enough then you’re in luck. Clearly not intimidated by the competition, The Whisky Shop opened its doors in April 2016 just a few streets away from the already well-established Maison du Whisky. Although the boutique interior is appropriately chic and boasts a pretty impressive selection of bottles, it’s not as outwardly refined as its rival. But tant pis... 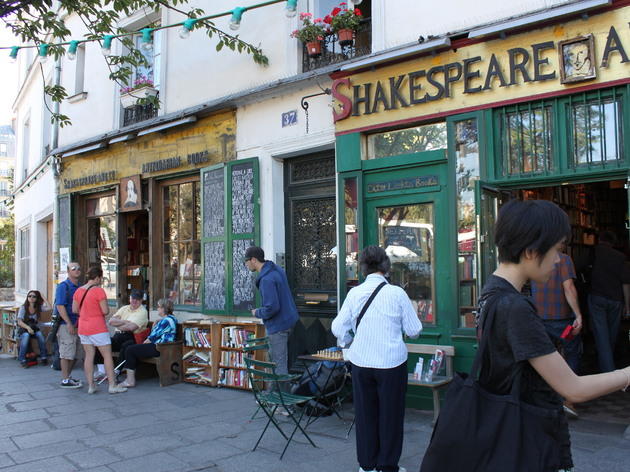 The original Shakespeare & Co, run by Sylvia Beach and beloved of Hemingway and his ilk, closed in the 1940s during the occupation of Paris. In 1951, wandering spirit George Whitman opened Le Mistral at 37 Rue de la Bûcherie, re-naming it in 1964 in homage to Beach’s legacy. A gathering place, source of inspiration and often a bed for beat generation bohemians, writers, travellers and readers for over 60 years, Shakespeare & Company has hosted thousands of ‘tumbleweeds’ – volunteer helpers who sleep in the shop... 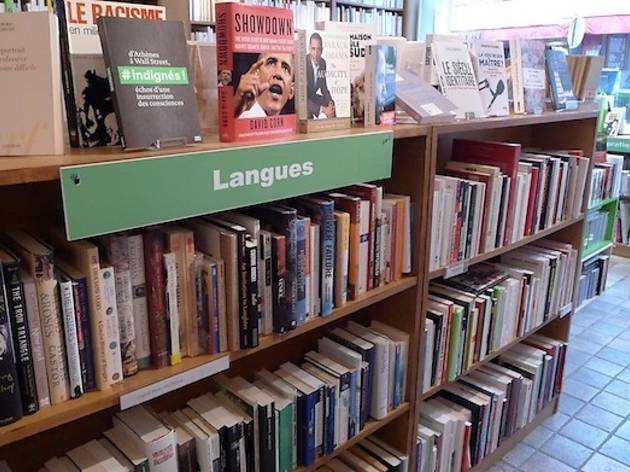 The Oxfam concept was imported into France in 2007 with the opening of its first store in Lille. Since then, two further stores have been opened in Paris. The pretty, apple-green shopfronts set the tone for these decidedly activist stores where people donate their books, CDs and DVDs, old clothes and a host of other pre-loved items. Oxfam then sorts them and puts them back on the shelves for sale with all proceeds going to a number of international NGOs fighting poverty around the world... 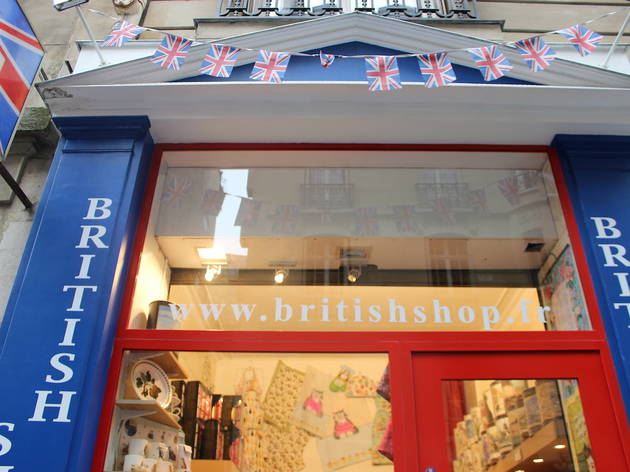 British expats looking for a home away from home could do worse than head to the plainly named British Shop. This crockery store peddles a Beatrix Potter image of the UK: Peter Rabbit-branded Wedgwood tableware, Brixton Pottery dishes with flower motifs – the works. Teapots, cosies and mugs – some of them emblazoned with Union Jacks – keep up the high tea theme, and children are catered for with lunchbox sets and a cutesy Bunnykins range... 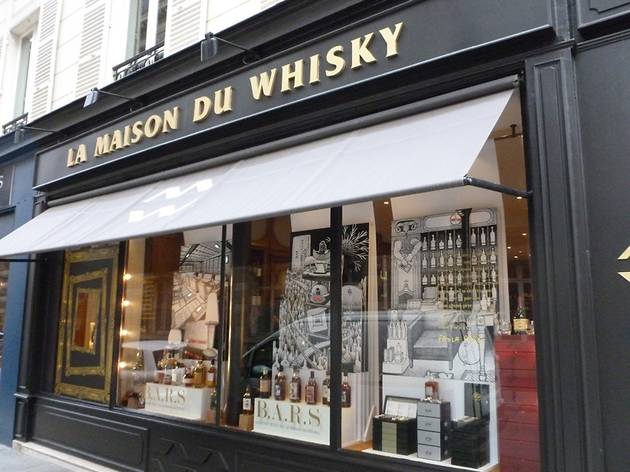 This is an unusually excellent spirits boutique, and for good reason: since 1968, La Maison du Whisky has worked hard at introducing people to the richness of single malts from all over the world. If Scotland is the principal origin of the golden liquor (from the Lowlands to the Orkney Isles, names to conjure with), the shelves are also stocked with Japanese, American and French bottles... 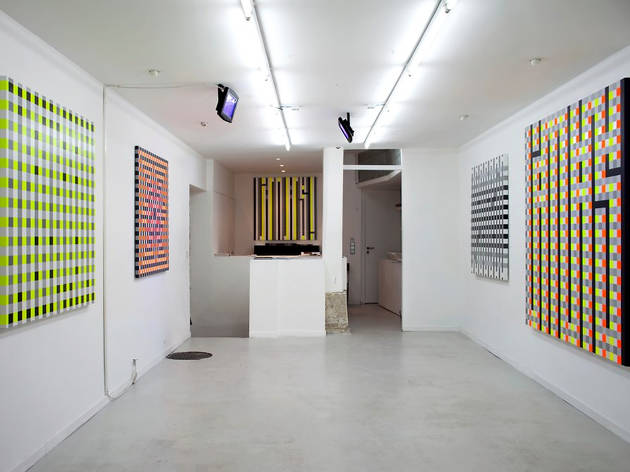 The Lebenson Gallery aims to bridge the 350-kilometre gap between London and Paris. Set in the heart of the Marais, on any one day the East London contemporary art scene might jostle for wall space with some of France’s most exciting emerging artists, like Jeanne Brianne, best known for ‘Random Control’, a series of ovaries preserved in glass... 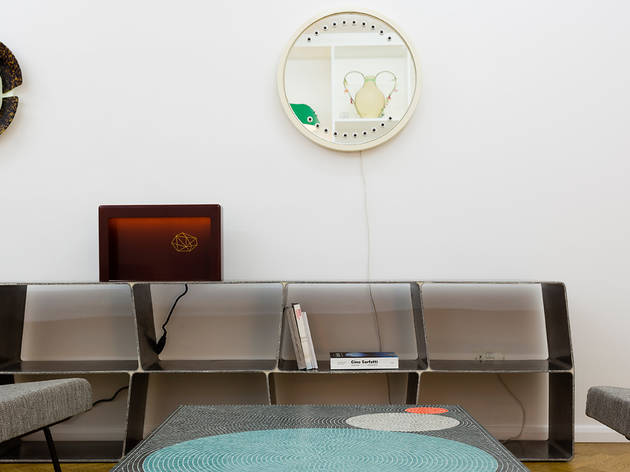 Galerie Kreo explores the best of both the Parisian and London art scenes with branches in both capitals. The focus here is on design, both past and present. Exhibits most fresh on the mind include the contemporary works of Ronan & Erwan Bouroullec, Marc Newson and Konstantin Grcic, while delving into the archives, the gallery has also hosted canonical names including Pierre Paulin, Pierre Guariche, Joe Colombo and Vico Magistretti...