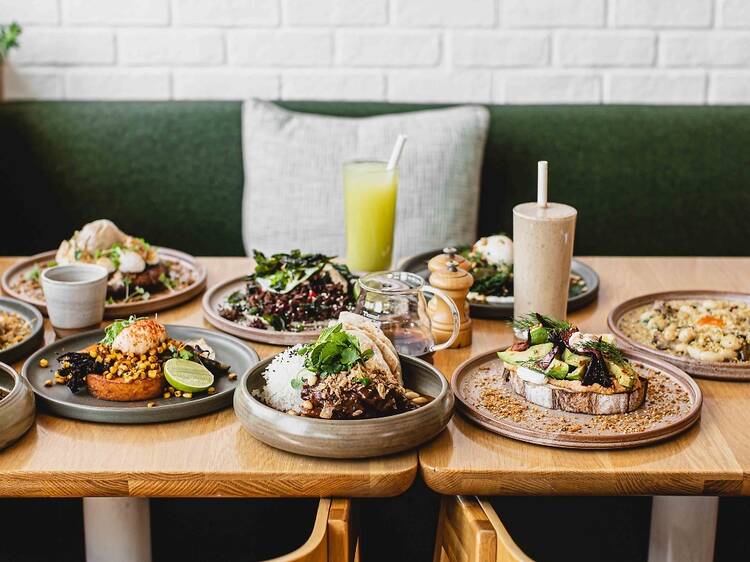 Here’s an idea: breakfast carbonara. A wobbly 63-degree egg is dying to burst and coat fat ribbons of pappardelle in rivers of yolk. High fives to Morning After’s champ chefs for that variation on the Roman classic. The breakfast menu at this West End offering hikes the flavour globe, offering Vietnamese-inspired omelette with pork mince, beansprouts, pickled carrot, chilli, coriander, mint and hoisin; or eggs benedict with buttermilk fried chicken (yowza). The venue has blonde wood and banquette seating upholstered in a shade of lush pasture green set against a gleaming white-tiled wall with neon signage. It’s easily the smartest café fitout the 'hood has seen in some time. Tech heads might select a perch at the bench where recharge ports are waiting for customers to plug in. On pour is 5 Senses and Roast by Yilli. Breakfast is an all-day affair on Sunday. Every other day breakfast slides into lunch with a menu infiltrated with squid, a roll packed with crumbed prawns, and a pork belly pad see ew. Kicking around with nothing to do on Saturday afternoons? Drop in to Morning After for yiros. Opa!

It was a great day back in 2007 when buddies Ritesh and Sandip arrived in Australia from India with a mere $1,000 in their back pockets. They began selling spices, opened Mirchh Masala grocery store, and hatched a plan to bring authentic Indian street food to Brisbane. From the street, silhouetted diners can be seen in booths lining the window upstairs from Mirchh's cluttered grocery store. It's where Brisbane’s Indian community gather to enjoy authentic street food and is exactly what Ritesh and Sandip dreamed. There's nothing flash about this vegetarian, cash-only dining room. Red and white crescent-shaped chairs surround circular tables decorated with Spirograph patterns. The lighting's crude, and Bollywood beams from the TV on the wall. One of those pre-programmed electronic thingies beeps and flashes when dinner is ready – dinner served on ordinary plastic plates sitting on ordinary plastic trays, together with ordinary plastic cutlery. This is where ordinary ends, because what's served up at Mirchh is one thousand and one shades of awesome. House specialities are puffed and stuffed semolina pani puri (ten pieces), flat, spicy potato topped sev puri/papdi chaat sprinkled with crunchy chickpea flour sev, and chole bhatura – a warming feast of chickpeas with airy, whoopee cushion-like pillows of house-made bread. Yep, all pastries, doughs and curry pastes are made in the tiny Mirchh kitchen. Every one of the estimated 300-400 samosas served daily is housemade as is the ice 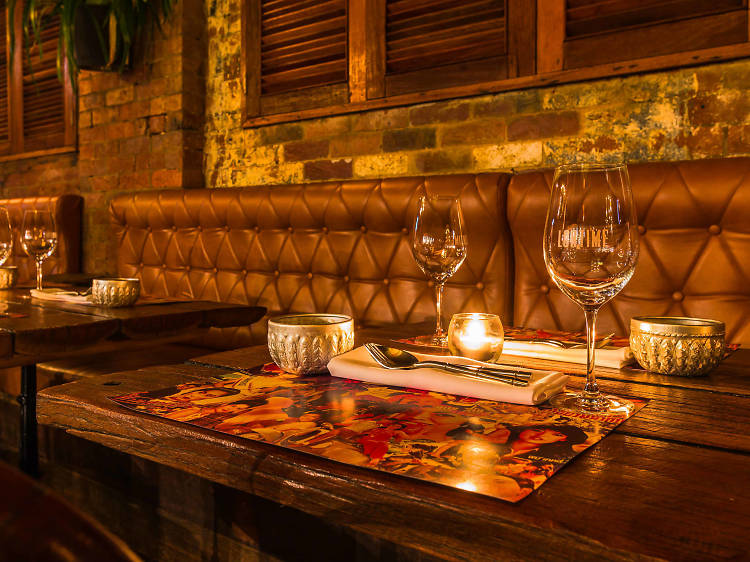 Longtime's entrance is concealed down a small alleyway furnished with 40 gallon drums, stools and books of libations to help keep punters hydrated while waiting for a table. And the wait can be long, due to the popularity of this Fortitude Valley shrine to modern Thai. The open kitchen almost runs the length of the lively venue, where chef Ben Bertei cranks out a menu of bar snacks, stir fries, salads, noodle dishes, sides, curries and desserts. Don't miss Bertei's vegan-friendly bowl of Thai-style green curry with braised cauliflower florets and fried green papaya garnished with splashes of coconut cream, kaffir lime and sprinkled seasoning of sweet palm sugar. 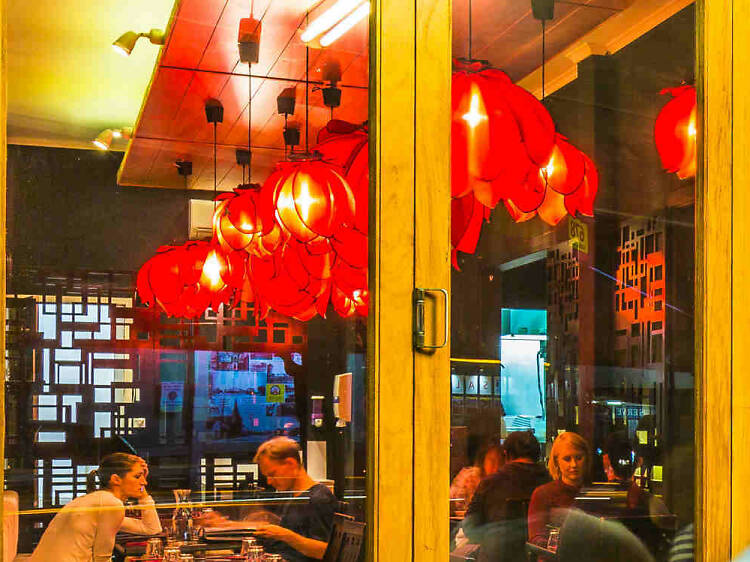 The fluorescent-lit footpath dining space is populated cheek-by-jowl with diners, their din happily competing with Cracknell Road traffic. Inside, the dining room is furnished in black lacquered tables and chairs, lotus-flower light shades and wall murals. Take time over the menu filled with tempting southern Vietnamese-style dishes, stories and insightful musings on Vietnamese food and culture. Smoky charcoal aromas escape from the busy kitchen where charcoal is the fuel for cooking dat lamb tho and Pepsi marinated pork belly. Open for dinner only. 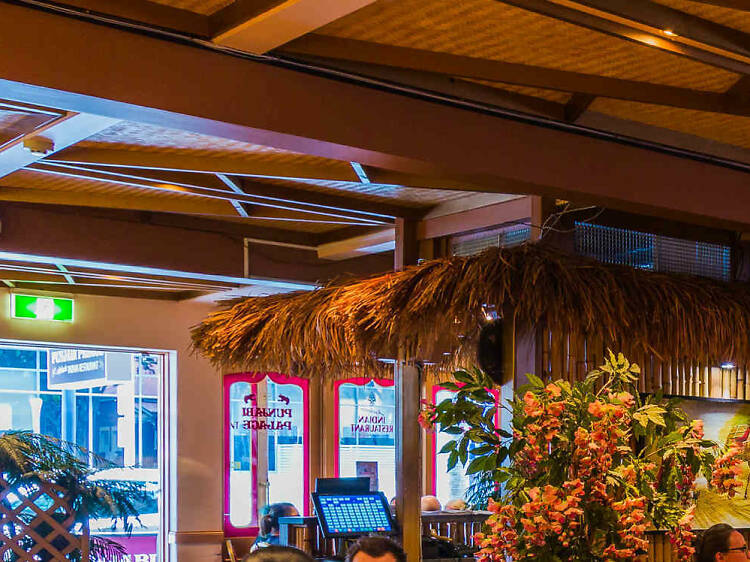 The venue welcomes customers with an endearing grass-fringed hut and ornamental black elephants with trunks triumphantly raised to the sky. Reflecting the owner's heritage, the 'Delight' is a simple curry of mild spice, slow-cooked meat (we go for the non-traditional beef), cashews and sultanas in a cream-based tomato sauce. Situated right in the thick of things on busy Melbourne Street, they're licensed, so you can slam a Royal Bombay Lager or two, or BYO for a minuscule $2 corkage. 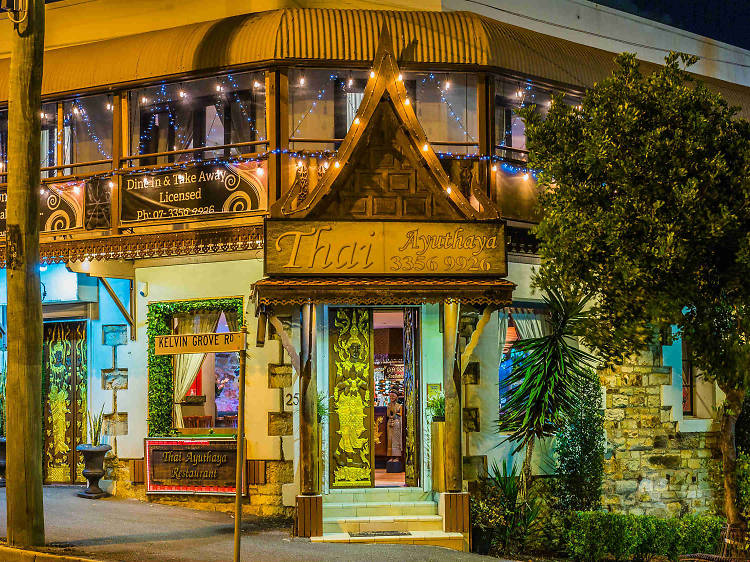 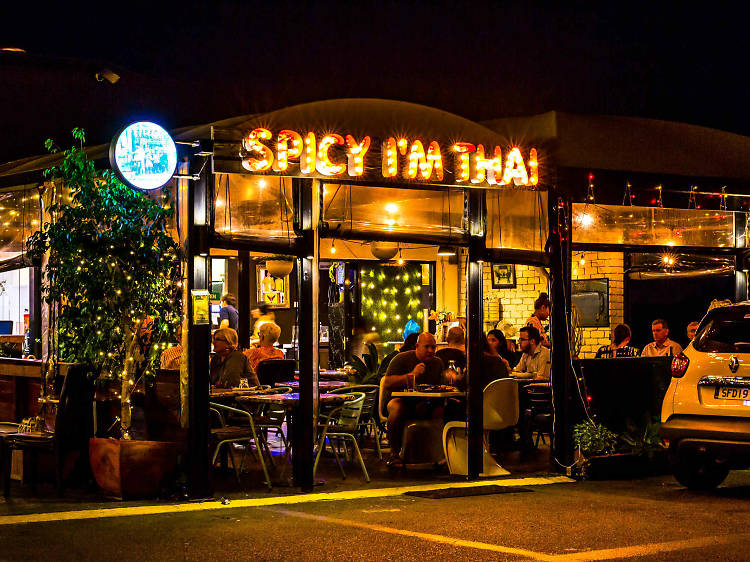 A chat with owner Miss Loedrudee Aksornworanart, aka Kethy, reveals a life filled with a love of food and family. Her interest in Thai cuisine was inspired by her chef grandmother, followed by formal training in Thailand, then Sydney, where Kethy ran Chinatown eatery 3 Mama Chefs Thai for ten years. Now in Brisbane, Kethy brings her love of food to her casual, no frills, suburban eatery; she recommends her soft shell crab and duck curry. Audible sizzles emerge from the kitchen and an aromatic, lemongrass-laced breath-of-the-wok escapes to mingle with diners. 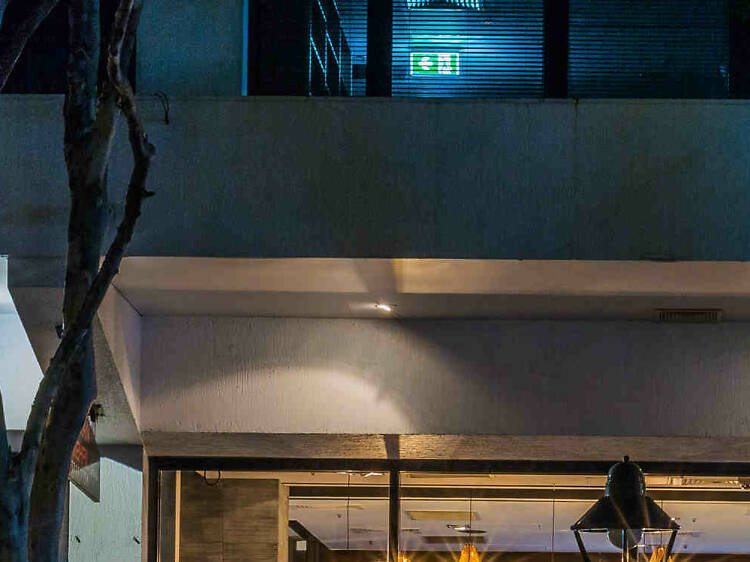 A ‘mehfil’ is a traditional evening of poetry and Indian classical music, and it’s also the name of a quartet of restaurants in Ipswich, Mount Gravatt, Taringa and this one in the city. It's found on a corner plot edged with leopard trees, down the corporate end of town. From humble takeaway shop beginnings in 2010, owners Rajesh and Priyanka Sharma have helped create a menu that dances north, south, east and west over India. One of the chefs' house specialties is slow-cooked goat curry. Set yourself up with this meat-on-the-bone, russet-hued curry, a pile of sunshine-yellow saffron rice and a naan bread or two and life will begin to look pretty good. Wash it down with a few Indian pale ales from the lengthy menu of booze and life will look even better. 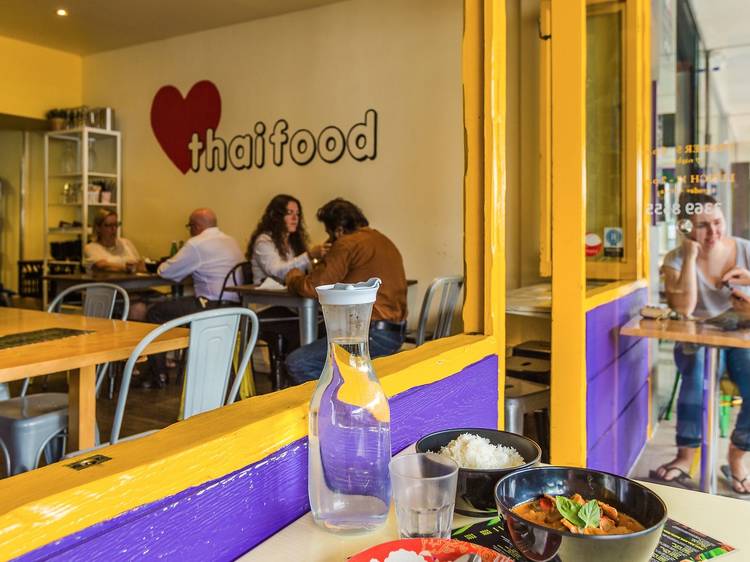 My Thai Kitchen had only been open three weeks when the 2010 Brisbane flood came along and wiped out the fledgeling business. They picked themselves up, and several years and a name change later are one of the busiest Thai diners around. It's a fun and colourful joint, painted eye-popping purple and saffron yellow with indoor wall mural of cleavers, pots, and woks. Serving up flavour-bombed Thai dishes chockers with fresh produce, much of which issupplied by the green grocer just a few doors down, they accommodate vegan and gluten-free needs without a blinking. There's no hiding the fact the kitchen uses Maesri curry pastes – they sell them at the counter – but why not when the resulting flavour is as good as it is? 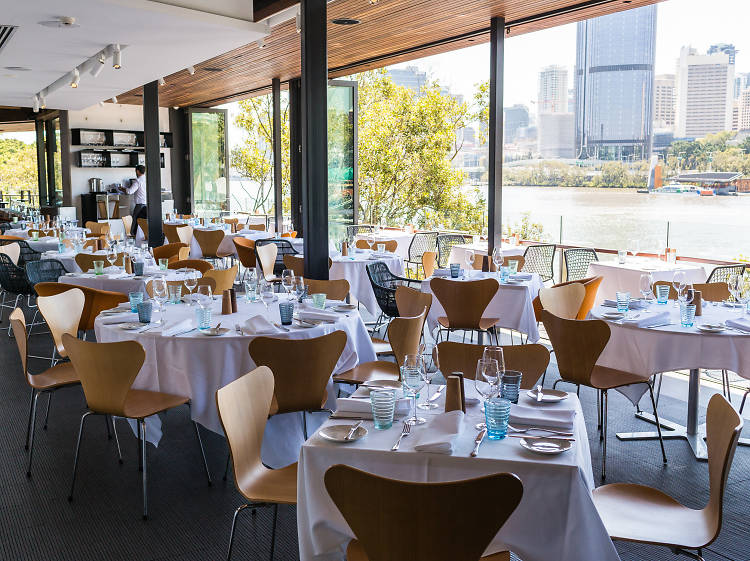 Lunch or dinner taken in Stokehouse Q's riverfront dining room is a treat indeed. The menu, created under the expert watch of executive chef Richard Ousby with his keen eye for local, ethical and sustainable, is compiled from the good stuff of land and sea. See the specials board for daily steak sourced from Australia's best producers. It's delightful teamed with Stokie's twangy mustard emulsion. Add a side of roasted Falls Farm Beetroot with creamy goat curd and you're set. Following the restaurant proper is Stoke Bar where the snacks are worth a dabble. Try sand crab on toast garnished with avocado, salty bursts of trout roe, dill and cress paired with a glass of cold chardy. 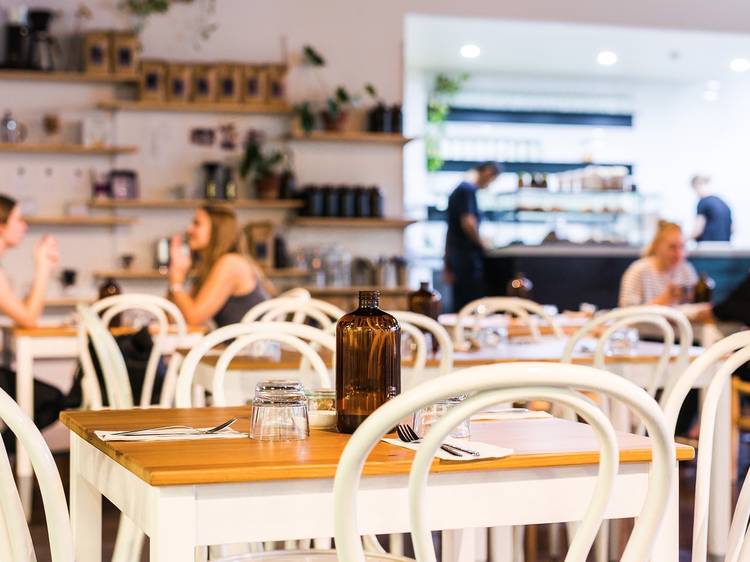 Kin is a darling little space occupying the end tenancy on a strip along Teneriffe's Macquarie Street. Outside, a cheery bloom of edible flowers shows off bright colours where customers sit under footpath umbrellas sipping espressos, flat whites and lattes. Head down to the white and blond-wood space of kitchen, counter and dining room staffed by the multigenerational Kin family serving quality café food with care. Take coarsely grated and golden potato rosti seasoned with pyramids of black salt with braise of mushrooms, asparagus spears, the world’s most perfectly soft-poached egg and a rustic quenelle of crème fraîche. 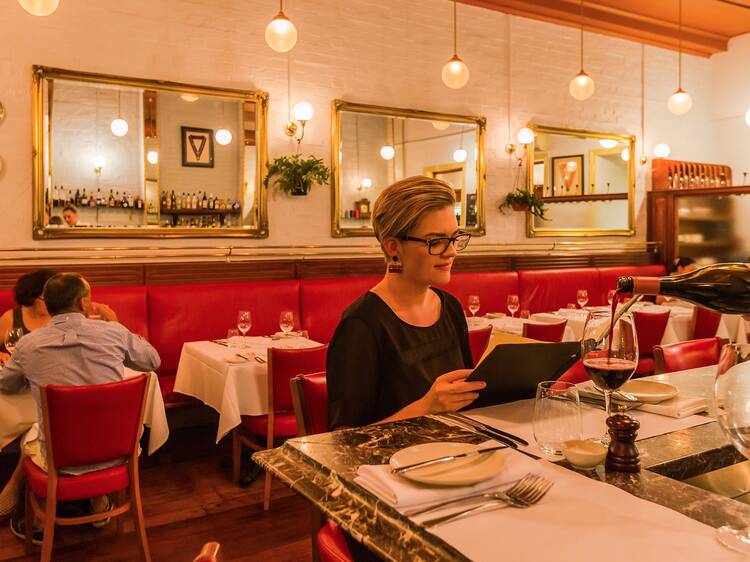 Au revoir Montrachet; bonjour Margo! The relocation of Montrachet opened the doors for owner-chef Americo Fernandes to flex his culinary muscle, follow his dream and open Margo, the loveliest mademoiselle on Paddington's Given Terrace. Paris-born Fernandes brings every bit of his French-Portuguese, fire-in-the-belly passion to the kitchen. His love and commitment are evident in his inventive menu studded with modernised classics of tartare, pissaladiére (like a putanesca pizza sans tomato, from Nice) and steak frites. But let's head to dessert of fennel mille-feuille with shatteringly crisp, caramelised puff pastry sandwiching a liquorice-like fennel and vanilla syrup purée, beside a perfect quenelle of house-churned Granny Smith sorbet and rods of compressed apple with basil oil. It's simply divine.