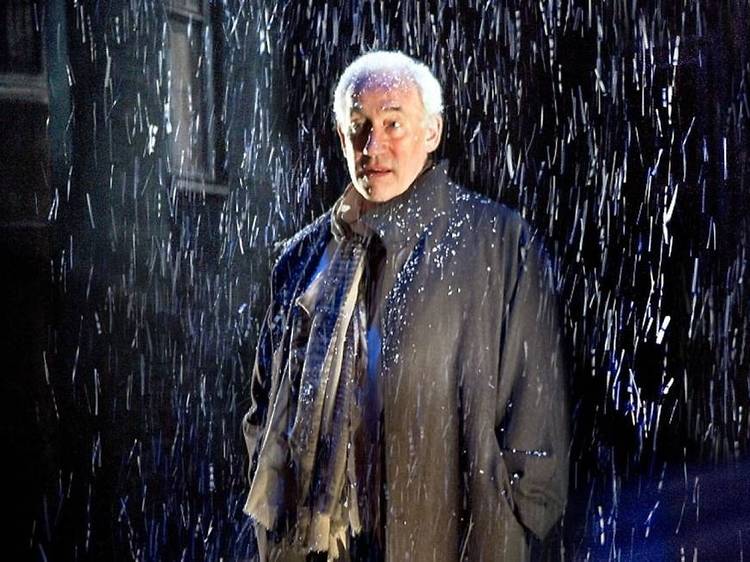 A Christmas Carol with Simon Callow

This review is from 2011; ‘A Christmas Carol’ returns for 2018 Though it's about as surprising as the satsuma at the bottom of your stocking, Simon Callow's spoken-word rendition of 'A Christmas Carol' has quaint Christmas charm to spare. Dickens's story has always a stage staple. Within three months of publication, there were eight productions running simultaneously. Neat, mystical and transformative, it's an inherently theatrical tale, complete with hardcore lefty politics. Callow draws these to the forefront, emphasising the gritty social realism within the pearly fairy tale. As one would expect, not a syllable goes uncherished. Callow's voice – deep and crisp and even – explores every contour of Dickens's phrasing over a streamlined 80 minutes. One or two characters are delivered with real comic aplomb. When Scrooge calls out of his window the morning after his visitations, a surly horn-voice replies: 'Uh,it's Christmas Day, innit!' Tom Cairns's minimalist staging, with its revolving gauze and the odd scene-setting item, is classy, and Callow, as always, is warm as chestnuts roasting on an open fire. But there's still something lifeless about this. It never really connects with us. On press night, Callow only acknowledged our presence when struggling with a tricksy bit of stage business, which leaves an unsavoury sniff of vanity in this otherwise fine Christmas fare. 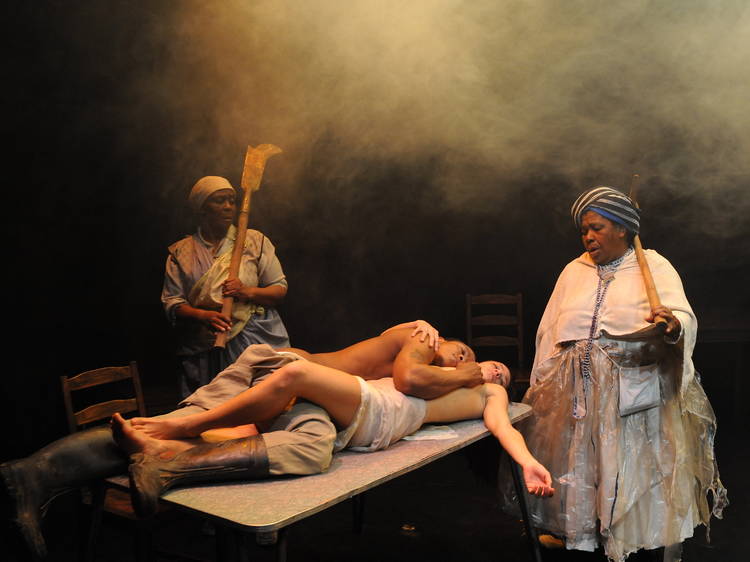 This review is from London, 2013 In order to have its full erotic charge, any production of August Strindberg’s ‘Miss Julie’ needs to be situated on a social faultline. When it was written in 1888, the taboo of a haughty aristocratic daughter seducing her father’s servant was enough to create shockwaves. But ‘Mademoiselle Julie’ – a recent, distinctly tepid, high profile production starring Juliette Binoche and updated to modern Europe – challenged the play’s continuing relevance. Such doubts are exploded by this extraordinary production, which has sailed down from the Edinburgh Festival Fringe by way of New York on a sea of ecstatic reviews. Set, symbolically, in the semi-desert region of the Karoo in modern South Africa, writer/directorYaël Farber’s ‘Mies Julie’ uses racial and political tensions to raise the sexual temperature to boiling. As white, wealthy farmer’s daughter Julie, Hilda Cronje prowls the stage like a leopard – when she’s facing away from the action she presses herself against the back-stage wall as if she would make love to the bricks if there were no other option. A constant electronic subsonic hum accompanied by the low trill of a saxophone contributes to the sense of simmering unease. Farber’s production paints a desolate picture of post-apartheid South Africa. In the kitchen that all too appropriately becomes a melting pot, Bongile Mantsai’s black servant John cuts a dignified, restless figure, torn between resentment of the oppression endured by his f 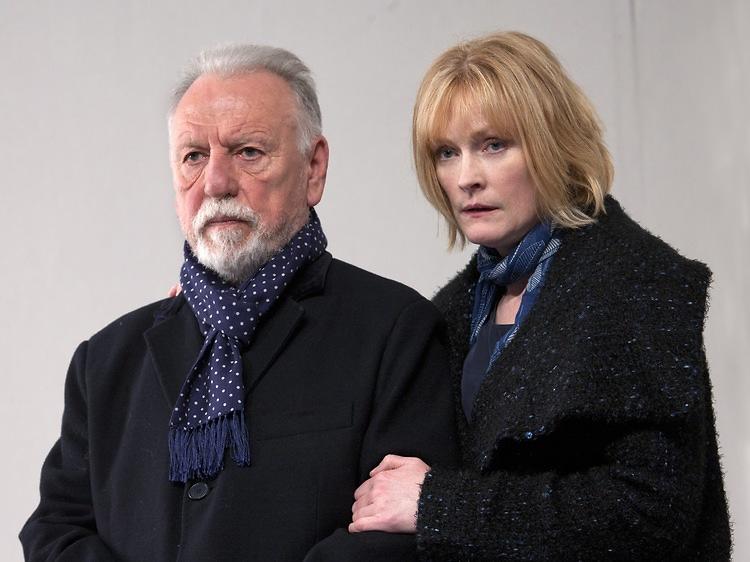 This review is of 'The Father's first West End run in October 2015. Kenneth Cranham returns with a new cast that includes Amanda Drew as Anne. The sense of unease sets in quickly. You think you’ve got the essential information organised – the daughter, Anne, blonde, with a beauty that suggests both strength and fragility, is informing her father that she is moving to London to be with her lover Anton. The father, André, witty, gently larger than life, is clearly confused about a couple of issues – he cannot see why his daughter is at the end of her tether, nor why he is being accused of hitting someone. Clearly there has been some terrible misunderstanding.Then the edges of the stage flare white, and the set itself blacks out. A piece of Bach plays crisply, and when the set comes into focus again, we are in the same room. A strange man is sitting with André. When André asks who he is, he informs him with understated menace that he lives in the flat. Further questioning reveals that his name is Pierre, and that he is married to André’s daughter Anne. Seized by confusion, André then smiles. In this strange game of life he has the upper hand, after all – in a moment it will be Pierre who is confused when he discovers Anne is going to leave him to live with Anton. Then Anne walks into the room - she is tall and dark and clearly has no intention of leaving anybody. What information are we to trust. Is this the real Anne, or was the Anne we saw five minutes ago the real Anne? The m 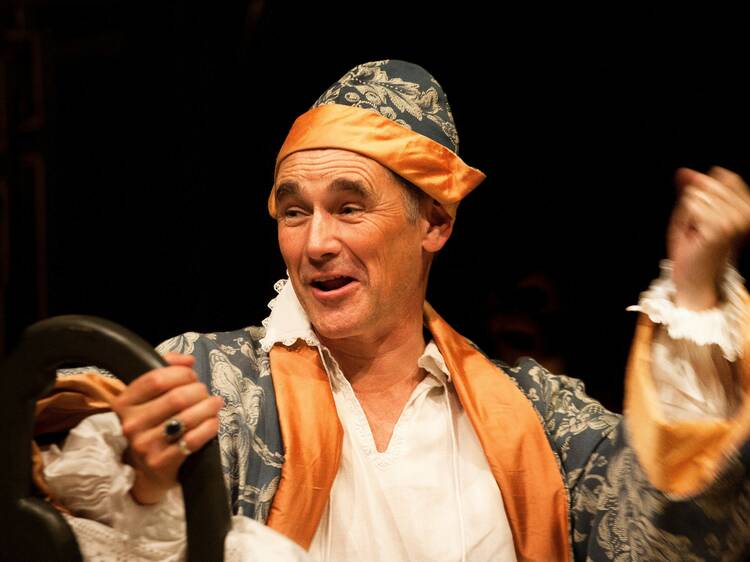 Farinelli and the King

If music be the food of love then ‘Farinelli and the King’ is a delicatessen of exquisite delights, in which the prime cut is the sensual richness of countertenor Iestyn Davies’s voice. Claire van Kampen’s play chronicles the extraordinary story of how the castrato Farinelli was invited to live at the court of Philip V of Spain, in order to cure his depression and instruct him in the music of the spheres.The production, which features Van Kampen’s husband Mark Rylance as the depressive king, played to enthusiastic reviews in the Sam Wanamaker Playhouse at the Globe earlier this year. There it is possible to imagine its intimate, eccentric tone working delightfully – but here, in the less forgiving space of a West End theatre, it initially feels like a somewhat creaky enterprise.The play opens with Rylance’s Philip V lying in bed while attempting to fish from a goldfish bowl. As Johnny ‘Rooster’ Byron – the barrel-chested modern-day Falstaff of Jez Butterworth’s ‘Jerusalem’ – Rylance wowed the West End with his subversive machismo. Here he proves again that he is one of the great chameleons - as well as one of the great actors – of our age, in a performance which emphasises the childlike whimsicality of Philip’s disorder. Yet for a while the performance feels too skittish to engage us in the tensions his depression is clearly wreaking both in his marriage and in the kingdom of Spain as a whole.Van Kampen’s play really sparks into life at the point when Philip’s queen Isabella 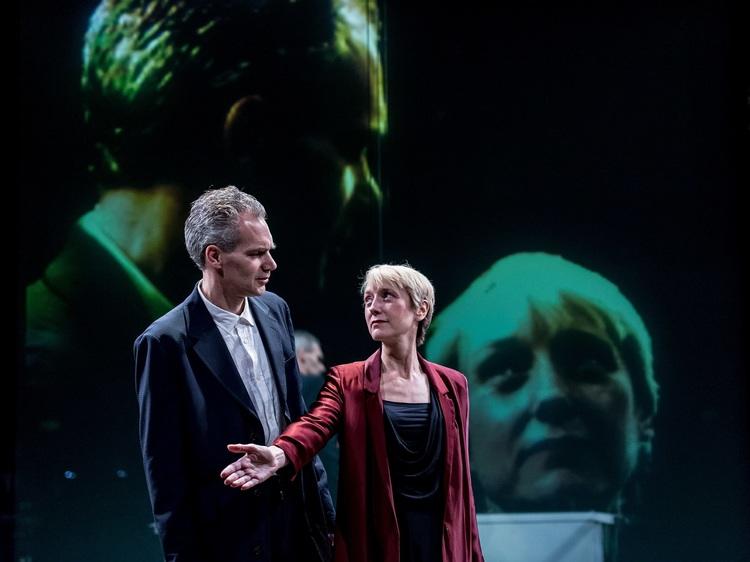 Robert Icke’s extraordinary adaptation of Aeschylus’s ‘Oresteia’ makes it feel as if you have electrodes wired into your soul. From the brisk digital click of the clock that welcomes the audience into the auditorium to the last achingly painful flashback to Agamemnon and Klytemnestra as parents of a happy family, it electrifies and devastates in equal measure. This is Greek tragedy filtered through ‘The Sopranos’, enriched with visual and verbal references to ‘House of Cards’, ‘Macbeth’, the ongoing conflict in the Middle East, and at one point even Gilbert and Sullivan. Accompanied by a daring soundtrack that flits devastatingly between the Beach Boys and John Tavener, it brilliantly transposes Aeschylus to become one of the great writers of our age.Even before the body of Syrian three-year-old Aylan Kurdi was washed up on a Turkish beach, the idea of innocent children affected by war has endured as one of the most potent arguments against it. Often stage adaptations of Euripides’s version of the myth show Agamemnon’s daughter, Iphigenia, as a young adult, but here Icke – who also directs – shows her as a small, precocious little girl, inseparable from her toy rabbit. The shift shows with painful clarity how Agamemnon - played with wiry dynamism by Angus Wright, a power-broker straight out of ‘House of Cards’ - must destroy the beating heart of his household’s happiness when he sacrifices her. Some versions of the myth show Iphigenia transformed into a deer – Icke cleverly t

Be immersed in chocolate (not literally) at Gingerline’s Godiva banquet

Chocoholics with a taste for something slightly different are in for a treat at an immersive chocolate banquet that’s running all this week. No, that doesn’t mean you’ll be dipped in chocolate (how much of a chocoholic are you?) but luxury chocolatier Godiva has partnered with the endlessly inventive Gingerline team to mark its new Sainsbury’s Masterpiece range. Belgian surrealism – delivered with Gingerline’s customary otherworldly wit – is the theme of the dining experience, which welcomes you into an artist’s studio before unveiling three works. We had a sneak peek last week and can report that this theatrical amuse-bouche has some of the most startling and sensuously delightful variations on chocolate cuisine you’ll ever have the pleasure to encounter.  The Gingerline-Godiva banquet runs September 26-29 and you have to enter the ballot to be in with a chance of going. Find all the details here.