SF draws surfers of all types—from the hardcore set hitting the waves at Ocean Beach before most of us have had our morning coffee, to beginners and enthusiasts looking for a more mellow ride in Pacifica, Half Moon Bay and Bolinas. The chain of surf shops along this section of the California coast caters to this wide variety of ocean goers, from those specializing in rentals and lessons like Nor-Cal Surf Shop to those that repair and shape the boards of the surf-obsessed, including Sunset Shapers and Alex Martins Surfboard Repair. Scout out a board, try on a wetsuit and prepare to hit the waves at our favorite Bay Area surf shops.

RECOMMENDED: The best things to do in San Francisco 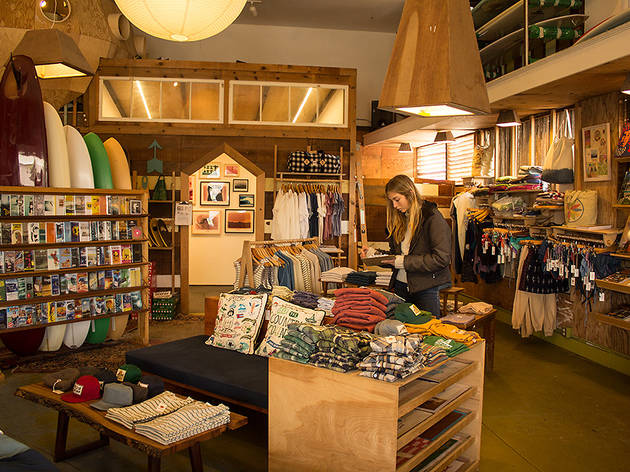 Opened by husband-wife team John McCambridge and Johanna St. Clair over a decade ago, this artsy-cool surf shop is still one of the best places in San Francisco to find boards, gear, clothes and sundries like surf zines and sunscreen. The whimsical bi-level space in the Outer Sunset is decked out in colorful area rugs, globe paper lanterns and tree-houses by local designer Jay Nelson. Among their wares, you’ll find hundreds of boards by shapers like Christenson, Campbell Brothers, Tanner and Gary Hanel. The couple also sells their own line of in-house clothing, including tees, button-downs, board shorts and laid-back dresses. For a bargain, don't miss the room full of used boards in back. 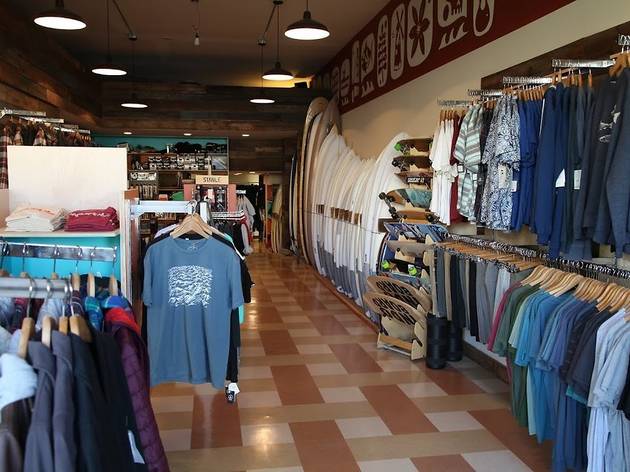 A few years back Aqua relocated from its original home on Sloat to a more lively corner of the Outer Sunset, just down the street from Outerlands and Trouble Coffee. From its salvaged wood walls and checkerboard tile floors, Aqua sells Ocean Beach-ready clothing—hats, tees, flannel button-downs and lightweight down puffers. Their staff, a team of hardcore local surfers, can help you choose from a wide selection of new and used boards from Bic, Surftech and Boardworks. If you’re not quite ready to buy, Aqua also offers 24-hour rentals for wetsuits and boards. 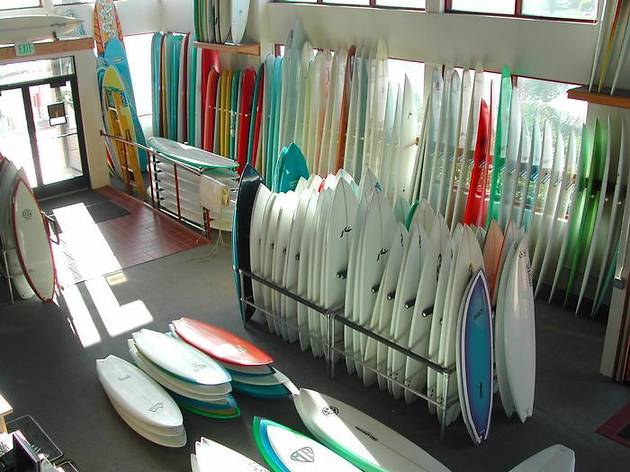 Bob Wise started surfing the bracing waters at Ocean Beach in the ‘60s; by ‘68, he had launched is own shop on Wawona—a place to shape and glass the boards of his surf buddies. Though Wise has since expanded and relocated to the other side of the park, Wise nonetheless has earned the distinction of owning San Francisco's oldest surf shop. The Cabrillo Street store, which sprawls across three stories and overlooks Ocean Beach, has a well-appointed inventory of boards including those by Surftech, Firewire, Torq, Lost Surfboards and many more. The spot is particularly known for its range of wetsuits from the likes of O'Neill, Rip Curl, Body Glove and Xcel, as well as an impressive array of boots, hoods, gloves and rash guards. Thanks to the generous size of the store, Wise stocks plenty of extras, like GoPro waterproof cameras and surfboard travel bags, that you won't find at nearby surf shops. 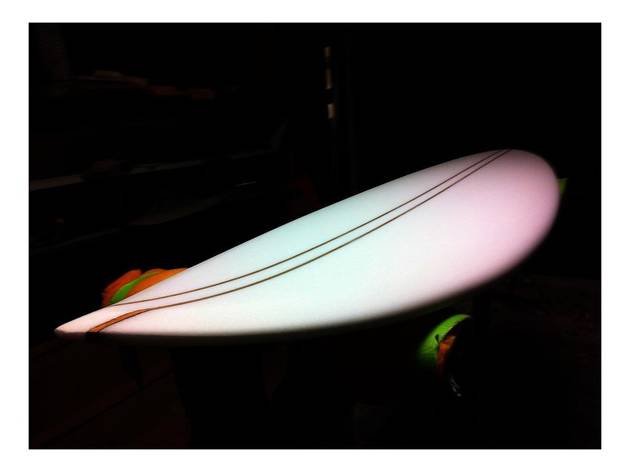 Blink and you might miss this minuscule Noriega St. board shop, often obscured by the line for the Devil's Teeth Bakery next door. Crammed in at the back, shapers Gordon Guptill and Chase Davenport glass boards, repairs dings and offer one-on-one board shaping lessons for particularly hands-on surfers. Up front, you'll find a short row of boards for purchase or rent, wax, and accessories for both surf and skate. 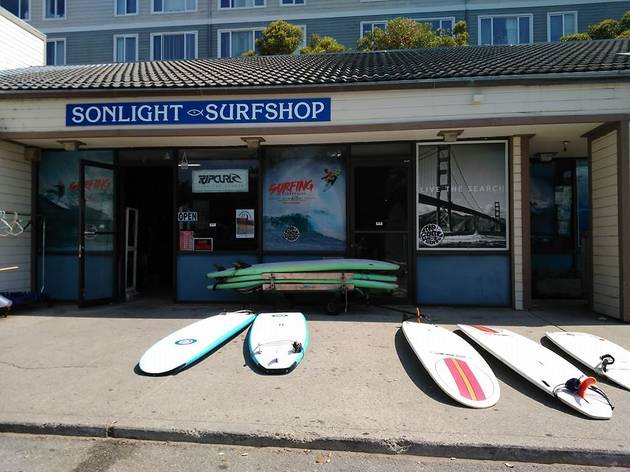 Dan and Robin Moreno opened this friendly Pacifica surf shop in 1985, where colorful boards hang from the ceiling. Conveniently located just off Linda Mar Beach, Sonlight is an excellent source for experienced wave carvers and beginners, alike. The space is small and crowded but orderly, packed with an extensive selection of surfboards by Arrow, Harbour, Linden and more. The racks include wetsuits, accessories (fins, leashes, ding repair kits) and clothing by Rip Curl, Quicksilver and Patagonia. Wetsuits, surfboards, bodyboards and booties are also available for rent andt their wetsuit trade-in program is great for growing kids. For serious dings, Sonlight can provide speedy, affordable repairs. 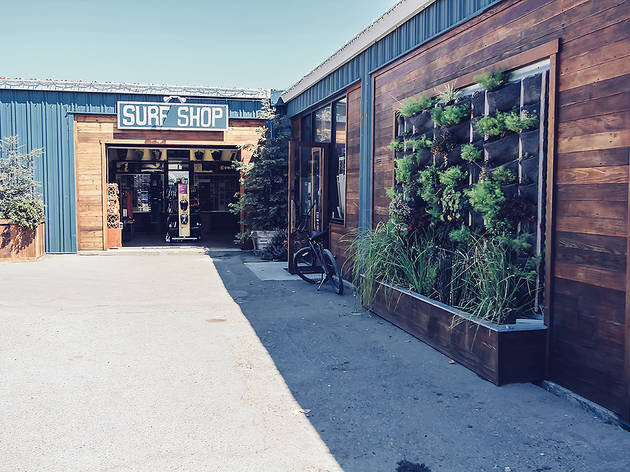 The hip Proof Lab near Bolinas is part surf and skate shop, part coffee shop, all folded into a spacious 10,000 square-foot-plus warehouse near Bolinas. Relative to most mom-and-pop surf shops, the Proof Lab is downright luxurious with a full-size skate ramp, and endless rows of boards from brands like Firewire, T. Patterson and Stewart, and and wetsuits of all weights and sizes. The original storefront, a former gas station (once the shop’s only retail space) contains a selection of basics including button-downs, henleys, chinos and sweats by RCVA, O'Neill and more. Whether you’re in the market for new gear or not, grab a coffee and kick back on the sunny front patio. 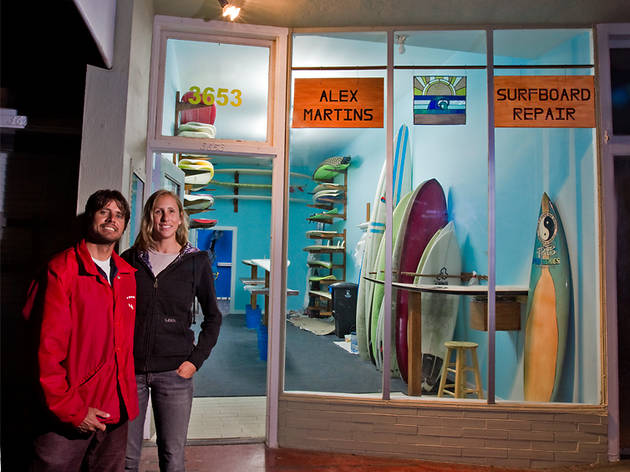 Husband and wife team Alex and Sarah Martins, a former professional surfer and a former surf instructor, are at the helm of this narrow, blue-hued repair shop. Together, they meticulously color-match and repair fiberglass, epoxy and wood surfboards with environmentally conscious materials like VOC-free resin and repurposed supplies. Alex is a master of his craft, specializing in ding repair and though they accept a limited number of boards each week, all of their work is guaranteed with a wait time of typically only two to three weeks. 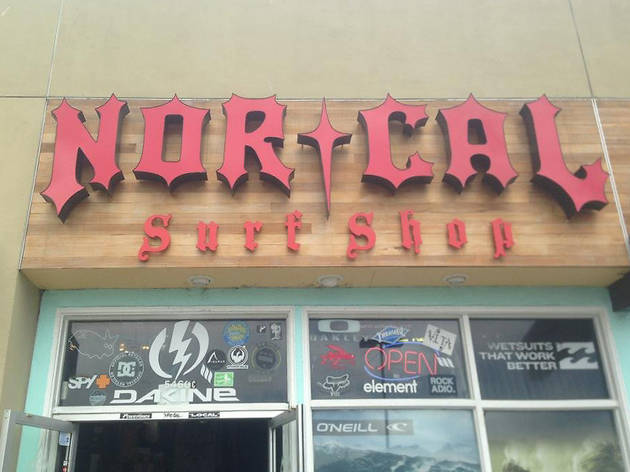 Founded by childhood friends Shawn Rhodes and Greg Savin back in the early ‘90s, Nor-Cal has become a beloved Pacifica fixture. The spot is known for its inexpensive surfboard, paddle board, bodyboard and wetsuit rentals, conveniently offered in full- or half-day rates (starting at $12 for wetsuits and $14 for surfboards). Their four patient surf instructors provide both private and group lessons. More seasoned surfers will find plenty of boards for sale (of both the surf and skate variety), along with a wide array of popular Nor-Cal-branded tees, hoodies and hats. 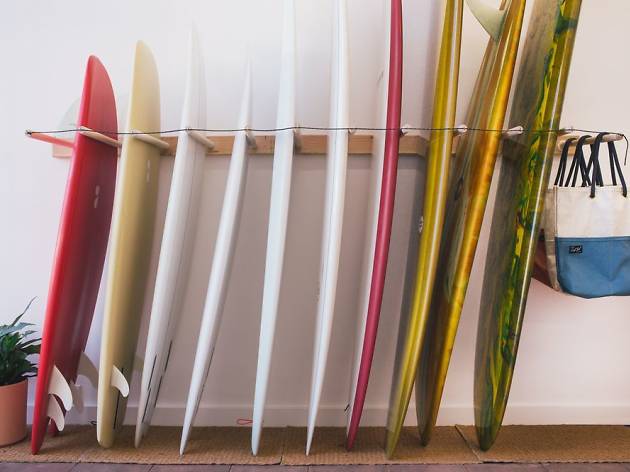 It may be miles from the nearest surf spot, but this minimalist Oakland boutique is quickly making a name for itself in the Bay Area and beyond (their products are sold at dozens of shops in Japan). Oakland Surf Club specializes in custom tees, hats and boardshorts, which are sold alongside a small, curated collection of boards from Trimcraft, Daily Shred, Grote and Mangiagli. It’s a more considered approach to surf style, one that despite its trendy design, is laid back enough to “suit” any surf aficionado.