If you carefully explore the area between Seongsu Station and Ttukseom Station, you might discover your new favorite hang out spot when you least expect to.

Written by
Hye Won Kim
Tuesday August 23 2016
FacebookTwitterPinterestEmailWhatsApp
Advertising
With Seoul Forest Station in the middle, the residential quarter of Seongsu-dong is to the left of it. Ever since upscale high-rise apartments started being built here in 2011, it has been the district to be in. Starting from 2014, when social venture corporations, social enterprises and young designers started settling here, the neighborhood has taken on a new vibe. The Seongsu-dong that is often mentioned by Korean millennials on social media refers to the area to the right of Seoul Forest Station. It’s one of the few semiindustrial areas left in the city and is home to a wide spectrum of industries, such as shoe factories, car repair garages and printing houses. Seongsu Handmade Shoe Street is also located here. Recently, this neighborhood has earned another name—“Café Street.” Gallery CO:LUMN, which opened this past May; Orer; and Zagmachi, which has been around for quite a while, have attracted new customers to this neighborhood. 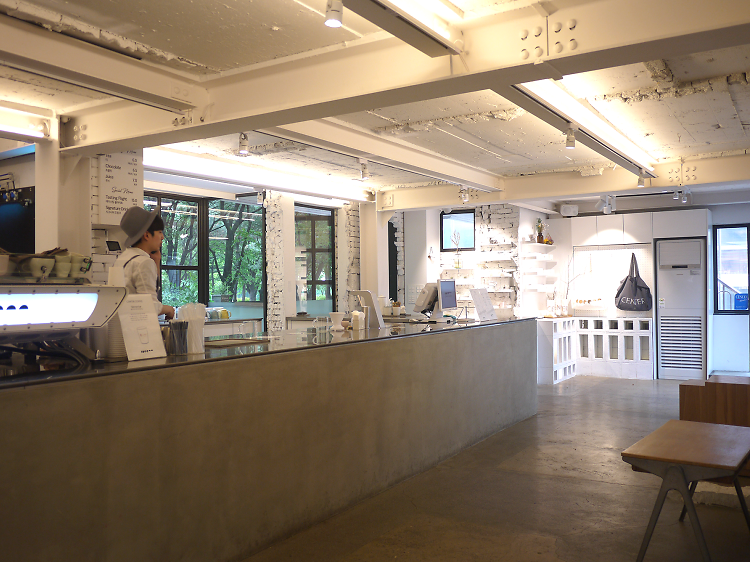 What’s going on in Korea’s coffee scene? There’s certainly a visible momentum observed here especially with Seoul’s professional baristas. Take, for example, Sang-ho Park who was the champion in 2013 UK Brewers Cup and 2015 Coffee in Good Spirits, and one of the world finalists in both competitions. Prior to starting his own consulting company Spark Coffee Consulting, Park served as the Head of quality and roasting for East-London's Square Mile Coffee Roasters. Last February, this impressive barista, entrepreneur and Master’s graduate in Sensory Science opened up shop in Seoul around the Ttukseom area. Set up in a fully-renovated former residential complex standing at the entrance of Seoul Forest, the café itself isn’t all too spacious.  But with a polished interior and undoubtedly great coffee, Center Coffee has quickly become the go-to spot for coffee enthusiasts in the Ttukseom/Seoul Forest area. Along with Choi Jun-ho who is one the Korea’s first-generation licensed Q-graders, Park leads the operation here as the head barista, using espresso machines and clever brewing. As for blends, El Salvador Pacas and Honduras Las Virginia’s Washed Geisha are combined to create a well-balanced texture and aroma. One particularly impressive item on the menu is the Santa Felicia Geisha K72 Processing. Geisha coffee began its roots in a Panamanian farm and was fast to be internationally recognized for its exceptional flavor profile. Coffees brewed with Geisha carry a harmonious comb
Read more 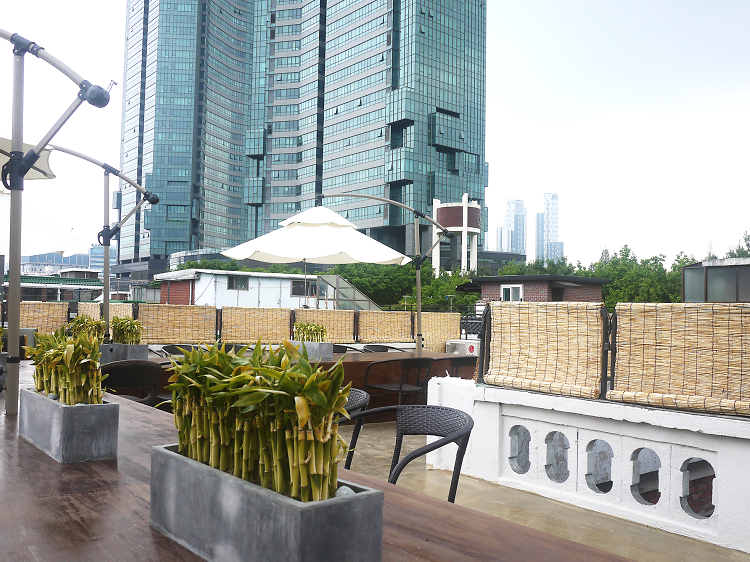 At Rose Mansion located in Seong-su, seeing someone's underwear being dried on the rooftop next door isn't all that awkward. Itself a humble old house, the charm of the café found at the end of a maze filled with old-fashioned signs and shrub roses is, in fact, the mundane, nostalgic and comforting vibes. If you're trying to get inside, though, it's not all that simple; you might end up opening every door you see and climbing up and down the staircases several times before getting your drink. What you want to look for is the wooden door that'll lead you to the counter.  Once inside, you'll feel relieved, especially if you're into cute social media things—vintage furniture, old-school chandeliers, and little novelty items complete Instagram-worthy scenes available on any angle. As for the menu, the most popular item here is the Rose Latte which has red velvet syrup in it. The "rooftop special" combining 4 types of freshly squeezed detox juices, skewers and beer offers an "interesting" yet easy choice for a group. There are now so many cafés located in Seongsu, but we have a feeling that Rose Mansion will soon be the next trendy spot in the area. After all, Daelim Changgo and Onion and all the other "Seongsu-y" are packed on weekends, and Rose Mansion will offer at least some space for you to breathe.
Read more
Advertising 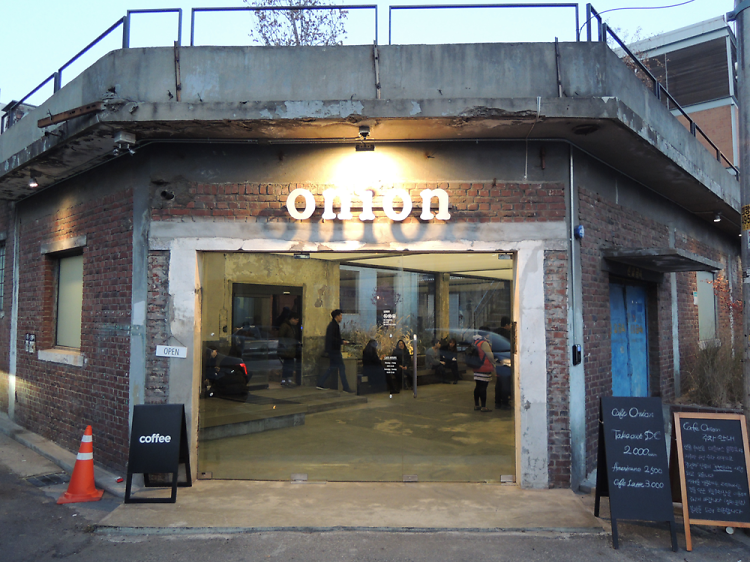 During a warmer season, the wide open rooftop terrace of Café Onion is popular spot for the trendy Seoulites enjoying coffee and the wind blowing through the area. It isn’t much of a view, actually, as the rooftop is located only on the second floor of the building. Still, it’s enough to watch the scenes filled with surrounding factories and people walking by, while listening to the not-so-distant, strangely calming tunes of that trains passing by.  The building in which the café's located has a long history of its own; built in 1970's, it was previously a supermarket, a restaurant, a repair shop and most recently, a metal factory. While the whole space has indeed been restored with ultra-modern features like wide windows, minimalistic furniture, and a well-curated garden, the café's wide-open interior retains all of its old, rustic and broken-down elements. Just like any trending spot in Seoul, Onion is often seen on the social media and usually busy with young crowds. But because it's got so much space and many available seatings, you won’t have to worry about waiting to get a table (even if you do end up waiting a little, there's a bit of atmosphere you can enjoy in the meanwhile).  Their most popular drink is the Flat White. It might not be as strong as you'd expect, but it's certainly smooth. There are also good pastries, which are all made in-house, at the newer branch of Bread 05 located on the second floor (many of those who stop by the café are only here to pick up
Read more 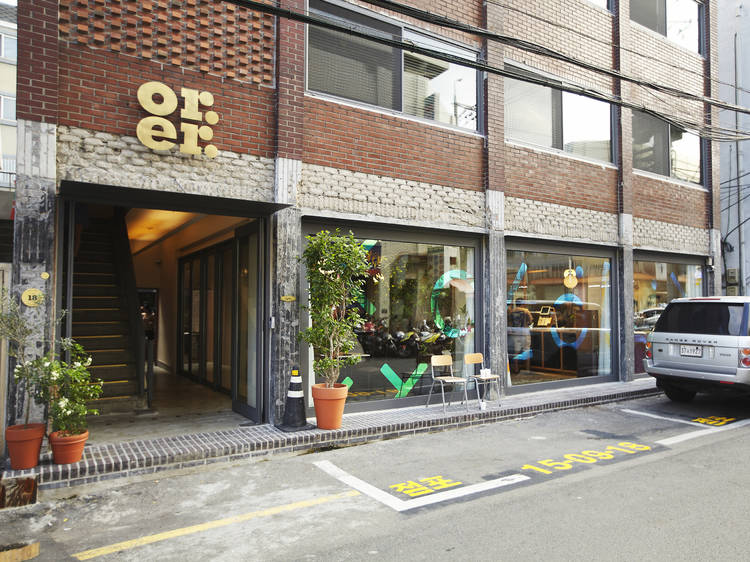 This café is Zagmachi’s second branch, and it opened this May. People in the neighborhood are almost amazed by the young, well-dressed groups of people who visit this spot. Orer’s wooden furniture, curtains and wallpaper somehow make the café look like a home from the ‘70s or ‘80s. But Orer’s greatest appeal is its garden. A team of staff, who used to work for Aus Petits Verres, a famous tart place in Seochon, is in charge of creating the café’s desserts, which are sublime. Now that the heat of summer has somewhat abated, you can enjoy coffee and cake in their garden, whilst listening to classical music. At the moment, the basement of the building is serving as a gallery and the first floor as a café. There are plans to host exhibitions, speeches and seminars on the second floor in the near future.
Read more
Advertising 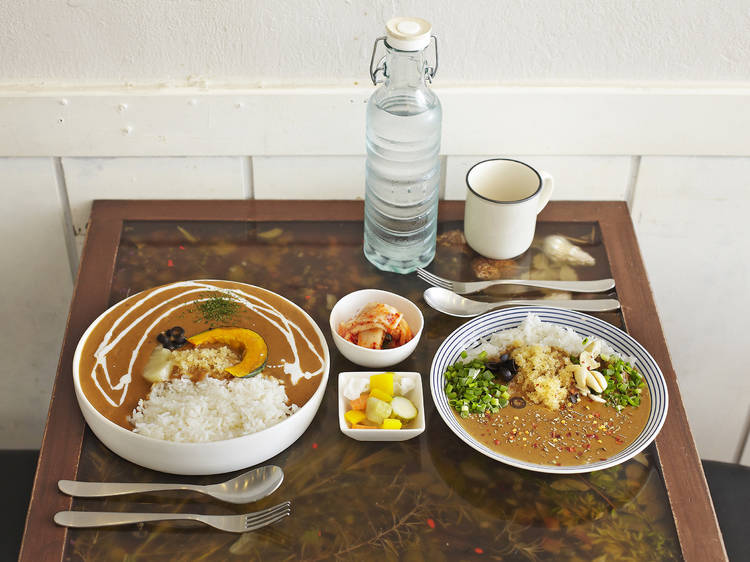 The owner of the restaurant enjoys scuba diving and carries some serious love for Jeju in her heart. Located in an arcade next to an apartment complex, and away from the bustling industrial areas of Seongsu-dong, it is a simple, comfy curry eatery. She first started her business when she started selling her curry at Bellongjang Market while she was staying in Jeju, and her friends recommended that she sell it. Spicy cheongyang littleneck clam curry, which has stayed on the menu since its non-commercial inception, is what she often made for her friends as a hangover dish after a night of drinking. The owner humbly said that she was surprised to see her curry sell out so quickly at the market. Once you taste her dishes, you’ll understand why her friends told her that she should sell her food.
Read more
Show more 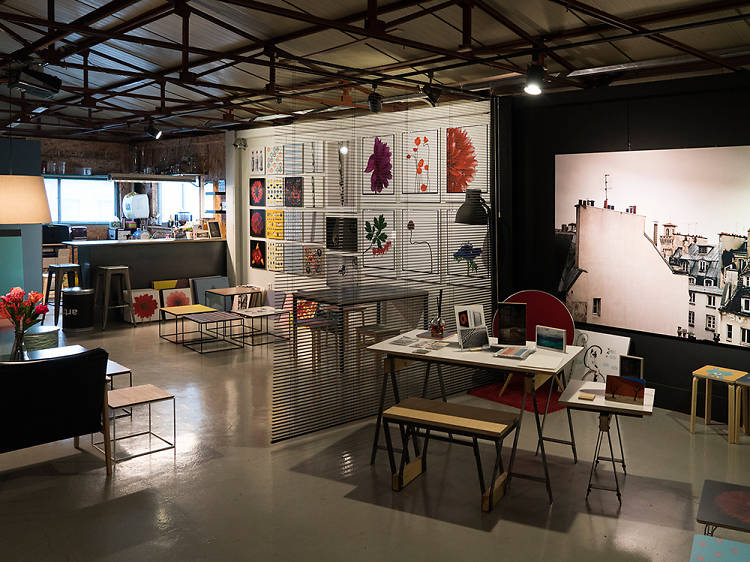 Ever wanted to have a photo you took with your DSLR printed in professional quality, perfectly framed and hung on that empty wall of yours? Hidden in the factory district of Seongsu-dong, Lamina (from the word laminate) is best described as a private printing and framing workshop, and is actually providing services to many local photographers. Opening the large iron doors, you will be mesmerized by the sound and smell of a woodshop. It is recommended you take a quick walk to see the inner workings before heading up to the showroom on the third floor. The company first ventured out with their frameless picture frames which have now become their specialty. Customers can bring in their digital files, choose from a variety of paper and high-grade acrylic (both from domestic and foreign manufacturers) all available in the showroom, and have their frameless frame created in whichever size they desire. As Lamina mainly caters to large brands and photographers, they won’t be providing any photo editing services, so make sure you bring in the perfect shot. The showroom is also a space to purchase pre ‘frameless’ framed pictures with friendly prices starting from 50,000 won. Although this part of the company is different (named Arty Goodthing), they work under the same roof and is operated by the same director. As the director has worked with respected Korean photographers (including Kim Jung-man, An Woong-chul and fashion photographer Park Kyung-il among others), it will be a chance 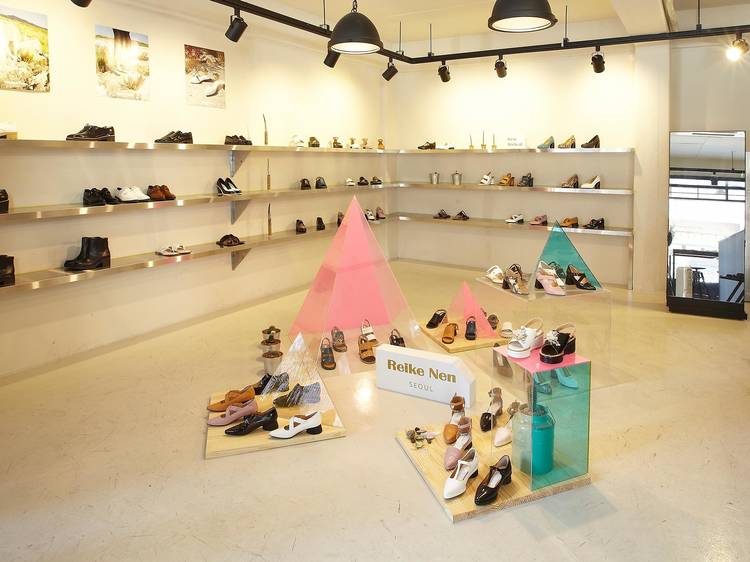 Yoon Hong-mi, who used to work as a shoe designer at Handsome, launched this handmade shoe brand in 2010. Reike Nen’s shoes have simple and soft lines without overly flashy decorations or colors, which means that they go well with any outfit. The soles of the shoes match their overall designs and you can have your shoes custom made. Their shoes are more than just attractive—they are comfortable.
Read more
Advertising 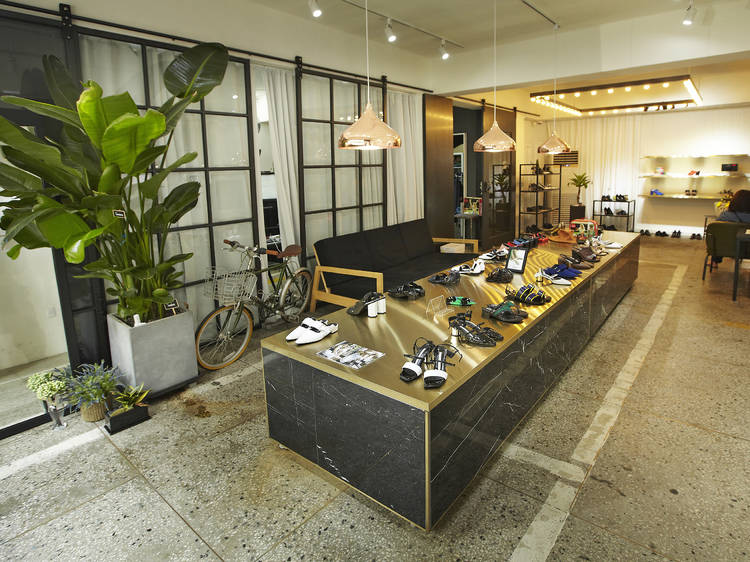 SALONDEJU, launched in 2014, is a shoe brand for women led by designer Ahn Seong-ju. They sell their products online as well, but this showroom is the only place where you can actually try on their footwear. They are famous for reinterpreting classic styles in modern ways, such as red or teal shoes that are designed in a simple and feminine manner. As the products are made to order, it takes about two weeks for them to be ready. 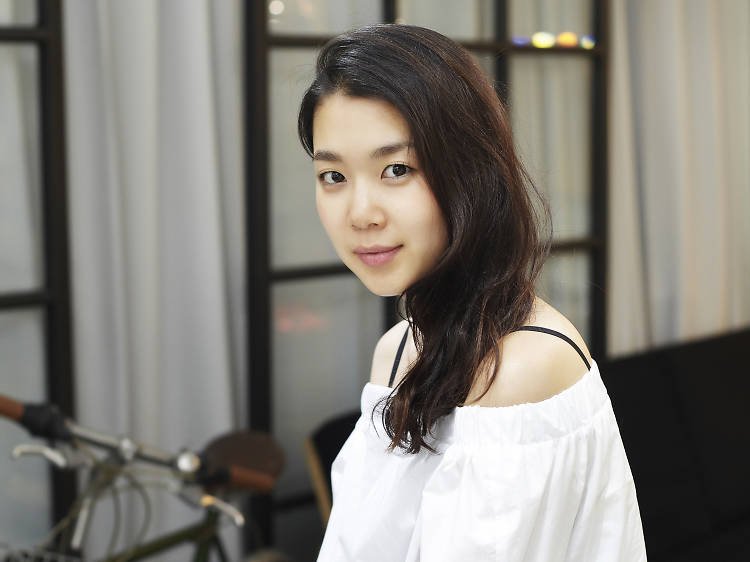 There are a lot of shoe and leather factories in Seongsu-dong. Since I design shoes, I visited here often, even before I opened a showroom in the neighborhood. I believe that the atmosphere of the area has gotten younger, as I see more and more young people and cafés. 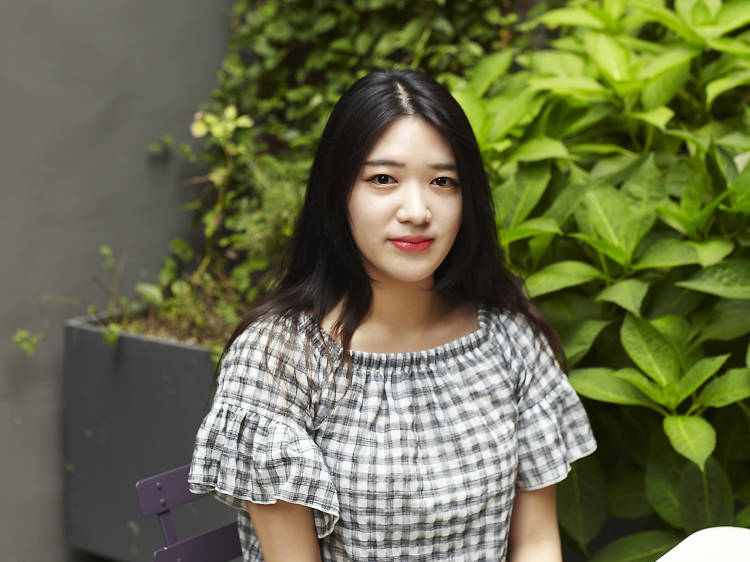 I first came here because my friend told me that there are a lot of pretty cafés here. I was attracted to or.er the most because I heard that it was like a garden. Because it’s named Café Street, I thought the cafés were lined up on one street. It’s interesting to see a café like this hidden between the alleys and arcades. I would love to come here with my mom, and I like that it is not too crowded during the week.
Show more