Written by
Sungchan Park
Wednesday July 27 2016
FacebookTwitterPinterestEmailWhatsApp
Advertising
TIMEWORN, OIL-STAINED FACTORIES; Seun Arcade, where vendors sell videocassette porn from the shadows; and old run-down stores... On Euljiro, once a symbol of Korea’s modernization, time now seems frozen in the ‘70s and ‘80s. During its golden age, this central Seoul thoroughfare was such a hive of industry and commerce that you could even, so the joke went, have a tank built there. But since Seoul’s economic heart shifted south to Gangnam, Euljiro has become almost foreign to younger Koreans, even those born and raised in Seoul. Now, however, the tired giant is stirring once more. The capital's nomadic
artists, always on the lookout for cheap studio space, have begun moving into Euljiro's aging buildings, accompanied by the usual hipsters and their quirky cafés, bars and record shops. Meanwhile, old restaurants that have been feeding the area's working classes for years have shown up on the media’s radar, bringing in fresh stampedes of hungry visitors. Head here to experience the coexistence of 2016 and the 1970s. 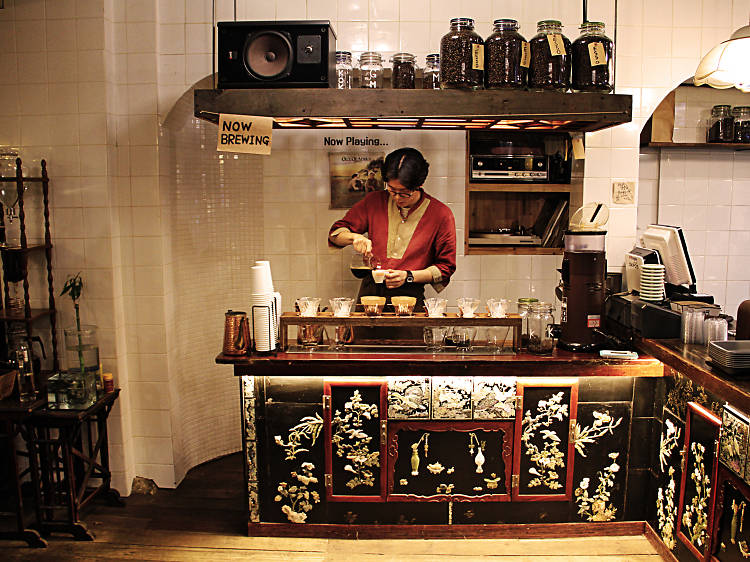 How did anyone fit a coffee shop in such a small alley? Hiding amongst the shabby buildings in Euljiro, this coffee shop is decorated like a dabang (Korean coffee house) from the Japanese colonial period. One small step through the door is effectively one giant leap back 90 years or so. The wooden floor creaks with every step, the counter is inlaid with mother-ofpearl and there’s even a hand coffee roaster. Make sure you try out their signature menu item—strong hand-drip filter coffee brewed by the barista with all the meticulousness of a pharmacist decocting herbal medicine. 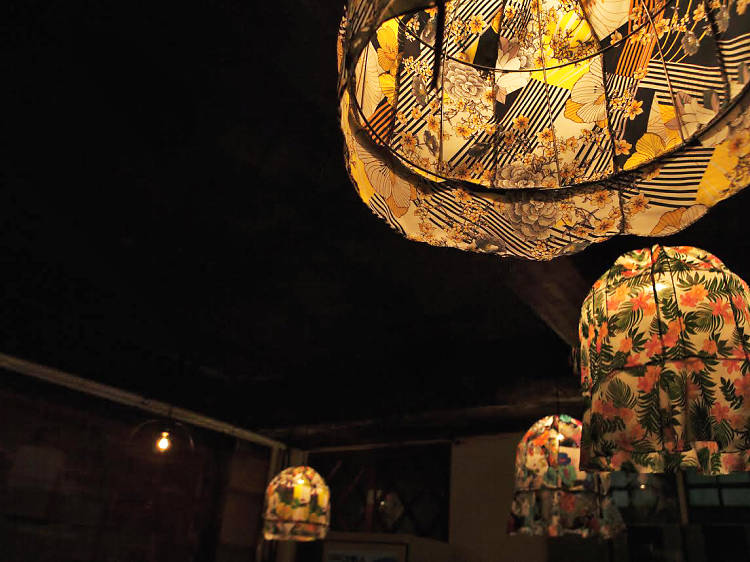 First of all, this is not a hotel. It’s a café that sells tea, beer, wine and more; a workroom for three designers, and an integrated cultural space that holds exhibitions and concerts. Louise Park, director of Ikseon-dong café Sikmul, designed the interior by combining images conjured from two words—the modern, Western nuances of “hotel” and the narcissus flower (soosunhwa), symbolizing the status of Euljiro as the classical center of Seoul. Just as the combination of these two words creates a unique atmosphere, the café itself strikes an exquisite harmony between East and West. Floral-patterned lampshades, Asian flower paintings, mother-ofpearl tables and the café’s ethereal ambience will have you reaching for your camera. 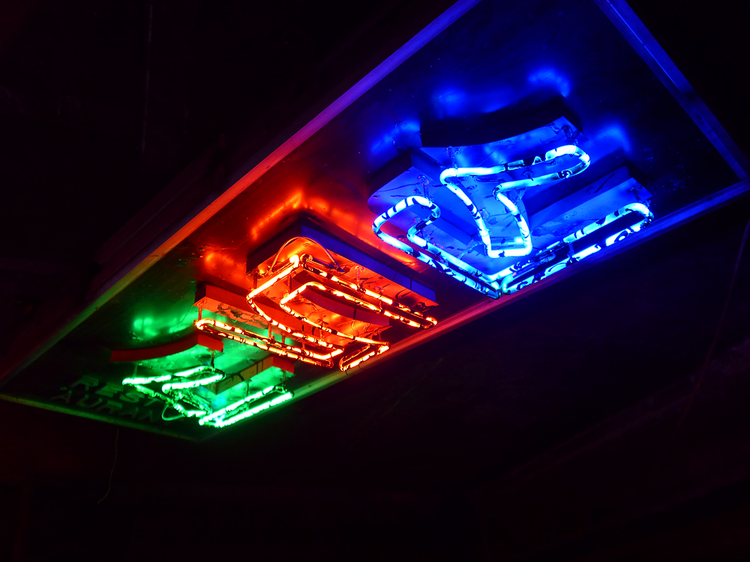 Located on the 5th floor of a rundown building resting on an old and gray alley of Euljiro, Seendosi transports anyone visiting the strange venue to the 1980's Seoul. Inside, deliciously tacky neon signs decorate the walls while pieces of vintage furniture accommodate the chicest hipsters in town. Formerly an electronic technicians' school, this bar and lounge has been picked up and refurbished by photographer Lee Yoon-ho and multimedia artist Lee Byeong-jae. During the day, it is used as a coworking space for freelancers and at night, it is filled with interesting parties organized by the two arty owners. 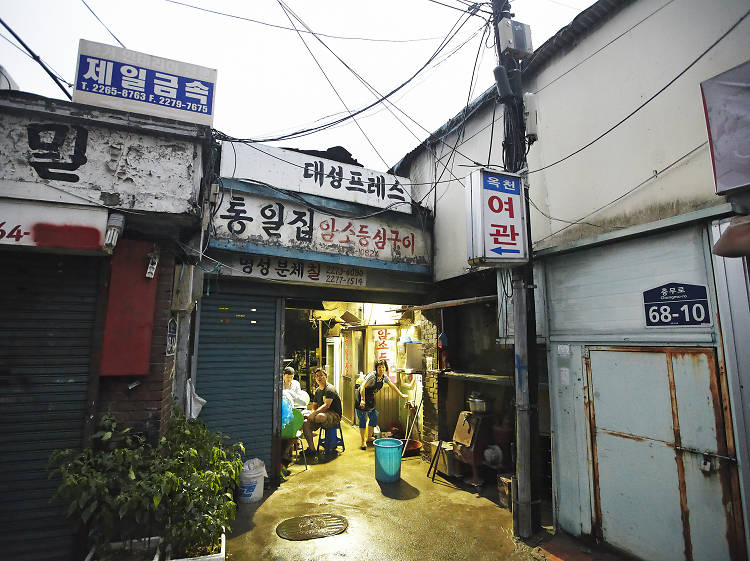 This almost four-decades-old restaurant takes you straight back to 1969, the year it opened. Formerly, its clientele was local welders and factory workers, turning up to sit around oil drums, grill chopped beef and drink soju at the end of a long day's work. After a wave of publicity through TV shows and blogs, however, businessmen in suits have become the main customers. The only main dish on the menu, heifer sirloin, costs a rather pricey 32,000 won per serving. This is not the most comfortable place to eat and the service may not be the greatest, but the atmosphere definitely beats any other meat joint in the city. 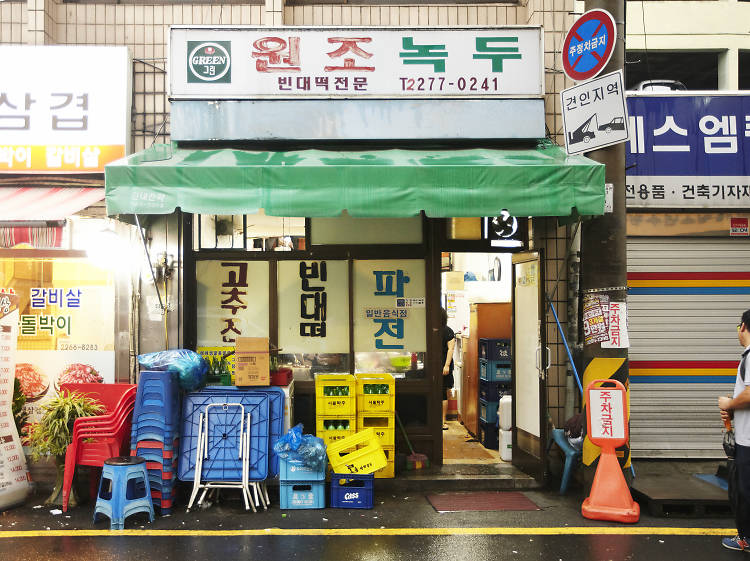 An old couple from Jeonju opened this restaurant in 1971. It now serves 13 different kinds of jeon (Korean-style savory pancake) including nokdu (mung bean), pepper and meatball. Choose meat or seafood or oysters to go in your nokdu jeon and enjoy the simple, light fare for which this place is famous. The pepper jeon is a must-eat with a thin layer of flour batter spread on the pan, topped with spring onions and then topped again with a generous spread of chili pepper and pork. For the finishing touch, they add an egg and fry it some more. The fried meatball jeon, packed with tasty meat, is another signature item. 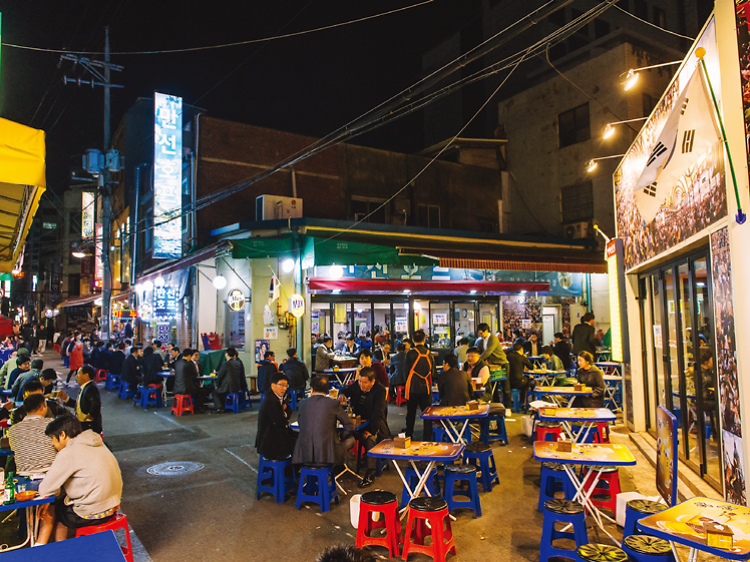 Euljiro's Nogari (dried pollack) Alley, with its dozen or so pubs, is one of Seoul's top attractions, becoming crammed with thirsty hordes every evening. The biggest pub of all is Manseon Hof, also known as “Oktoberfest in Korea” and purveyor of more beer than any establishment in the country. As soon as you get a table you'll be served draft beer and nogari without even having to order. Nogari only costs 1,000 won and with draft beers going for just 3,000 each, this is a very light night out for your wallet. 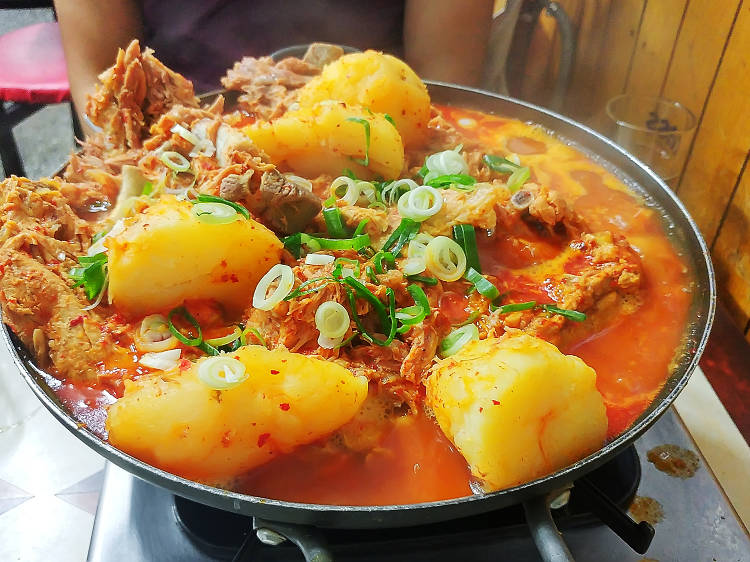 The most popular dish here, gamjaguk (potato stew), costs only 7,000 won. This ddukbaegi pot full of delicious pork bones and potato is what we already know well as gamjatang (pork bone stew). Meanwhile, the steamed pork and sundae (Korean blood sausage stuffed with noodles) and other dishes here will help you plough through multiple bottles of soju without even realizing. If you start to get drunk, try the sundaeguk (sundae stew), a simple dish with great hangover-busting properties that's made with more pork head and small intestines than sundae. 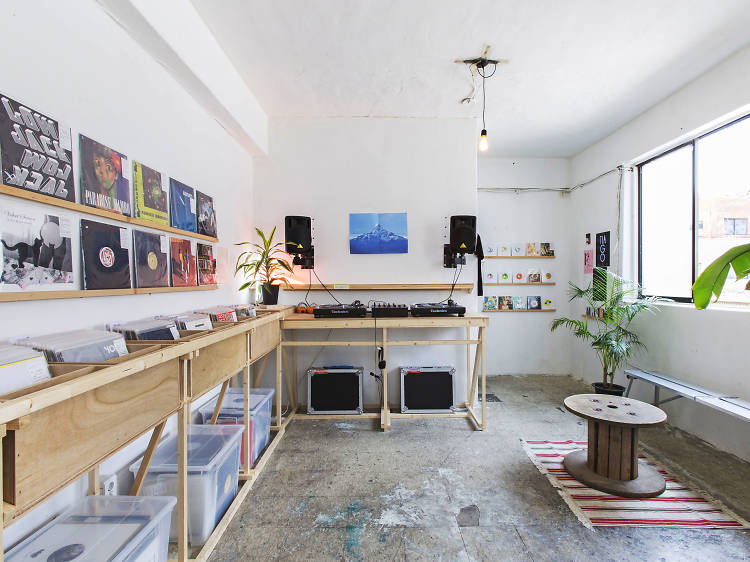 This record shop, hidden in a back alley like most stores are in Euljiro, is unique in that it offers underground dance music by independent record labels from all around the world. Most of its LPs and cassette tapes are selected by three different DJs, creating a collection full of music from various genres, including house, techno, disco and new wave. Though it’s only open on the weekends, you can purchase music via its online store or listen its hip music on SoundCloud.(soundcloud.com/cliquerecordseoul) 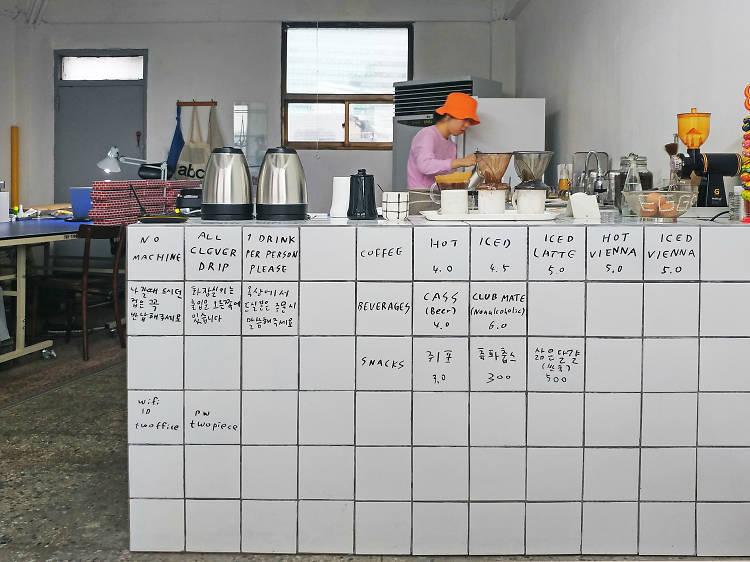 This café-slash-design studio is more simple and laid back than glamorous. Take the stairs all the way up to the fifth floor to discover a café interior devoid of flashy elements and where listening to dreamy music while looking out at Hunryeonwon Park through the window leaves you feeling strangely calm. Since everyone here was having Vienna coffee, I tried one myself—its soft, sweet cream was so tasty that I finished the whole cup in no time. They also display works by up-and-coming artists up on the rooftop.

Korean stationery stores stock for kids who've just been given their pocket money. Five friends, including an artist, a designer and an editor, own it. They sell odds and ends such as videos, toys, magazines, LPs and even old photos of actress Kim Hee-sun. There are so many products here that it'll take you forever to go through everything. Too bad they're only open Thursday through Sunday. You can use your credit card if you're paying 5,000 won or more. 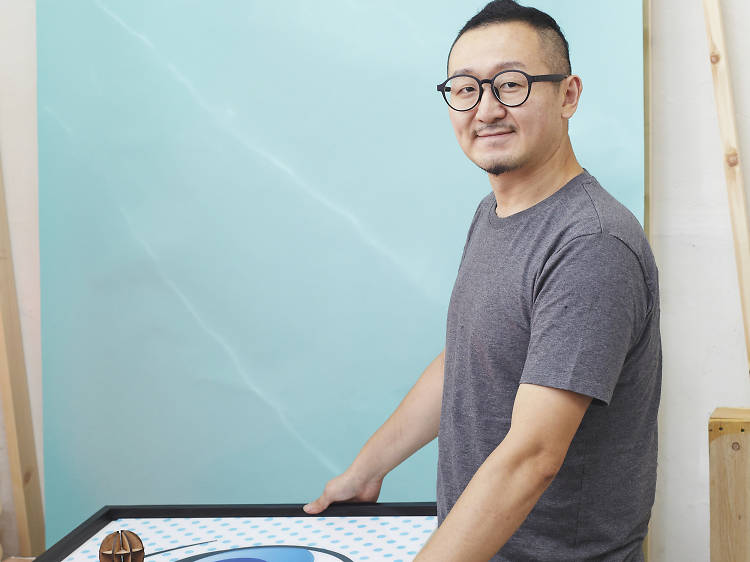 Euljiro is full of closely packed industrial workshops and shopping districts dealing with interior design, lighting and tools. It offers great access to a variety of materials—it’s the best area in the world for artists to work. It would be rather inconvenient to have offices here because of the loud noises coming from the industrial streets and the deteriorating buildings. But that makes the rent cheap. And I love being close to other artists’ studios too! 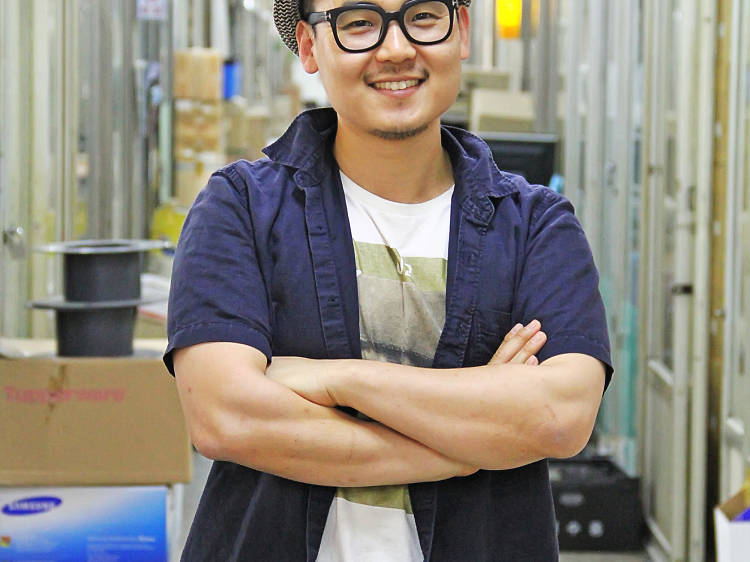 I’m familiar with the area because I came here often to buy materials when I was a student. I still get a lot of help from storeowners as well. A lot of artists, including me, are flocking to Seun Arcade, which really has a unique atmosphere and cheap rent. But it doesn’t necessarily fit the lifestyle of artists, per se. It limits my activity because it closes in the evening and on public holidays. But it's also good to follow the rules here and have a regular daily routine.
Show more