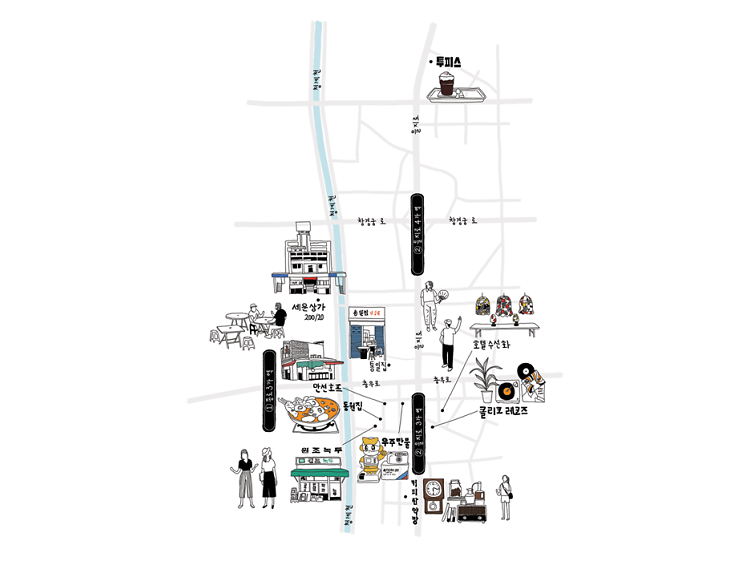 TIMEWORN, OIL-STAINED FACTORIES; Seun Arcade, where vendors sell videocassette porn from the shadows; and old run-down stores... On Euljiro, once a symbol of Korea’s modernization, time now seems frozen in the ‘70s and ‘80s. During its golden age, this central Seoul thoroughfare was such a hive of industry and commerce that you could even, so the joke went, have a tank built there. But since Seoul’s economic heart shifted south to Gangnam, Euljiro has become almost foreign to younger Koreans, even those born and raised in Seoul. Now, however, the tired giant is stirring once more. The capital's nomadic artists, always on the lookout for cheap studio space, have begun moving into Euljiro's aging buildings, accompanied by the usual hipsters and their quirky cafés, bars and record shops. Meanwhile, old restaurants that have been feeding the area's working classes for years have shown up on the media’s radar, bringing in fresh stampedes of hungry visitors. Head here to experience the coexistence of 2016 and the 1970s. 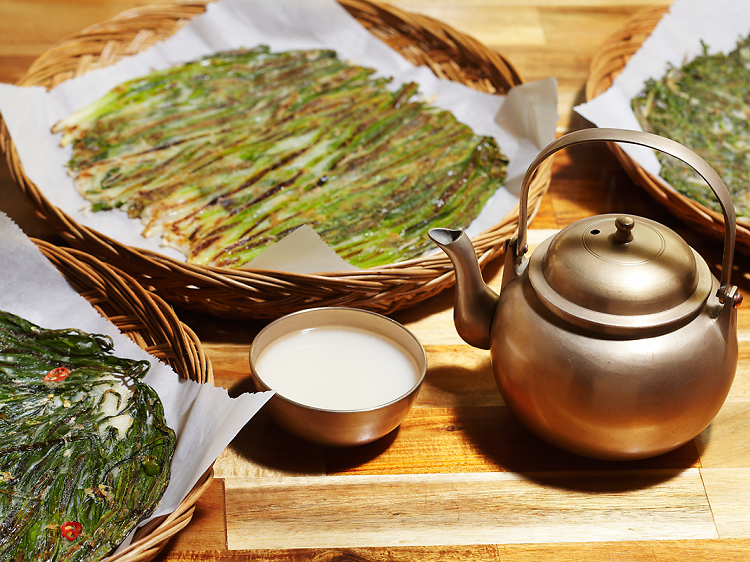 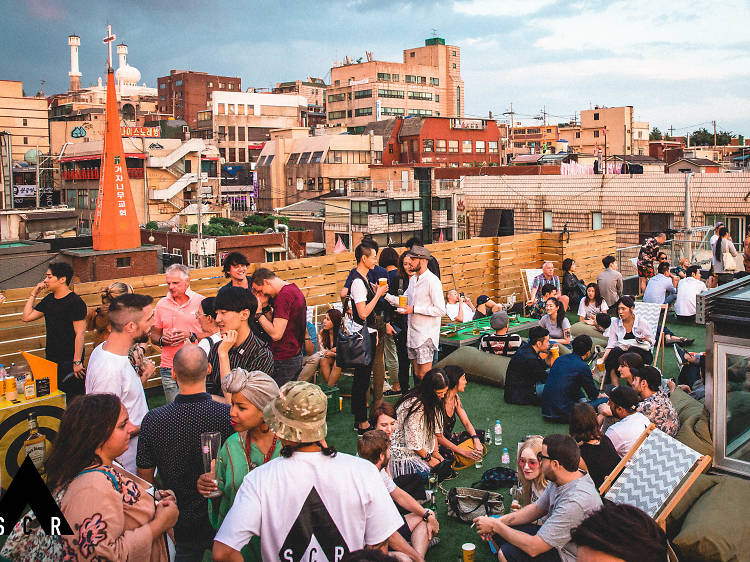 There's nothing better than drinking out in the open, on a rooftop or  outdoors. Here are the best spots in Seoul for you to enjoy the summer night breeze under the starry sky.

Traditionally made with rice, barley or wheat and naturally fermented (and sometimes flavored with nuts or fruits), makgeolli is known to be the oldest alcoholic drink in Korea. Fragrant and refreshing, this milky drink which pairs beautifully with many Korean dishes makes for an especially great choice for large gatherings during holidays. And of course, what you get at a convenient store represents only a fraction of the diverse types you can try and explore in Seoul. Whether in a traditional setting or with a modern twist, these makgeolli bars will offer an array of delectable and invigorating sips. 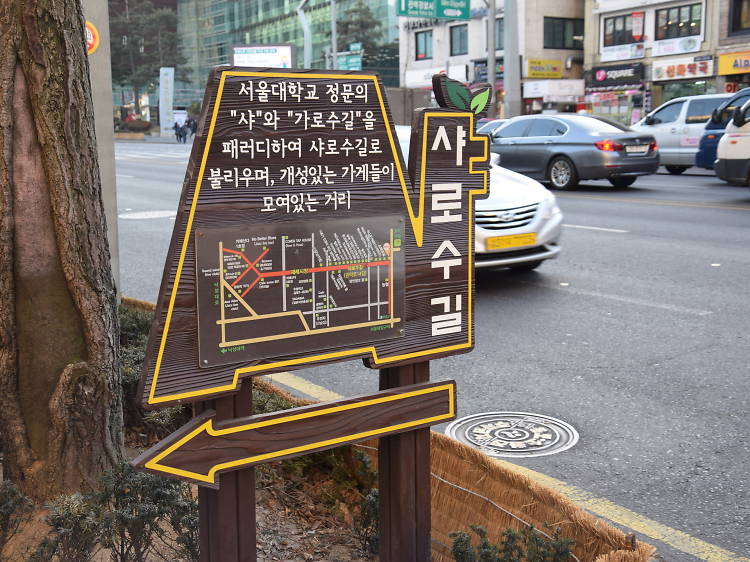 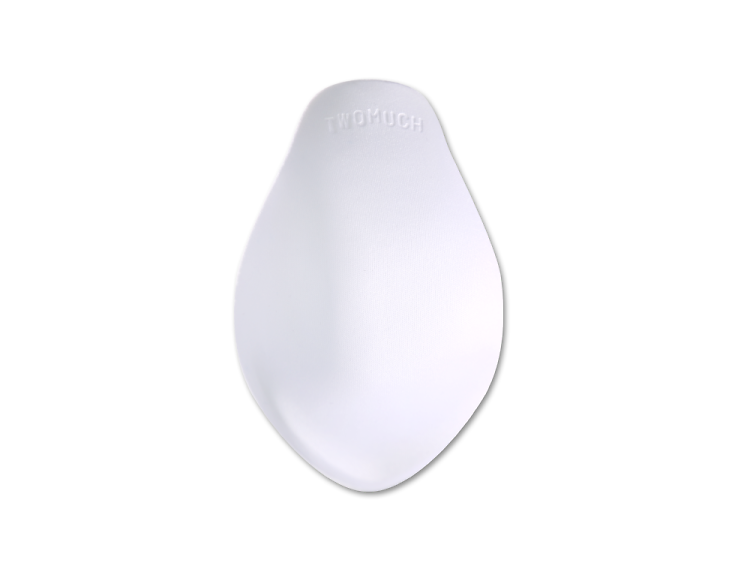 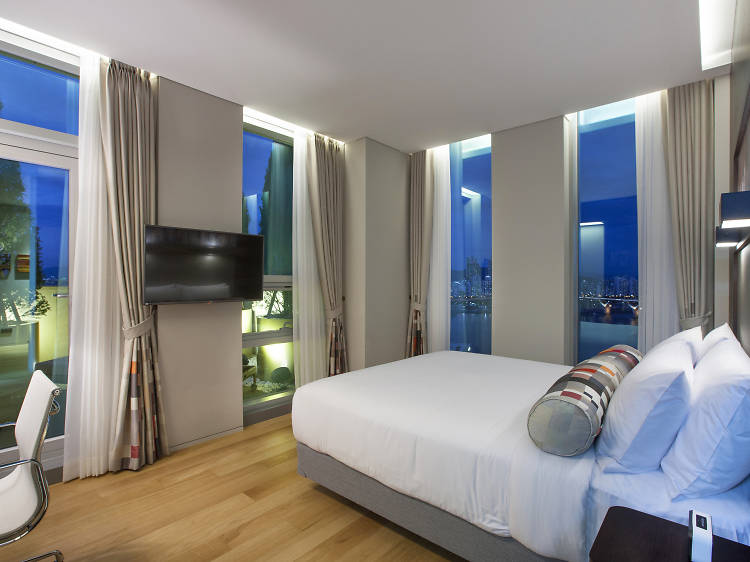 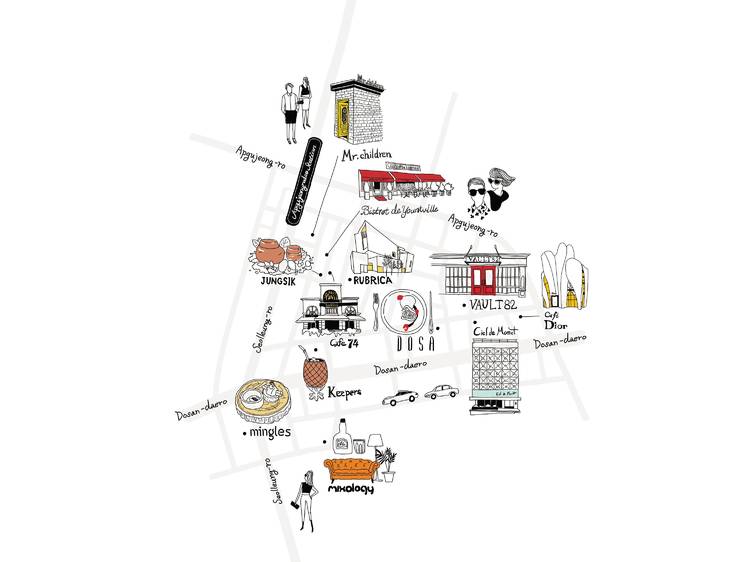 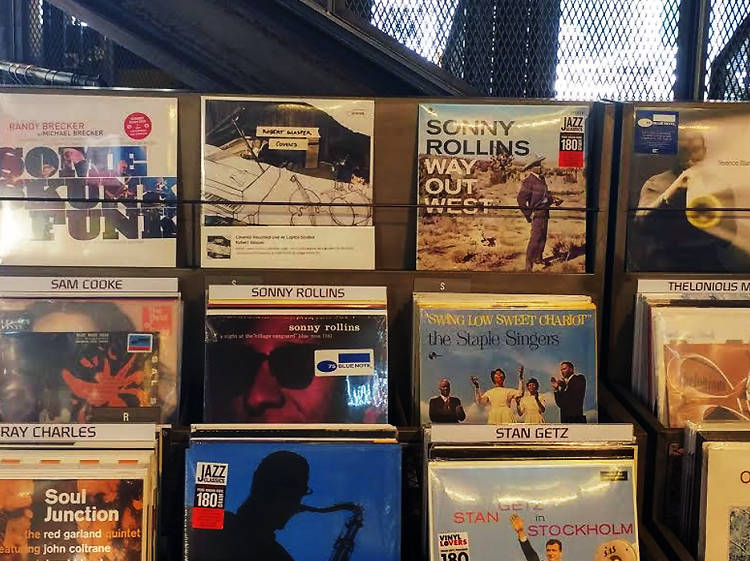 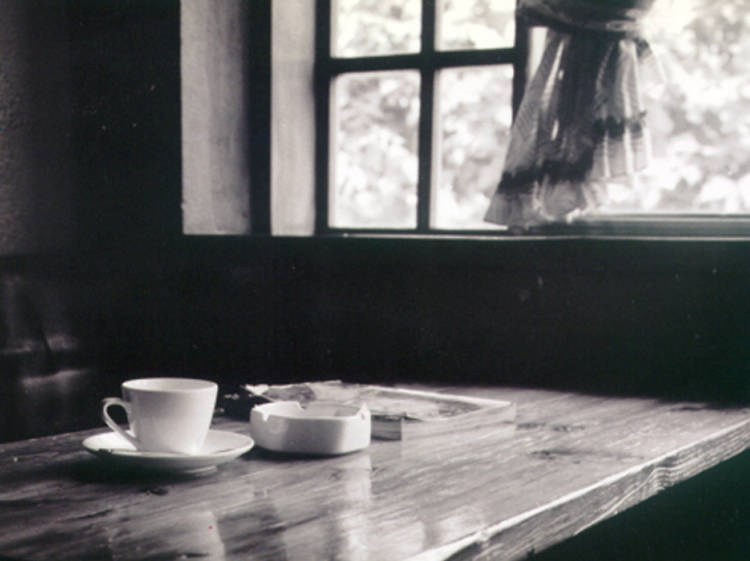 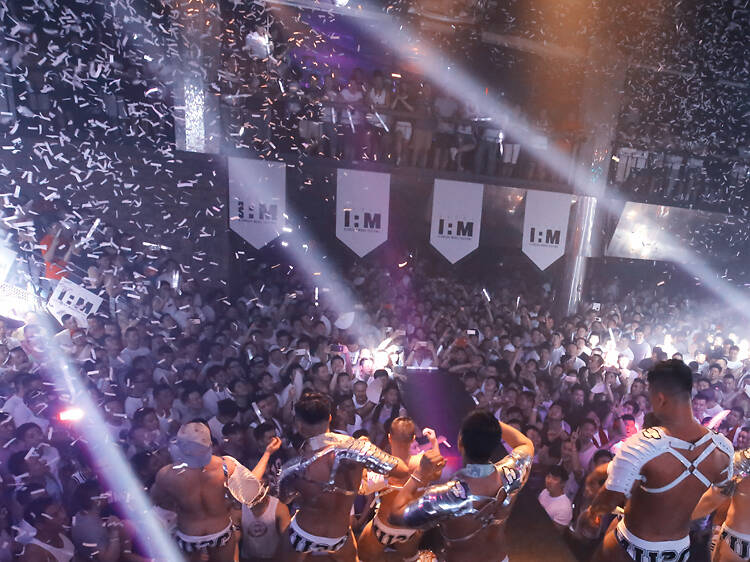 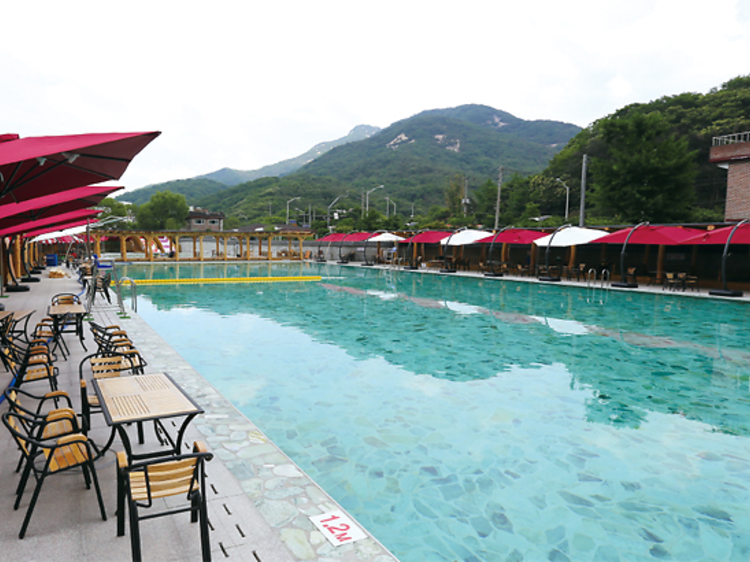 Since Cheon-yeon-ok Water Park only opened last June, the facilities are still in great shape. Located near Bukhansan, this outdoor swimming pool is surrounded by the forest. Unlike other water parks that prohibit outside food, this place has tables and power outlets set up for your cooking needs. 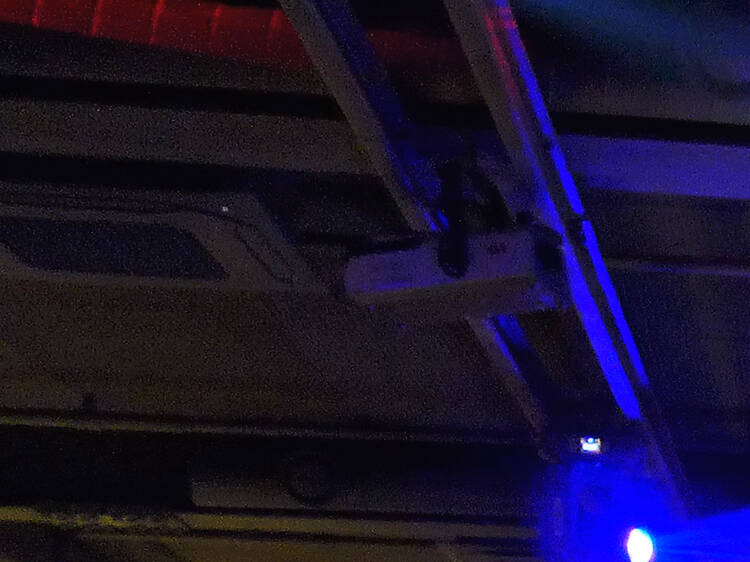 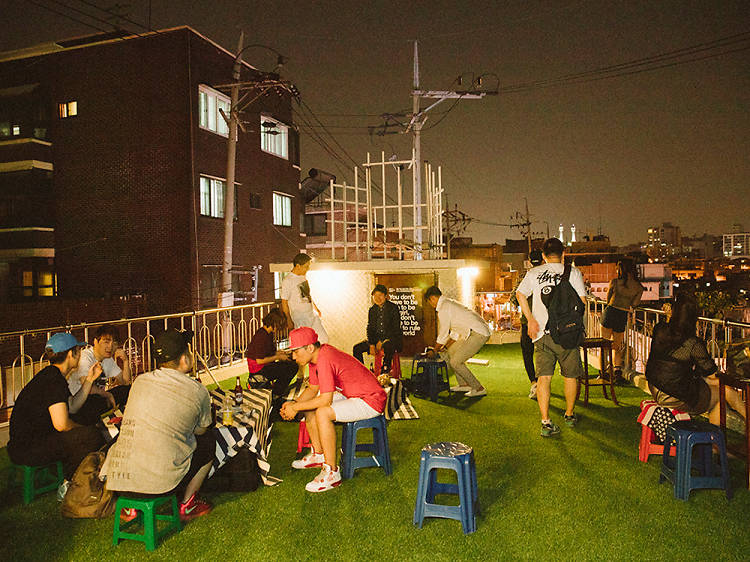 Mmm Records recently opened a shop dedicated to analog music culture, based on a private collector’s vinyl stash of over 80,000 LPs. Several listening stations are set up where you can check out their affordable LPs and 7-inch records priced from 1,000 won to about 10,000 won. The selection ranges from rare items like Korean golden oldie LPs to mainstream pop. Scattered within the store are turntables and boomboxes from the ‘80s, most of which are for sale. Dig for records indoors, or enjoy one of the best Vietnamese banh mi sandwiches in Seoul and egg coffee on the rooftop with an amazing view that stretches from the Han River to the N Seoul Tower. Seated on one of Itaewon’s highest points on Woosadan-ro, Mmm Record offers a stunning view that would most likely to make the city's top 5 list. It's comparable to what you'd find on the highrises of Gangnam—except it's much more unobtrusive. On the right side of the rooftop, you’ll be able to see Namsan, Seoul Tower and all the little buildings that make up the foothills of Namsam Mountain. The left side exposes Han River and the concrete jungle of Gangnam which looks rather charming from a distance, especially at night—the day view remains somewhat realistic while the night view transforms into something more enchanting. The rooftop is relatively low-key, with plastic chairs casually laid out and nothing much going on for decoration. And it's not at all a bad thing in the case of this attractive venue, cause your eyes will be m 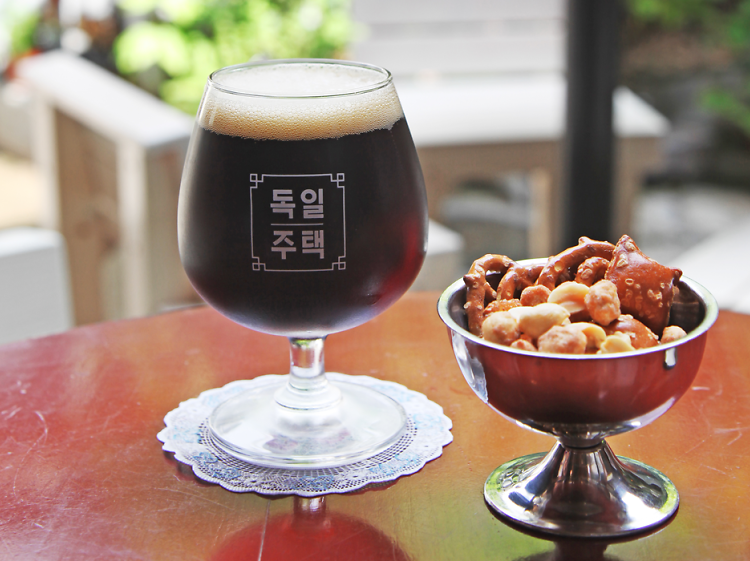 Even after numerous visits, I still get lost in the alleys of Hyehwadong, where the German House is located. Although its name suggests something else, the bar is located in a renovated hanok and sells various, unfamiliar beers from around the world. And they have explanations about different beers on the menu. For example, the Lindemans Pecheresse has peach nectar added to it and the Tripel Karmeliet has a soft yet deep taste. What sets the bar apart from others is that there are a lot of people who come here to drink alone. They enjoy their time sitting in the quiet courtyard under the sun, working on their laptops or listening to music while nursing their beers. Their Port wine is just as great as their beers so imbibe that as well. 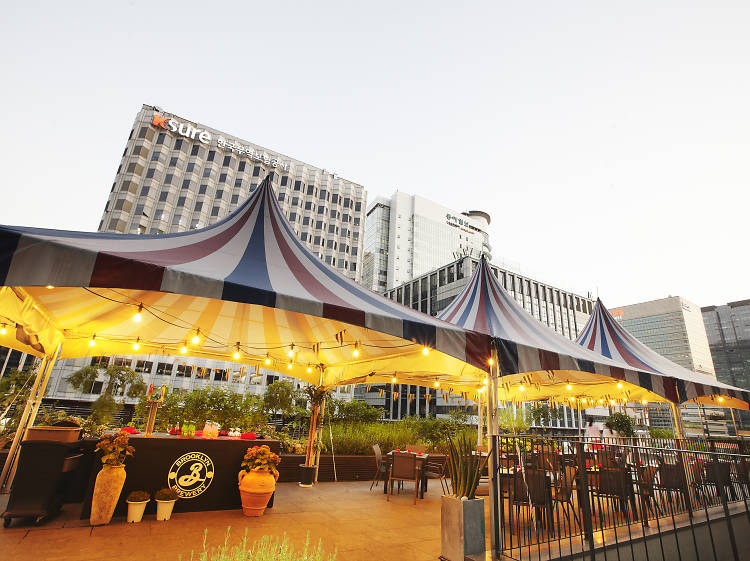 Chae Nak-young is a chef and a glib talker who is actively engaged in cooking shows on TV. Recently, he opened a fun restaurant in Gwanghwamun’s new landmark, D Tower. It’s said that he was inspired by circus performances, as they resembled the act of preparing dishes and delivering them to customers’ tables, and so he designed this place according to that concept. Maybe it is because of that, but looking at the chefs cooking in the open kitchen in the middle of the hall is like attending a circus performance. Behind the flamboyant tents are the skyscrapers of Gwanghwamun and drinking cold beer or a glass of wine, you might confuse it with New York. The chef’s witty interpretations of various European-style menu items, such as Gwanghwamun pâté, made with French cookie dough, pork shoulder and foie gras or the Mudeungsan subak, a dish made with watermelon topped with mozzarella cheese and prosciutto, will pique your curiosity about what the circus has to offer. 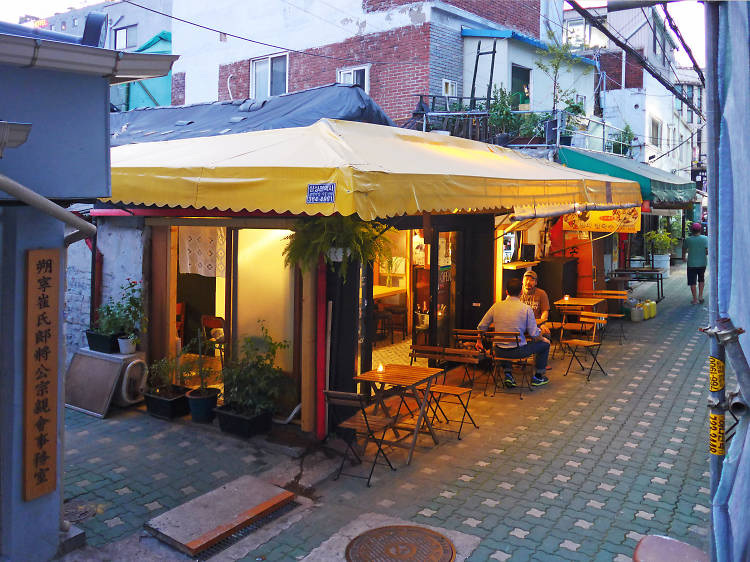 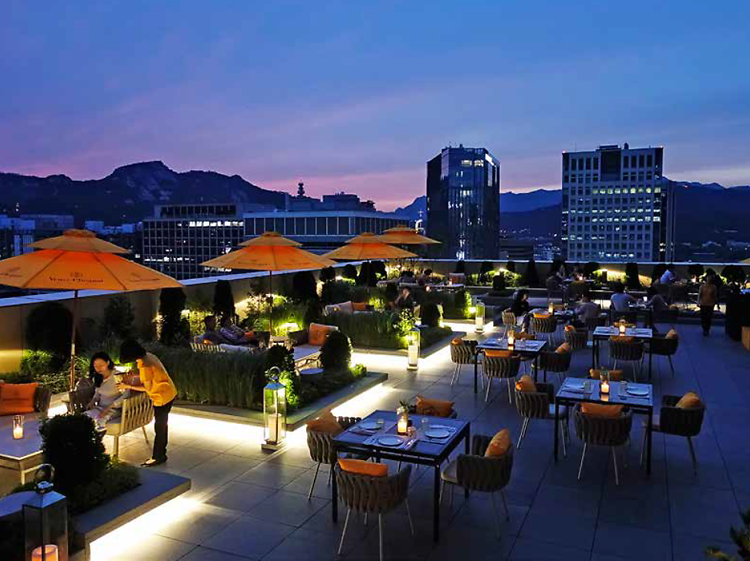 It’s summer and surf’s up. There are a number of surfing spots in Korea, like Songjeong Beach, but the hottest spot for surfing is Yang Yang county in Gangwon-do. Since it only takes three hours to get there from Seoul, many surfers head out to this beach during the week. Famous surfing spots in Yang Yang include Gisamun, Jukdo and Namae. Gisamun is  a great spot for short boards because it often has waves that are strong but not too big. The largest number of surf  shops are in Jukdo, and it's a great spot for beginners who are still learning to surf. Last but not least, Namae has strong and large waves and is packed with surfers. This summer, why not give surfing a try and glide through the wind and the waves?

If you’re a moviegoer, you’re likely already well aware of the new pricing system at CGV movie theaters, effective since March. Instead of the flat rate of 10,000 won, prices will now vary depending on the time and location of the screening. Economy zone tickets (seats in the detested front) are the cheapest at 9,000 won, while the standard is 10,000 won and prime zone tickets are 11,000 won. CGV argues that economy seats have now become 1,000 won cheaper and that customers can choose cheaper tickets if they so desire. However, the truth of the matter is that there are more prime zone seats than economy zone seats. This means that there are more higher-priced tickets than there are cheaper ones and that CGV ultimately makes a profit. We say, if you’re going to charge higher prices, just be up front about it, and create a clearer, more efficient system.