Still has a bunch of hits...

I remember my first visits to Yeonnam-dong, only a 15-minute walk from Hongik University, as drunkenly going to small after parties at 5am. To this day, Yeonnam-dong locals lament how difficult it is to get a cab driver to drive you from the playground to the small alleyways surrounding Dongjin Market. My first sober memories of the neighborhood start similarly and date back to 2010, when it was nearly impossible to find decent coffee for hungover Sunday mornings (a problem remedied first by Café Libre and then by Tailor Coffee). The Yeonnam-dong friends I had were the half-extroverted types—bragging about being the only foreigners in the more local part of town and being closer to the Hongdae action but also enjoying time alone. Though there was already a share of well-known Chinese restaurants around, the real boom started in 2014 when various newspapers began reporting on the hidden troves of foreign foods, cafés and guesthouses slowly emerging. Happening in conjunction with the revitalization of the neighborhood is the construction of Gyeongui Line Forest Park—a 1.3-km park with a small stream in the center that runs along the tracks of the former railways; lined with yellow gingko trees in the autumn and cheery dog walkers in the spring. A feeling of hope fills the air as this area welcomes some fresh faces and we, too, at Time Out Seoul would like to greet these new kids on the block. 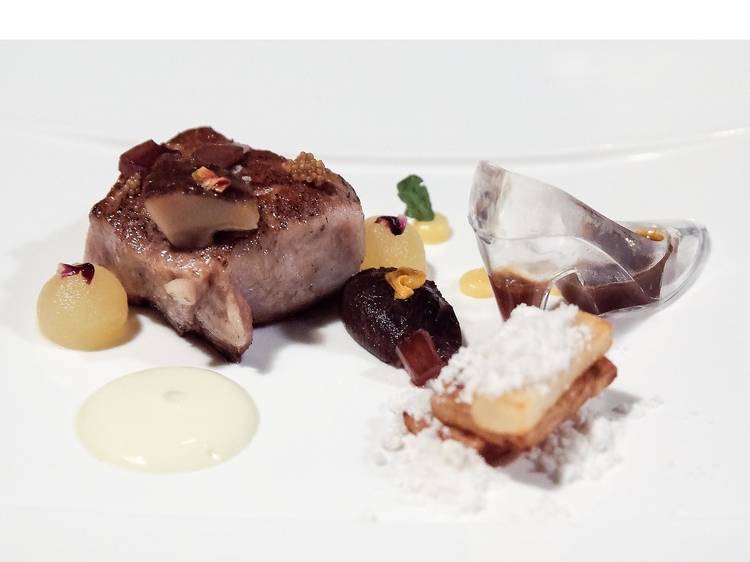 The perfect place for those looking for fine dining at a reasonable price, this restaurant offers a unique three-course dinner that comes with an amuse-bouche. The owner-chef Choi Jong-mun calls it a "fairy tale course," as the meal was inspired by children's stories. The course includes an amuse-bouche made with beets and balsamic vinegar, an appetizer made with carrots and orange puree and steak with sauce served in a glass slipper. Since the courses are seasonal, those who enjoy Gothic fiction can try the "Dracula Course" to be released later this summer. 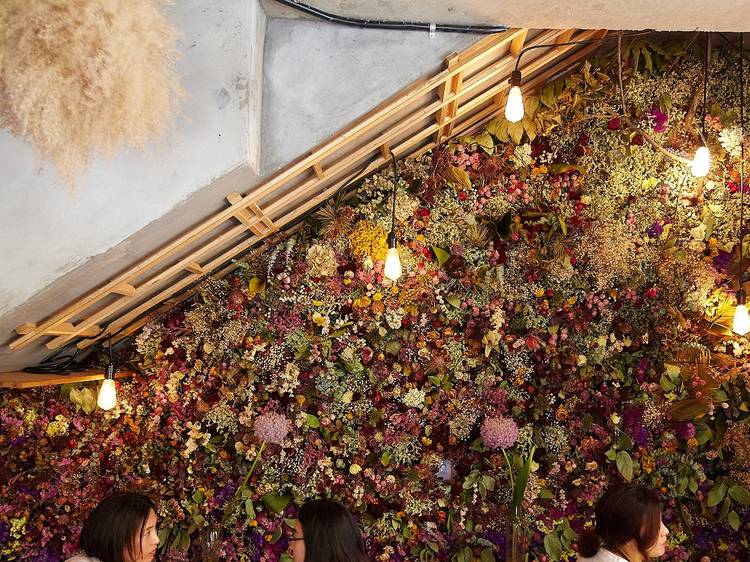 Who says you have to be outdoors in order to enjoy a garden? At Ver's Garden, you’re greeted by potted plants as soon as you reach the café’s doors. Once inside, you’ll notice an array of everything from fresh hydrangeas to roses near the counter and a back wall full of beautifully dried flowers. A variety of floral teas are served, as well as coffee and it’s a nice way to partake in the season’s best blooms whilst enjoying the modern technology of air conditioning. 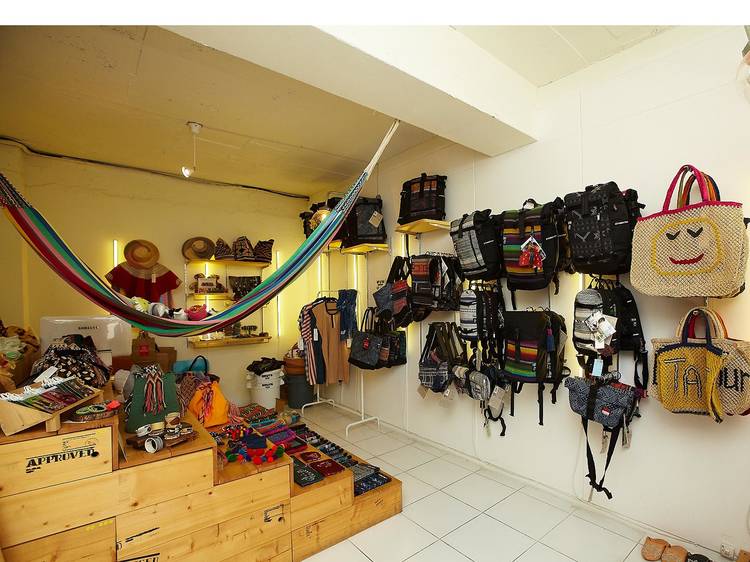 Featuring products from Southeast Asia, Guatemala, Indonesia, Thailand and more, Vita only imports fair trade and ethical brands. Case-in-point are the Ethnotek backpacks, which feature beautiful weaves from places such as India, Vietnam and parts of Africa. For the uber-socially-conscious, we’d recommend doing your research before you buy, as the prices can be quite steep. The shop also offers a great collection of accessories from shoes to bracelets, etc. 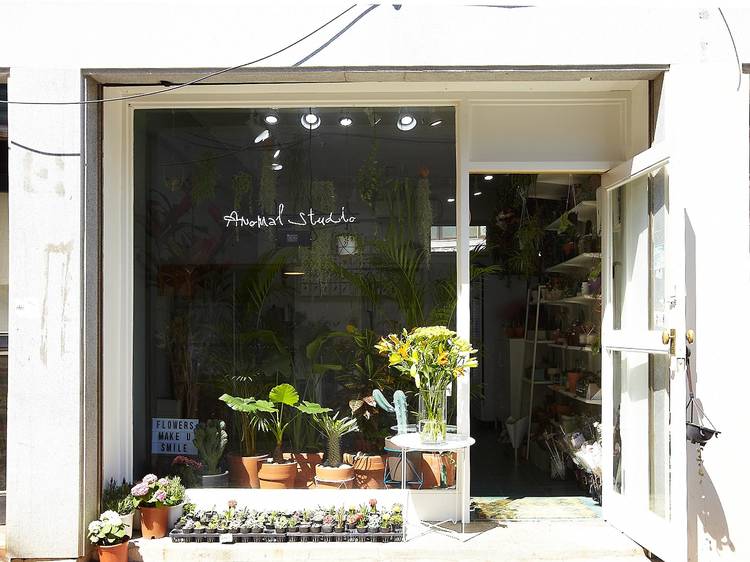 Blasting its name in neon colors, you might think this flower store is a photography studio upon first glance. Anomal Studio picks up its flowers fresh from Express Bus Terminal three times a week and inside, you’ll find a variety of vases, cacti, flower bouquets and cards with dried flowers on them. Anomal Studio also offers one-day flower arrangement classes, which are all the rage these days. 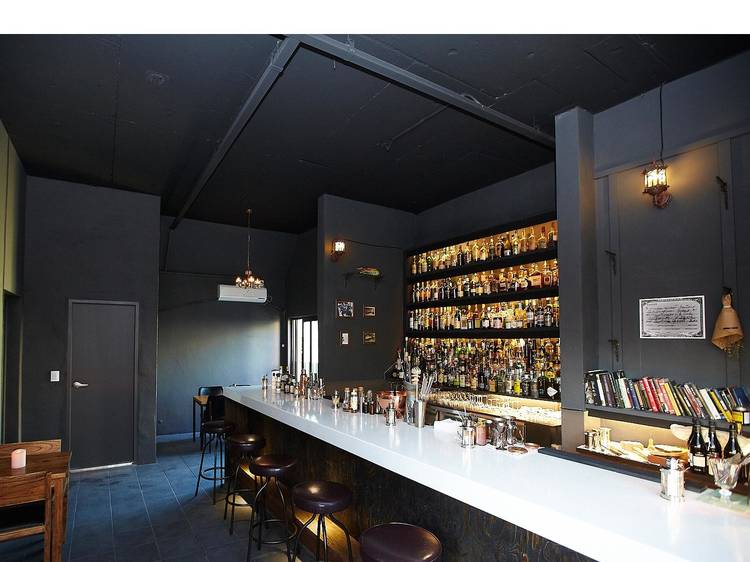 Located on the third floor, Old Fashioned likes to claim that it’s “a bad place to take a date.” While cozy and candlelit, the drinks here are serious business and the bar draws inspiration from the pre-Prohibition era. The bar, which opened last December, attracts an interesting mix of the expert alcoholic type (namely, writers and bartenders). Lovers of the banned and beloved absinthe may find a second best in the Absenthe Frappe—minty with a strong scent of licorice. 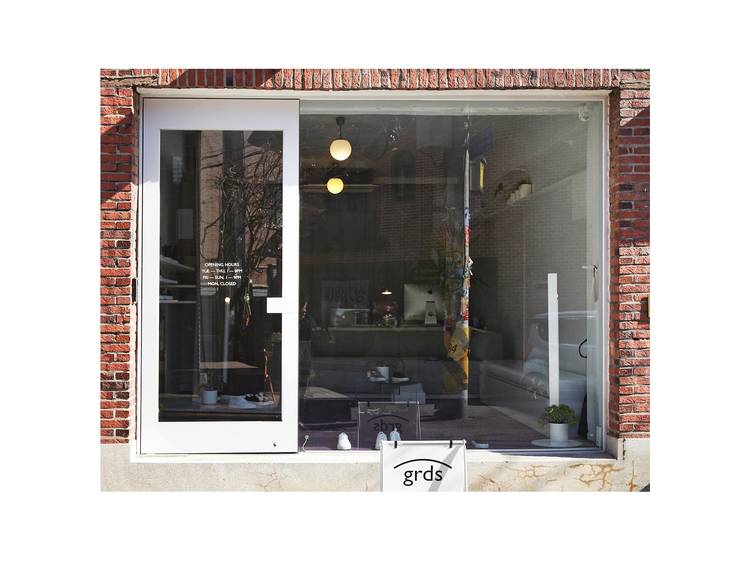 The parent company of this brand, Bio M, is owned by a podiatrist. Employing the technologies developed by Bio M, grds uses special soles made by an Italian master for their shoes. The bottoms of their shoes are curved in order to make walking feel natural and comfortable. As much as they focus on the basic functions of their shoes, their design is also stylish. Once you try on their sneakers, you will probably go home with a new pair of shoes in your hand. 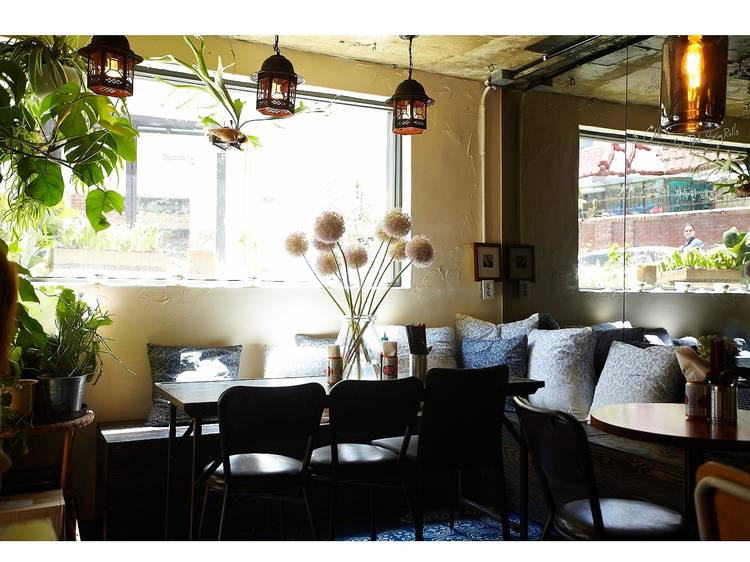 One of the most talked about restaurants in the area right now, Anh has a line almost as soon as it opens. Owned by a Canadian-Vietnamese couple who use family recipes to make what they boast as being “home cooked Vietnamese food,” the restaurant has only has three main dishes—a hot pho dish, Vietnamese-style pork chops with rice and our personal favorite, the bún thịt nướng chả giò (a cold vermicelli bowl with vegetables and fried spring rolls). We say it’s definitely worth the wait. 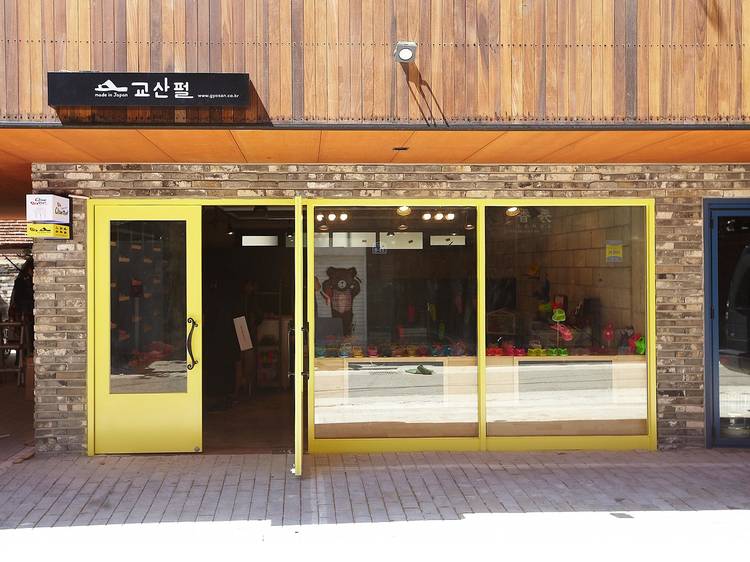 Afraid of slipping in your cheap flip-flops during the hot, wet summer? This summer, invest only 10,000 won extra and get yourself some quality summer footwear at Gyosan Pearl. Originally from Japan, Gyosan Pearl makes both beach-appropriate flip-flops and comfy-for-the-office indoor shoes. With indents in the sole of the shoe, the traction it provides makes it much sturdier than the average footwear. At the prices they offer, try out these bright, fun color flip-flops for the summer and get a pair for work, too. 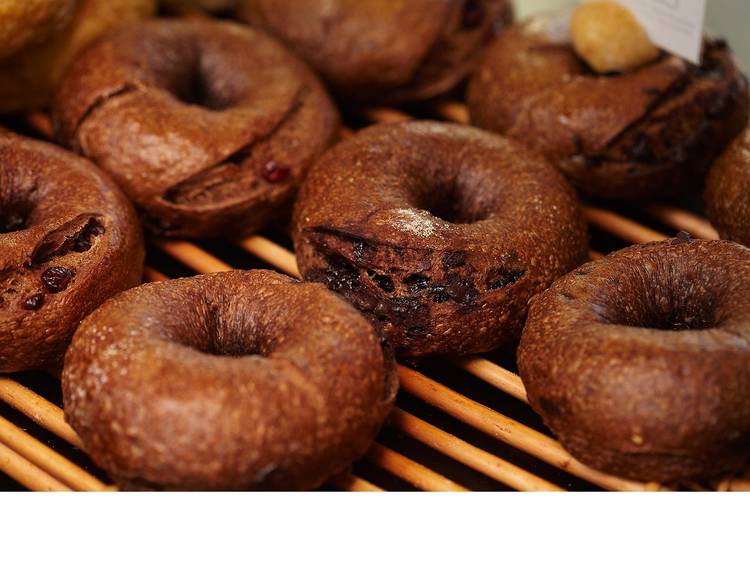 Looking for a crispier alternative to the famous New York bagel? Watch out for its strong competitor from the West Coast—the San Francisco bagel now available at this corner store in Yeonnam-dong. Made without yeast or sugar, these bagels are smaller in size, have a bit more of a crunch and, of course, have a sour tang. Cream cheeses are also available. Be sure to check out the bagel shop’s aromatic baked goods—their cinnamon roll is to die for! 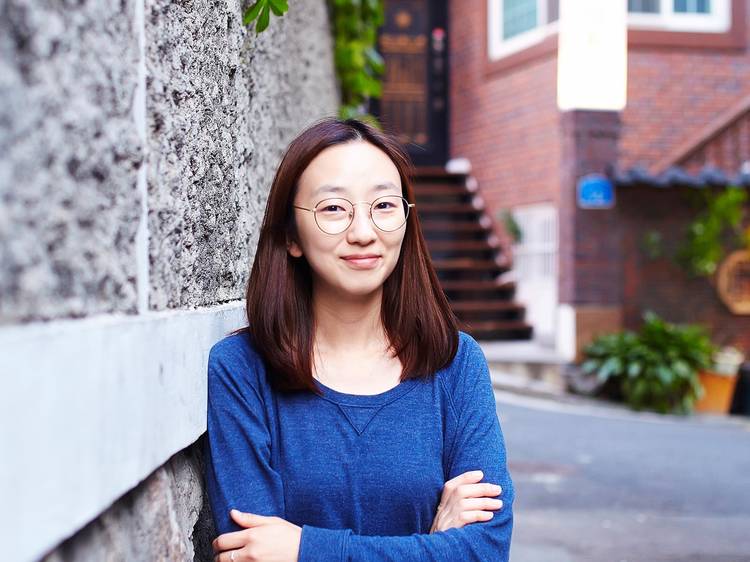 I moved here just this past February from Hoegi-dong and I [chose it for] its good balance of residential and commercial spaces. Also, since I sometimes eat alone or work at cafés, it was important that I move somewhere with unique restaurants and cafés around. Since many spaces are run by artists, the neighborhood feels different from other areas. I [already] love living here. 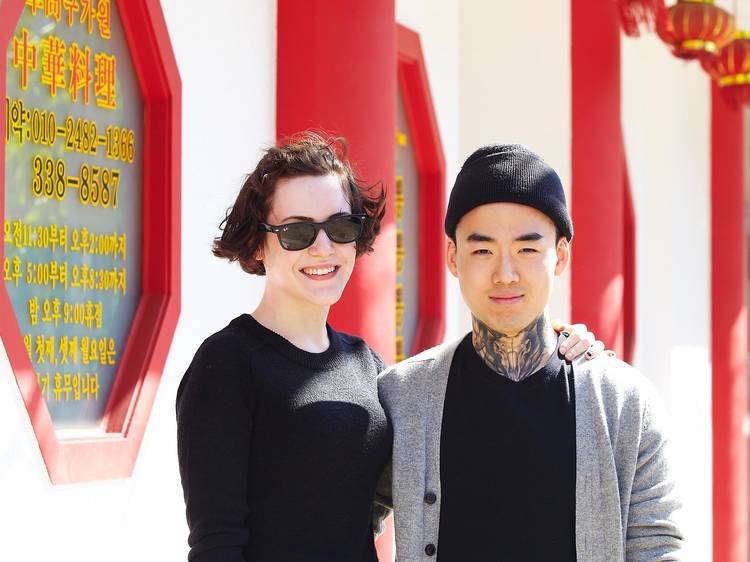 We don’t live around here, but we live just next door in Seogyo-dong. I like coming to this neighborhood to grab something to eat and because there are a lot of places to shop—there are some vintage shops near here that I really enjoy and a funky toy store. In general, it’s quiet and not as loud as Hongdae, so it’s a close place to get away from it all.