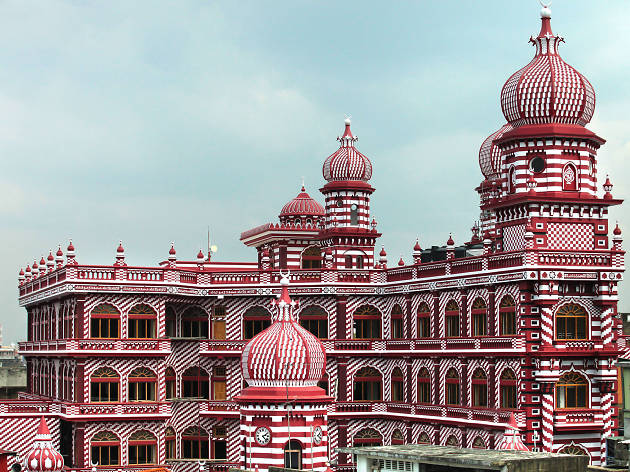 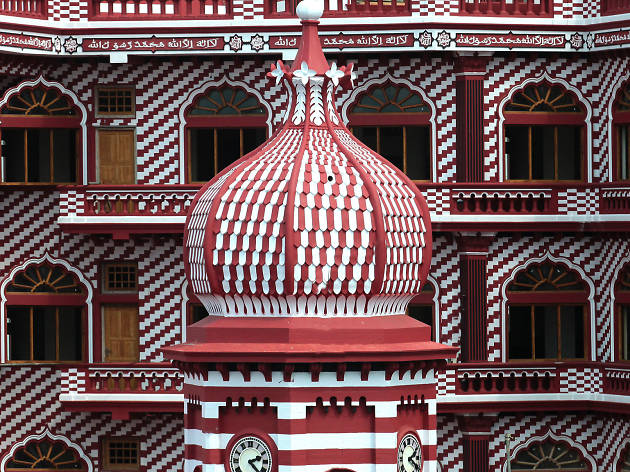 The largest congregation of prayer in Sri Lanka

The Jamiul Alfar Masjid is a towering edifice in the heart of Colombo’s commercial area – Pettah. The remarkable feature of this mosque is that instead of the usual white, each brick of this building has been painted in red and white creating a striking design. This mosque is of Indi-Saracenic architecture with pomergranate shaped domes. The Masjid was built as a place of worship for South Indian businessman during the 19th Century and to date is a sacred place for all Muslims to worship.

The need for a common place to conduct prayer five times a day saw the initiation of the Mosque in 1908 by Muslim forefathers from India. Although built with a capacity for a congregation of 1,500 people the number attending prayer at the time was only around 500. By the 70s the numbers had grown and space became a constraint leading to expansions. Today the numbers have swelled so much so that in particular for Jummah prayers 5,000 devotees attend. On regular work days around 2,000 congregate for Jammath prayer while 3,000 arrive during Ramazan days. `Expansion is in progress to accommodate a congregation of 10,000 devotees to pray at this mosque at any given time. The Masjid is open for visitors between 10 in the morning and 12 noon. Dress appropriately as this is a place of worship.