Life under the tracks

Back in the day, the phrase ‘under the railway tracks’ was associated mainly with rows of cheap watering holes frequented by middle-aged salarymen drowning their sorrows. But a recent rush of notable re-development efforts have led to the opening of clusters of restaurants, bars and even art galleries under viaducts in hip neighbourhoods like Nakameguro and Shimokitazawa, busting old stereotypes into bits. Get ready to raise your glass to the sound of a train rumbling by and follow us on a tour of the city’s hottest under-the-tracks spots, from the trendy to the traditional.

Where to party under the tracks 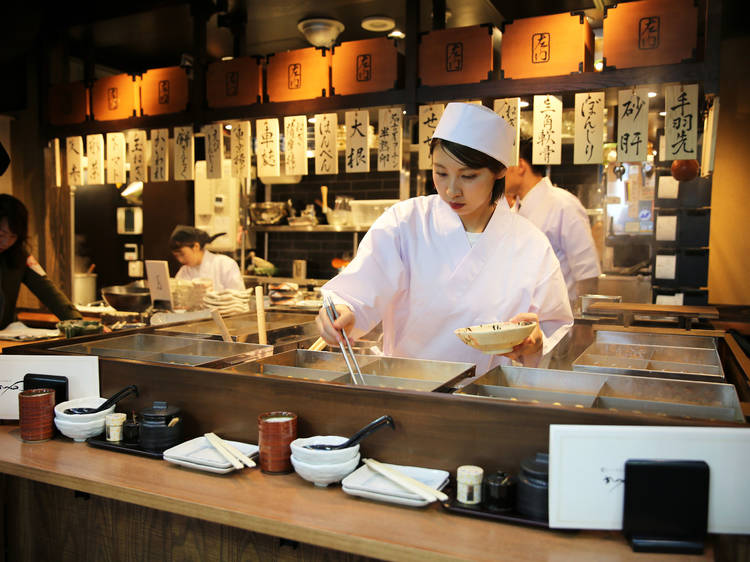 Stretching for a total of 700m from the Meguro River across Yamate-dori in the direction of Yutenji, Koukashita opened in November 2016 and houses shops selling everything from books to wine, in addition to several noteworthy restaurants. Walking from the station towards Yutenji, you’ll come across an ideal bar-hopping strip composed of standing-only specialist sake bar Shin, yakiniku stall Jiromaru, Niwakaya Chosuke, an izakaya dedicated to udon, and so on.

Best of the lot is Samon, an oden specialist from Nagoya, distinguished by the rather eye-catching, oversized stew pot sitting outside the entrance. The oden is superb, simmered in a chicken and vegetable stock noted for its full-bodied and rich taste. Closer to the river you’ll find the playful Pavilion, which is perfect for a romantic date. Enter through the ‘secret door’ and you’ll be welcomed by art from star duo Kohei Nawa and Tatzu Nishi. The restaurant even has its own currency, which feels a bit gimmicky but still fun and can also be used to buy flowers for that special someone. 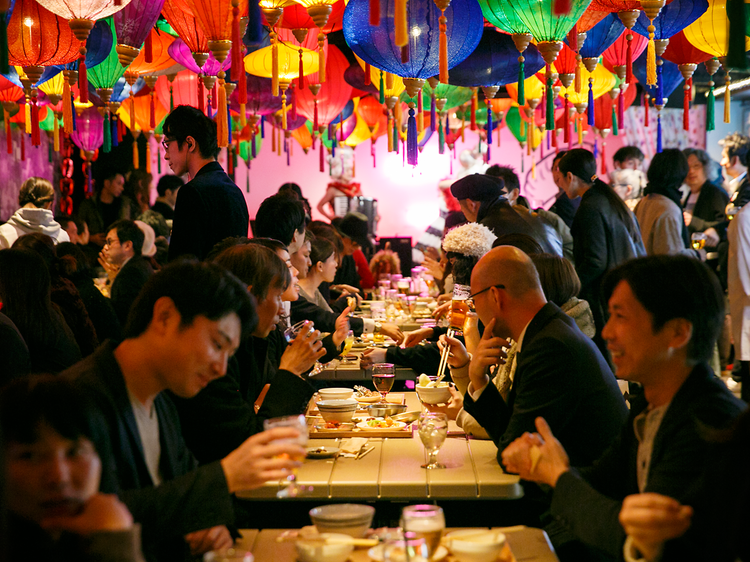 Drawing on youthful energy, the colourful and fusion-minded Sanagi is an apt symbol for its international and diverse neighbourhood. Tucked in beneath the elevated Koshu-kaido highway next to Shinjuku Station, this space opened in December last year and is home to a bunch of fine boozers.

Right at the entrance you’ll find Neo Tokyo Bar, a standing-only spot perfect for a quick drink and with Japanese craft beers on tap including Hitachino Nest’s Weizen and Coedo Shikkoku. Further inside there’s a self-serve food area where you can fill up with small servings of a selection of noodle dishes, oden and sushi rolls. Sanagi hosts regular art exhibits, DJ performances and gigs, and is frequented by some of the city’s stars in waiting. 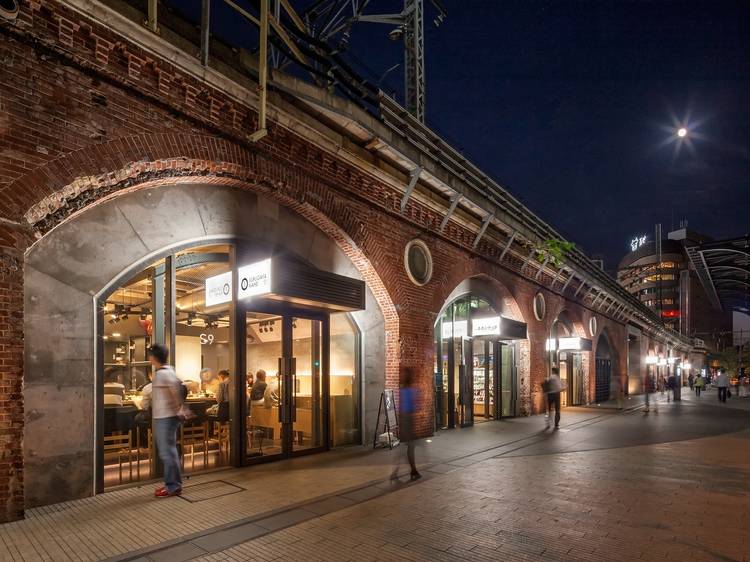 This curiously named complex opened at Kanda’s old Manseibashi station in 2013 and is one of the best examples of conservation-focused under-the-tracks re-development. Located between Kanda and Ochanomizu stations on the Chuo line, it oozes history thanks to the red-brick walls that were part of the original station, constructed in 1912. You’ll find rows of handsome shops inside, in addition to the Hitachino Brewing Lab, a brewpub that offers beer-making classes and the full lineup of Hitachino Nest beers brewed on site. The innovative nibbles come served stuffed into convenience store-style sake cups. 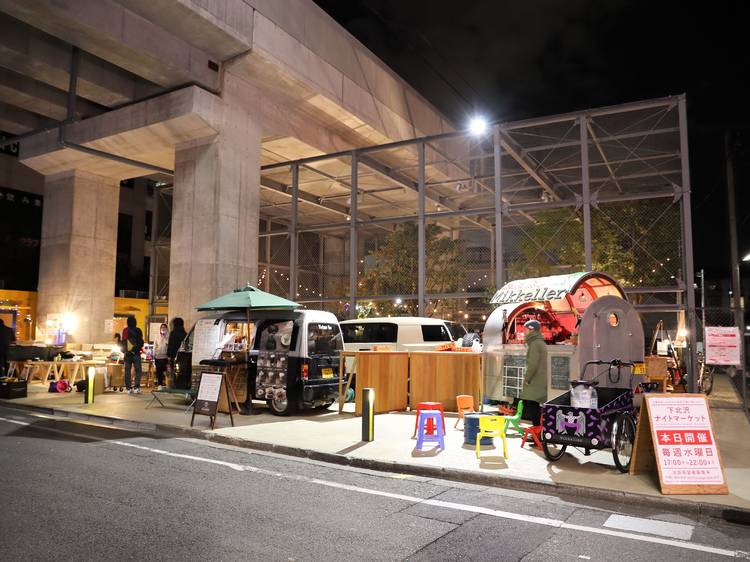 Rising up underneath the elevated railway tracks close to Shimokitazawa Station, Cage started business in summer 2016 and will be around until 2019, when something, well, more profitable is set to take its place. Until then, however, you can enjoy after-dark events including markets, food and drink festivals and family-friendly happenings.

Right next to the cage that gives the place its name is casual food stall and stand bar hub Lóng Vá Quán, which draws inspiration from the night markets of southeast Asia and offers a variety of exotic-sounding delicacies; try the bánh xèo, which is Vietnam’s answer to Osaka’s savoury okonomiyaki and makes for a heavenly match with a beer or cocktail. 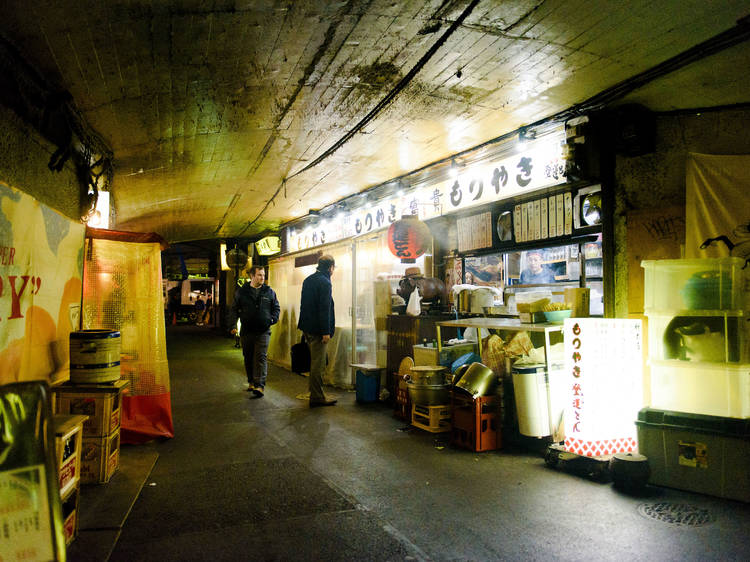 For a taste of Showa-era life under the tracks, there’s no beating the overpass that links Yurakucho and Shinbashi stations. Known as ‘salaryman heaven’, this area is home to countless yakitori and motsu nikomi (stewed pork intestines) joints, standing-only bars, Chinese restaurants, tempura and sushi spots and even a German-style beer hall.

Start out at the Hibiya exit of Yurakucho Station and head for Shin-Hinomoto, better known as Andy’s. In business for over 70 years, this izakaya is now run by third-generation English ‘master’ Andy, who serves up mean sashimi and grilled fish made from ingredients brought in fresh from Tsukiji every day. Next up is Matsuso, which you’ll find on the Shinbashi side of Harumi-dori. Cutting additives down to a minimum while turning the hospitality up to eleven, the staff at this unpretentious izakaya are as much part of the attraction as is their famed nikudofu (a block of tofu topped with flavourful beef).

For a more refined meal, book a seat at Sushi Daizen, where the only menu option is the omakase (chef's selection, ¥7,000-¥8,000 depending on the day) but bringing your own drinks is fine. Service includes chilling your bottle for you. 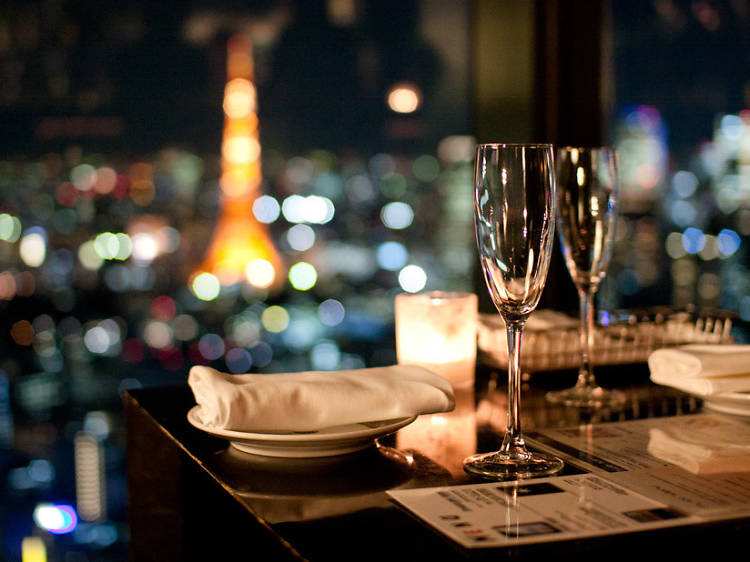