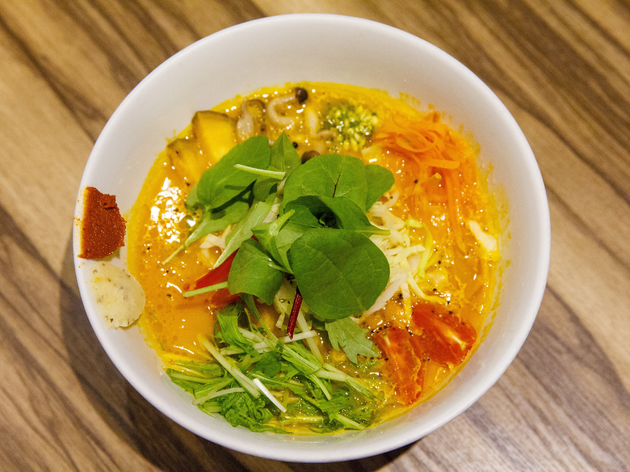 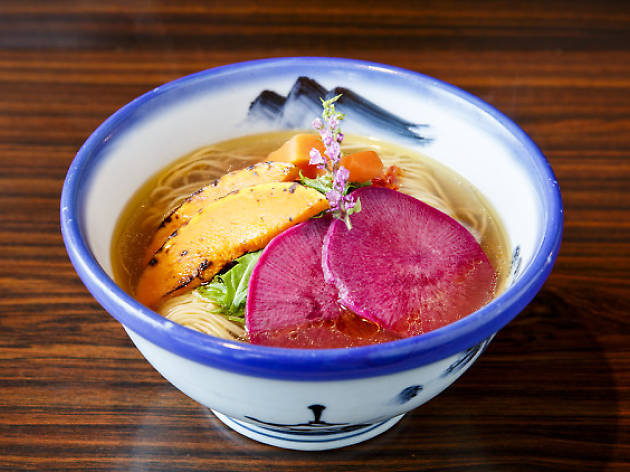 Once limited to meals composed of nothing but onigiri, vegans in Tokyo have been graced with more and more choice in recent years. But one option has remained off limits until very recently – ramen. Luckily, the food gods have begun answering every noodle-starved vegan’s prayers, and Tokyo now has a handful of ramen shops with mouth-watering mixtures – none of which have seen any animals harmed in the noodle-making process. 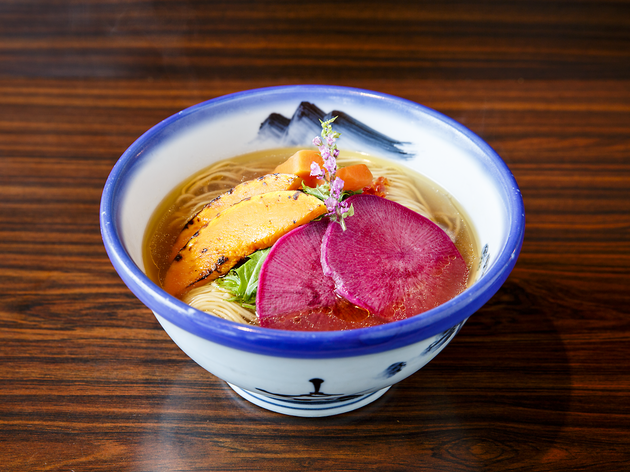 Many a Tokyoite’s default late-night ramen joint, Afuri is also the only bigger chain that has a dedicated vegan option. That means you’re never far from an animal product-free, slurp-worthy bowl, even after an all-night bender. Their vegan version is rather colourful, with an assortment of seasonally changing, vivid toppings.

Ours included tomato chunks, fried shallot and red pickled daikon, all served in a very light broth (it almost feels like udon or soba broth instead of ramen) and with their custom noodles, which are blended with lotus root rather than egg. At ¥1,255, it’s a bit of a splurge, but you’ll rarely feel as healthy and refreshed after eating ramen as you will here.

Note that AfuriYokohama do not serve vegan ramen. 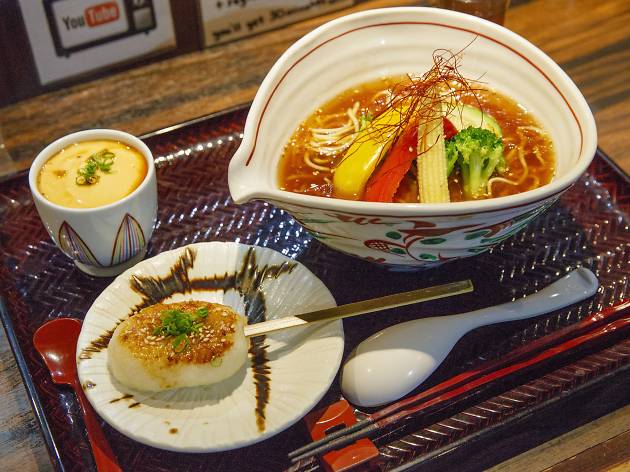 Halal ramen specialist Ramen Ouka also does a mean range of vegan bowls. Topped with steamed vegetables and served in a light yet sufficiently salty broth, it’s more of a summery dish than a hearty winter warmer. Do note there’s a difference between lunch and dinner prices. Vegan ramen at lunchtime is from ¥1,500, while at dinner you’ll pay at least ¥2,200 (plus tax). Good thing you’re getting a lot for it: dinner comes with an appetiser, grilled rice on a stick and a drink. Expect hour-long queues at regular dining times, regardless of the price. 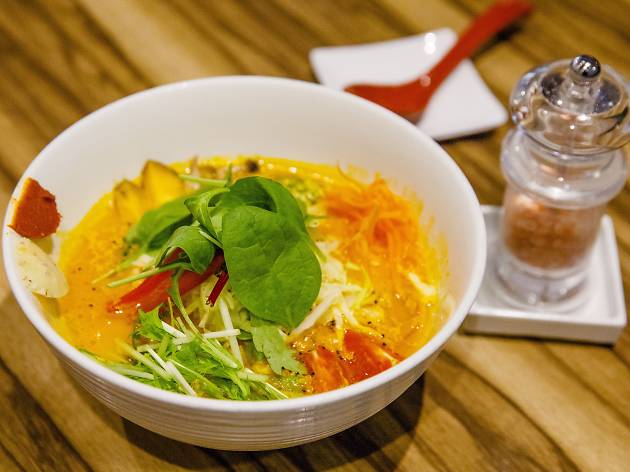 Having started out with just one shop in Kojimachi, Soranoiro has since branched out to three venues across town, but the original Kojimachi shop still boasts the most charm. The vegan soba (¥1,000) is made with a carrot- and cabbage-based soup, which makes for a surprisingly rich broth. The veggie toppings change daily, and you can choose from gluten-free rice noodles or paprika-infused wheat ones. (In another twist, Soranoiro even has hair ties at the ready for those not wanting loose hairs to dip into the broth.)

If Kojimachi is out of your way, make a beeline for the Kyobashi outlet, which serves rather superb, mushroom-based and vegetarian ramen (around ¥900). Tell the staff you’re vegan and they’ll change it up accordingly. 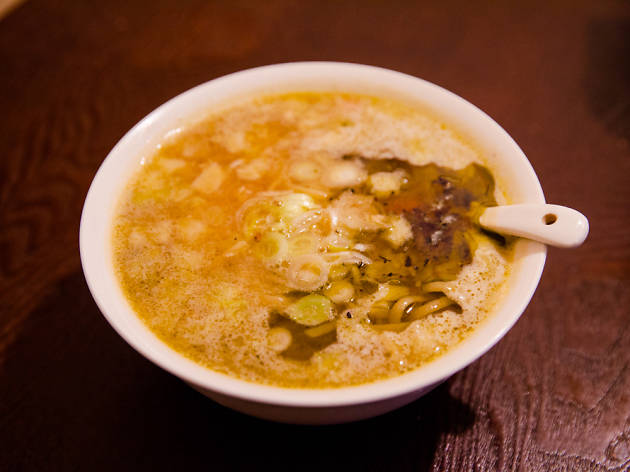 This small, slightly shabby eatery in the backstreets of Shimokitazawa is a haven for ‘yakuzen’ cuisine: vegan food that’s purported to have medicinal benefits. Flavour-wise, their signature brown rice yeast-based ‘Dragon’ ramen (¥1,200) is the closest you’re ever going to get to tonkotsu as a vegan. Otherwise, opt for the Kuro (brown rice yeast, black sesame dan dan men) or the Nirvana – a curry ramen named after the band, not the afterlife. 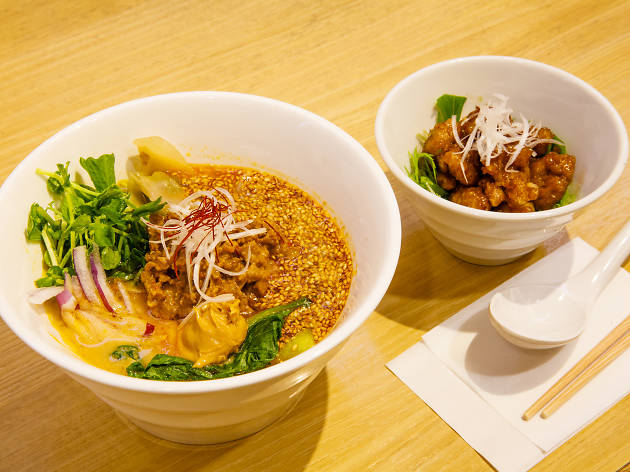 T’s Tantan is perfect if you’re on the go, and pretty much worth re-routing your trip for if you’re not: it’s (somewhat inconveniently) located inside the JR Tokyo Station ticket gates near the Keiyo line platforms. Marketed as ‘veggie’ but actually vegan, the main speciality here is vegan dan dan noodles, including black, white and ‘golden’ sesame varieties (¥880-¥900). All three are topped with soy meat and feature a spiced broth that tastes lighter than the meat-based version, but still makes for a hearty meal.

If you have extra stomach space, make it a set with a side of soy karaage (fried ‘chicken’), which pretty much tastes like real meat – in case you need to convince a carnivorous dining partner. 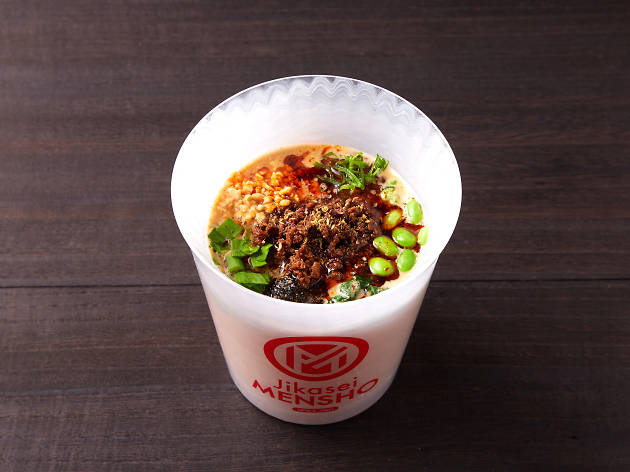 With a total of ten ramen restaurants in Tokyo and a Michelin-starred outpost in San Francisco, ramen master Tomoharu Shono opened his newest location in the basement of Shibuya Parco. This modern ramen eatery doesn’t have a paper menu or ticket vending machine; instead, orders are placed through a tablet found at each seat. Jikasei Mensho offers a vegan version which is almost impossible to tell from the original. The noodles are made from quinoa, making them lower in carbohydrates and gluten while maintaining the signature chewy consistency.

All dishes are served in gigantic translucent cups which were made specially for serving Jisakei Mensho’s ramen. Roughly the size of a tall drinking glass, they fit perfectly in one hand, so you can easily finish every last drop of broth. 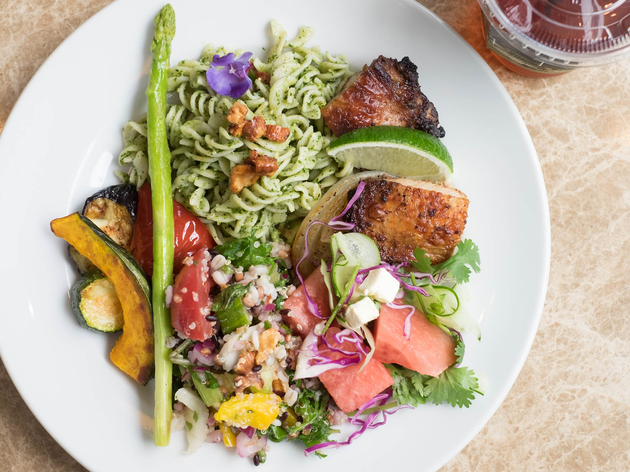 You're spoiled for choice for excellent vegan food in the city. Here are four of the best options 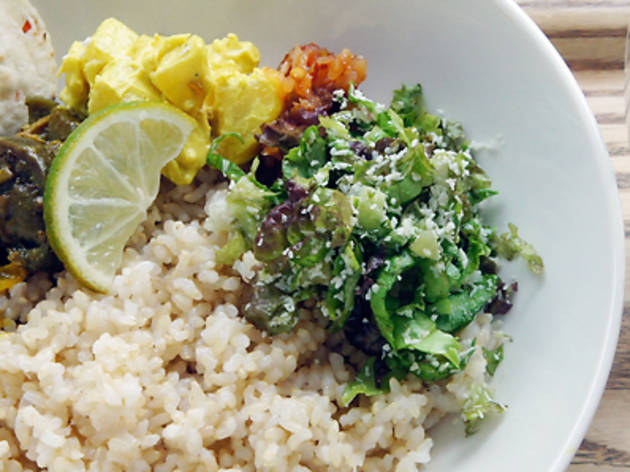 Long-suffering vegetarian? Tokyo offers great options – if you know where to look