The 12 best events in Toronto

From the Toronto International Film Festival to Pride, the best events in Toronto prove the city knows how to celebrate

If planning a visit to Canada’s largest city, plan for your itinerary to be as diverse as the city itself and make sure to time your trip to coincide with some of the best events in Toronto.

One of North America’s most vibrant hubs, with plenty of fun things to do all year round, it is no surprise that nearly three million folks call Toronto home. That number actually doubles when including the surrounding commuter cities that make up the greater Toronto area. That’s a citizenry that is rather choosy when it comes to the arts, nightlife and restaurants scene that make up the spirit of the town—which means Toronto is a city of many film, theatre and food-related events that are highly influenced by the multicultural folks that live here. Think of the best events in Toronto as your chance to sample a slice of life from faraway countries without actually traveling there.

And, even though this Canadian destination rests under a thick layer of snow for a third of the year, worry not: the energy never dips. Join in on the fun.

RECOMMENDED: Full guide to the best things to do in Toronto 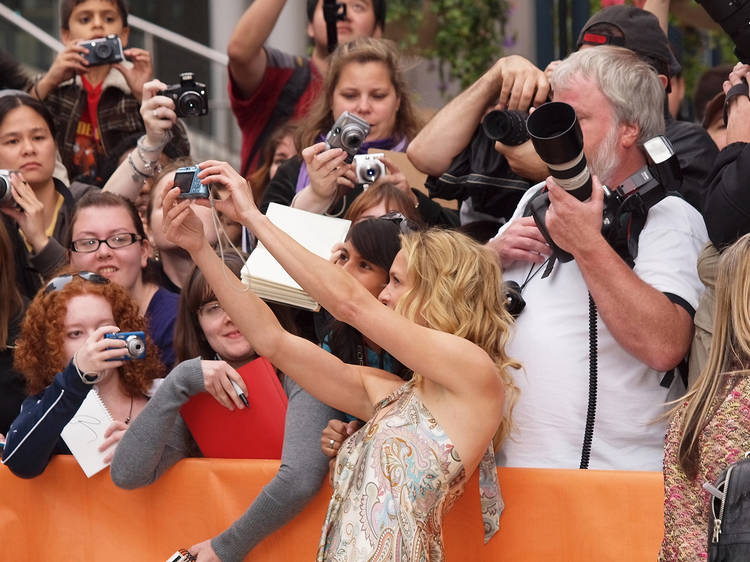 The “white whale” of city celebrations is the Toronto International Film Festival (TIFF), one of the world’s largest and liveliest movie-related fests. For 10 days, 450,000 film fans descend on the city to binge-watch debuting flicks and creep the red carpet for A-listers. Some consider it the most influential film festival in the world, with many past TIFF hits (12 Years a Slave, Slumdog Millionaire, American Beauty, Spotlight) eventually nominated for and winning Oscars. The best thing about TIFF is that the spotlighted genres range from documentary to foreign films and Hollywood hits: there’s something for every type of buff. Pro-tip: unlike other film festivals, anyone can attend TIFF. But high-profile movies and premium screenings (prime celeb-spotting opportunities) sell out early, with first dibs given to those who purchase packages. To get into a buzzy premiere, buy your tickets ASAP. 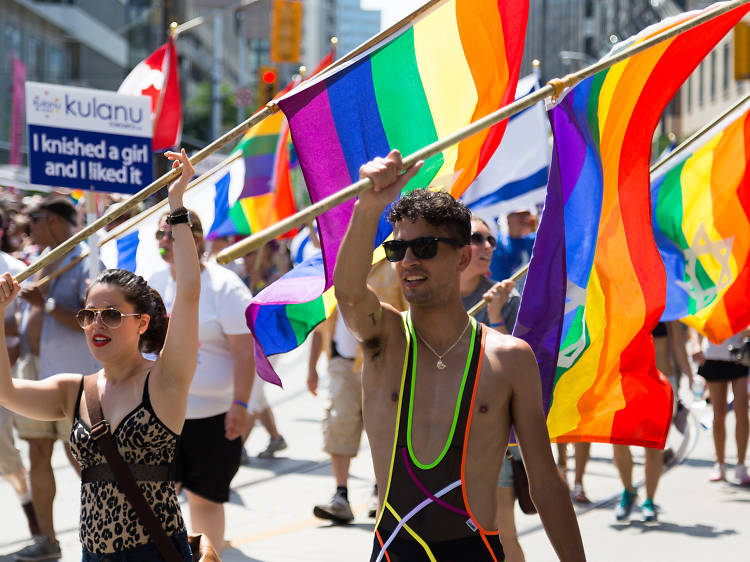 Every year in June, Toronto hosts about 2.5 million people participating in the city’s Pride festivities – the largest LGBTQ+ pride celebration in North America. This month-long arts and cultural event is one of Canada’s biggest and most significant throughout the year and it focuses on celebrating gender and sexual diversity in myriad different ways: from family-friendly activities to block parties to drag performances. If visiting during Pride, Toronto’s Gay Village in the Church Street neighborhood is the place to be. On the last day, the famed and fabulous Pride Parade consumes Yonge Street with marching groups and colorful floats representing the LGBTQ+ community. That itself has been a major event for 39 years now. With throngs of spectators expected, you should arrive early to get a prime viewing spot. Make sure to bring sunscreen and water along with you. 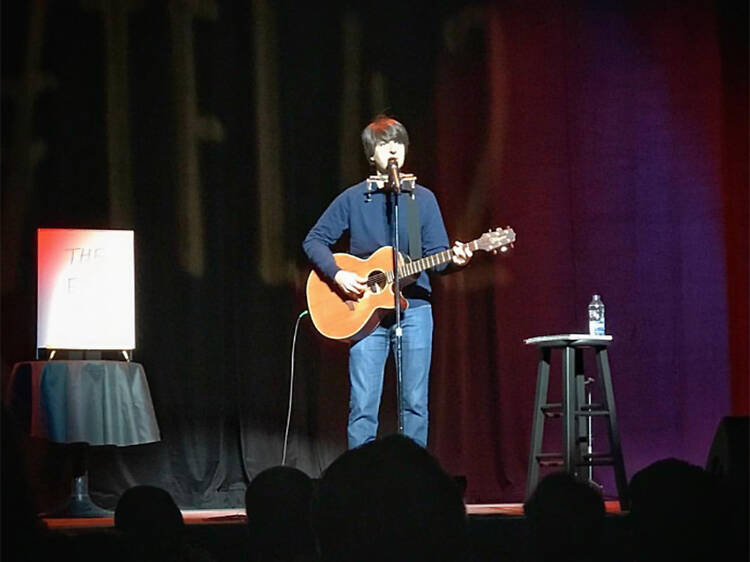 Given the city’s history of churning out funny people (think Mike Myers, Catherine O’Hara, Samantha Bee and Lorne Michaels, to name just a few), it’s no surprise that Toronto hosts the annual JFL42. This 10-day gut-busting comedy event brings out big names like John Mulaney, Ali Wong, Sarah Silverman, Margaret Cho, Wanda Sykes and Jim Gaffigan. Instead of selling individual tickets, the festival offers passes that will allow you to catch one or more of your favorite headliners and hilarious acts. This year, expect to see famous comedians like Joe Rogan, Hannibal Buress and Chris D’Elia. Those who binged Netflix hit Workin’ Moms will enjoy the planned event that will spill behind-the-scenes details from the show. 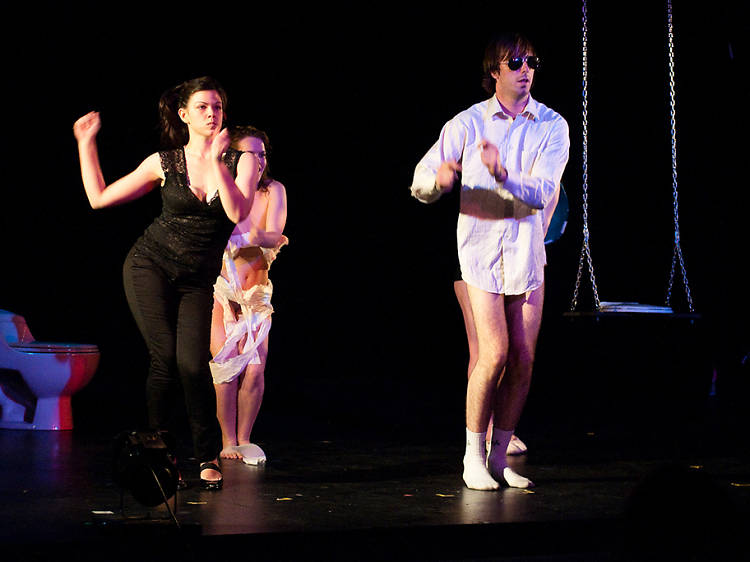 For a dose of edgy and experimental theatre, attend the esteemed Toronto Fringe Festival, a grassroots indie theatre fête. It features more than 155 uncensored shows tapping every genre: from a mash-up of newly-penned plays to dance productions and musical comedies. This festival has been going strong since 1989 and runs in more than 30 venues across the city. Admission prices are intentionally kept affordable in an effort to make theatre and the arts accessible to all. What’s special is that the works are “un-juried:” no-name and established artists have an equal shot at being featured. FYI: the co-creators of the Broadway hit Come From Away had their first big break here. 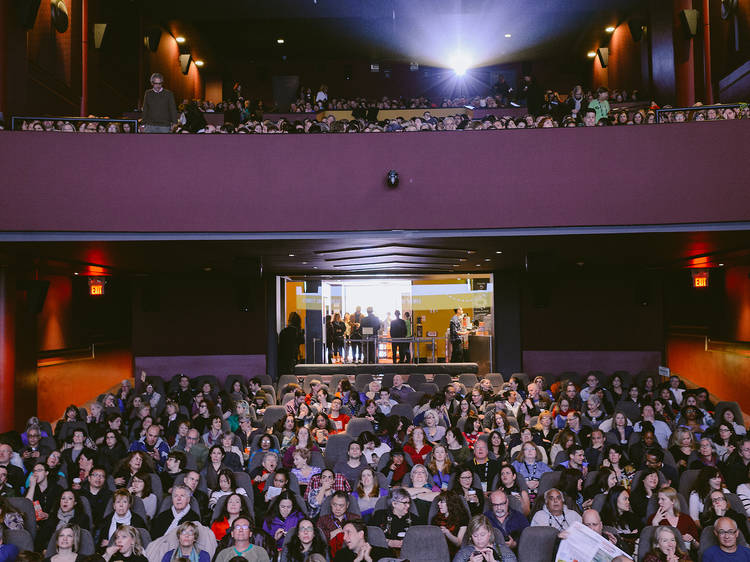 During the spring, Toronto sees an influx of visitors stopping by to take in the largest documentary festival in the continent. The Hot Docs Festival features over 200 films and it’s one of the most informative and entertaining events that happens all year. Screenings are scheduled at various theatres across the city and with documentaries that range from environmental calls to action to examinations of social justice issues to more artistic experimental documentaries, there’s something for every type of film nerd. Pro tip: don’t rush out of the theatre after the credits as, oftentimes, the director is waiting backstage for an audience Q&A. 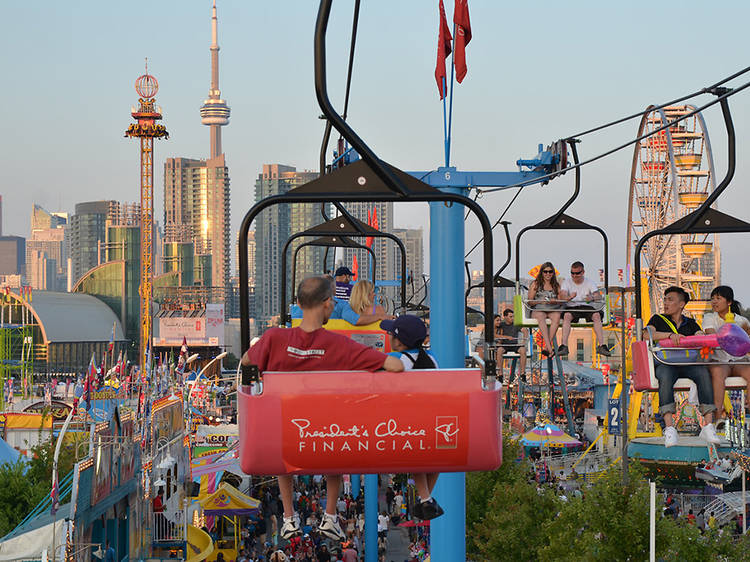 For two weeks towards the end of summer, an area near Toronto’s waterfront becomes a wacky and action-packed carnival. Both Torontonians and tourists spend their days lining up for rides, ogling planes do tricks in the sky at the airshow and, most significantly, eating the craziest of the festival’s culinary creations. The Canadian National Exhibition (known as the CNE or “The Ex”) has become a contest of sorts for vendors to create the most over-the-top deep-fried treats. So far, the CNE has introduced us to the “cronut” (an unlikely cross between a croissant, donut and burger), stuffed Doritos (who knew it was possible?) and strawberry steak sandwiches (actually…). Go with an open mind and maybe save the calorie counting for another day. 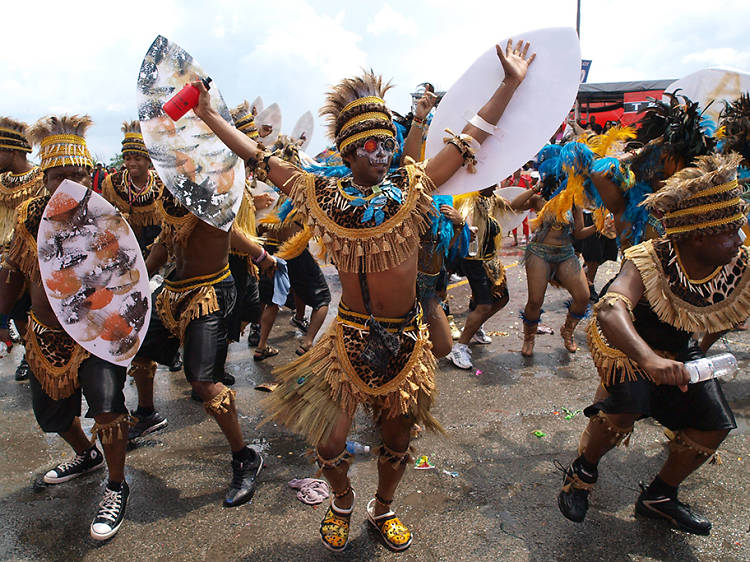 New Orleans has Mardi Gras, but Toronto has Caribana: a month-long celebration of Caribbean music, cuisine and revelry that has more than a million festival-goers flocking to events in the city. When the festivities are in full swing, all corners of the town are celebrating Caribbean culture as well as Canadian diversity and freedom: whether it’s feasting on Caribbean delicacies to dance offs between costumed kings and queens to tent talks hosted by storytellers, comedians and other orators. The party pinnacle is the Grand Parade, when masqueraders show off their colourful costumes (think sparkling bikinis, elaborate makeup and brightly-colored feathered headpieces) on a 3.5-kilometre march along Lake Shore Boulevard. 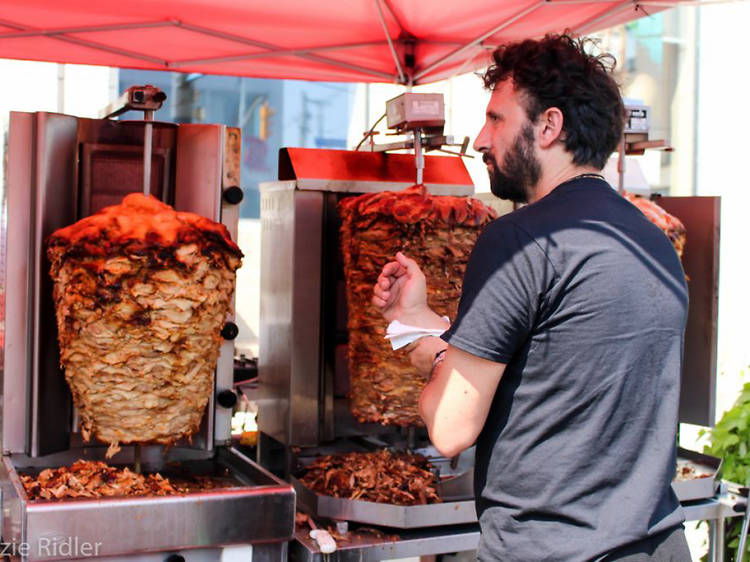 8. Taste of the Danforth

Taste of the Danforth is the ultimate food festival in Toronto and, in a city that loves to eat, that’s saying something. For three days, hungry hordes flock to “Greek Town” on Danforth Avenue (known locally as “The Danforth”) to feast on Greek delicacies. Toronto just so happens to be the home of the third-largest Greek community outside of Greece itself, a fact that, in and of itself, makes this a must-attend festival each year. Food stations line the street, selling souvlaki, grilled lamb and moussaka, and local restaurants offer tasting menus for a mere $6 so visitors better come ready to pig out at more than one. Just know before you go: this tasty festival is attended by 1.6 million ravenous foodies and has been named Canada’s largest street festival, so it’s going to be a feeding frenzy. 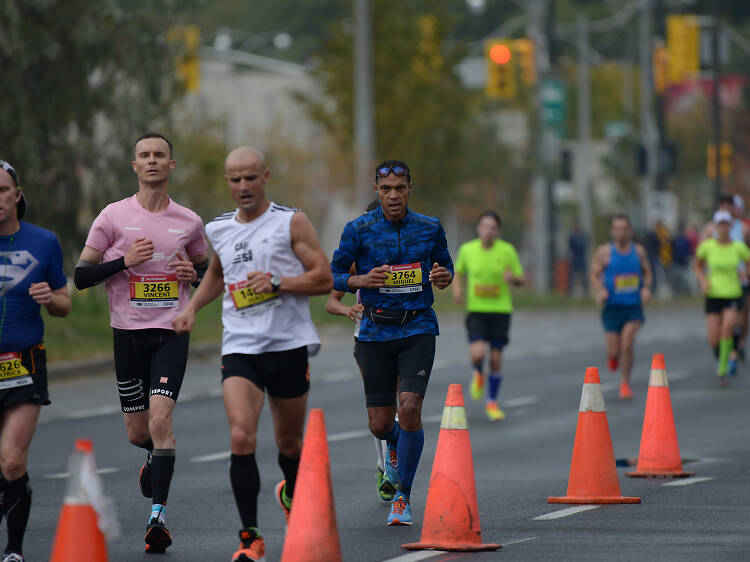 Plenty of folks don’t know that every year in late fall, Toronto is the host of a world-class marathon that brings high-level athletes from all over the world to town. Not only is the Toronto Waterfront Marathon the race where Canada’s best distance athletes compete, but it draws Olympians and record holders from top running nations like Ethiopia and Kenya. This is, without a doubt, one of the best Canadian events to witness the world’s elite athletes demonstrate the finest of human physical capabilities. 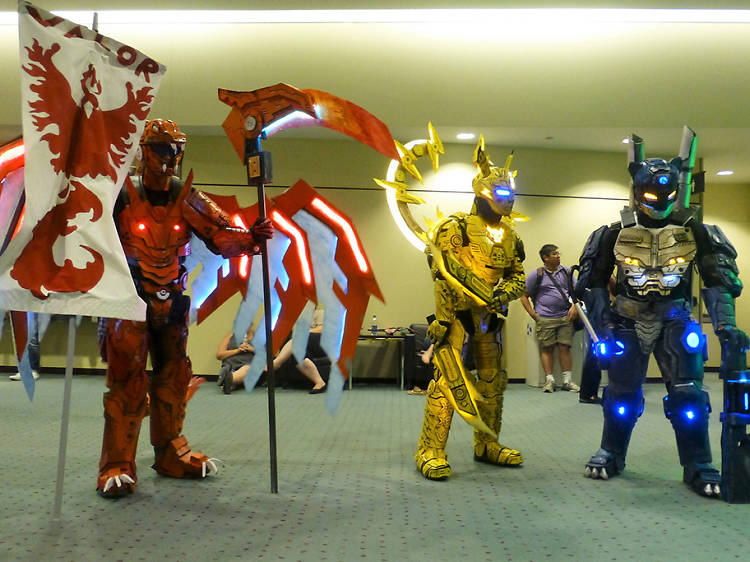 Comic book and sci-fi nerds alike count down to this event all year, which is basically Christmas for nerds. For aspiring (and actual) superheroes, Toronto ComiCon hosts a three-day celebration of nerdy subcultures including comics, graphic novels, sci-fi, anime and gaming. With over 400 exhibitors in a 15,000-square-foot space, this extravaganza brings out 25,000 fans, as well as cosplay characters and celebrities – so bring a selfie stick along for the fun ride. While there, don’t forget to check out artist alley to watch notable comic and graphic novel artists at work. You might even get to go home with an autograph from your favorite.

Toronto is a city full of artsy types who know how to host an arts and cultural festival like no other. The annual imagineNATIVE Film and Media Arts Festival is the world’s largest indigenous film and media arts festival. Launched in 2000, this five-day event showcases films, documentaries, music videos and art installations created by indigenous artists, directors and producers from Canada and abroad. The aim is to use art to create a better understanding and appreciation for indigenous cultures worldwide. The quality of the content is incredible, with many works winning critical acclaim and sparking discussions about social issues. You’re sure to leave this festival with some food for thought. 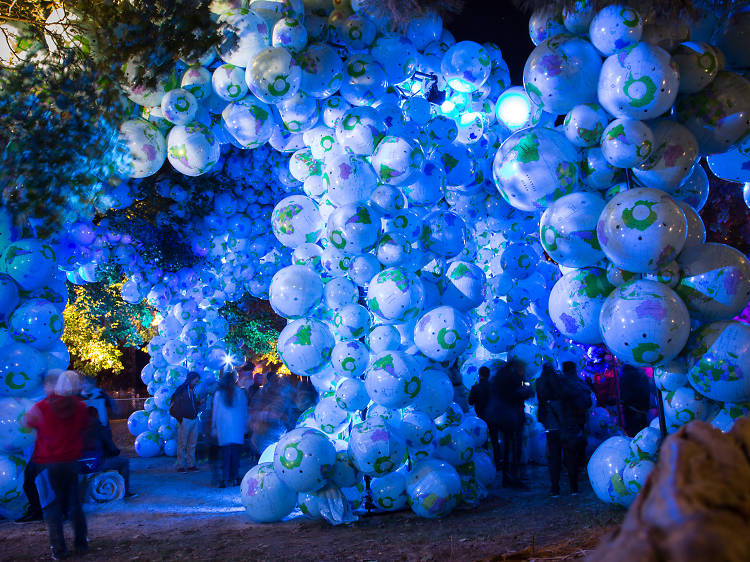 If you’re a night owl with a penchant for out-of-the-box art installations, crazy projections and life-sized sculptures, plan to attend Toronto’s Nuit Blanche. The free, all-night contemporary art extravaganza is a wild ride attracting spectators of all ages and backgrounds. For one evening, the streets are transformed into an open-air gallery, showcasing works erected in unexpected places around the city. Featured artists range from the upcoming and homegrown to internationally-known icons such as Ai Weiwei. From dusk until dawn, hop from site to site, viewing mind-boggling, bizarre, beautiful and provocative pieces, often involving music, lights, videos and sound loops. Wear comfy shoes because you’ll be doing a lot of walking.

Coming to town and need a place to stay? 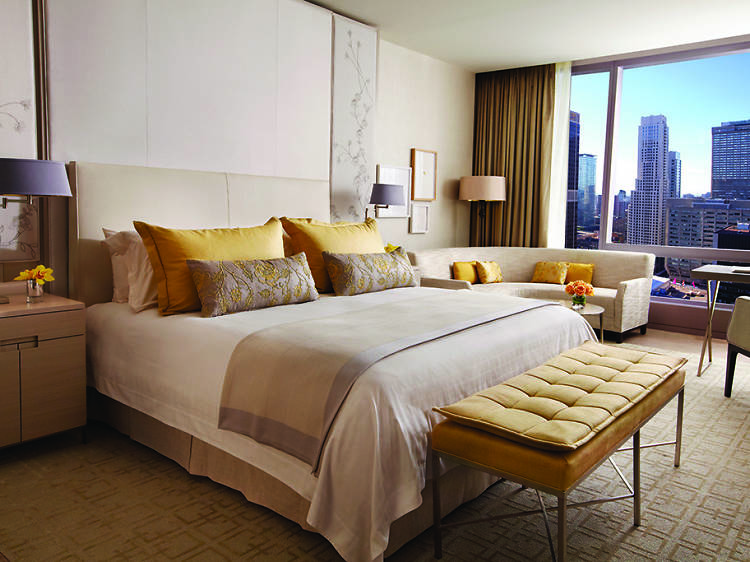 The 12 best hotels in Toronto

Whether you’re looking for a rooftop pool or rooms that feature art from local artists, you’ll have plenty of options to choose from.