Best pride festivals and parades in US to celebrate LGBTQ rights

Get your rainbow flag ready for the best pride festivals and parades in the US to celebrate LGBTQ rights.

Pride month is a good time, but it's so much more than a party. And the best pride festivals and parades in the US celebrate LGBTQ rights and history. Remember the Stonewall riots of 1969. Fed up with police raids on gay establishments, the queer community in New York City’s Greenwich Village, led by trans women of color, protested in the streets – and thus Pride was born.

Almost five decades later, Pride remains as important a social statement as ever. And this year's celebrations carry the double weight of representing a tentative step towards normality after the pandemic.

So, if you want to be part of that movement and you’re wondering where to head for the biggest LGBTQ parties of the year, and when, check out what’s happening in New York City, Los Angeles and other key cities across America.

Best pride festivals and parades in US to celebrate LGBTQ rights 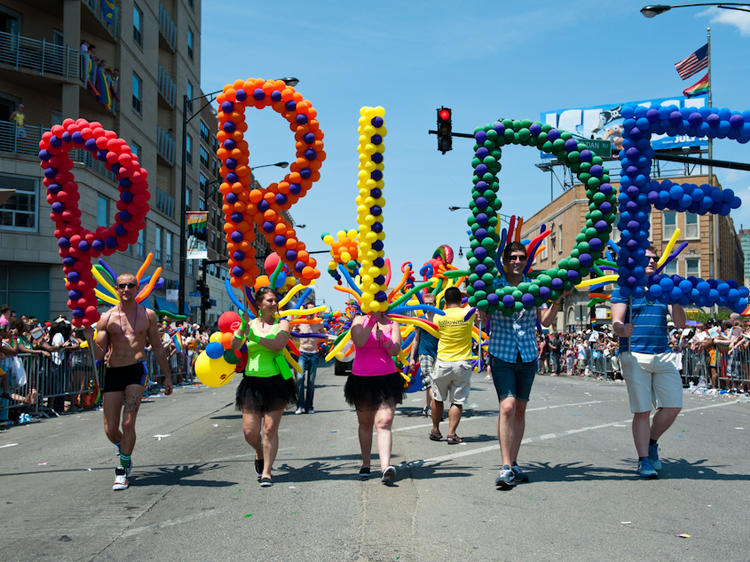 Chicago's Pride celebration consists of a full month of festivities and events, culminating with the annual Chicago Pride Parade, which traditionally takes place the last Sunday of June. The Pride festival takes place along North Halsted St. in the North Side neighborhood colloquially referred to a ‘Boystown’ the weekend prior to the parade. Pride in the Park, an outdoor music festival in Chicago’s historic Grant Park, made its debut in 2019. The coronavirus pandemic brought all those plans to a halt in 2020 and 2021, but it's back this year! 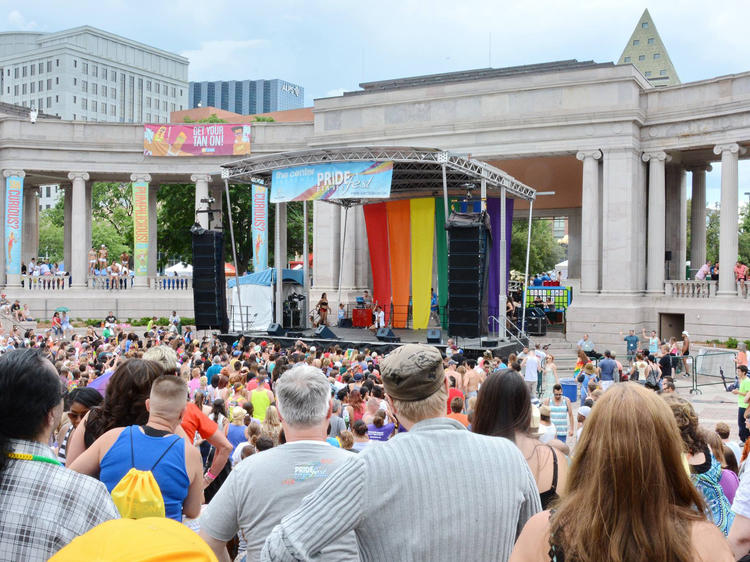 The Mile High City carves out a weekend in June for the Denver PrideFest, when over 350,000 celebrants come out to play. This year, renowned Cher impersonator Chad Michaels—also the winner of Season 1 of RuPaul’s Drag Race: All Stars—headlines the main stage on Saturday, June 17, and a variety of acts fill the U.S. Bank Latino Stage all weekend. Athletes can run the Big Gay 5K race and women can show their solidarity in the Dyke March, both on Saturday. The younger crowd (11–21) will find plenty to do in Rainbow Alley, a safe resource space that features a health and counseling center, games and even a drag closet. On any Sunday you can partake in the beer bust at the Denver Wrangler, an 18-year tradition that benefits local LGBT charities and sports teams. 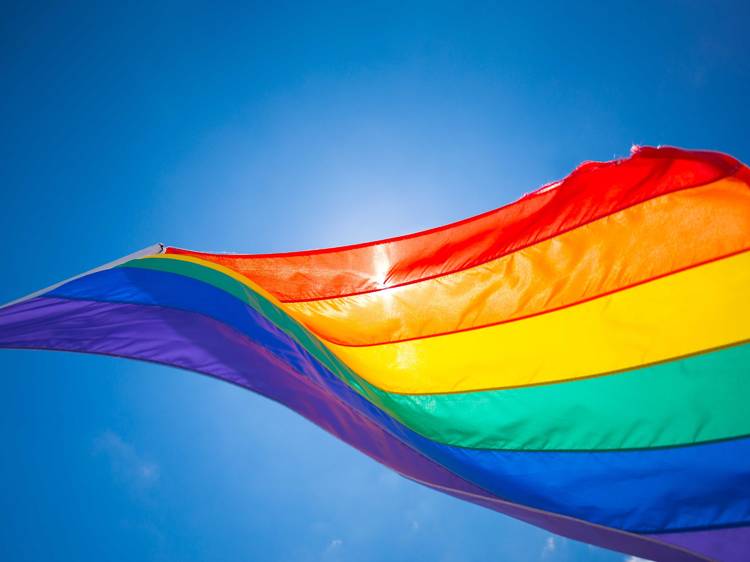 The 44th annual Houston LGBT+ Pride Celebration will take place downtown at Houston City Hall on Saturday, June 25. This year it's themed The Beat Goes On and this is Houston’s premiere event of the Pride season. (Due to pandemic protocols, these events were canceled in 2020 and downsized for 2021.) The festival runs from 1pm-6:30pm and the parade starts at 7pm and runs to 9:30pm. Register here to reserve a Celebration Festival and/or Parade spot or just to keep up to date with the latest announcements. 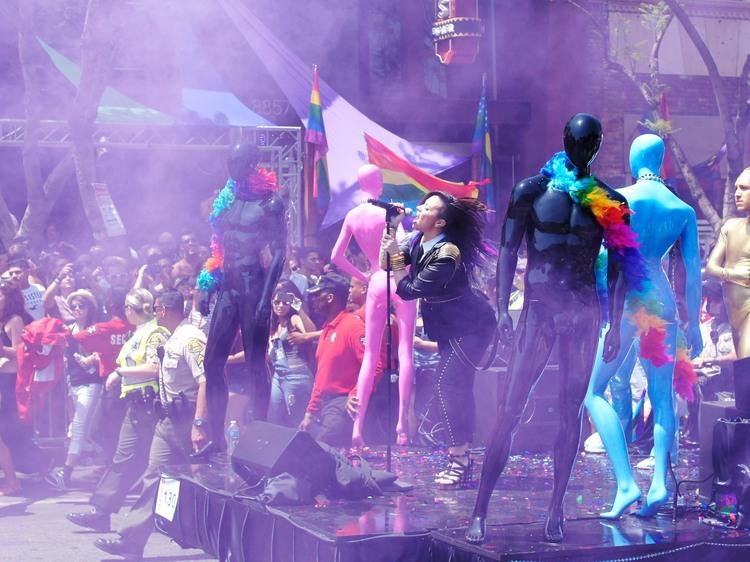 There is a ton of stuff happening around Los Angeles for this year's Gay Pride. The WeHo Pride LGBTQ Arts Festival showcase features in-person art exhibitions, music, comedy and poetry and is running from now through June 30. In Santa Monica, the free and family-friendly SaMo festival includes the return of the 'Miles of Pride' light installation, plus interactive artworks, an outdoor bazaar and a dance aerobics class. There are dotted around the Third Street Promenade and other area locations through June 30.

The 2022 LA Pride Parade annual procession gets back to its Hollywood roots—and routes—with colorful floats, festive marchers, live performers, classic cars and lots more. It will pass along Hollywood Blvd and Cahuenga Blvd, then west to Highland Ave, south to Sunset Blvd and finally east to Cahuenga Blvd on June 12, 10:30am. 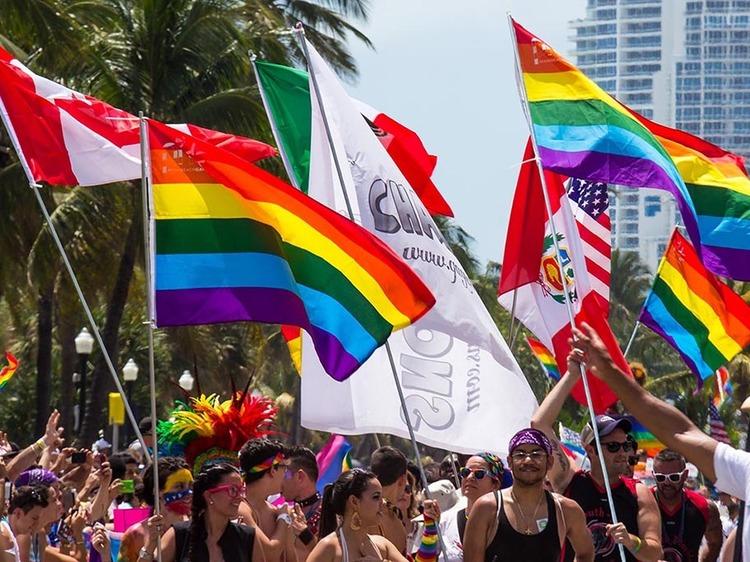 Miami might well be city with the biggest, proudest gay pride of all! Not only was there an entire month-long celebration in April, but it continues through June as well, when the whole country unites to honor the LGBTQ+ communities. There’s a lot going on this month, from the return of Wynwood Pride to epic drag brunches in Miami to diva-led bingo parties and drinks specials all in honor of Pride. One of the highlights is sure to be found at R House every Saturday and Sunday (11:30am, 2:30pm) and at Union Kitchen & Bar in Wilton Manors, following the city’s epic Stonewall Pride Parade and Street Festival on June 19. 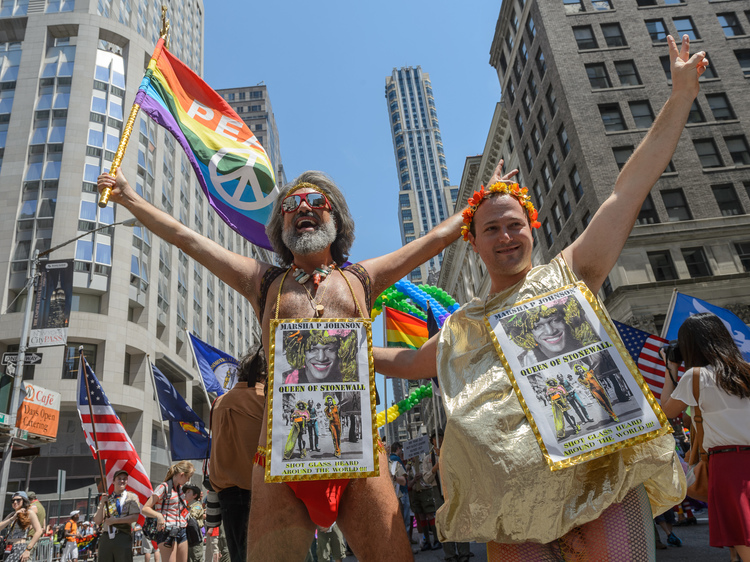 Pride celebrations descend upon New York City throughout the month of June, from family-friendly movie showings to late night dance parties, there will always be plenty of options within the City That Never Sleeps.

Celebrate Pride in the Bronx with NYC Parks on June 12 at 11am at Pelham Bay Park where you can learn about the history and significance of Orchard Beach within the LGBTQ+ community. Or spend the evening at the Rainbow Room in the Rockefeller Center on June 24 from 9pm to 2am at the Love Above All Ball, which will benefit Broadway Cares/Equity Fights AIDS.

The city’s Pride festivities return in full for the first time since 2019. The 53rd annual Pride March takes place on June 26, beginning at noon from 25th Street and Fifth Avenue. The procession will make its way to Chelsea, at 16th Street and Seventh Avenue. 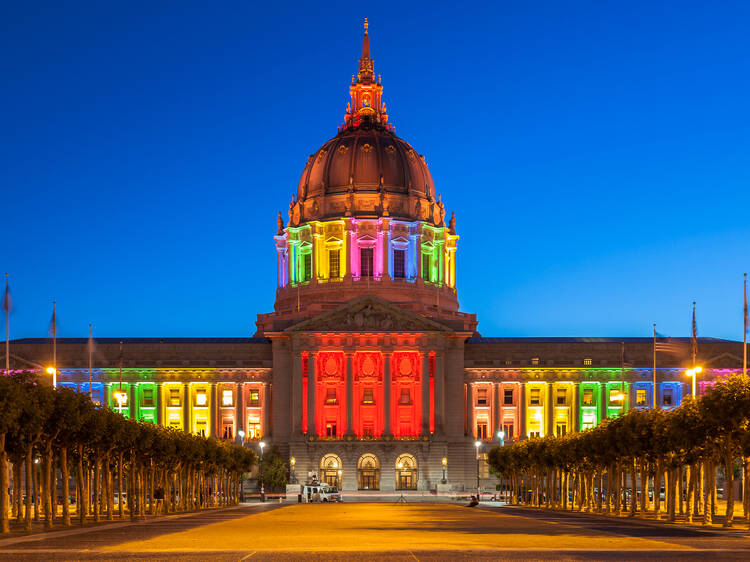 The city of San Francisco, as you'd expect and hope for, has a multitude of events planned for June; just about every like-minded bar, nightclub, museum and art gallery has something planned. However, the top draw, the main act, the big enchilada is the 52nd annual San Francisco Pride Parade. The Celebration rolls over two days, June 25 and 26 from 11am and the parade is on June 26 and begins at 10:30am local time. The Trans March is on June 24 and features a stage in the park with live entertainment from 3-6 pm, followed by a march downtown. With an afterparty at El Rio. 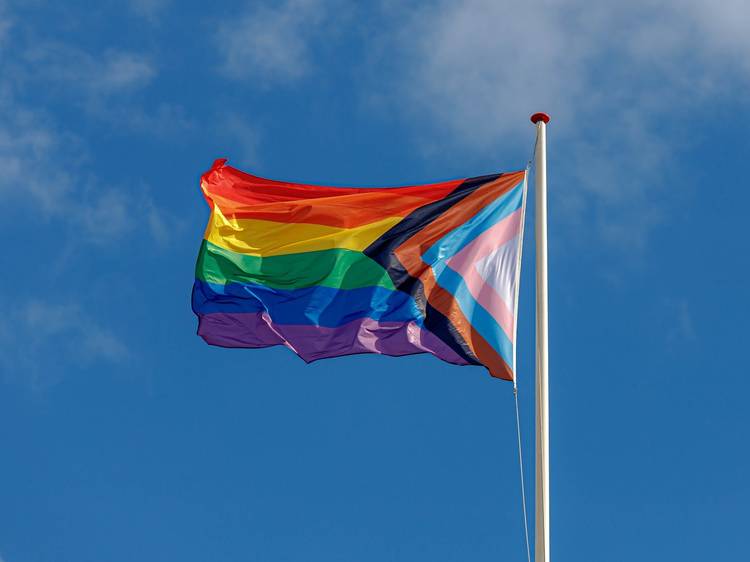 The Emerald City is not one to be left out. A whole host of events are planned for June, including the White Center’s Pride Street Party on June 11 that features all sorts of entertainment, over 50 vendors, plus six 21+ beverage gardens and more. Then there's the PrideFest on Capitol Hill on June 25 where you can fully expect performers, music, beer gardens and lots and lots of very happy people. And of course the Seattle Pride Parade on June 26 will be hard to miss as it fills up most of Downtown Seattle. In its 48th year, it’s going to be bigger than ever with all the high energy of people who want to party. There are hundreds of groups participating and it’s absolutely, positively going to be a day of all sorts of fun. 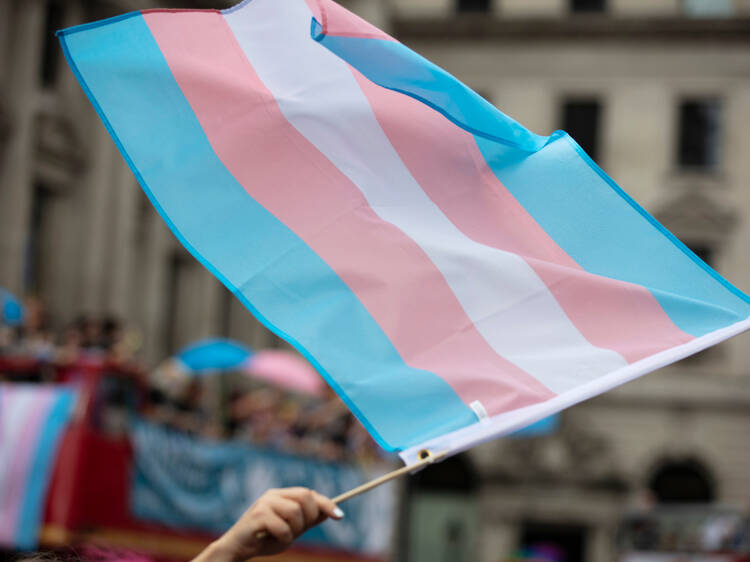 Texans celebrate Pride for an entire week in August in well-integrated Austin. This year’s festival will kick off on Saturday, August 10 at 11am at Fiesta Gardens on Jesse E. Sequoia Street. There will be more than 140 vendor booths on display, abundant food and drink options, and much more. Tickets will be available at the festival gates: $20 for adults, $10 for children ages 7-17, and free admission for children 6 and under.

The Austin Pride Parade will be held on the same day, from 8pm to 11pm. In keeping with its usual route, this year’s parade begins at the Texas State Capitol Building, with the march continuing down Congress Avenue and turning right onto 4th Street through the Warehouse District ending up at the rooftop at Austin’s popular gay bar, Rain. 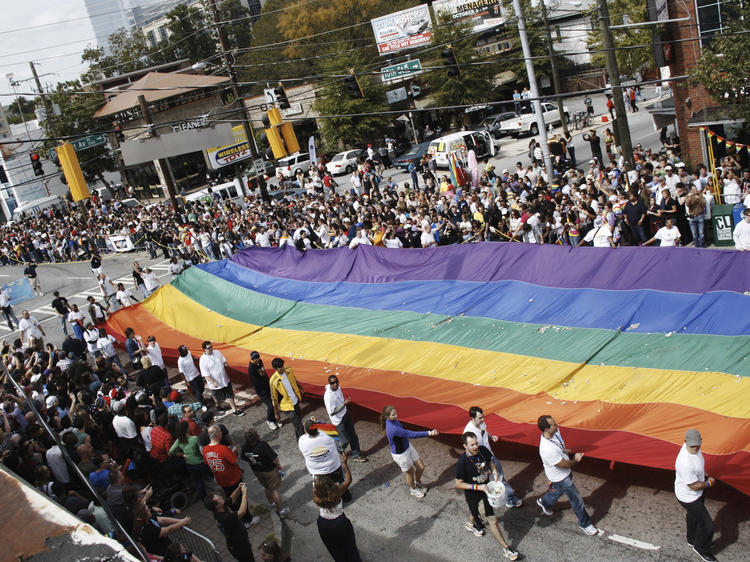 June sees a host of Pride-related events throughout the steamy southern city, but the real action in Hotlanta is tied to National Coming Out Day (NCOD) on October 11, with this year’s events going down the weekend of October 7-9. Atlanta Pride is the largest Pride event in the Southeast and one of the oldest in the country – the first march occurred in 1971. The huge public party (the crowd tops 200,000 people) is anchored in Piedmont Park just northeast of the downtown area. Head to the Old Fourth Ward and grab a beer (and the mic) at Sister Louisa’s Church of the Living Room and Ping-Pong Emporium for some full-on Southern gospel kitsch and organist-accompanied karaoke. 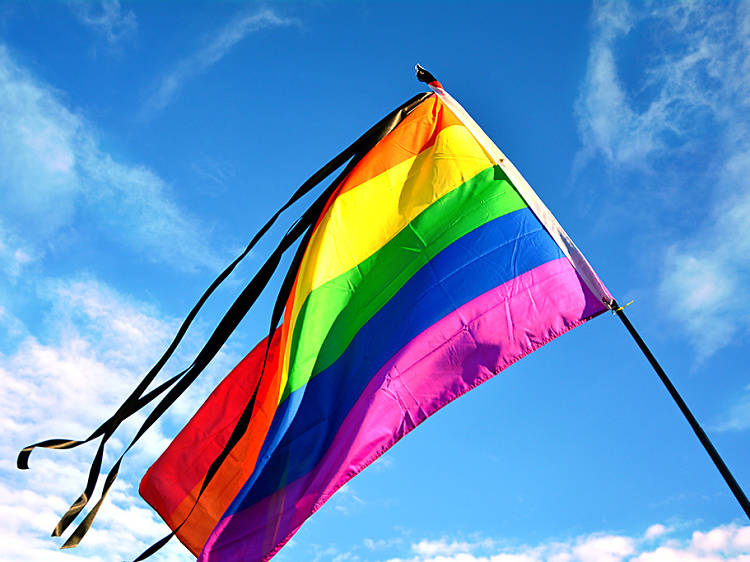 Orlando is doing things slightly differently this year. In addition to the events planned for the first week of June, thoughtfully, the city is allowing you to go and party somewhere else for the rest of the month (like Miami, for example) and then everything goes overboard in Orlando in October. The Pride celebrations kick off on October 10 and continue for a week. The Parade is on October 15 and starts at Lake Eola Park at 5pm local time.