Sagrada Família? La Rambla? Park Guëll? No – for most visitors, the top attraction in Barcelona is the weather, and with more than 300 days of sunny days a year and summers that are hot and humid, one of our favourite things to do is to take advantage of the city’s 4.5 kilometres of coastline, preferably with a dip in the Med. Whether you’re a keen tanner or you prefer to find a shady spot and doze – or indeed you’re into your beach games and water sports – in summer you could happily spend the whole day a la playa here and not go home until the middle of the night. Don’t know where to start? Our guide to the best Barcelona beaches has you covered. 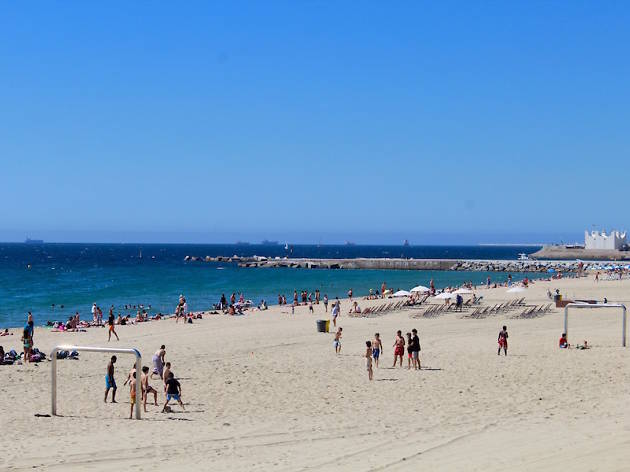 Bogatell Beach owes its name to an old stream that once ran from the uptown area of Vilapicina down the avenue of the same name all the way to the sea. The centre of Bogatell was home to fishermen who lived amidst the stench rising up from the municipal sewer that flowed into the sea here. Like most of the Barcelona coastline, the beach at Bogatell was completely overhauled during the 1980s and these days it’s one of the most popular. According to municipal studies, the average age of beach-goers at Bogatell is the oldest of all the beaches: 38. A good number (30 percent) are visitors to the city. 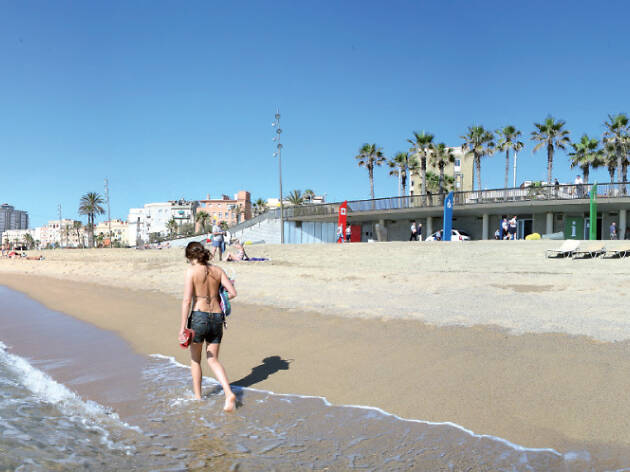 The beachfront of Ciutat Vella, next to the port, also includes what was historically known as Sant Miquel Beach, which corresponds to a large section of the coastline along the Barceloneta neighbourhood. We’re talking more than a kilometre of sand and sea, walking distance from the city centre, and a beach where locals and visitors come together. The part furthest to the south-west, at the foot of the W Hotel, provides a perfect view of the entire Barcelona coastline, from the three chimneys to the huge solar panel in the Fòrum grounds to the Olympic Port and Barceloneta Beach in between. The area in front of the swimming pools is an unofficial nudist beach, and there’s a gay area as well. In the mornings and around lunchtime, you’ll find lots of nightclub employees flexing muscles on this beach. 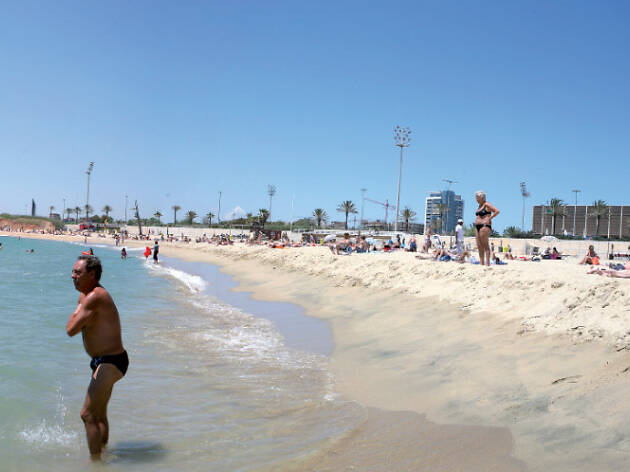 At the beginning of the 20th century, this part of the coast already had baths, the Baños de la Mar Bella, but eventually they were destroyed in a storm. At the time, the city’s residents held this strip of beach in high regard, but it fell on hard times in the middle of the last century. The coastal renewal process that began with the 1992 Olympic Games brought back the beaches of Mar Bella and Nova Mar Bella. The former combines two very different areas: a nudist beach at one end and a children’s playground (with a very original slide) at the other. You’ll also find young people playing football and volleyball. 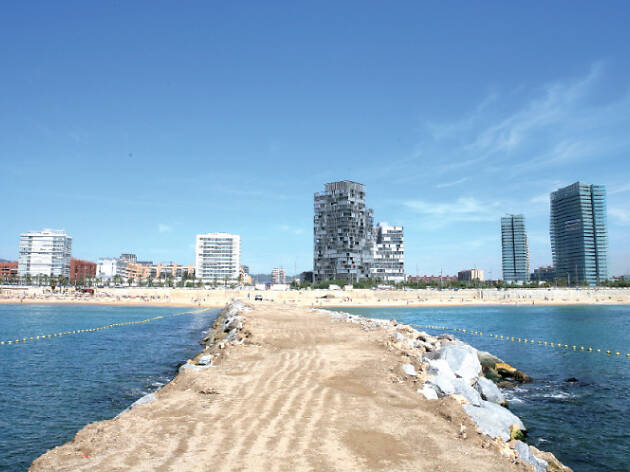 The name Mar Bella is a reference to the area that La Barceloneta is built on. A ‘marbella’, written as one word, is the name given to land reclaimed from the sea, such as the terrain providing the basis for this seaside neighbourhood. The name, split in two, was given to these two beaches. Nova Mar Bella is a favourite among women (60 percent of beach-goers) and young people. It’s the perfect beach if you or anyone in your group is disabled, because the walkways cross the sand all the way to the sea, plus volunteers are on hand to lend assistance, and there’s even a lift if needed. Keep in mind, however, that the service must be requested in advance at the information centre on the beach, and the disabled person must be accompanied by someone over the age of 18. 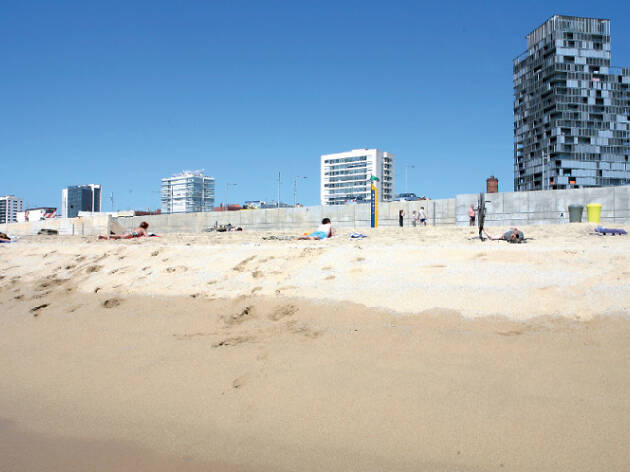 This beach was born following the removal of the cement blocks of the Prim breakwater, part of the transformation of the area now known as Diagonal Mar. Because it’s so new, Llevant is the one with the fewest facilities and services. But this also means Barcelona’s youngest beach is often the most relaxed and quiet. A big, open lot that doubles as a parking area makes it easy to access the beach by car. 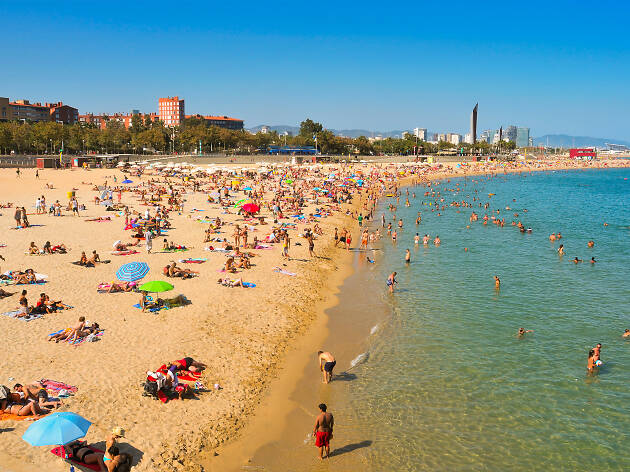 The 19th-century city planner Ildefons Cerdà had his own utopian dream of a city. He’d planned on calling it Icària like the ideal island imagined by the utopian-minded socialist Étienne Cabet. During the 19th century, several utopian followers of Cabet had settled along the old road leading to the Poblenou cemetery. The Olympic dream brought back this Nova Icària, or New Icaria, now one of the most popular beaches. It’s 400 metres in length and lies right in the middle of the Barcelona coastline. Along with Bogatell Beach, it’s one of the calmest. It also boasts the most services and has lots of leisure options. For decades, the area now occupied by the beach was known as Somorrostro, where thousands of families lived in improvised homes lacking even the most minimal amenities. The beach has erased almost every trace of its existence, but a nearby street honours the memory of Carmen Amaya, the legendary dancer who was born there. 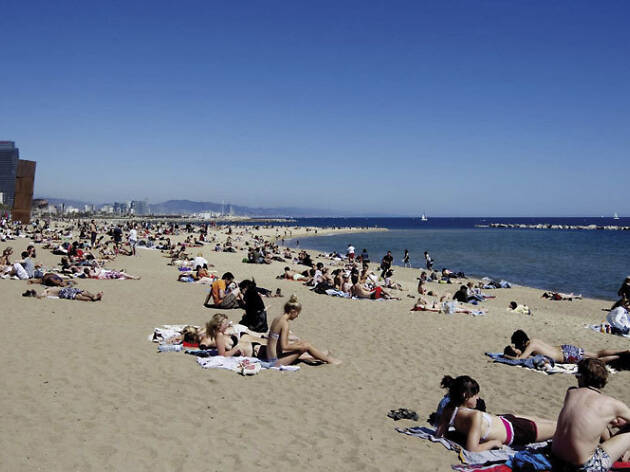 Barceloneta is the city’s most famous (and traditional) beach. It’s named after the seafaring neighbourhood par excellence, built during the 18th century by Barcelonans expelled from La Ribera in 1714. In addition to its maritime past, Barceloneta also had strong connections to the metallurgy and gas industries, which are still reflected in some of the names found in the area as well as by the Gas breakwater that divides the beach in two. The construction of the seafront promenade at the end of the last century connected this old neighbourhood with the Olympic Port. It also meant the loss of the popular beach bars where locals made paella on Sundays prior to the Olympic frenzy. These days you’ll find other types of restaurants and services in the area below the promenade. 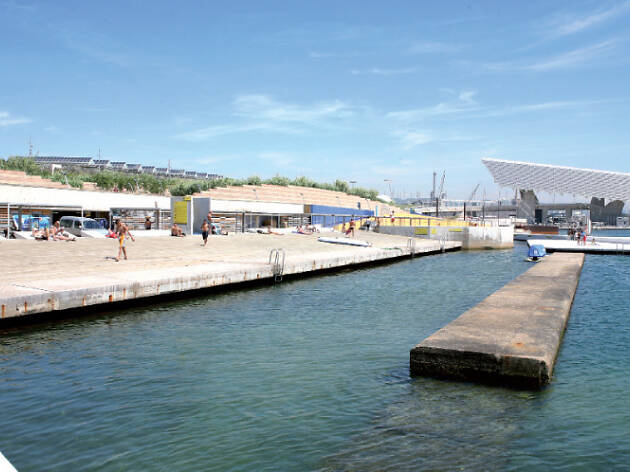 You can go and bathe at the Fòrum, but this isn’t a beach in the traditional sense. In fact, it’s a sandless space reclaimed from the sea by means of a cement structure. In the Fòrum baths area, a section of sea has been enclosed and tamed to create a large, shallow, saltwater pool. You might not know that under its layers of asphalt and cement, the Fòrum buried the Camp de la Bota, the name given to the seafront area between Barcelona and Sant Adrià that represents a tragic chapter in Catalan history. Under Franco, it served as an execution site for people who opposed the dictatorship. A memorial along the esplanade leading to the baths honours the more than 1,700 victims.

Looking for somewhere amazing to stay? 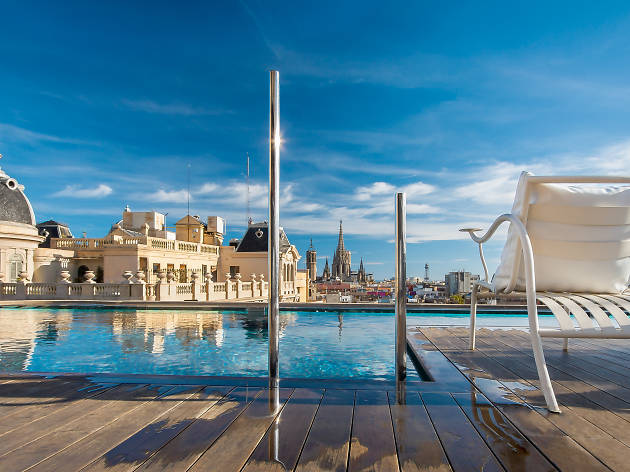 Beyond the tapas and the sights, getting the best hotel for you is the most important ingredient for having a top experience during your city break. We’ve chosen a selection of the very best hotels in Barcelona – notable for their stunning views, cultural programmes, idyllic pools and delicious food.